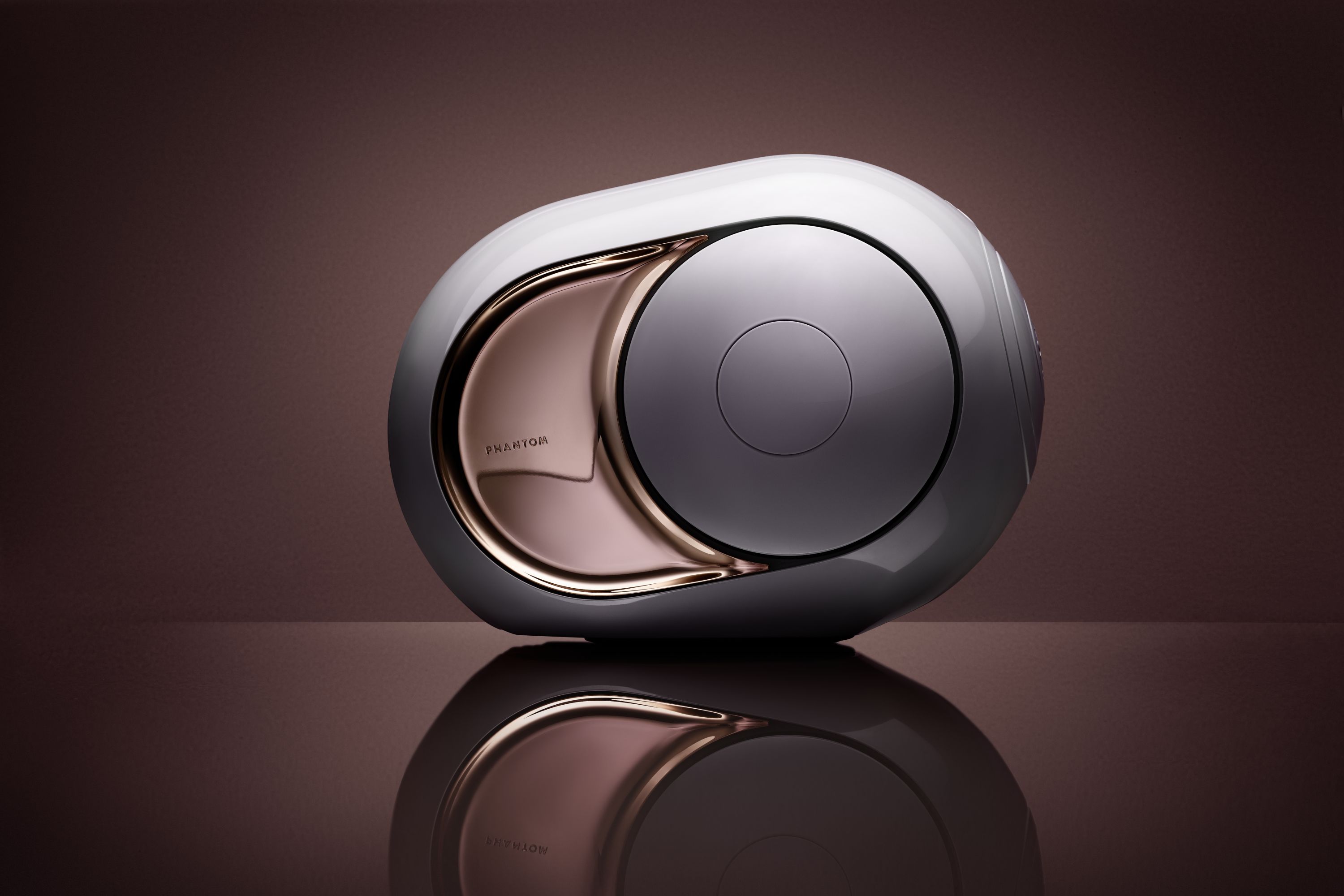 A private listening session with Devialet, the pinnacle of luxury sound tech

Gear
A private listening session with Devialet, the pinnacle of luxury sound tech
Share this article
Next article

Peek into any of Devialet’s five new showrooms in Hong Kong and you’ll be met with what look like curious, bowling-ball-sized orbs in various shades of chrome, gold and sparkling white. Appearing like gleaming, futuristic robots — think a cross between BB8 from Star Wars: The Force Awakens and Eve from Wall-E — these are in fact the French audio tech brand’s latest innovation: the Phantom all-in-one wireless speaker.

The super-luxe speaker is widely recognised by audiophiles as the finest wireless speaker that money can buy on the market today, mainly due to Devialet’s patented Analog Digital Hybrid (ADH) technology. Engineered by the brand’s co-founder Pierre-Emmanuel Calmel, ADH pairs the precision of analog sound and digital amplification to offer the purest sound in an energy-efficient way — without adding any noise, distortion or saturation — so what you hear is the exact sound you get from the recording.

Devialet’s groundbreaking success story started when it released its D-Premier high end audio amplifier seven years ago, which evolved to the current range of amplifiers, the Expert Pro. “To this day, it’s offering by far the best performance on the market,” says Julien Bergère, Devialet’s Asia-Pacific General Manager. “The lowest noise, the lowest distortion — any kind of measurable parameter, the Devialet Expert Pro offers performance that is up to 1,000 times better than any high end audio amplifier, regardless of their price or their size.”

“Our products are priced between HK$15,000 and 300,000. In four years, within this price point they have become the best sellers worldwide. This is due to our ADH amplification technology and a number of other patents in all fields of sound reproduction, including power supply, music streaming, digital to analog conversion, and sound processing,” says Bergère.

Devialet amplifiers are also the first to be able to adapt the music signal to the speakers you have at home. “Our engineers are not only developing our own products, but also characterising, measuring and developing computer models of how other products on the market are behaving, so that our amplifiers will not only provide the best amplified signal to the speaker, but even adapt this signal to the very characteristics of the speakers. It’s called SAM, or Speaker Active Matching,” says Bergère. “It’s like haute couture; it’s tailor-made amplification for your high end audio speakers.”

The French sound tech pioneer celebrates its 10th anniversary this year and is enjoying a rapid expansion across Asia with eight openings scheduled for 2017. This includes five locations opened this year in Hong Kong: the flagship at ifc mall, a Harbour City location, a pop-up Immersive Showroom at Festival Walk, a VIP private lounge at Lee Gardens in Causeway Bay, and most recently, another Immersive Showroom pop-up at New Town Plaza.

Sitting in the middle of the vast VIP lounge during a demo session, we were absolutely floored by the precise and crystal clear sound of Devialet. As the speakers played the widely-audiophile-approved live recording of “Hotel California,” it felt as if we were standing in the midst of a very passionate crowd with the Eagles singing and playing directly at us — instead of the two generic tower speakers powered by an Expert Pro.

We were even truly spooked when watching scenes from The Mummy (yes, the Tom Cruise one), surrounded by seven Phantom speakers to experience the 7.7 surround sound system. We imagine having the flawless audio experience in the comfort of your own home could almost beat going out to the movies, which makes it hard not to want to bring the entire setup home with you at the end of the day — we’ll gladly take seven Phantoms, please.

As Devialet continues to take the world by storm, European customers will soon get to enjoy the SkySoundbox, a new all-in-one sound system created in collaboration with satellite broadcaster SkyTV that’s due to launch in October. At the same time, in Hong Kong, Devialet has announced a unique partnership with Grand Hyatt Hong Kong’s Plateau Spa this September, offering one-of-a-kind therapeutic sound experiences. For one more way to experience the Rolls-Royce of audio, we simply cannot wait.