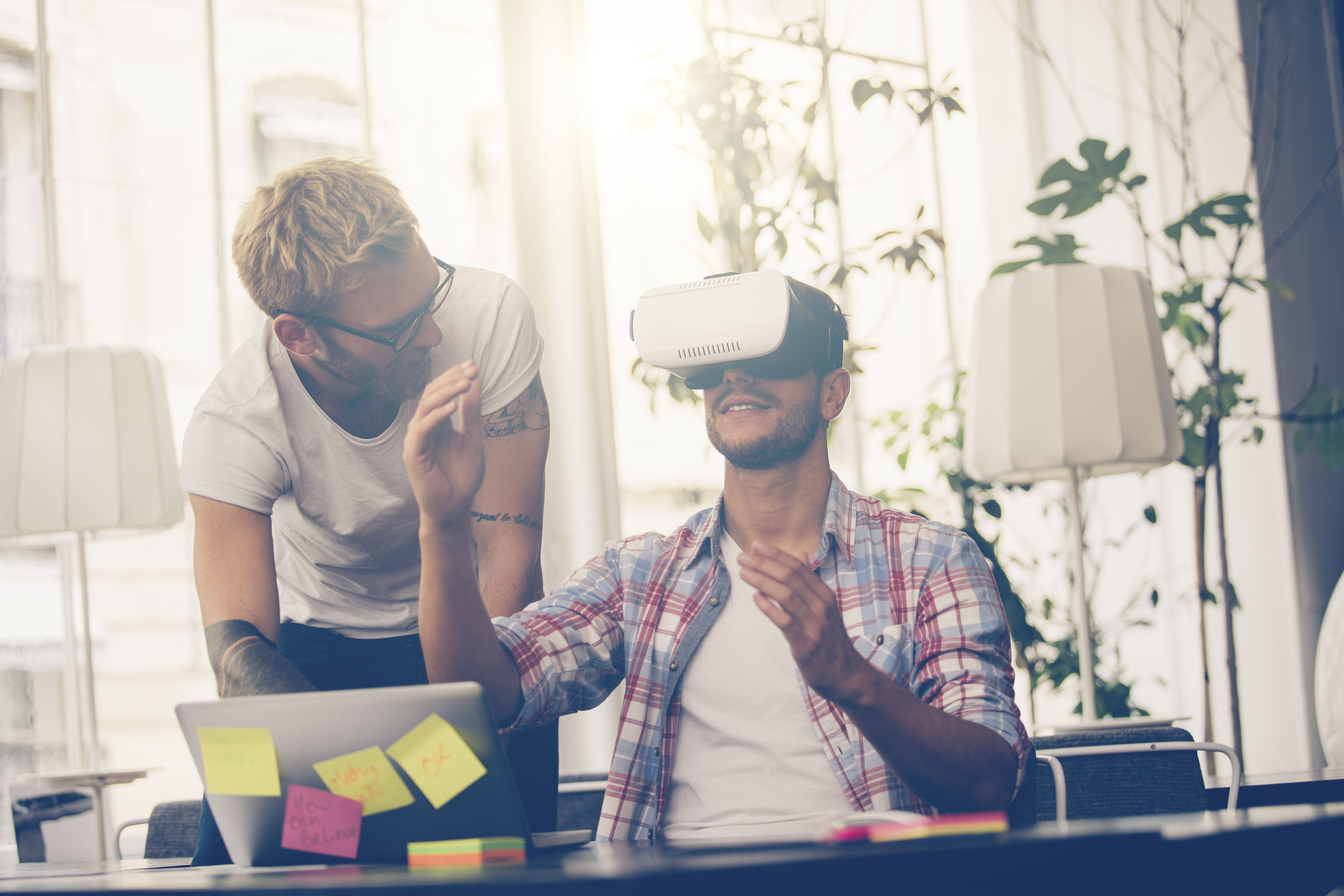 The state of virtual reality in 2018

Steven Spielberg’s vision of a dystopian future is one where virtual reality reigns supreme. In his spring blockbuster Ready Player One, citizens of the world log on daily to a simulation called the Oasis by means of virtual reality.

The two-hour adaption of the eponymous book was a dizzying yet electrifying tale that put virtual reality in the spotlight. Its characters fought virtual battles with their avatars, while others browsed through humongous libraries with archives dating back to millennia ago. Ultimately, the movie depicted a probable future of the technology.

“People come to the Oasis because of all the things they can do. But they stay because of all the things they can be,” declared Wade Watts, the film’s protagonist. That goosebump-inducing statement got us all excited. Yet when we stepped out of the cinema, the bleakness of reality hit us hard. There was no Oasis waiting for us when we got back home.

Let’s get this out of the way: Virtual reality has been a flop. The buzz and hype surrounding it for the past few years have been nothing but smoke and mirrors. Sure, there are more than enough headsets available on the market now. But what good does that do when consumers buying the tech don’t know what they can do with it?

It’s disappointing given the endless potentials for virtual reality. Gamers are given a new dimension of immersion. Doctors-in-training no longer need to practise on a cadaver. Filmmakers can finally break the fourth wall.

Yet, virtual reality has always just teetered on the edge of mass consumption. The tech crowd touted 2016 as the “Year of VR”, but as we all know, that never happened. Then they said it was 2017, where despite selling more than a million units in the third quarter of the year, there wasn’t the predicted breakthrough. Comparatively, Apple sold more than 77 million iPhones in the first quarter of 2018.

So when we rang in 2018, the industry decided to fire up its thrusters. The Consumer Electronics Show (CES) that happened in January saw a sizeable offering of new virtual reality headsets. Locally, there was MeshMinds 1.0, an exhibition that blurred the lines between technology and art with a few demonstrations using virtual reality.

With so much happening in the first quarter of 2018 alone, we can’t help but wonder: Is 2018 finally the year for virtual reality to step out of its shadow? We sat down with some industry insiders and picked their brains.

Fighting an uphill battle
Virtual reality has come a long way since its first iteration as a stereoscope. Those days, the user could only see one image at a time. Fast forward a century, and now there is a VR headset boasting a resolution of 8K and a 200-degree field of vision. Times have changed, but not nearly enough.

“Virtual reality still has some hurdles to overcome,” said Ian Gregory, co-founder and creative director of local game developers Witching Hour Studios. The first thing virtual reality creators have to tackle is the prices. The better a headset, the more expensive they get, and not in a luxurious way. No one wants to drop a couple of hundreds on a device they’ll hardly use outside home.

The next obstacle is its comfort. “Can you imagine sitting through a two-hour film with a headset?” asked Serena Gan, creative producer at Disney Digital Network. The Cannes Film Festival in 2017 had a virtual reality entry, Carne y Arena. Directed by Alejandro González Iñárritu, the film explored the plight of immigrants and refugees trying to cross the Mexican border into the United States. It was awarded the first Special Achievement Academy Award in over 20 years, the last being Pixar’s Toy Story in 1995.

Carne y Arena was six and a half minutes long. That’s shorter than the length of the trailers that come before a movie in the cinemas.

Kay Vasey, one of the founders of MeshMinds, agrees with Gan. “At the moment, we’re going to have to err on the side of no more than 10 to 15 minutes for content.” Any longer and fatigue will set in. Your eyes will get tired, and the urge to take the headset off increases exponentially. If creators want their audience to experience a change in environment, like diving into the sea, proper testing has to be done to ensure the sensation of drowning doesn’t set in. No one wants to get aquaphobia, especially not from a virtual reality device.

Then, there is the accessibility. “Virtual reality is an immersive experience, and it’s not something easy to access,” said Gan. “It isn’t like AR where you just download an app and you can immediately start using it.” There’s a lot of truth in that statement. Remember Pokémon Go? Its meteoric rise to success can be credited to its ease of use. You are able to play the game immediately after downloading it onto your phone. There is no need for a headset or cumbersome wires.

Countries without the proper infrastructure will also not be able to handle the kind of volume needed to load something in virtual reality. A 360-degree video, like the ones often appearing on our Facebook feeds, could measure anywhere from 1GB to 10GB of data. You mean this five-minute video will take me a day to download? Thanks, but no thanks. No one wants to travel back in time to the days of a dial-up Internet connection.

Which leads to the biggest crux of why virtual reality has yet to explode: Content.

Content is king
“We need content because no one is going to buy these headsets if there is nothing to play on them,” said Vasey. That was a sentiment echoed across the board. Ashima Thomas, CEO of Singapore VR studio Warrior9 and head of the AsiaVR Association has also met people who are frustrated with the lack of content across the virtual reality platforms. “One thing they always say to me is that there is nothing to watch. So they have it, but they don’t know what to do with it.”

André Wee, a visual artist, thinks that the lack of content might be due to the low adoption rate of virtual reality by content creators. “There’s a lot of resistance to change, especially change that happens too quickly,” he said. Plus, the fact that most of the content on virtual reality platforms are only surface-scratching doesn’t help sell it.

“If I can watch a movie without VR, why should I invest in it?” said Gregory. That is the painful truth that plagues the virtual reality market right now. There’s also no catalyst at the moment to propel it forward into the mainstream. Personal computers had Windows, and the smartphone had Apple. Virtual reality might have Oculus, HTC, and Lenovo championing its cause, but it’s still missing the depth other platforms have. “Virtual reality is so content-based, and it doesn’t contribute to a person’s daily necessity,” said Gan. “It’s not a product people will just buy.’

Is it just a gimmick that will only stay on the fringe? For now, virtual reality seems like the prodigal athlete that spent its entire season on the bench. When can it finally step into the limelight and score a goal?

Remedies to the malady
For starters, the price of virtual reality has to go down, and not just for the sake of the consumer. “Producing virtual reality is not cheap. You can’t film and cut raw footage from an iPhone and use that,” said Vasey. As with any new technology, the more it’s done by people, the cheaper it’ll get.

“Major investment is needed from private and public sources to really exploit its potential,” said Gregory. That is already starting to take shape. During the Asia TV Forum in November 2017, Senior Minister of State for Communications and Information and Health Chee Hong Tat underlined the growing importance of virtual reality and announced two upcoming VR films that will be produced by local companies.

As the adoption rate of virtual reality goes up, it will also force developers to innovate their headset designs and make them more comfortable. The above-mentioned VR headset with 8K resolution might seem cool, but its bulkiness will surely turn the masses away. “Headsets need to get less intrusive for people to use. It’s a lot to pull out something and put it on your face,” said Thomas.

The biggest change will have to come from content creators themselves. Recognition of content like Carne y Arena is what virtual reality needs. The short film condensed a riveting story into bite-sized pieces that viewers could immediately and easily digest. A shorter time also means more people can interact with the virtual reality content, be it games or films.

Localised content will also be a key draw for virtual reality. While people are still interested in Mickey Mouse, an audience in Hong Kong might prefer to see him eating noodles, said Vasey. For the Asian audience, seeing the ruins of Pompeii from the comfort of their home would wow them. But being able to dine with the world’s most famous mouse at a dai pai dong (an outdoor street food stall) would be a dream come true. That is the goal of virtual reality, isn’t it? To fulfil the fantasies otherwise limited by our very boring, basic lives.

So back to the question: Will virtual reality finally take off in 2018?

No, at least not in its current form. Virtual reality is still very much a novelty, according to Thomas. But she is holding out hope that the tipping point is coming soon. “I want to say that by this time next year, it’s not a gimmick to people,” she said. “Until those types of mindsets change, it’ll still be in the realm of not being mainstream.”

Even when virtual reality finally finds its footing, it will always have its limitations. You won’t be able to munch on that juicy medium-rare Kobe steak and feel the juice run down your lips. You can’t taste the sweet golden nectar from a vintage bottle of Krug. And you certainly will not be able to feel the gentle breeze that begets the start of spring.

Virtual reality will forever be just an escape from reality. “As terrifying and painful as reality can be, it’s also the only place where you can find true happiness,” said James Halliday, the prodigal genius who created the aforementioned Oasis in Ready Player One. Maybe one day when our neuroses can be stimulated on a level more than just visual. But that day is not today. Certainly not 2018.

Tech Virtual Reality technology trends state of virtual reality ready player one steven spielberg carne y arena
Josiah Neo
Writer
Josiah Neo is a tech writer who contributes occasionally to the fashion, travel, and culture beats. When he’s not busy keeping up with the keynotes, he’s probably stuffing his face with the best Melbournian donuts (at Shortstop, BTW) or watching his favourite esports team, the Los Angeles Valiant, pummel their opponents into oblivion.
Technology Travel Fashion Culture
Sign up for our newsletters to have the latest stories delivered straight to your inbox every week.