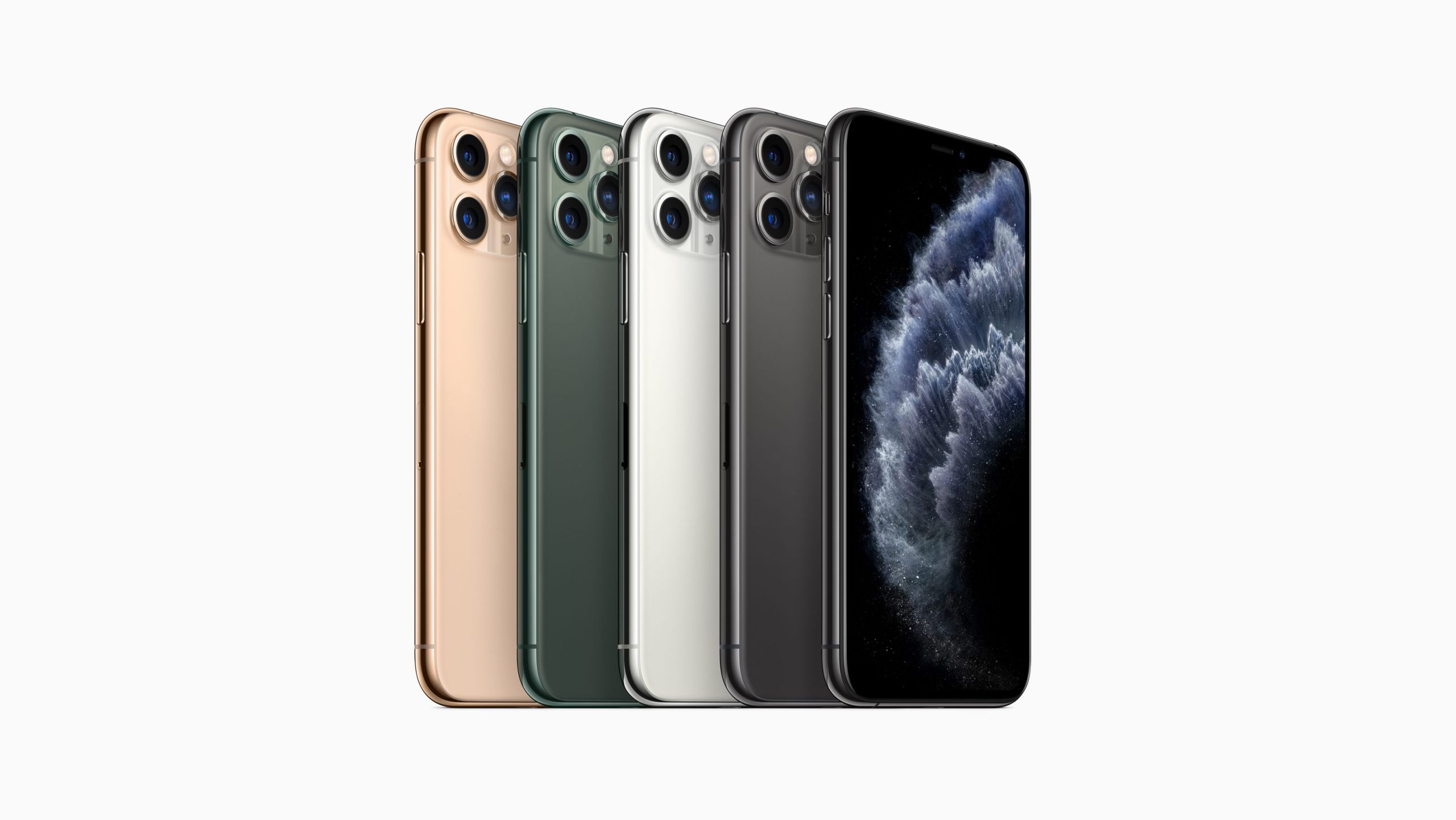 Gear
Which iPhone 11 should you get? A hands-on first look at the 11, 11 Pro and 11 Pro Max
Share this article
Next article

Hardcore Apple fanatics are likely already sold on the new iPhone 11 series: Apple’s latest big release once again boasts groundbreaking camera capabilities, screen quality and improved battery life, and better water resistance. But how stunning exactly are the new cameras? Is it worth spending more for the three camera lenses in the Pro models or sticking to two in the base model? For those still on the fence about which of the latest iPhones to get, we’ve compared each of the newest models plus their predecessor to determine which is your best fit. We checked out the new iPhone 11 in Purple, the 11 Pro in Midnight Green, and 11 Pro Max in Gold.

The iPhone 11 Pro and Pro Max feature an attractive matte glass and stainless steel backing, which takes care of the ubiquitous fingerprint marks and lack of grip with the glass/aluminium surface of their predecessors. The 11, however, retains the same glass back. It’s more slippery, which will tempt you to buy a phone grip or a protective case whereas I’m more inclined to keep the 11 Pro as is.

They’re a lot more colourful this time round, too, with vibrant pastels and Product(Red) colourways for the 11 and more sophisticated hues for the 11 Pro. The Midnight Green hero colour, for me, is particularly stunning.

The 11 Pro, 11 and 11 Pro Max are essentially small, medium and large sizes, respectively, with the 11 just a hair clunkier at 8.3mm thick instead of the 8.1mm of the Pro models. I currently own the previous model, Xs Max and I use it with a phone grip — I need it in order to text or snap photos one-handed. Without any accessories, the 11 Pro feels the most comfortable in my hand, though the screen size feels a bit lacking.

Apple introduced water resistant phones with the iPhone 7, and the new releases are all rated IP68, with the 11 able to survive a maximum depth of 2 metres of water for 30 minutes, while the Pro can withstand 4 metres. Poolside splashes, bar spills are all immune to the new iPhone and more. That said, you shouldn’t take your Pro down for an underwater photo — unless you want to foot a massive water damage bill that is.

The 11 touts ‘all-day battery’, but isn’t that to be expected? To give an idea of its real capabilities, the 11 gives up to 17 hours of non-stop video playback on a full charge, while the Pro gives 18, and the Pro Max gives up to 20. That’s an unhealthy amount of Netflix binging, to be fair, but now you’re definitely able to take full advantage of the updated display. When we had a go with the phones with sparse usage (under an hour a day of photo- and video-taking, internet scrolling and mucking about with Siri), a single battery charge lasted us up to three days.

In comparison with my Xs Max which is just a few months old, I use it mainly for Instagram and texting throughout the day and I can get by without a charge overnight if need be, usually ending up in automatic low battery mode below 20% by the next morning.

Unless you’re an A/V geek, the brighter and richer displays of the new generation iPhone might not look all that different: The Super Retina HD OLED display from the previous Xs and Xs Max has now upgraded to an Super Retina XDR OLED display for the 11 Pro and Pro Max. Notably, its contrast ratio has doubled from 1,000,000:1 to now 2,000,000:1, meaning all those shadows and highlights are all the more richer.

For the 11 however, it’s taken a back seat with a Liquid Retina HD LCD display, which only has a 1400:1 contrast ratio. Compared side by side, the colours definitely look more muted and grey in the 11, but on its own, the difference is barely noticeable.

Aside from binging shows on your commute, getting stuck in an endless YouTube loop at 2am, or trying to show off videos of your child or pet to your neighbour, there’s rarely ever the chance you would need a top quality cinematic experience from your phone — but I was truly given this chance last weekend when my laptop coincidentally refused to load up HBO series Chernobyl. I felt the quality of the show could only be justified by the vibrancy and size of the 11 Pro Max display — any smaller would feel tiring to watch. The bleakness of the Soviet nuclear disaster drama was also rendered exquisitely heart-wrenching by the phone’s new spatial audio (and Dolby Atmos supported) speakers. With the 11, even the dreary forsaken landscape of Ukraine in certain scenes felt just slightly flatter and duller, and not in a good way.

The new iPhone camera arguably comes out on top once again as the best phone camera on the market. Without a doubt, the largest draw for most people to upgrade to the 11 series would be the new Ultra Wide camera lens, which allows you to capture more of the scenery in front of you without stepping back, as well as snapping more of the environment in tight spaces. I enjoy getting to easily toggle between Ultra Wide lens to regular Wide to close up Telephoto lens with a mere tap of a button on the camera app. The frame of the camera app also used to be a black void, which has been replaced with the ‘immersive camera frame’ — a translucent background that allows you to see the full picture and hence frame your shot better. With video, having Ultra Wide lens means that you are now able to gradually pan outwards as well as zoom in, which offers plenty of opportunity for novel storytelling.

You’re now able to shoot video in photo mode by simply pressing down on the button just like in Instagram and Facebook Stories, and lock the recorder in place with a right swipe. The older Burst mode is now done by holding down and swiping to the left. This is especially handy, given all the missed opportunities for video (there are plenty of examples, but think of all those meals where they artfully pour sauce on your plate that you wanted to capture in motion rather than static photograph — these moments are forgotten no more).

There’s also (finally!) more sophisticated editing for videos on your camera roll: you can now edit the footage, flip, rotate and crop videos and even change the lighting and add filters just as you can with regular photos.

With static photography — the 11th generation has introduced Night mode, which has been applauded as one of the new phones’ best features. Night mode comes on automatically in dark environments, telling you to hold still while collecting multiple shots across a few seconds in order to fuse them together while reducing blur and noise. This is a revolutionary addition given iPhone’s poor reputation for photography in dimly lit environments. This has definitely upgraded to stellar results — though I found it to be mostly useful only in truly dark scenes, faring better indoors, while difficult to play with in well-lit Hong Kong streets. If you’re trying to capture the drama of the city’s neon lights or the skyscrapers coming alive in the evening, Night mode won’t exactly give you the artistic shot you want simply because Hong Kong is just too bright; street lamps and traffic lights just end up giving a ton of glare. Perhaps more related to the difference in display quality, the 11 also seemed to capture photos that subtly lack the depth and darkness of 11 Pro and Pro Max.

Portrait mode has also been enhanced with new high key monochrome modes that attempt to mimic studio-shot black-and-white photos, but I felt that the edges of your subject were very obviously artificially blurred. The modes also seem to only work on people and not objects or pets.

And yes, even the self-facing camera has been improved with a 12MP TrueDepth camera, while the Xs and Xs Max only had 7MP. No more blurry selfies, and you can zoom out to a wider lens, though it’s just toggling between two predetermined depths. There’s unfortunately no wide lens mode in selfie video, just photographs. One cool feature that’s worth playing with is the new ‘slofie’ — or slow motion selfie. The older slow motion mode has been made available for the self-facing camera, allowing you to take 4K videos of yourself with a touch of melodrama — every bat of the eyelash, fold of the eyelid, every chapped lip is more apparent and more high-def than ever (which might make us more self-conscious than ever), and with more balanced colours.

The new iOS 13 that comes with the new generation of iPhones poses quite a number of upgrades, from the comfortable new dark mode to a new look for the volume bar to the aforementioned Portrait shot effects, but a few key changes genuinely have us excited. One of my previous gripes was the way it was tedious to scroll through and organise photos, but now you can zoom in and out of the grid as you browse to quickly spot what you’re looking for. The look and feel of the photos are now more user-friendly, showcasing the best moments from each year, month and day. Other updates to look forward to include a single-hand-friendly ‘swipe to type’ keyboard, a revamped Maps with the ability to save locations in collections, and smarter reminders — you can now set a reminder for when you are chatting with somebody on the messaging app. Siri gets a much bigger role as well with the new addition of Shortcuts, which is essentially the ability to program any action on your phone — then tell Siri to do it.

As is expected of Apple, the new generation of iPhones exceeds expectations once again — in some cases addressing functional problems such as photo-taking, while other changes are not quite visible to the general user. As for which one to get? If you’re going to be binging shows during your commute, get the 11 Pro Max. If you want a pocket-friendly upgrade, definitely go for the 11. Always angling for a quick draw camera shot? You’ll want your phone to be compact, well-rounded with excellent speed and camera capabilities, so the 11 Pro is your best bet.

Apple iPhone smartphones iphone 11
Evelyn Lok
Associate Editor
When not trying out the latest beauty and wellness trends, Evelyn is likely enjoying a perfectly balanced negroni or exploring some of Hong Kong's best new places to eat and drink. At Lifestyle Asia she covers everything from the biggest events in town to interviews with Hong Kong specialists, with topics spanning art, food and drink, health, tech, and travel.
Beauty Wellness Culture Events Art Drinks Tech