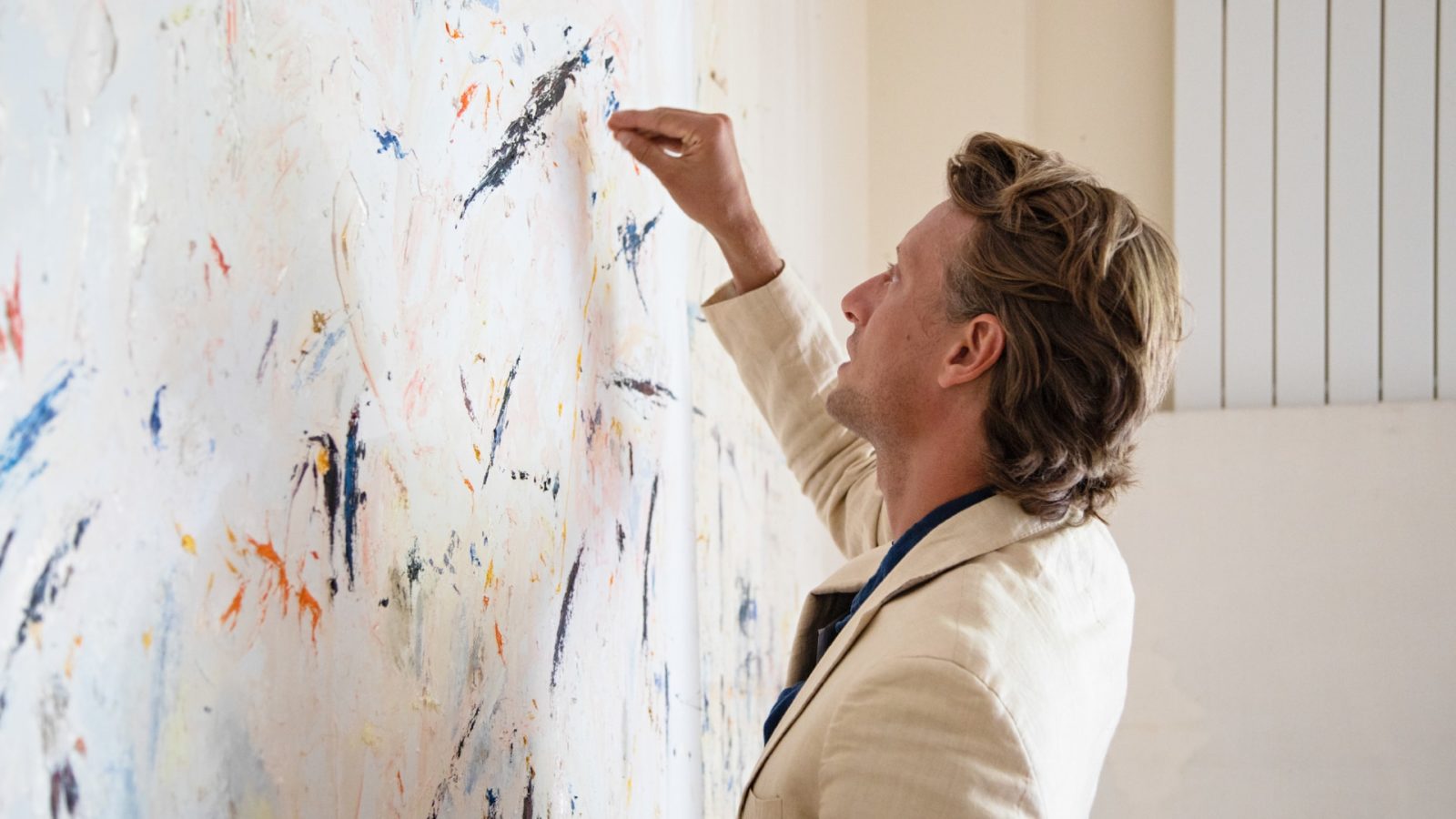 Whereas others strive to avoid it, Arthur de Villepin wants “to be best friends with chaos.” The charming Frenchman has always been known as a passionate art collector and entrepreneur, but his curious decision to add ‘gallery owner’ to his resumé at the peak of the pandemic reaffirms his philosophical belief in the beauty of breaking routines, simply calling it ‘a journey which has been completed differently.’

Much of this decision may be rooted in his love of Hong Kong. As our vibrant city continues to be cast with an abject uncertainty that may paralyse any enterprising spirit, de Villepin has chosen to thrive through it, launching an exquisite three-story gallery in Central appropriately named ‘Villepin’ in March. His commitment to root himself in Hong Kong — and calling this dynamic place home — is a testament to the resilience he identifies with in the city’s people and energy.

The fruit of a highly anticipated partnership between himself and his father, former French Prime Minister Dominique de Villepin, the elegant gallery is a reflection of the family’s shared support of the arts, longstanding patronage of talent from Asia itself, and de Villepin’s complete trust in his son.

It captures the precarious atmosphere felt by artists in France after Paris’s liberation from the German Troops in World War II — a feeling of unease that can be comparable to the unsettled nature we experience now globally as we reel from wave after wave of the pandemic. This surprising parallel speaks to arts’ ability to transcend both border and generation, a beautiful coincidence that aligns with the younger de Villepin’s appreciation for the important international dialogue that he believes art creates.

His own multi-cultural background — having been born in America and raised in India, France, and a slew of other global destinations due to his father’s political career — has led to an immensely introspective outlook, bolstered by an admiration for his family and self-proclaimed ‘sensitive mind’ as the 27 replies below will reveal. Belying de Villepin’s approachable personality is a highly reflective person, making each answer a careful thought exercise which unveils an even deeper dimension to his beliefs and resulting actions.

To learn more about the fascinating ruminations that de Villepin takes on — everything from dream dinner guests and life-changing vacations to his preferred meal of choice — read on below.

I have several actually. One of them is “transform the moment.” It’s actually a philosophy — it’s the idea that you may never control what is going to happen, but you will always be able to control how you are going to take it. For me, it’s the capacity when something hits you, when life hits you, to be able to react to it not the way you are supposed to. Another is “from the dust of storms are born angels” — this idea that it is in the storms that some beautiful, magical things happen.

2. What is your drink of choice?

It really depends on the mood, but I’m more of a wine person.

My dog. I have a mixed breed, [a cross] between a Shiba and Labrador — it’s just the best of both worlds.

4. If you had to describe Hong Kong in one word, what would it be?

5. Which moment in your life would you most like to relive?

Every morning I wake up, I think of three moments I’m grateful for, and I always pick different moments. For example, a moment would be from a family holiday back in the Caribbean in Martinique: we were in a boat just after lunch. I realise that the moments I would want to relive are always related, it’s the simple things that I appreciate the most.

Pasta. That’s an easy one.

These days, I call it the ‘Family Sunday.’ It’s open table for whoever wants to come, it’s always chicken for lunch. In the morning I will go for a run, and then the beach. I’ll take a book, read, take the best shower, then a little nap after lunch. Then at night, I always have this playlist, I basically listen to Frank Sinatra. The dinner is pasta every Sunday. I have my routines.

I don’t have much regret to be honest. I don’t live with much regrets — sometimes I would love to go back in time, but no regrets.

10. What’s a relationship deal breaker for you?

11. What is your top destination to visit?

The Amalfi Coast. It’s a life saver. You take a boat out on the Amalfi Coast for a week, and let me tell you, your life won’t be the same afterwards. I’m all about discovery and journey and freedom, but at the same time I’m very traditional. I love to go back to the same restaurant every year.

That’s an interesting one — the rush, the storm, it’s like a huge tsunami every day. When you surf it, it’s amazing, but when you’re underneath … wow.

13. What’s the best or worst career advice you’ve ever received?

[Think of it as] the way you see a good racehorse from a bad racehorse: A good horse is not going to speed up when everyone speeds up. A good horse will speed up when everyone starts to slow down, when he feels that everyone is at the end of their energy level and at this moment when everyone is in the same pattern, he will accelerate then. For me, it’s like COVID this year. This is the moment where you do everything, you give it all, because this is when you make the difference.

14. What is one movie everyone should see?

One that really is important to me is ‘Gattaca‘. I love this movie, it’s beautiful and it will stick in your mind.

15. How many pairs of shoes do you currently own? Which do you wear the most often?

I have a lot, but not necessarily very different. Like Common Projects, I would buy five pairs of the same style.

No role model but several people [whom I admire] influenced me a lot — like my dad, for his tenacity and leadership, and Richard Branson, in my entrepreneurship journey, for his philosophy of this idea of ‘lifestyle.’ This idea that what matters is to have fun and to keep the fun in the business. We should be more laid back, but at the same time have the ability to focus on what’s important. I love that he is free, but at the same time he is ambitious about what he does — not just in business but in his capacity to make a difference in people’s lives.

17. What is your greatest fear?

Very naturally, it’s [that I would] stop being myself. Losing myself.

19. If you could invite anyone in the world to your dream dinner party, who would they be?

I’d love to have Van Gogh — definitely an artist there. I’d definitely have Napoleon, and then Natalie Portman. And Jesus. It would be a heavy conversation.

I don’t need to go anywhere, I’m a dreamer, I can go inside [my mind] very easily. That was my problem at school.

I have many good memories from the walks with my grandfather to summers in Saint Jean de Luz. I also remember a lot of things related to my father’s career, somehow being in these places where it was not normal, but I always knew it was special. Amongst the ones that I favour, it’s those little moments. Like when my father would bring me into his office and show me a book of a part of his collection and make it like a secret with me, sharing very intimate moments that only you can share with your dad.

22. Who is the best teacher you’ve ever had, what is one important lesson that they taught you?

23. If you could do it all over again, what is one thing you would you do differently?

Not one thing, I’m really happy with who I am now. Maybe I would buy a few Zao Wou-Ki paintings.

24. If you could live anywhere else in the world, where would it be?

I always say I don’t subtract — when people ask where are you going to go after, I will add another place. Don’t count on me to say I will move away from Hong Kong; I will keep Hong Kong and then add another place. For me, if I think about having another home: I have Paris, I have Hong Kong, I’d love to have a New York. I feel home in London, in Portugal, in Rome.

Summer. I’m very French, I would never miss summer for the world. Sometimes people [can’t identify with that] and say “I’m going to work,” but you know what? I work to do the summers.

Telling the truth and knowing it’s going to hurt people. That is a scary thing.

Espresso at the end of lunch or dinner. This always, for me, feels like closing the door and saying goodbye.

(All images courtesy of Arthur de Villepin and Villepin gallery)