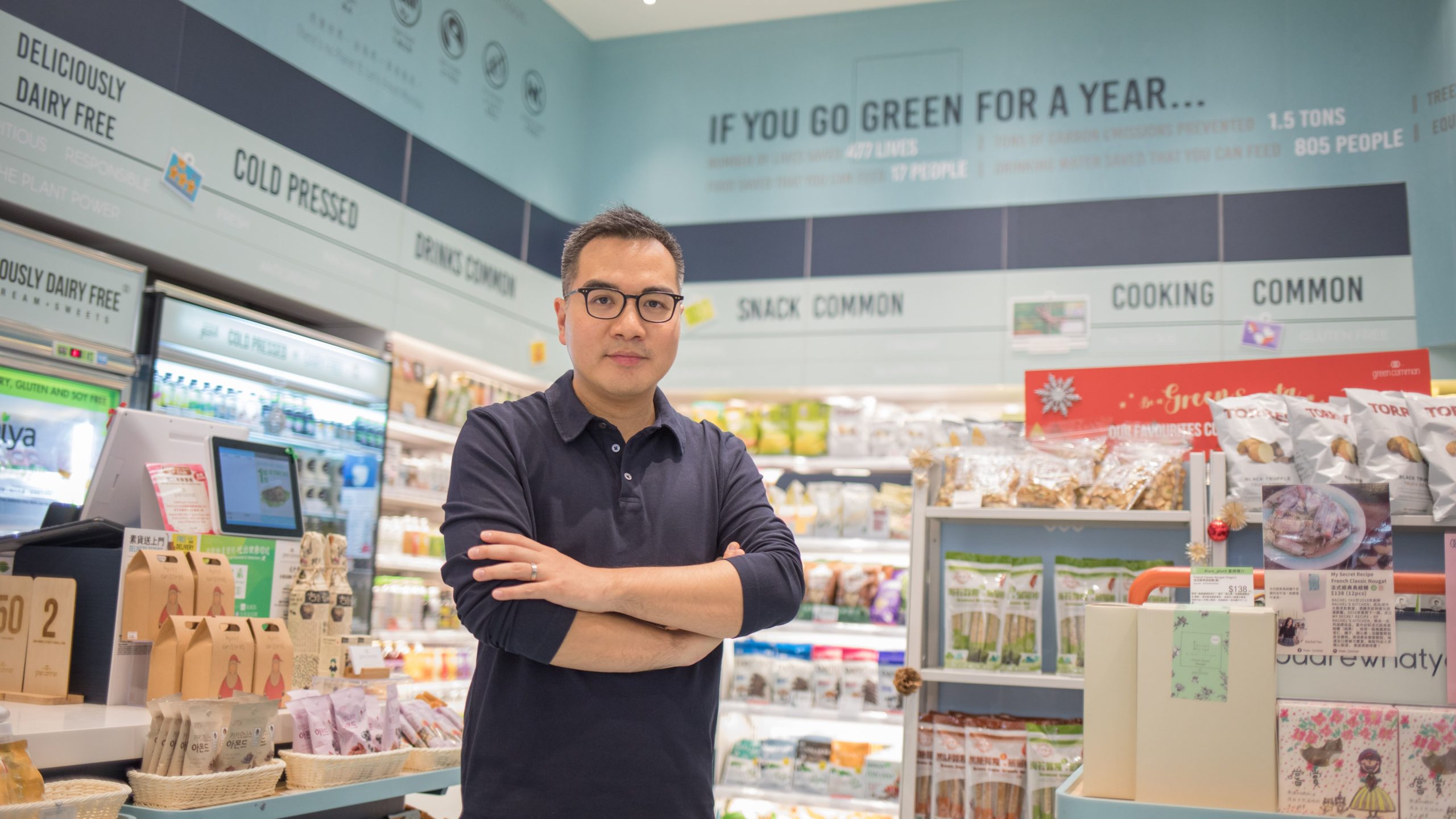 It’s finally here; the end of a nightmarish 2020. Looking anxiously towards the new year ahead, it’s easy to jump on the habitual bandwagon of ‘new year, better me’ resolutions. But with everything that’s happened this year, perhaps it’s high time to reconsider kicking those old unhelpful habits and welcoming the new — for good. Perhaps a new workout is on the cards. Maybe you’re deciding to cut back on single-use plastic. Or maybe, it’s the year to start considering going green. David Yeung most certainly agrees. As the founder and CEO of the widely popular ‘Green Monday’ social venture, David has been working furiously since 2012 to make living a sustainable lifestyle a whole lot easier by coaxing small, everyday changes into your routine.

As surrounding media on the growing current climate crisis becomes more prevalent — bolstered by ever-harrowing environmental documentaries — the general takeaway is this: Reducing meat and dairy consumption will be the most impactful step to reduce carbon footprint for the planet. But in a city brimming with the world’s best cuisines, it’s no doubt a challenging ask. 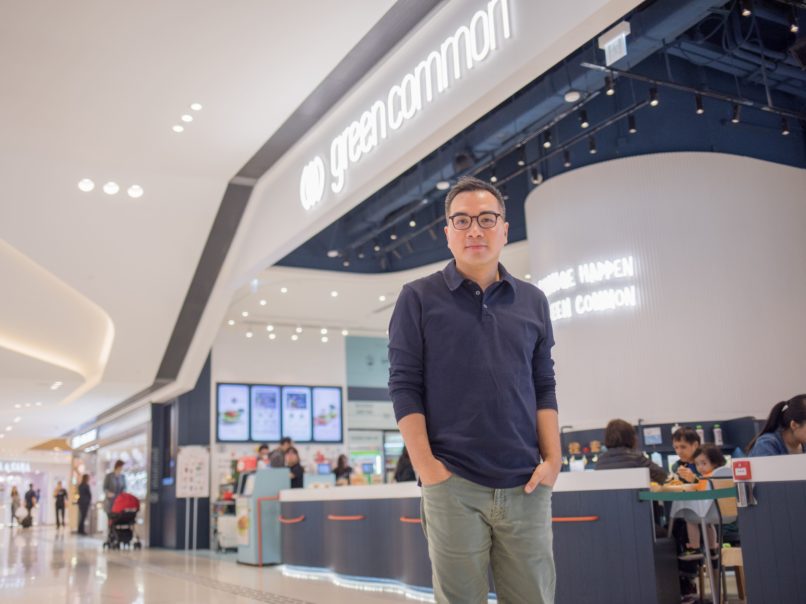 This is where this environmentalist makes his mark. What followed the popular ‘Green Monday’ concept — that suggests going meat-free for one day in a week– is his revolutionary step into food technology, launching OmniFoods. This led to the widely successful OmniPork, a two-year effort to create an imitation version of minced meat (luncheon ‘meat’ and ‘pork’ strip versions have also recently launched) made of pea protein, non-GMO soy, shiitake mushroom and rice.

It was an instant hit; both locally and globally with firm nods of approval from both seasoned and non-vegetarians. The plant-based alternative rolled out onto supermarket shelves around the world and even aboard airplane menus, with Hong Kong’s Cathay Pacific being the first, and finally embraced by Michelin-starred tables, served on the menu of esteemed Cantonese eatery, Ming’s Court.

Not stopping there, the group’s push to encourage greener substitutes was propelled by the opening of the world’s first plant-based concept store, Green Common. Known as a city-wide favourite for healthy groceries and snacks, this one-stop shop was loved and raved about, and has since opened in 12 different locations around the city.

Today, Kind Kitchen, a full and complete dining extension of Green Common is the latest project. On the menu are a helping of homey, familiar, feel-good dishes; nourishing soups just like ones out of por por’s kitchen to the cold-weather-suited hot-and-sour noodles, and David’s own favourite, OmniPork dumplings. Desserts are also aplenty. The best thing? They’re guilt-free.

With accolades like ‘Social Entrepreneur of the Year’, ‘Ten Outstanding Young Persons Hong Kong’ under his belt, and even a recognition from Fortune’s 2020 ‘Change the World’ list, we couldn’t miss out on catching up this eco-warrior between business trips and chewing the fat, so to speak.

All [kinds of] authentic Hong Kong foods!  From cha chaan teng to dai pai dong [dishes] and dim sum to congee and noodles.

Elon Musk and Tesla. I am a big believer that green and innovation must go hand in hand.  We can’t just tell people what not to do even though it may be true. To fundamentally solve the problem we must present a solution that possesses all the attributes that appeal to all users and buyers even if they are not environmentally-conscious.  Musk and Tesla are the textbook cases of that.

I have an endless craving for dumplings and dim sum.  So I am always touched when I get to eat my comfort food, especially with OmniPork.

8. What is your greatest fear?

As Franklin D. Roosevelt said: “Only thing we have to fear is fear itself.”  Like all people, I have experienced many fearful moments in my life, when I felt petrified and shaken. Although that has strengthened me as a person, I must admit I hope to never relive those fearful moments again.

9. When did you last ride the Star Ferry?

Within the last year. I love riding the Star Ferry. That 10 minutes of fresh air and breeze is a magical getaway from the hustle bustle of the hectic city life.

10. What is your biggest guilty pleasure?

An Inconvenient Truth. Climate change is the biggest threat and crisis that threatens everyone on the planet, yet most people are still not awakening to this ‘inconvenient truth.’

The father-and-son talks I had with my dad, when he shared countless fun stories and invaluable life wisdom.

14. If you could live anywhere else in the world, where would it be?

New York. I spent over a decade of my life studying and working in NYC.  Something about the vibe of NY that makes it one-of-a-kind.

Just like most people, many of my precious and unforgettable memories come from traveling, being exposed to different countries and cultures.

17. Who is the best teacher you’ve ever had, what is one important lesson that they taught you?

I am a student of Buddhist wisdom and philosophy.  The biggest lesson is the karmic relationship we have with the universe.

19. What would you do if you won the lottery?

Dedicate it to projects or causes that can create the maximum positive impact to our world.

20. What was the best gift you ever received?

The opportunity for good education.

Seeing actual change happening! We are catalysing significant shifts in local food culture and consumer behaviour. Plant-based options used to be non-existent in restaurants and supermarkets. Now they are blossoming everywhere.

22. What’s the best or worst career advice you’ve ever received?

Failing a certain task doesn’t mean failure as a person.  No success can be achieved without setbacks or failures. Turn those learnings into wisdom and grow from them.

23. What energises you about your work?

What cause can possibly be more meaningful to dedicate my life to than something that can be impactful for the planet, for humanity and for countless living beings?  That deep sense of mission as well as my entrepreneurial DNA are the factors behind my motivation and drive to “make change happen, make green common.”

24.When was the last time you felt starstruck?

The first, meeting Al Gore and sharing the stage with him on a World Economic Forum Sustainability Forum. The second, meeting Sir Paul McCartney and spending time one-on-one with him where he acknowledged and praised the work we are doing.

25. If you could snap your fingers and fix one thing about the world, what would it be?

If I have that magical power, I sure hope we can fix climate change.

Being an entrepreneur and creating a startup with no precedent is nerve-wracking.

Maybe a dragon, since I was born in that zodiac year.

Green Monday 27 Questions David Yeung Green Common
Lorria Sahmet
Style Editor
Two years covering luxury retail later, Lorria is thrilled to continue writing about what she loves best: fashion and food. When not roaming around garden centres hauling back new plants for her indoor jungle, she is most likely hunting down the best fries in the city. She's happiest by the ocean with a fishbowl glass of ice-cold Aperol spritz.
Style Lifestyle Jewellery Wellness Food