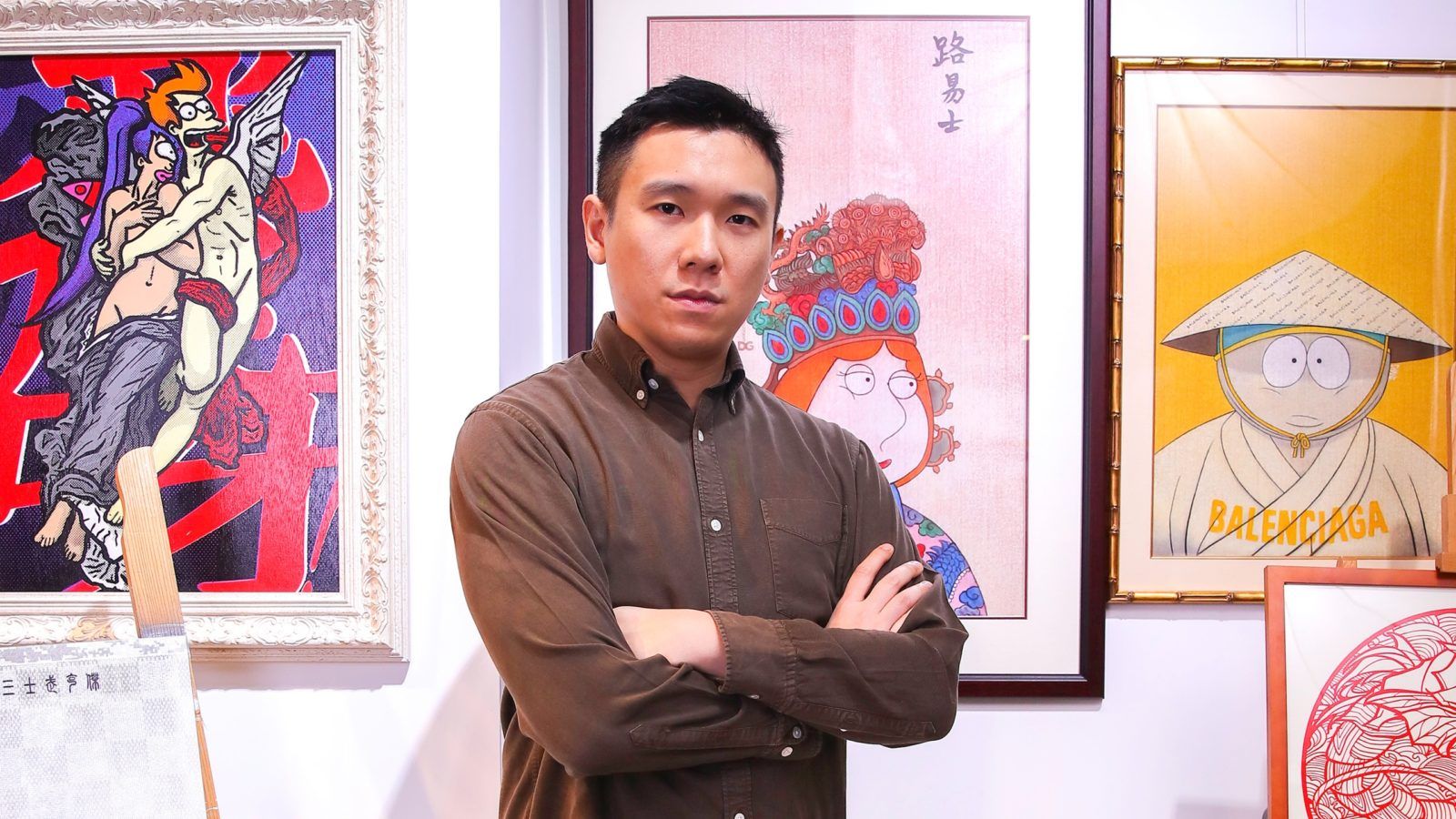 Living
27 Questions: Ernest Chang, artist and founder of The Stallery
Share this article
Next article

Achilles’ heels of the most ironic sort — think Beethoven, who couldn’t hear; chef-extraordinaire Grant Achatz, who (temporarily!) couldn’t taste — tell tales of cruel little twists of fate that, somehow, feel poetic. Prophetic, even. It tells a life of passion, lived in spite of obstacles; in spite of real, tangible reasons to walk away. Ernest Chang — a working visual artist with deuteranopia; or, red-green colour-blindness — is dealt one such hand of cards.

Just like his nationality (i.e., Chinese-American); birthplace (i.e., Tampa, Florida); brief stints in Ringling College of Art and Design and Savannah College of Art and Design; and demographic cohort (i.e., Millennial), Chang’s deuteranopia offers yet another lens from which he sees the world. Literally. Blanketed layers of dots that may appear brown and red to the rest of us will bleed into a pool of orange for Chang. This, in turn, informs the way Chang approaches his work. His techniques; his colours; his very way of thinking, processing and making. Even his now-renowned Pop Art-style aesthetic — with its thick, graphic lines — is a conscious choice; one made as a workaround to this singular way-of-seeing.

Beyond his profession as a working artist, Chang is also the founder of The Stallery: a portmanteau of ‘studio’ and ‘gallery’. You know the one; that sunshine-yellow brick-front gallery atelier seated at the tail-end of Stone Nullah Lane, doorsteps away from Wanchai’s historic Blue House. Chang’s camera lens — his choice of medium from a past life as a photographer — has also touched upon this historic landmark, preserving and commemorating the Blue House as it stood — decrepit tatters and all — prior to its reconstruction in 2016. This series of photographs, titled the ‘Blue House Clutter Project’ in collaboration with St James Settlement, became award-winning in 2017.

It is precisely this sense of community; this sense of Chang as not apart from but a part of said community, that connects the artist, The Stallery and his work within this little nook of Wanchai.

‘Bling Dynasty’, Chang’s latest exhibition, weaves together the very facets that make up his personhood. On show are a host of Western, predominantly American, cartoon characters, rendered anew in pastiches that imitate iconic Chinese portraiture. Rick and Morty’s Rick seated in the style of ‘KangXi Emperor’ (1699) in ‘Age of Abundance’ (2020). South Park’s Eric Cartman, modelled after ‘Khublai Khan’ (1294) in ‘Don’t Say Anything Mean’ (2020). This presence of traditional Chinese craftsmanship and artisanship can be appreciated, too, through the exhibitions’ plethora of mediums, from delicate paper-cut designs to sheaths of beautifully embroidered pieces — crafted in collaboration with master embroiderers.

Vestiges of a bygone childhood, now tainted with overtures of consumerism and branded garb and hypebeast modalities — see: Kermit looking particularly pleased in VETEMENTS and Fear of God in ‘A Favor For A Favor’ (2020) — turn an outwardly joyful, tongue-in-cheek series into one that deserves moments of reflection. ‘Bling Dynasty’, then, reads like a cautionary tale. The cartoon-watching age cohort of today is most probably swiping through TikTok instead; watching propelled-into-stardom teens cohabit in mega-mansions clad in the latest hyped-up Gucci x whatever collection. And that’s the benchmark of aspiration.

Stepping into The Stallery’s now-gold foiled interiors — blinged up for ‘Bling Dynasty’, of course; we shot the breeze with the artist through our signature rapid-fire interview, meandering through everything from his past drug addiction to his childhood growing up with Disney World a stone’s throw away.

My life motto is: ‘Just for today.’ I just live for today and think about tomorrow, tomorrow. Hopefully. This is an actual motto from Alcoholics Anonymous; it’s something you have to say everyday.

3. What’s your drink of choice?

Does it have to be alcoholic? A gin and soda.

I have a million plants. I have a really wide window and I fill it with plants.

6. Which phone app do you think more people should know about?

Hmm. Grindr? No, I’m kidding. Yummly! It’s a recipe app for when I stay at home and cook. I just type in all my ingredients and they give you the recipe.

Galápagos Islands! It’s the place where Darwin discovered evolution, you know? They also have these iguanas that swim. They’ve evolved from iguanas that climb on trees to iguanas that swim and lick salt off rocks for survival. Isn’t that insane?

Not being loved. That my art sucks. I don’t know!

Bridesmaids (2011)! Best movie. They’re going to have a new one, too! It’s not Bridesmaids 2; it’s a new film from the people who wrote it. It’s a funny movie with Jamie Dornan in it and it’s coming out during Chinese New Year. It’s called Barb and something goes to Las Vegas — or something. [Editor’s note: It’s called ‘Barb and Star Go to Vista Del Mar’; trailer linked below]

I guess I wouldn’t mind the opening of my gallery. It was very exciting. We invited all our friends and all our family. The gallery was empty back then so we could fit a whole lot of people.

I would like to say New York. My grandpa lived in New York for, forever, so we used to go there.

‘The Man’ by Taylor Swift. Haha. I do know all the words to it.

Disney World. I was born in Florida and when I was a kid, we had these annual passes and we’d go, literally, every month. There was this water park called Blizzard Beach Water Park and they had this really, really tall slide. You’d get the biggest wedgie of your life when you slid down, but it was so fun.

It was my French teacher and she taught me this idiom: “Empty vessels make the most noise.” I’ve always remembered that.

I have no party tricks. I have zero game. But I have tattoos!

20. Do you have any favourite tattoos or special birthmarks? What is it?

My favourite tattoo is my Albrecht Dürer. He was a 1600’s German Renaissance artist and he made this first piece of art that ultimately contained the feeling of melancholia. I had that tattooed when I was 16 when I was going through a lot of depression and it helped me put a focus on that — and move on.

Never alone. Because I really enjoy the company of other people and they inspire me. So, without them, I wouldn’t be able to make anything.

I would do nothing. If I won the lottery, I would gift half to charity and gift the other half to my mum. I love her.

Wow. I don’t think that. I never feel like I’ve made it. I think I still always have room to improve on my art. That’s what makes good art, I think.

I guess I would’ve not been so experimental with addictive drugs. I would try to stay focused on things I wanted to do instead of constantly getting side-tracked by drug addiction.

25. Start your life again at age 15 with all the knowledge you have now, or fast forward 10 years?

Definitely start my life again at 15. For sure.

Starting my own business. It’s because I never knew exactly how hard it is to start a business and have it succeed and continue succeeding, year after year.

One, solve climate change. Two, solve world hunger. Three, stop people from killing each other all the time.

‘Bling Dynasty’ runs from 20 February to 4 April at The Stallery.

(All images courtesy of Ernest Chang and The Stallery)

27 Questions The Stallery Art Gallery Hong Kong Bling Dynasty
Joey Wong
Editor
Retired Tumblr girl Joey has written her way through fashion trends, youth culture and luxury retail in New York and Hong Kong. Beyond internet adventures tracking down the perfect vintage find, you can probably catch her tufting rugs, swigging back Bloody Marys — her third, probably — and making fastidious spreadsheets about her Animal Crossing island.
Style Fashion Beauty Culture Hong Kong
Sign up for our newsletters to have the latest stories delivered straight to your inbox every week.