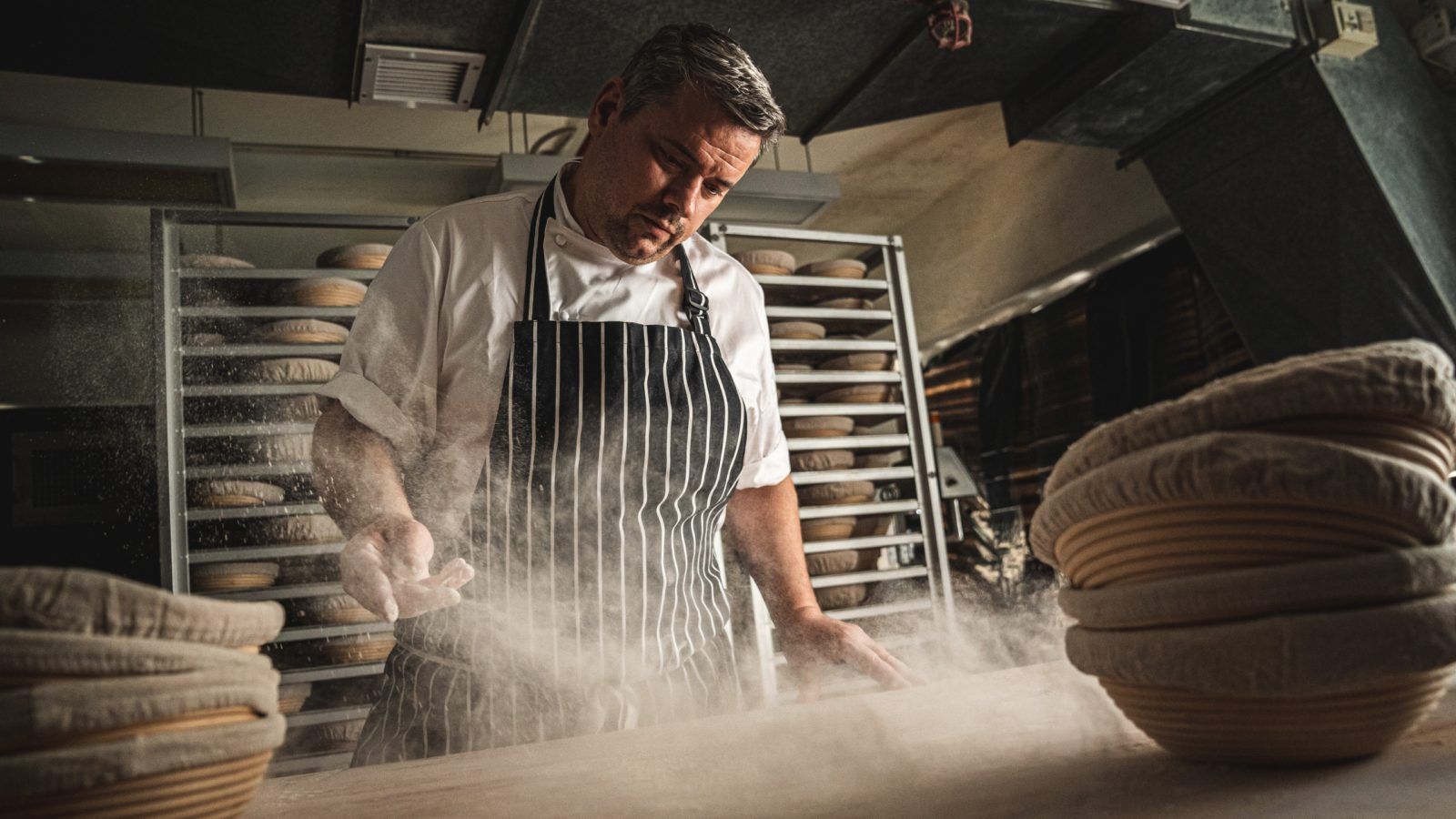 There aren’t many things I’d willingly stand in a line for. A sublime cup of coffee from a new, temporary pop-up? Maybe. A glimpse of Harry Styles’ tousled-just-right curls post stadium concert? Possibly. But the promise of Bakehouse’s little sourdough egg tarts? Have done, and will do again. Catch me on the corner of Staunton with fingers crossed so tight the patron in front of me doesn’t snag up the last of the flaky egg-yolky-yellow delights. It’s happened before — I went for an almond danish instead; also delicious — most probably will happen again.

Those long, unending Bakehouse lines and those electric-blue paper bags — strung with bright-orange shopping handles — hold Pavlovian power over so many in Hong Kong today, foretelling tales of yummy, scrummy treats to come. This frenzied, Pied Piper effect has not waned since the bakery-café’s debut in Wanchai only three short years ago; a well-deserved testament to founder Grégoire Michaud’s genius.

Michaud’s story begins in his hometown of Valais, Switzerland. The germination of a passion — let alone a life-long career — is something so special; for Michaud, this came early on as a precocious, candy-loving child. When access to candy became scarce, Michaud learned how to make crêpes from scratch. This moment of making, then, devouring, was his moment of epiphany.

From being taught by master bakers at Switzerland’s Richemont Fachschule to becoming one himself in the kitchens of five-star hotels — he was once the executive pastry chef of the Four Seasons Hong Kong — and three-Michelin-starred restaurants, Michaud’s passion for his work is demonstrable; just take a quick scroll through his Instagram feed (@GregoireMichaud) for a hunger-inducing stream of flaky pastries and airy sourdough profiles, sliced deliciously in half.

It’s not only bakeries under Michaud’s belt, too. His cookbooks — five of them, in total! — are award-winning, with the first, ‘Artisan Bread’, published in 2009.

We broke bread with chef Michaud in our signature, rapid-fire 27-questions interview, as we delved through the flour to meet the man beyond the bread; beyond the sourdough egg tarts; beyond Bakehouse, even. Meet Grégoire Michaud: the family man, the consummate professional and the ultimate lover of his chosen home, Hong Kong.

Whatever you do, don’t be lazy.

Baker at La Boulangerie Du Pont in Martigny, Switzerland. I was 15-years-old.

Odd question for a baker! After so many years, being awake at night is normal. But on a normal basis, I am a morning person.

I have absolutely no regrets. When I don’t succeed, I learn.

8. What do you hate most about living in Hong Kong?

How this city is lagging so much behind in terms of sustainable and technological development. Green transportation, electrical buses, taxis, digital services, etc. So many laws and policies are stuck in time and don’t evolve. It’s impairing the dynamic of the city.

Running out of time. Time is the only real luxury we cannot control.

Letting that Swiss hazelnut milk chocolate melt in my mouth as I binge-watch Netflix.

‘L’Intouchable’ by Olivier Nakache & Éric Toledano. It reminds all of us that we often take the simple things for granted and that sometimes, we might need a reminder to rediscover the humanity in ourselves.

The day I introduced my new-born son to my parents. The very moment I saw the sparks in their eyes — that moment was priceless.

My parents, my brother, my wife and my son — family first.

I hike to the top of Tiger’s Head on Lantau island very early in the morning.

17. If you had to describe Hong Kong in one word, what would it be?

Sneaking into the tall grass in my neighbour’s orchard with my friends, reaching up into the apricot trees and eating the fruits. Then, getting caught but denying it despite having our faces covered in apricot juice.

20. Who is the best teacher you’ve ever had, what is one important lesson that they taught you?

I had a few, amongst them my apprenticeship master Mr Andre Golay. He taught me resilience through his hardships. Later, my Lieutenant in the military had the same effect, but on a different level.

21. Have you ever experienced love at first sight? Tell us about it.

When I first laid my eyes on my wife Vianna. It’s only after this that I understood what ‘love at first sight’ meant. We were both drinking in a bar in Tsim Sha Tsui and when your eyes can see the soul of a person beyond everything else, it’s love at first sight.

I don’t have tattoos, but I have plenty of burn marks on my hands from work!

23. What was the best gift you ever received?

My son is the best gift I have ever received. There was also the time my wife arranged all my close friends to be there for my birthday and the surprise made me very emotional. As I am not a materialistic person, I don’t really value physical possessions.

24. What energises you about your work?

I feed on people’s satisfaction; their happiness keeps me going. It motivates me every time I am able to bring joy into someone’s day with my work, and this applies not only to customers but also to my staff. If I can make life better for them, it gives me energy.

25. When was the last time you felt starstruck?

When I had dinner and drinks with Nancy Silverton from LaBrea Bakery. I’d been a lifelong fan and I admire her for bringing sourdough bread to the masses; it’s exemplary.

26. If you could snap your fingers and fix one thing about the world, what would it be?

Sourdough 27 Questions sourdough bread Bakehouse Grégoire Michaud
You might also like ...
Living
27 Questions: Vincent Leroux, culinary director at Eatology
Food & Drink
The best bakeries in Hong Kong for European-style breads and pastries
Joey Wong
Editor
Retired Tumblr girl Joey has written her way through fashion trends, youth culture and luxury retail in New York and Hong Kong. Beyond internet adventures tracking down the perfect vintage find, you can probably catch her tufting rugs, swigging back Bloody Marys — her third, probably — and making fastidious spreadsheets about her Animal Crossing island.
Style Fashion Beauty Culture Hong Kong
Sign up for our newsletters to have the latest stories delivered straight to your inbox every week.