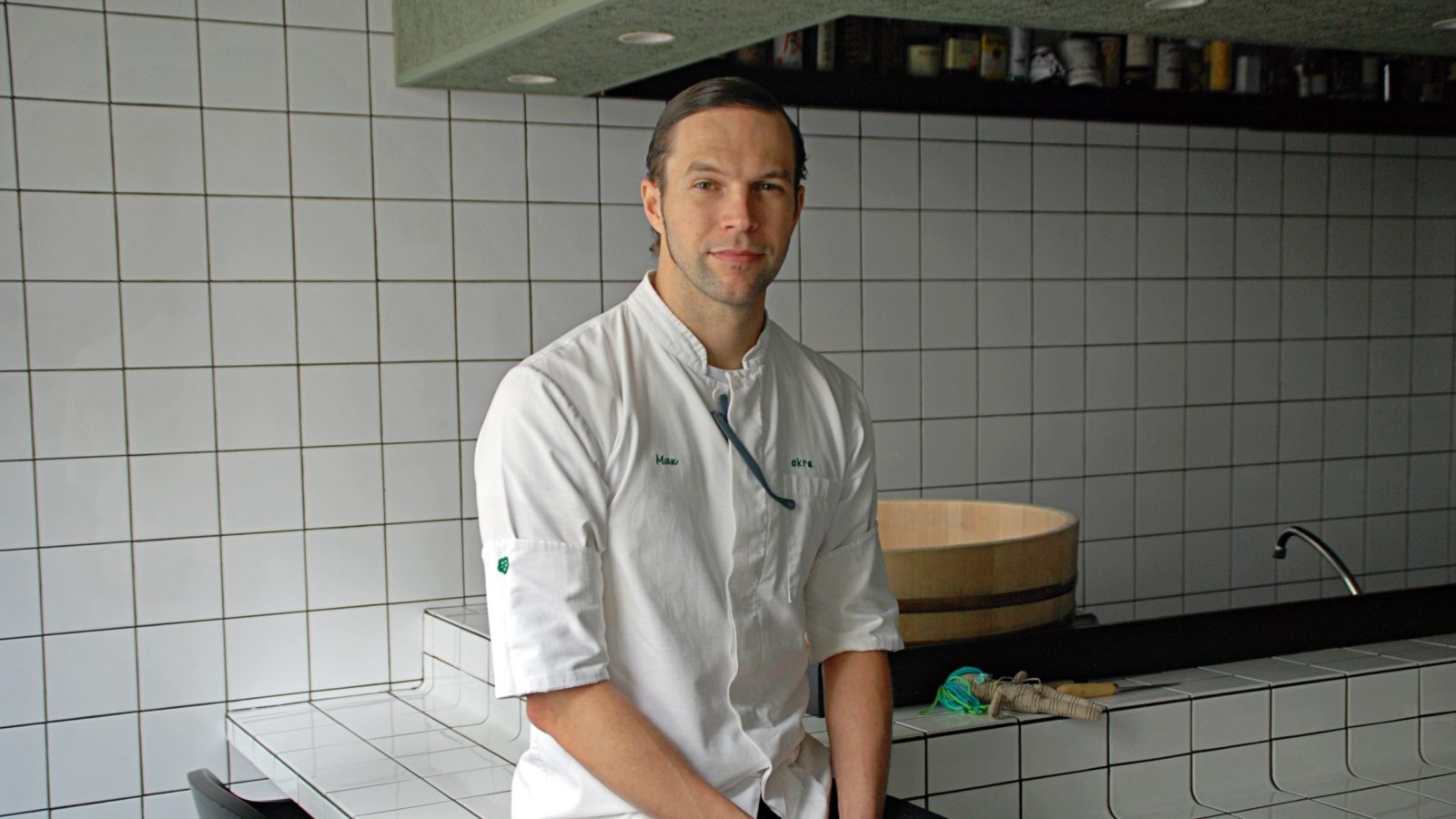 In this week’s 27 Questions, we caught up with chef and co-owner of Sai Ying Pun izakaya Okra, Max Levy, who has recently also taken up the mantle of culinary director at one of Singapore newest lounges, Beats Bites & Cocktails.

At the Sai Ying Pun hideaway on any given night, you’ll spot Levy running the pass, pouring sake, slicing fish, plating dishes — all while the protagonists of a salty Toshio Saeki mural watch on. The New Orleans native boasts a CV perhaps as offbeat and fascinating as his choice of artwork: Years before opening Okra’s kitchen and its upstairs omakase sushi bar in 2015, Levy found himself in Tokyo as a tuna handler, a worker at an eel farm, as well as a stint as a biodynamic salt maker, before returning stateside to Alaska where he also wrangled salmon. He rose up the ranks at some of New York’s most venerated sushi counters, before heading east again where he started a number of culinary concepts in Beijing.

Levy gradually made a name for himself with his house cured charcuterie and barbecue, harking back to his Southern roots and fascination with Asian techniques of meat preservation. He experimented with a Japanese menu with northern Chinese flavours at The Opposite House’s former restaurant Bei; contemporary Creole food and cocktails with house-made spirits and cold cuts at Apothecary Cocktails and Dining; then later, at pop-ups such as Traitor Zhou, a non-kosher delicatessen in Beijing’s 798 Art District which served unusual dishes like bacon-filled matzo ball soup.

He started the Okra brand in Beijing as Okra 1949, a sushi and cocktail bar in Sanlitun which operated until 2017. Calling Hong Kong home since 2015, Levy also had a hand in several meaty projects such as The Chicken Bar, known for its mouth watering fried chicken sandwiches; and Sausage Commitment, a passion project that focuses on house-cured meats as diverse as northern Thai sai oua sausages to Louisiana-style andouille.

In a year characterised by remote work, Levy has also set his eyes on a new project in Singapore — he’s now also the culinary director of Beats Bites & Cocktails, though he will be remaining in Hong Kong for the post. With this appointment, our neighbours in the Lion City are now able to snack on Okra Hong Kong favourites such as the popular eggplant nanbanzuke and tender smoked mala ribs.

In the midst of these happenings, we sit down and get to know the chef on a more personal level — discussing everything from his upbringing to wise words he’s received from his role models; his obsession with time; and the most curious guestlist for his dream dinner party.

My first job was working as a dishwasher at Downstairs at Eric’s, a pizza pub in Breckenridge, Colorado. I was 12 years old.

2. What is your drink of choice?

3. What is the best meal you’ve ever eaten in Hong Kong?

That’s a hard one, but I think the best meal that I’ve had this year would have to be at Ta Vie, the food and the hospitality of Hideaki and his wife Hiromi are truly unmatched in Hong Kong.

4. If you could only eat one thing for the rest of your life, what would it be?

5. What is your biggest guilty pleasure?

Coffee and breakfast, then a kettlebell workout and lately we’ve been heading to the beach in Sai Kung, which is usually followed by a casual dinner at Yè Shanghai or Pica Pica.

7. If you could invite any five people in the world to your dream dinner party, who would they be?

Donald Trump, Rodrigo Duterte, Greta Thunberg, DMX, and Haruki Murakami. I would give them a live sheep, a carrot and a Zippo and let them figure out the menu. I don’t get to go to dinner parties very much, so it’s all about the entertainment.

8. If you could banish someone from Hong Kong forever, who would it be?

Anyone that treats or judges someone differently, based on the color of their skin or where they were born.

9. Where do you go when you want to be alone?

I just walk around the streets. It’s so crowded that it can be the loneliest place on earth.

10. Which phone app do you think more people should know about?

WeChat – it makes using WhatsApp feel like using a Blackberry.

Not being more patient with my family when I was younger.

13. What is one thing you’ve never revealed to your parents?

If I revealed it here and they read it, then what?  After my mom died, I always told my father everything that was going on. I still do let him know that I might be hungover and not be able to call tomorrow. We don’t agree on everything, but I don’t have much to hide.

14. What is your favourite scent in the whole world?

Louisiana is ‘rice country’, so I grew up eating a lot of rice and making it in my household was reserved only for my father. I’ve been studying sushi rice since I was 17 (almost 25 years now), so it always makes me happy to do that well.

Dirty (a double espresso with cold milk for the ‘champion’ coffee places that refuse to make it). It reminds me of the café au laits that I grew up with back in New Orleans.

17. What is your greatest fear?

That I’m wasting my time.

[Sushi master] Naomichi Yasuda. “Your only true competition is yourself.”

My unique party trick used to be drinking one whole bottle of sake in one gulp. Now, it’s expressing myself with only my eyebrows.

20. Have you ever experienced love at first sight? Tell us about it.

Second sight. I married her. I met her for about 20 seconds five years ago in Beijing, but I remembered only that I met her and nothing more. We both ended up in Ibiza for a friend’s birthday party in 2018. As soon as I saw her, I knew that she would be moving to Hong Kong soon, or I would be moving to Barcelona.

21. What’s the scariest thing you’ve ever done, and why?

Getting on the last smoking flight from JFK to Beijing by myself, to move to China in the middle of SARS.

I don’t like to put too much thought into my tattoos and prefer to have them be representative of me at the time that I get them. A friend was visiting a few years ago and getting some work done by a “really really famous guy” and she asked me to come along and hang out.  When they were done, they said I should get one too, because he was very hard to book. “Sure.” “What do you want?” he says. I put my hands in my pocket to think about it and noticed my 759 member card and pulled it out.  It had a picture of Thomas the Train on it and I said “I want Thomas in a balloon”. The guy was so pissed, but he did it anyway. It never fails to make people smile when they see it, and that’s all that matters.

24. What was the best gift you ever received?

Time. I’m always humbled and happy when people choose to make time for or spend time with me.

I have no problem with either, but I would rather spend the rest of my life with my wife.

26. A genie gives you three wishes — what are they?

1. That there are no more questions; 2. More time; 3. That the movie ‘Idiocracy’ does not come true.

27. If you could do it all over again, what is one thing you would do differently?

Okra Okra Hong Kong 27 Questions Max Levy
Evelyn Lok
Managing Editor
When not trying out the latest beauty and wellness trends, Evelyn is likely enjoying a perfectly balanced negroni or exploring some of Hong Kong's best new places to eat and drink. At Lifestyle Asia she covers everything from the biggest events in town to interviews with Hong Kong specialists, with topics spanning art, food and drink, health, tech, and travel.
Beauty Wellness Events Art Drinks