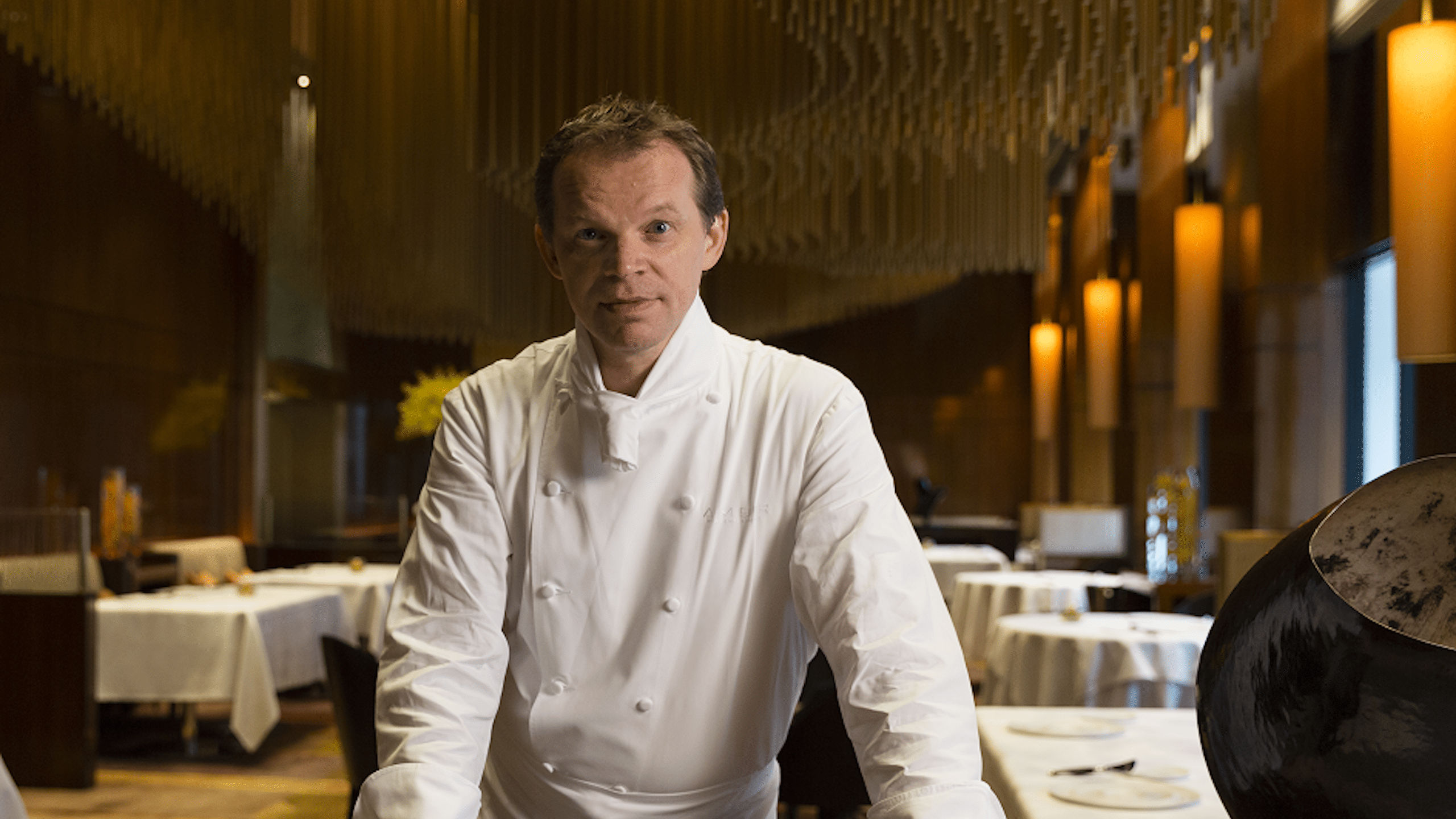 Hong Kong is a place brimming with talented and intriguing people. In 27 Questions, we get up close and personal with notable Hong Kong personalities, learning about their whims and aversions, pivotal life moments, and hopes and dreams — all revealed in roughly the same amount of time it takes to sit through a round of speed dating.

In a city where restaurants appear to open and close at the drop of a hat, and where even the most casual patron fancies themselves a dining critic, Amber has maintained critical-darling status for 13 hard-fought years. The two-Michelin-starred restaurant (located in the equally excellent Landmark Mandarin Oriental) has become synonymous with Hong Kong’s status as a fresh and innovative fine-dining destination, not just within Asia but from a global perspective as well. One of the key players in this gastronomic renaissance is chef Richard Ekkebus, Culinary Director at The Landmark Mandarin Oriental and the sole custodian of Amber since 2005.

A Dutch maverick who trained under French masters such as Guy Savoy and Pierre Gagnaire, Ekkebus fortunately brought his visually imaginative and ingredient-driven style of cooking to Hong Kong. It’s telling that in all the time Amber has been open, the chef has never vacated his post; this is a man whose soul and raison d’être is, evidently, tied up with his restaurant. Just days ahead of a temporary closure which will see Amber reborn (after four months of extensive renovations), we took the opportunity to chat to Ekkebus about slightly less lofty (but no less fun) topics. From his tipple of choice to love at first sight, step inside the mind of this culinary wunderkind. 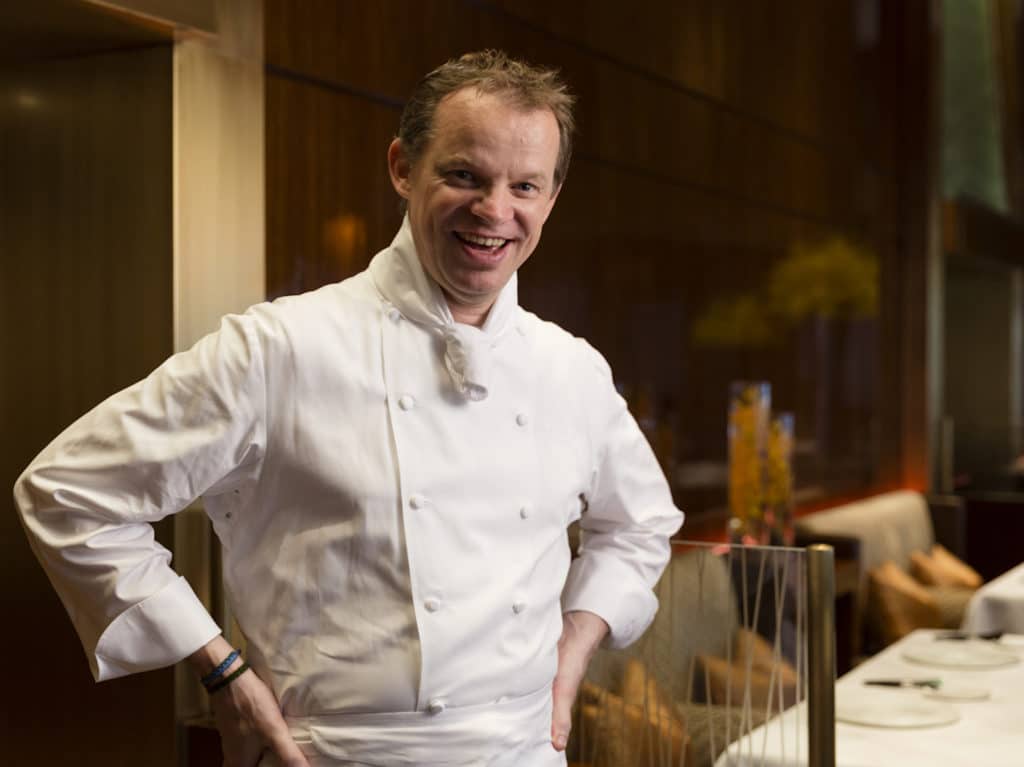 Luctor et emergo — it’s the Latin motto of my home province of Zeeland in the Netherlands. These words denote our constant battle agains the ocean, since Zeeland is technically below sea level. Basically it means, “I struggle, I survive, I persevere”, a sentiment that’s helped me throughout my career and personal life.

A late festival meal last year at home, surrounded by my wife, kids and close friends. The food was home-cooked and simple — a vehicle for great conversation and a lot of fun. My best meals are always in the best company.

A few weeks ago while I was in Mauritius, but I’m more of a motorcycle rider. I’d take a motorcycle any day over a car — that’s my transportation of choice in Hong Kong.

My balcony faces the Aberdeen Marina Club’s yacht harbour. Everywhere I go, I’ve had and will always need to have that connection with the ocean.

7. Which phone app couldn't you live without?

Google Maps! I’m a terrible navigator who gets lost easily, so it’s instrumental in helping me get around by bike and on foot.

Seafood. I was born and raised by the sea; it has shaped who I am.

To have not finished university.

People are not considerate of motorcyclists, it can be extremely dangerous.

Rarely. My wife Fiona is a fantastic cook and I love eating her food. At home, I mainly do the wine opening!

A few weeks ago. We make it a point when we have friends in town to take them on the Star Ferry at least once. It’s a fun ride that really enables you to admire the views of Victoria Harbour. I’m a total fan.

I wake up later than usual and start by having a single espresso and healthy breakfast in bed. I read a great book whilst playing a record on vinyl, then head into town somewhere for a casual lunch. I’ll sometimes catch a movie in the afternoon, before heading home for an early dinner cooked by my wife, usually accompanied by a killer bottle of wine that I’ll decant if necessary. Early to bed.

The first five years of having kids.

Mauritius: It’s a place we called home (and still do) for 8 years. My son was born there and my daughter grew up there.

19. What is one song you know all the lyrics to?

“Stairway to Heaven” by Led Zeppelin.

Well, I think the trademark of Hong Kong people is tolerance, so no one!

The smell of the sea.

I let others judge whether I’m a good cook. As previously stated, I rarely cook at home but am known, on occasion, to do a serious salt-cooked fish and beer-boiled mussels.

24. Who is the best teacher you've ever had?

Robert Kranenborg. He’s a 2-star chef in Holland who played a critical and elementary part in my training. An extremely strict but articulate teacher, he taught me the importance of passing on craftsmanship.

25. Have you ever experienced love at first sight?

Yes, when I met my wife. She’s a beautiful woman who owned the barbershop that I used to go to. One time when I went in for a haircut, she was on her way out. I walked in, she changed her mind and the rest, as they say, is history.

26. How many pairs of shoes do you currently own?

I reckon around 30 pairs? I love shoes: They’re a mutual passion that my son and I share, though I think record-wise he’s got me beat! At the moment my favourite style are the “Achilles” hi-tops by Common Projects.

I could never be alone for the rest of my life! I’m a social animal. More important, I’m a chef: The essence of our lives is to share and to give.

Interview Amber People The Landmark Mandarin Oriental Richard Ekkebus 27 Questions
Randy Lai
Editor
Having worked in the Australian digital media landscape for over 5 years, Randy has extensive experience in men's specialist categories such as classic clothing, watches and spirits. He is partial to mid-century chronographs and a nice chianti.
Style Watches Drinks Tailoring Travel
Sign up for our newsletters to have the latest stories delivered straight to your inbox every week.