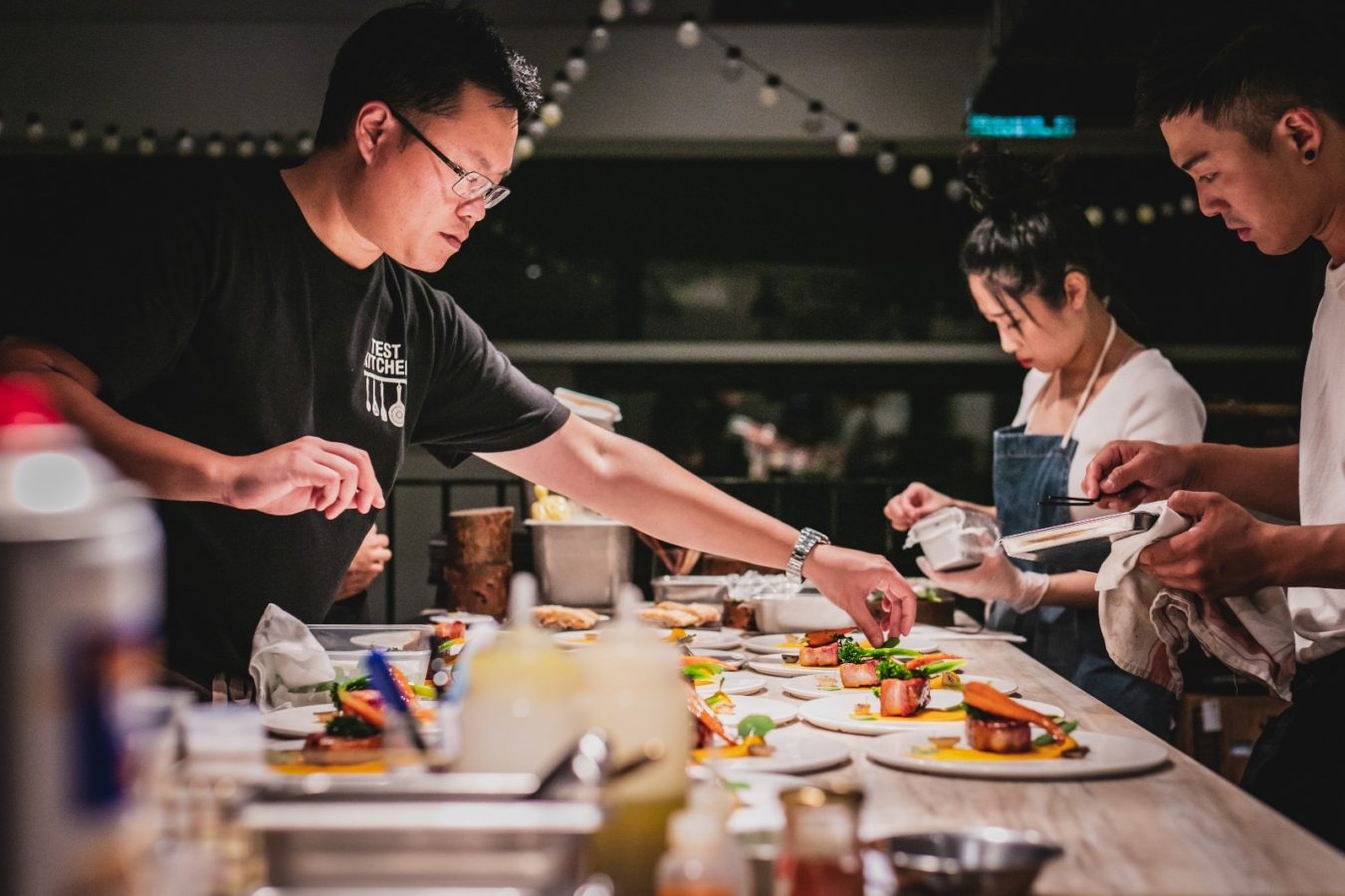 Hong Kong is a place brimming with talented and intriguing people. Each week in 27 Questions, we get up close and personal with the city’s notable personalities, learning about their whims, aversions, pivotal life moments, and hopes and dreams — all in roughly the same duration it takes to sit through a two-minute speed date. In this week’s iteration, we speak to Test Kitchen founder Vincent Mui.

Flying international chefs in at a regular basis to cook at quickly selling out pop-up dinners? Sounds like the most foreign concept in the world at this point, considering 2020’s nightmarish unfolding of non-stop challenges for the F&B industry. But if we can take a moment to reminisce back to the booming dining scene of not so long ago, we can tip a hat to Vincent Mui’s drive for pushing the envelope for culinary creativity in Hong Kong, when he launched Test Kitchen five years ago.

Before Mui launched the concept in 2015, he first got a taste of the pop-up life when he joined friend and ‘Top Chef’ semi-finalist Kwame Onwuachi on a three-month cooking tour. Mui was in culinary school in New York City at the time. “I had such a good time as a young cook and learned a lot travelling and cooking around the country,” he recalls.

When he returned to Hong Kong, he wanted to create a platform that brought in passionate chefs from Hong Kong and around the world to cook their food and share their stories. “I realised that not all the chefs have the room to cook their food and push their own boundaries, so to give the right support and platform, I opened Test Kitchen — we haven’t looked back since.”

In five years, Test Kitchen has run more than 50 pop-up events, plucking chefs from all over the world via Instagram and Mui’s personal connections to headline at the Sai Ying Pun loft space. To date, they have featured a vast variety of talent, from James Beard award winners to Michelin-starred chefs, chefs new and old alike.

As a result of the pandemic, Test Kitchen — like other restaurants in Hong Kong — had to temporarily close its dinner service in the past months. An event slated for the end of July, former Bo Innovation chef Peter Lee’s ‘Scenes from Childhood’ pop-up, had to be postponed to early October. At the same time, like other restaurants, the space had to resort to offering takeaway and ready-to-cook packages, as well as cooking at guests’ homes for private catering events.

“We had to switch gears and think of ways to bring that experience to people, such as through takeaways and home catering,” Mui says. “I honestly feel we should be prepared for another wave and plan for the worst as well. But my goal is still to fly chefs in again next year and continue with our globally inspired dinner pop-ups!”

With dinner service newly opened up once again in Hong Kong, and ahead of hosting a weekend redux of a Japanese Wagyu series by chef Yu Tomiya, we caught up with the founder on what he likes to do outside the kitchen — on the people who have influenced him, his favourite childhood memories, his passion for driving, and more.

A summer Intern at an IT firm called Brocade that did ‘data storage area network,’ something I had zero interest in! But my favorite job was as a busboy in Dan Ryan’s, just before I went to culinary school.

When we had chefs from Berlin and Iceland visiting Test Kitchen for pop-ups, we all went to Luk Fook in Sai Kung for a seafood feast. The food was amazing: it doesn’t get fresher — or more typical of Cantonese cuisine.

Gin Tonic with a bit of yuzu by Ichiro-san at Executive B.A.R. in Causeway Bay.

Every day. I absolutely love driving. [When I want to be alone], I just go for a drive around the island.

We happen to have just moved apartments and did a full renovation, so all the touches were designed by my wife with a friend who’s in design. It’s all the little details, but if I had to pick, it’s this big black wooden door in the middle of the apartment. It’s also in a neighborhood we love and we’ve been living on this same block since we got married.

Night Owl. On weekends though I’m up at daybreak to go for a spin.

It’s not unknown, but Spotify! All the music and playlists I love stored and available anytime.  Especially when we do prep at Test Kitchen, music is really important, as well as during our dinners. Here’s a mix of what I normally like to listen to:

My grandpas. I wish I could have one last meal with them both and pick their brains — as well as tell them how much I admire them.

9. If you could invite any five people in the world to your dream dinner party, who would they be?

10. What is your biggest regret in life?

Not actually having cooked at my own pop-up — but that might change!

11. If you could only eat one thing for the rest of your life, what would it be?

12. What is the top destination on your bucket list?

Tuthill Ice Driving in Sweden with their rally-spec vintage Porsches.

Let’s just say the chefs who cook at Test Kitchen are way better than I am!

Get up early in the morning for a drive and coffee, then head to Test Kitchen and set up for the pastry pop-up — then either working for dinner service or joining the family for dinner.

15. What is your biggest guilty pleasure?

Ice cream at 1am on the couch, while everyone in the house is asleep.

Eating Chinese takeout in a dorm room with my high school roommates at Salisbury School in the US, watching Stephen Chow movies and playing Big Two.

NYC — I miss the energy there.

The grit, being hardworking, empathy — and the never-ending quest for good food!

21. If you could banish someone from Hong Kong forever, who would it be?

I’m split between BBQ pit smoke or when I cuddle my daughter.

23. Who is the best teacher you’ve ever had, what is one important lesson that they taught you?

Mr. Curtis, Geography teacher and ex-SEAL — he taught me perseverance.

24. What is your unique party trick?

I can whip something up from the fridge, no matter how many drinks I’ve had.

My two-year-old daughter. It’s funny because she looks just like me — she even has my belly.

I love people and conversing, I guess if you’re in hospitality and you don’t love having people around then you’re in the wrong career.

Test Kitchen 27 Questions Vincent Mui
Evelyn Lok
Managing Editor
When not trying out the latest beauty and wellness trends, Evelyn is likely enjoying a perfectly balanced negroni or exploring some of Hong Kong's best new places to eat and drink. At Lifestyle Asia she covers everything from the biggest events in town to interviews with Hong Kong specialists, with topics spanning art, food and drink, health, tech, and travel.
Beauty Wellness Events Art Drinks