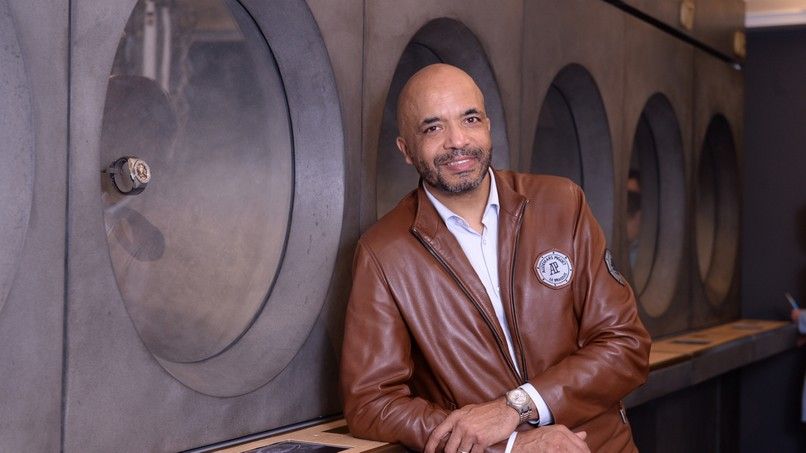 Arriving at the Audemars Piguet VIP booth at Art Basel Hong Kong last month, we were immediately greeted by someone as special as the handcrafted timepieces on display: Olivier Audemars, the great grandson of Audemars Piguet co-founder, Edward Auguste Piguet.

He is a physical representation of what makes the luxury Swiss watchmaking house so rare in today’s world of mass-fabrication. Audemars Piguet is still, to this very day, a family-owned company that has been passed down from generation to generation and follows a strong tradition of making sure each piece is hand-crafted inside and out.

“Today you are standing in an artistic rendering of the Vallée du Joux [the birthplace of Swiss watchmaking and home to the village of Le Brassus where Audemars Piguet was created] in wintertime,” said Oliviers Audemars as he walked us through this year’s booth. “It’s all about capturing the essence of the ice and snow we get in the Vallée du Joux for around six to eight months a year.”

So you’re probably thinking: what’s the connection between winter and watches? When the first settlers first arrived in the Vallée du Joux, they were confronted with a tough environment. The area was quite isolated and little could grow due to the terrain and wintry weather but this did give them one thing: time. The time to cultivate, nurture and perfect their craft.

“Our ancestors had to find a way to make a living,” explained Audemars. “So they developed this craft of making small, complex objects that they could easily export and sell. They wanted to be able to live freely and independently and found that the art of horology allowed them to live as they wanted to.” After generations of watchmaking, Audemars’ great grandfather decided to join forces with Jules-Louis Audemars to continue this tradition in 1875.

“What makes Audemars Piguet so unique is that we think in terms of generations. It’s not about ownership but stewardship. Everyone in the company and every watchmaker helps to create the Audemars Piguet DNA.”

Audemars agreed that we don’t need a mechanical watch to tell the time anymore but is also not worried about the future of the industry despite the arrival of smartwatches: “We are surrounded by objects that we don’t understand, are produced in nameless factories and become obsolete the day you buy them.”

“We’re not making instruments to tell the time, we’re making unique, handcrafted pieces that actually talk to and mean something to people.”

With a tradition that started over 250 years ago, Audemars Piguet continues to explore the connection between contemporary art and watchmaking in order to create exquisitely handmade pieces, which are coveted by anyone who appreciates the truly personal value of mechanical watches.

Art Luxury Watches Audemars Piguet Art Basel Hong Kong Art Basel 2015 Olivier Audemars
Yi Li Dawson
HK Editor
Yi Li is your typical half-Brit half-Chinese hybrid with a serious case of wanderlust. When not writing, she's either on the hunt for the best new cocktails, on a hike or enjoying a sinful bowl of truffle fries (and working them off at XYZ). Follow her @yilidawson on Instagram or Twitter.
Sign up for our newsletters to have the latest stories delivered straight to your inbox every week.