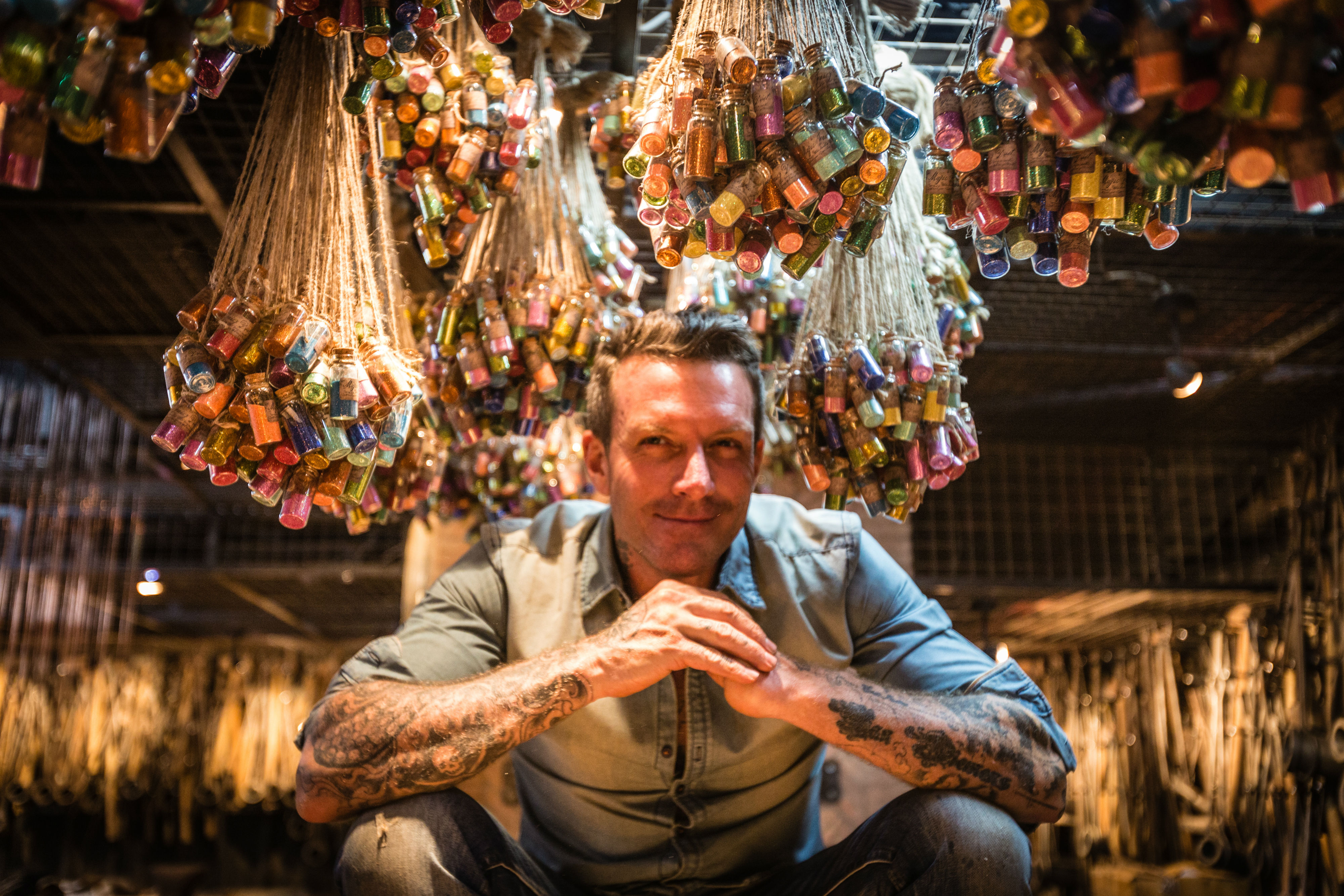 Q&A: Ashley Sutton, designer of Ophelia and The Iron Fairies

Living
Q&A: Ashley Sutton, designer of Ophelia and The Iron Fairies
Share this article
Next article

Ashley Sutton is Bangkok’s (and now Hong Kong’s) resident nightlife genius, though he wouldn’t like it if you called him that to his face. Having crafted the exquisite and intricate interiors for Ophelia, J.Boroski and, most recently, The Iron Fairies, Sutton has already left a deep imprint on the local bar scene. Earlier this month, not long after The Iron Fairies had opened to the public, we sat down with the designer for a wide-ranging discussion about his life, career and aspirations. We learned a lot, but one thing we now know for sure: Ashley Sutton is a dreamer whose ambitions go way beyond the world of bars.

You’ve opened three bars in Hong Kong now, after designing many places in Bangkok. What made you want to do work here?
I just got a phone call. That was it, I finally came up here because of the offer to design a space. Otherwise, I wouldn’t have come.

With J.Boroksi and The Iron Fairies, you were working from templates that had already been created in Bangkok, but Ophelia was completely original. Where did that concept come from?
I wanted to capture a feeling of the romance of the Far East, a bygone era I suppose, with the beauty of the peacock. The owners didn’t really know what I was going to do, so I just started doing it, didn’t really tell them. They believed in me anyway. I wanted to attract a bit of beauty and [make a] bit more of a girly space.

Did you feel you had 100% creative control there?
Yes, totally.

So they just said, ‘Do whatever you want’?
Sure, I don’t do jobs unless that’s the case.

Have you ever had to exit a project because that wasn’t the case?
I’ve had to stop my creativity and give up and just finish it, which is a shame, because the owners couldn’t see the foresight. I’ve had to do that a couple of times, but that’s about it. All my places go over budget, but they all pay back, so I make sure they do make money.

Do you have a project you’ve worked on that you might call your favourite?
No, not yet, I think it’s still to come. Ophelia’s probably 80% of what I wanted. In the end, it was just taking too long and I had to compromise on design. When I walk into the space I can see what was supposed to be there, so it’s a little bit sad, but I hope it’s not too bad.

It seems to be pretty popular!
Yeah, it’s a got a bit of its own personality I think, its own soul.

Do you care about bars? Do you want to own any bars?
No, no way in the world. I don’t like bars. I don’t like designing bars. I’d rather design a spaceship or an underwater submarine or a massive hotel or a resort. But unfortunately, I’m stuck in this bar-design business.

Have you had any opportunities to design outside of bars?
No.

But that’s your goal?
Yeah. Look, I think I’m a lot better than bars. I mean, this is like 1% of my creativity that I can put into a bar. It’s really frustrating.

Do you think there’s something about being known as a bar designer that’s kind of depressing?
Sure, totally. I hate it.

I get that sense.
I hate it. Anyone can do a bar.

What would you prefer to be known as?
Me? [Laughs.] I don’t know. Maybe a person with dreams who has passion and creates magic for people. A little bit of magic.

People are amazed and inspired by your designs!
Well, that’s good.

The Iron Fairies is inspired by three books that you wrote. Where did those books come from? A dream?
Yeah, I think so. A bit of dreaming. I always loved underground worlds. Not worlds, but I used to dig holes in the backyard and I’d go sit in them and smoke a cigarette when I was young. I always loved the fascination of underground secret places and also loved the the magic of flowers and gardens. So I think that’s where The Iron Fairies books came from. That and a bit of depression, which brings out a lot of creativity in me, as well as positivity.

You’ve lived in Bangkok and New York. Do you have any favourite cities? If you could live anywhere in the world, where would it be?
I have a beautiful, 200-year-old house on the ocean in Freemantle. That’s probably my favourite place to live. Work-wise, I’d go back to New York tomorrow, for creativity. It’s so inspirational for art and energy and architecture. But if I was settling down and whatnot, I’d go back to my beautiful place in Freemantle on the ocean.

What made you leave New York?
I got bored. [Laughs.] I designed this beautiful space for eight months. When I finally finished it, we had lines out the door. I made a little secret hole behind the back wall and I was just in my office looking at customers, and I was so bored with myself. So I’m like, ‘OK, let’s build a factory in Bangkok’. And then before I knew it, Bangkok was so busy and New York was just one store, so I just let it go away. Couldn’t even be bothered with it, because I was so busy, and that’s the truth of the matter. Back then, I didn’t know that Iron Fairies was [going to become] a marriage with F&B. If I had known, I never would have come to Asia in my whole life.

That’s surprising to hear.
If I had known that, I would still be in New York today, 100 million percent.

Is it true you don’t drink any alcohol?
I drink a little bit now.

What was your reason for not drinking before then?
I drank a beer when I was 14 and I was sick with a headache and it tasted awful. I avoided alcohol my whole life. It didn’t make sense to me, I didn’t like that feeling of losing my mind. I had a girlfriend, my first girlfriend, very late at 25, and she used to drink a lot and we never used to get along because she used to go out. After she left, I forced myself to slowly have a sip of wine I suppose and, uh, it actually relaxed me a bit, so yeah.

But I imagine you don’t like to get drunk.
I’ve never been in my life, never will. I never will in my whole life. That’s 100 percent.

Would you ever spend any of your personal time in a bar?
No! No way, mate. Last place I want to be.

This interview has been edited and condensed for clarity and length.

Designer Bars Design Q&A Nightlife Ashley Sutton Interviews Dining Concepts J. Boroski Ophelia The Iron Fairies
Michael Alan Connelly
Head of Digital Content
A Chicagoan by birth and a New Yorker by habit, Michael has more than a decade of experience in digital publishing at leading titles in the U.S. and Asia. When he's not checking out Hong Kong's newest restaurants and bars or jet setting around the globe, you'll find him hanging out with his dog Buster and enjoying an Aperol Spritz.
Travel Hotels Restaurants Cocktails Culture Italy Art Music Cheese
Sign up for our newsletters to have the latest stories delivered straight to your inbox every week.