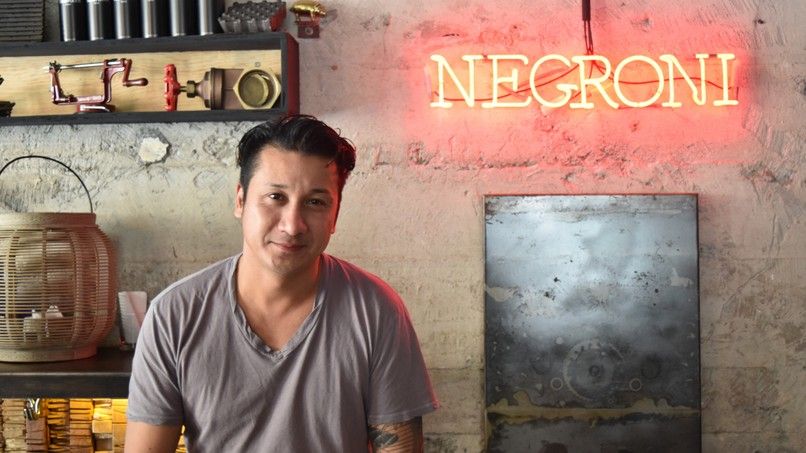 While sipping on Negronis in cool Sheung Wan hangout Mitte, talent curator, DJ, entrepreneur, creative director and our latest tastemaker, Jason Swamy chatted to us about growing up in Hong Kong and how “you’re not exactly groomed or inspired to do anything creative. You’re generally conditioned to go down the regular 9 to 5 route.”

“I was deeply passionate about music but I didn’t realise or understand there was a career in any of that so I always just kept it in my back pocket.”

A bedroom DJ throughout college, Swamy had a brief stint in a digital marketing agency before turning his attention to the nightlife scene in New York City. He now runs Do What You Love, an events and entertainment agency that curates talent and events in Southeast Asia, and is also the creative director of the Wonderfruit festival in Bangkok.

Growing up… I saw DJ Lee Burridge play in Hong Kong and that changed my life forever. I’ve always been passionate about music and after college I started doing more and more events and ended up having one of the most seminal nights in New York.

I moved too quickly… and opened up my own nightclub. We had a dream team of people put together but we didn’t have an aligned vision so it didn’t work out. We had Justice, Steve Aoki and Kings of Leon play for us and people like Coldplay and Matt Damon who used to come to my club and hangout after 4am. We also had a kitchen that was never used so we lost a lot of money but I learned a lot.

I spent two years in India… to help my family’s garment business and learned how to run a factory. Moving from the crazy nightlife scene in New York to the middle of nowhere in Chennai was very humbling and enlightening. I learned how to be create in a box and there’s a responsibility with creativity if you want to succeed.

In Hong Kong… I started to book acts such as M.A.N.D.Y for a series of techno nights with as there’s nowhere in the city to go to that has good music. Paul Kinley is also very passionate about music and he invested some money into our first party. This turned into Small & Tall and then my experience design agency, Do What You Love.

I’ve been partying my whole life… but as you get older, you want to do something with a purpose and the guys at Wonderfruit really resonated with me. We share a similar vision and passion for music, sustainability and eco issues. Going green is never going to go out of style and music is one of the most powerful forces in the world.

Making it in Hong Kong… is difficult because the rents are high, you have a lack of space and there’s no creativity. The city moves from one hegemony to the next. One person will decide to open a ramen restaurant and then another hundred will open. Then frozen yoghurt will be the next trend and there’ll be another hundred variations so you’re not really getting any better, you’re just moving from one hegemony to the next. The great thing about Hong Kong is that you can innovate and be at the top of your game.

My favourite places in Hong Kong… are all places where you can eat. I love the seafood restaurants in Lei Yue Mun, I took Skrillex there and he loved it, local congee stalls, BEP and Sunday’s Grocery.

Hong Kong Tastemakers Wonderfruit Jason Swamy
Yi Li Dawson
HK Editor
Yi Li is your typical half-Brit half-Chinese hybrid with a serious case of wanderlust. When not writing, she's either on the hunt for the best new cocktails, on a hike or enjoying a sinful bowl of truffle fries (and working them off at XYZ). Follow her @yilidawson on Instagram or Twitter.
Sign up for our newsletters to have the latest stories delivered straight to your inbox every week.