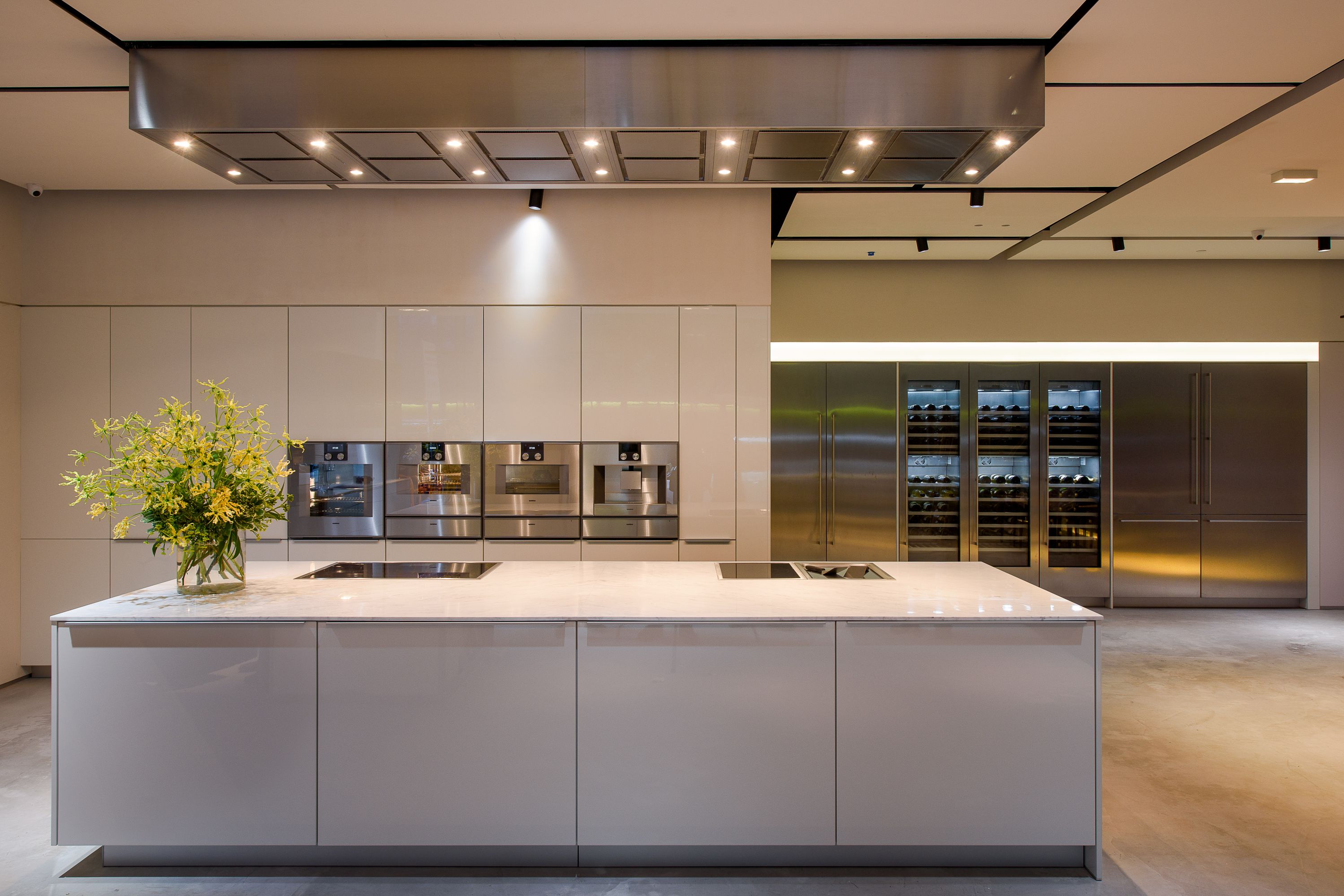 If you’re looking to transform your home kitchen from stale to sensational, you’ll want to step into the hallowed halls of Kitchen Infinity’s newest KI Cubus showroom, now open in a slick space in Causeway Bay. Founded in 1986, Kitchen Infinity is the brainchild of CEO and entrepreneur Sandra Wong, and is a stalwart name in the world of luxury kitchenware in Hong Kong. Like some sort of temple of designer kitchen essentials, the new space opens up through impressive, full-height double doors, while the glass facade allows the clean lines of the kitchenware designs within to lure passers-by. As Kitchen Infinity’s second showroom, it debuts with two of the kitchen interior scene’s most worshipped heritage brands, Gaggenau and Poggenpohl. Celebrating its 333rd anniversary this year is Gaggenau, known for its iconic, avant-garde ovens and specialised kitchen tech. Coincidentally, it’s also the 30th anniversary of its most iconic appliance; kitchen geeks will want to head over to the showroom to check out the newly refashioned 90cm-wide oven — the EB 333 — with all the latest upgrades that were unveiled at EuroCucina 2016 in Milan. Another gadget coveted by some of the best chefs around the globe is the 400 series Combi-steam oven — the first automatic self-cleaning oven on the planet — as well as vacuum drawers exclusively designed for efficient and precise sous vide cooking. The other notable kitchen brand showcased at KI Cubus is Poggenpohl, which made its mark on design lovers in 2014 with its streamlined Porsche design kitchen P’7350, also exhibited at EuroCucina. Known as the oldest kitchen brand in the world, Poggenpohl was founded in 1892 and claims to be the creator of the unit kitchen, the first white-lacquer kitchen furniture and the first kitchen island. These days, its prized kitchen cabinets, storage and surface solutions are known for their clean lines and fashionable aesthetics, as well as lifetime durability. You can look forward to more of that at KI Cubus with its newest series of fully customisable units: +STAGE (pictured), +ARTESIO and +SEGMENTO, made to be tailored to personal habits and preferences. Inviting scores of some of Hong Kong’s best chefs and mixologists to its grand opening, Kitchen Infinity is also hosting a monthly series of Culinary Artisan Master Classes for home chefs. Past events were three-hour-long lessons led by two-Michelin-starred Chinese chefs: Mok Kit Keung of Kowloon Shangri-La’s Shang Palace, and Ip Chi Cheung of Island Shangri-La’s Summer Palace. Upcoming masterclasses are yet to be announced, but you can expect the likes of discerning guests such as Vicky Cheng from VEA, Richard Ekkebus from Amber, and May Chow from Little Bao and Happy Paradise to teach you a few useful tricks.

Further details on master class schedules will be announced on the Gaggenau Hong Kong Facebook Page, or you can email info@kih.com.hk to find out more.