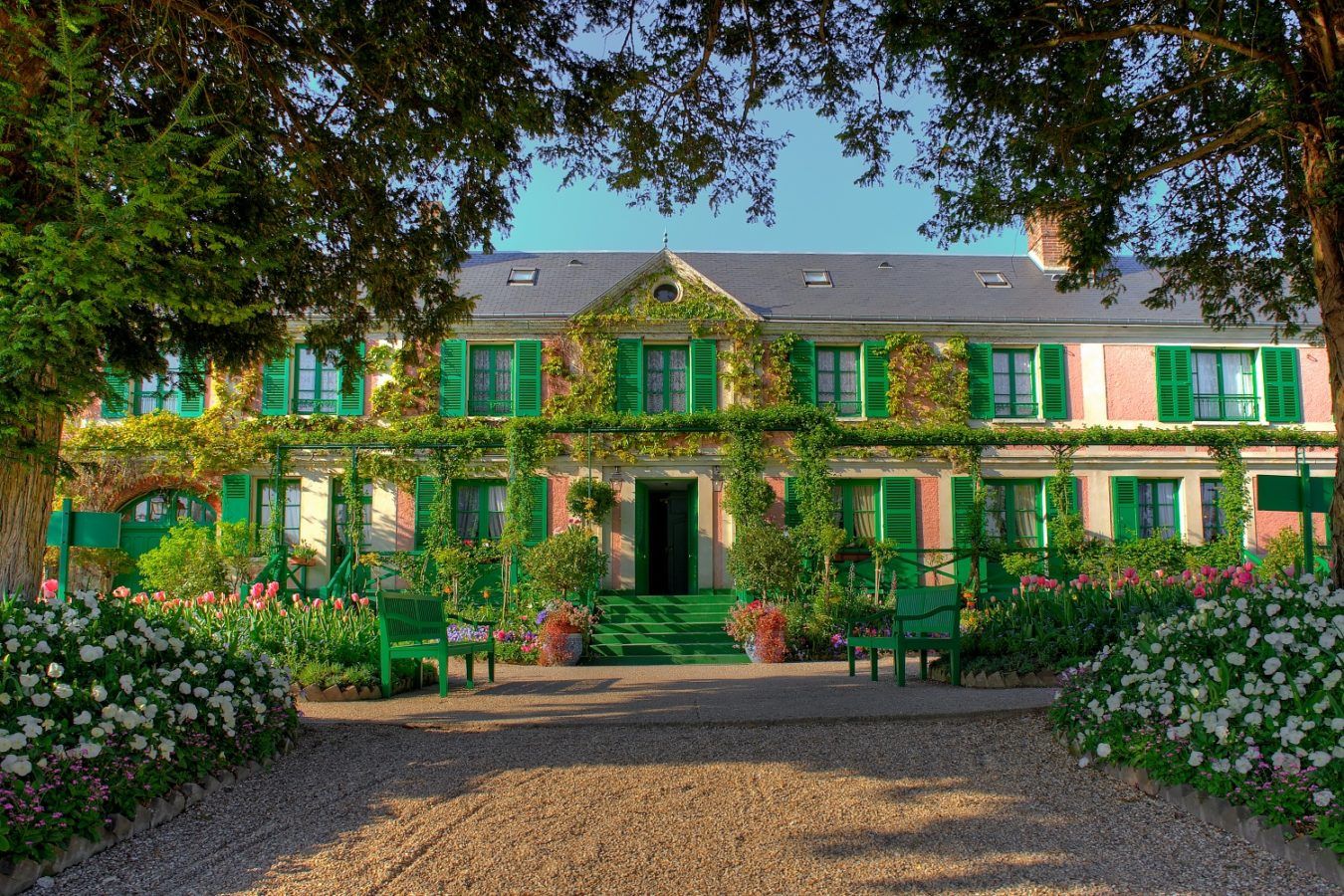 Home is where the art is — whether they’re in the heart of a teeming city, an arid desert landscape or the lush French countryside, the homes of great artists have often stimulated the creative urge.

We explore the homes of Claude Monet, Georgia O’Keeffe, Frida Kahlo and Jackson Pollock and Lee Krasner for some creative inspiration.

The Impressionist artist Claude Monet lived in Giverny, around 80km northwest of Paris, for 43 years. The village – and Monet’s house and garden – were the subject of many of his paintings, and were landscaped by the artist himself before he painted them, thus, in a sense, creating them twice. There are two main parts to the grounds, starting with a flower garden in front of the house called Clos Normand, which was planted after Monet’s arrival with an orchard, fruit and ornamental trees, climbing roses and a mix of simple daisies and poppies with other more rare varieties.

Ten years after moving to the area, Monet bought additional land across the street and created a Japanese-inspired water garden, where he painted the bridge covered with wisterias, other smaller bridges, weeping willows and the famous nymphéas (water lilies) that bloom all summer long. His family lived in the grounds, while Monet himself used a barn as a studio.

Visitors can glimpse the blue sitting room, two-toned yellow dining room, and even the bed where the artist died in 1926 at age 86. The grounds fell into disrepair after Monet’s death, but a concerted effort and restoration were made in the 1970s. It opened to the public in 1980, though advance reservations are currently required to visit.

Georgia O’Keeffe, known for her vivid nature paintings, called the American Southwest home for more than 40 years, after moving there in 1943. Her first trip to northern New Mexico was in 1929, and she visited the area during the summer for the next 20 years. She finally settled there in 1949, three years after the death of her husband, photographer Alfred Stieglitz.

O’Keeffe lived and painted in Abiquiú, some 80km north of Santa Fe, the New Mexico capital. Much of her work was inspired by the area’s desert landscape, as well as its Native American and Hispanic cultures. Her paintings of sun-bleached skulls with backdrops of bright blues or muted earth tones were inspired by the surroundings of her adobe home and studio. The house itself was an inspiration, with one of its doors being the subject of more than 20 canvases, as were the cottonwood trees that grew in the Chama River Valley below her studio.

According to the website of the Georgia O’Keeffe Museum in Santa Fe, which houses the artist’s paintings and works on paper and runs the Abiquiú studio site, her paintings “coincided with a growing interest in regional scenes by American Modernists seeking a distinctive view of the nation”.

“The house, painted blue inside and out, seems to shelter a bit of sky,” wrote poet Carlos Pellicer about the Blue House, or La Casa Azul, the long-time home of Mexican portrait and self-portrait painter Frida Kahlo. The artist lived on the property for most of her life, first with her family and later with her artist husband, Diego Rivera. The house and gardens are preserved as the artist left them, with many of her personal items and furniture on display, including a selection of her dresses.

Pellicer, who was close to the couple, catalogued the contents of the home for the museum, and now visitors can see work by both Kahlo and Rivera, as well as their personal art collection, photographs, documents and books. The grounds also feature pre-Columbian sculptures, of which Rivera was an avid.

Kahlo also wanted to make sure her legacy was preserved, and wished to give the home to the country of Mexico. Rivera organised the museum after her death in 1954 and it opened in 1958. Reservations are required at the museum, and virtual tours of the galleries and lush landscaped gardens are also available.

Abstract expressionist painters Jackson Pollock and Lee Krasner shared a home and creative space in East Hampton on Long Island for more than 10 years, with Krasner living and working there part-time for close to 30 more. The artist couple moved to the area, a coastal retreat for New Yorkers, in 1945, just two weeks after they were married in Manhattan. Each of them had their own studio space: Krasner’s was in the back parlour, while Pollock painted in an unheated bedroom and, later, a barn behind the home. The artists made a number of improvements to the property, including a winter-proofing in 1953 that involved a new floor for Pollock’s studio. Fast forward about 25 years, and that treatment was removed to reveal remnants of some of Pollock’s most famous poured paintings, such as Autumn Rhythm, Blue Poles and Lavender Mist. Krasner’s dynamic gestural paintings, including Gaea and Siren, are also on view to visitors at the Pollock-Krasner House. A virtual-reality tour shows where several works were created and includes a recording of the artists discussing the creative process. Krasner continued to divide her time between New York and the Hamptons after Pollock died in 1956, until a few years before her death in 1984. Guided tours at the house, which opened as a museum in 1988, are available by reservation.

Artists Home Décor
You might also like ...
Culture
The who’s who at Art Basel Hong Kong 2021 and some of our favourite looks
Living
The world’s most Googled homes
Living
8 interior design podcasts to help you decorate your home
Living
How to Succeed: Laura Hammett, Creative Director of London interior architecture & design studio
V.L. Hendrickson
Interior Design
Sign up for our newsletters to have the latest stories delivered straight to your inbox every week.