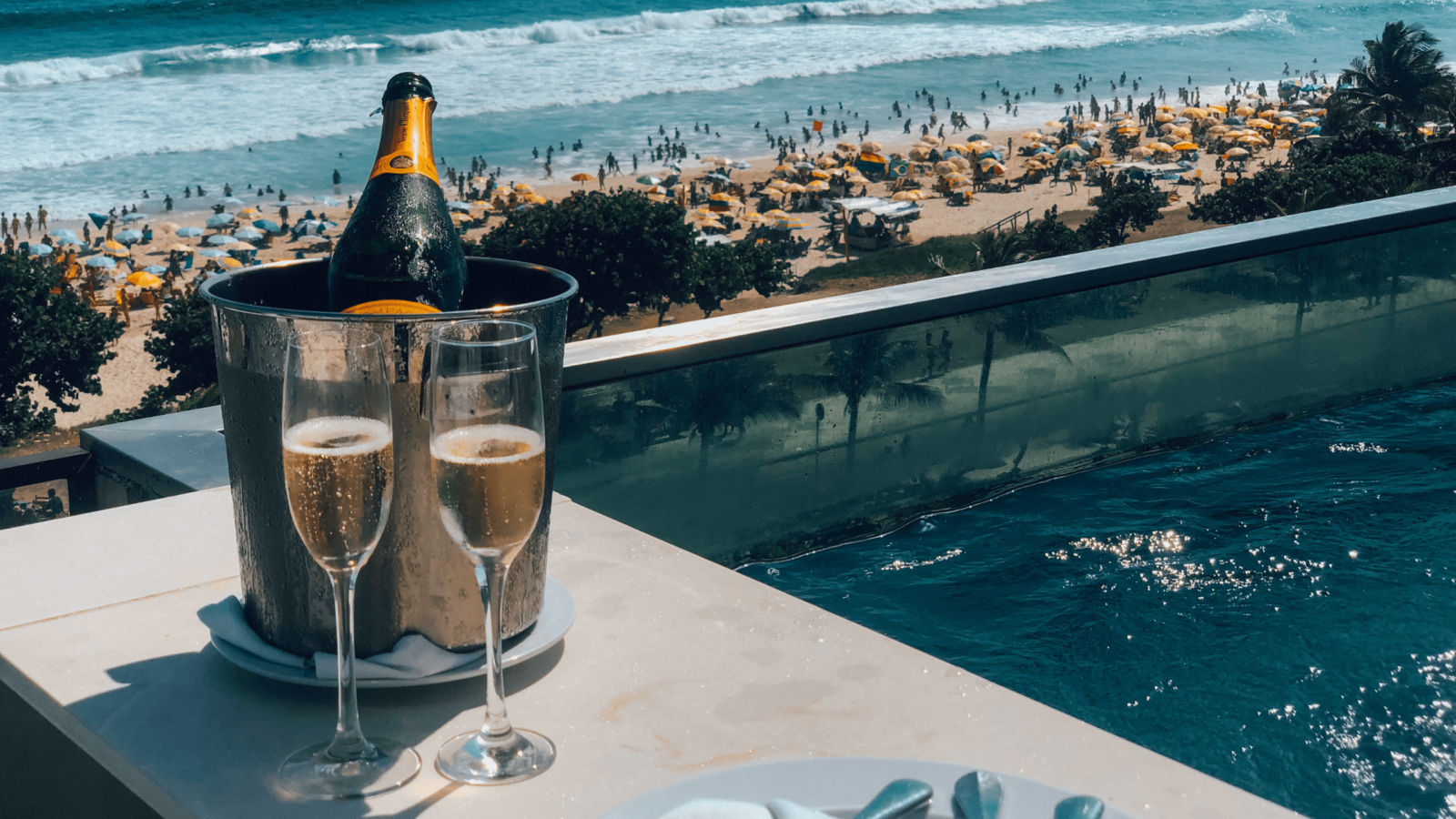 These are 8 of the most expensive penthouses in the world

Living the dream at the most expensive penthouses — imagine the views.

From private pools to designer interiors and exclusive services, these residential spaces come with amenities most can only dream of. The views they afford are breathtaking and the privacy is a plus. Of course, all this comes at a high price. We give you a glimpse into some of the most expensive penthouses in the world.

La Tour Odéon is a skyscraper in Monaco located next to the country’s border with France. Inaugurated in 2015, the building designed by the Monegasque architect Alexandre Giraldi is one of the tallest in Europe at 170 metres height. Its Sky Penthouse is widely considered the world’s most expensive penthouse. In 2016, the five-storey penthouse, which occupies the top of the 49-storey Tour Odéon, was put on the market for a reported US$335 million (about RM1.481 billion).

Measuring 3,500 square metres in area, it has a kitchen on every floor, a rooftop deck, cinema, library and an infinity pool. There is also a water slide that begins from the dance floor and goes directly into the pool. The owner of the penthouse gets access to the exclusive private chauffeur, caterer, a 24-hour concierge service and three staff bedrooms.

The One Hyde Park is a set of four diamond-shaped buildings in the Knightsbridge area of London. Its location — between Buckingham Palace and Kensington Palace with the Hyde Park next to it — makes One Hyde Park one of the costliest addresses in the world. There are four penthouses and 86 apartments across all buildings. The total area for all penthouses measures up to 30,000 square feet.

The amenities provided spell luxury at another level. A wine cellar, golf simulator, private cinema, spa with swimming pool, sauna, steam, squash court and gym are just some highlights. There is also a 60-member team of the Mandarin Oriental hotel, located next to the complex, deployed at One Hyde Park 24 hours a day to help residents with gourmet cuisine, beverages, room service, doorman and on-site concierge services. The top-notch security staff is trained by the members of British special forces SAS.

In 2014, the Daily Mail reported that one of the penthouses was sold to an Eastern European buyer for £140 million (about RM822 million) making it the most expensive flat ever sold in Britain at the time. Four years later, The Sun reported that property tycoon Nick Candy, who constructed One Hyde Park along with his brother Christian, mortgaged his penthouse in the complex for £160 million (about RM940 million).

When the building is designed by renowned Canadian-American architect Frank Gehry, you know that the asking price of a house will be as high as the luxury quotient. The penthouse also called the Presidential Unit, is at the top of the 12-storey high Opus. In 2015, it sold for HK$509.6 million (about RM277 million), making it the costliest ever sale of an apartment in Asia.

Opus is located right in the middle of Hong Kong Island in The Peak Area, near Mount Cameron and Wan Chai Gap. Its 5,444 square-foot penthouse has its own 1,508 square-foot rooftop with a Jacuzzi. It also has a study, powder room, two parking spaces and four en-suite bathrooms. The building also offers electric car charging systems.

The helical external structure of the building ensures that light flows into every apartment at any level. From the top, the views of bustling Hong Kong and its natural surroundings become even more breathtaking.

A top-floor penthouse at the One Palm was sold in 2017 for US$27.56 million (about RM116 million), making it the most expensive penthouse sold in Dubai. The property was reportedly bought by a Gulf Cooperation Council (GCC) member.

Built by Omniyat Properties at the entrance to the world-famous Palm Jumeirah, the ultra-luxe residential apartments offer spectacular views of Dubai Marina, the Jumeirah as well as the Persian Gulf.

It is managed by Dorchester Collection, a 5-star hotel operator. Its architect is Michel Abboud of SOMA. The interiors have been done by Japanese firm Super Potato and London’s Elycion, which is also the designer of One Hyde Park. The luxurious, spacious and sophisticated interior of the penthouses is also the work of Elicyon. Landscape architect Vladimir Djurovic created the spectacular greenery that is a hallmark of One Palm.

Among the amenities is the 12-seat state of the art indoor cinema, business lounge with private meeting room, private jetty, gym, sauna, ESPA managed spa, swimming pools, library and hair salon. There is a 100-metre long stretch of private beach for the residents, a private restaurant and beach club facilities.

In 2019, Omniyat Properties sold a second penthouse in One Palm. According to reports, the 20,000 square-foot penthouse was sold for US$20 million (about RM84 million). The five-bedroom apartment has an exclusive rooftop terrace.

The Wallich Residence, which is part of the Guoco Tower, begins from the 39th floor at 180 metres and rises to the 64th floor at 290 metres above sea level. It has a collection of 181 luxury residences, including one- to four-bedroom units, four penthouses and one exclusive super penthouse.

Located directly above the Tanjong Pagar MRT station, the Wallich Residence is built by property company GuocoLand and is part of an integrated development that also includes Sofitel Singapore City Centre business hotel, a 100,000 square-foot retail podium, the 31-storey Guoco office tower, and an urban park of 150,000 square feet.

The top three stories of the Wallich Residence make the super penthouse. Measuring 21,108 square feet, the five-bedroom space comes with a private swimming pool and deck, jacuzzi, private entertainment area, bar, 600-bottle wine cellar and a private lift from the basement car parking straight into the apartment. There is an en-suite bathroom with each bedroom and spacious closets in the master and junior master bedrooms. There are separate dry and wet kitchens. The owner of the penthouse gets a dedicated butler and concierge service.

Dyson founder Sir James Dyson purchased the triplex in 2019 for Singaporean $73.8 million (about RM230 million) but sold it the very next year for S$62 million (about RM193 million) reportedly to co-founder of IT provider SHI International Leo Koguan.

The luxurious penthouse sits on the 43rd floor of the 191 metres tall ANZ Tower and offers a 360-degree view of Sydney, including its famous harbour. It has four bedrooms, a gymnasium, cigar room, conference room, fully-fitted marble kitchen, five marble bathrooms, swimming pool, 24-hour security and a private express lift.

Architect Richard Francis-Jones and interior designer Blainey North combined forces to give the penthouse its sleek look, marked by high ceilings and massive glass windows that bring in enough sunshine to brighten every corner. The furniture includes many Art Deco pieces. No wonder that the International Design & Architecture Awards named the sprawling three-level penthouse the world’s finest residence in 2017.

Property developer John Boyd and his family own the place. In 2018, it was listed for Australian $66 million (about RM205 million) on the market and has since remained unsold.

The reason why One Thousand Museum looks like a masterpiece in modern architecture with its curved exoskeleton design that holds the glass fibre reinforced concrete structure is because it was designed by Zaha Hadid. The 62-storey building is the Iraqi-British architect’s only work in the Western hemisphere.

The residences are fitted with appliances and hardware by some of the renowned companies such as Gaggenau Hausgeräte, Sub-Zero, Dornbracht and MTI. The illumination is customised by German industrial and interior designer Uli Petzold and the automation of several features by lifestyle technology company Crestron.

One can soak in the pleasing views of Biscayne Bay, the Atlantic Ocean and the Miami skyline from the heights of the One Thousand Museum.

In mid-2020, a penthouse on the 50th floor was put up for sale for an asking price of US$18.8 million (about RM79.6 million). Measuring 11,500 square feet, including a terrace, it is also the first and only full-floor penthouse in the building that was placed on the market fully furnished. Besides other facilities, this apartment has a gym and home office.

The most illustrious owners of these expensive penthouses known so far are David and Victoria Beckham, who reportedly purchased a full-floor penthouse at one of the higher levels measuring more than 10,000 square feet.

How about having Novak Djokovic as your neighbour? The Serbian tennis legend owns a condo in the beautifully designed Eighty Seven Park, which directly overlooks the Atlantic Ocean. Designed by renowned Italian architect Renzo Piano — his first in the US, the building stands 233 feet in height and has 70 residences spread across 18 floors.

Renowned landscape architects West 8 redesigned a 35-acre North Shore Park to the south of the building for the residents and created an expansive private garden for those in the north end. There are Wolf and Sub-Zero appliances, Zucchetti bathroom fixtures, vanities and other accessories in the residences. Other features include ten-foot ceilings and unobstructed views of the ocean, park and Miami skyline. Many houses have massive sundecks, which are basically terraces almost as big as the interior surface area.

In 2018, a penthouse here was listed for US$68 million. It measured 12,410 square feet with an additional 18,000 square feet of outdoor terrace, together making it the largest penthouse space for sale in Miami. Located on the top floor, this one reportedly has six bedrooms and 11 bathrooms. There are two infinity pools — one gives a beautiful view of the sunrise and the other of the sunset. Last but certainly not least, there is also a personal Turkish hammam in the penthouse.

Antilia to Villa Leopolda: 10 of the most expensive houses in the world