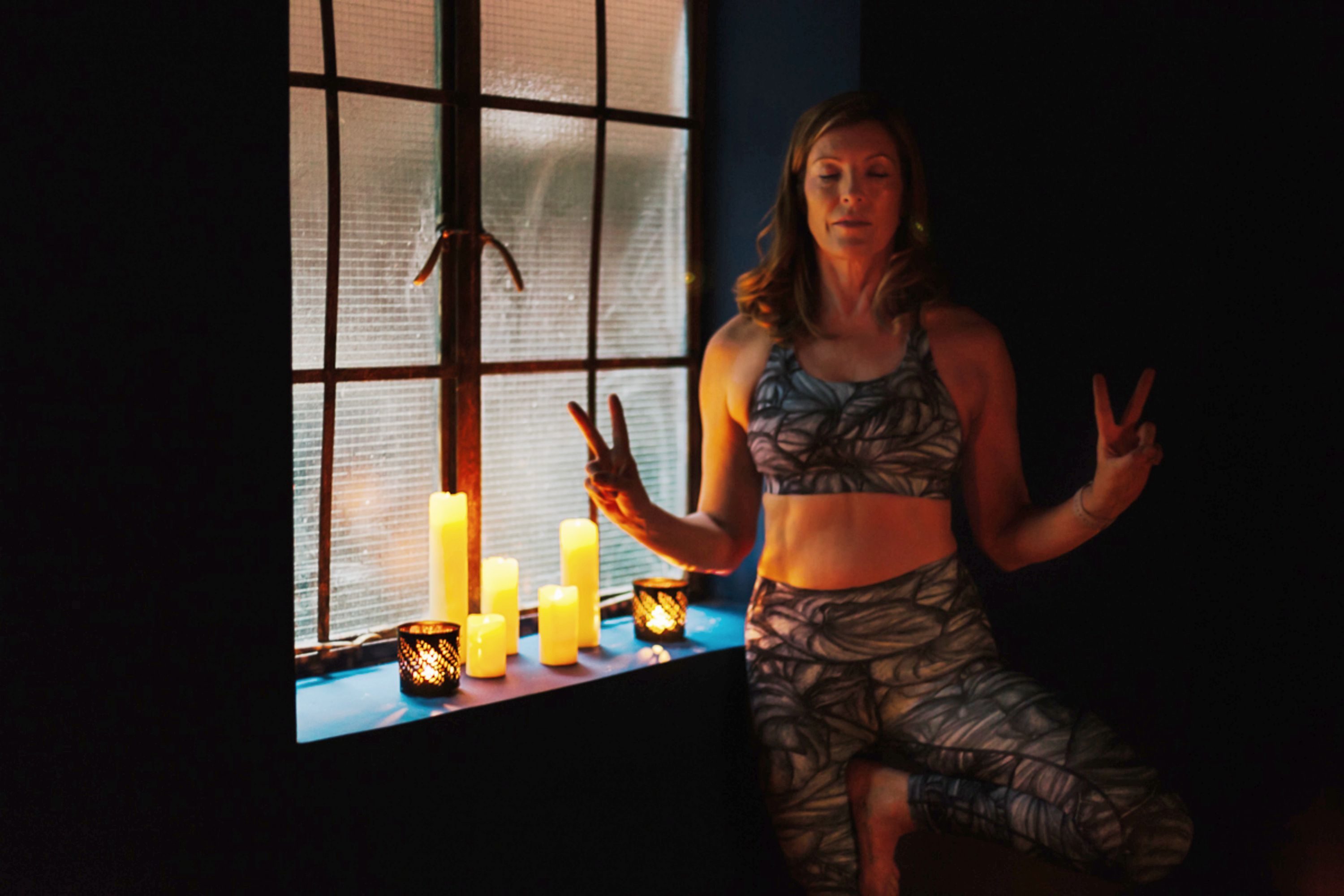 If you’ve ever found it difficult to commit to a yoga lifestyle, IAM Yoga IAM might change your mind. “In terms of practice, I have followed that traditional path of being on and off yoga for many years,” owner Jodes Filleul tells me in her echoing, unconventional Sai Ying Pun studio.

She opened the space in the beginning of the year on the ground floor of a grungy commercial building in Sai Ying Pun — not exactly the likeliest of locations for a yoga studio. Contrasting with its surroundings with warm and cosy interiors, IAM Yoga IAM is also an unorthodox studio for its rhythmic, uptempo soundtrack. Whereas usual yoga studios play flowing instrumentals and bird sounds, Filleul’s studio basks in all of the rhythm-thumping, soulful glory of hip hop and R&B (French hip hop fans may realise that the “IAM” is an homage to the Marseillese rap group of the same name).

Before moving to Hong Kong in 2016, she spent more than 10 years running her own marketing consultancy in Melbourne after a long stint in advertising. “I had been coming to Hong Kong a lot on my consultancy business, and it just came to me that this was the place, this was where I needed to go and challenge myself. I didn’t want to be just another hip hop studio in my hometown, but to actually create a community in Hong Kong,” says Filleul. She promptly got her yoga teacher training underway, and the rest is history.

Between her corporate life and the rollercoaster of being both enamoured and bored by the yoga she was doing, Filleul finally found her moment of awakening when she took hip hop yoga for the first time in Melbourne. “The real significant moment for me was when I went to a hip hop yoga studio that had just opened in Melbourne,” says Filleul.“The first class that I went to, we came into uttanasana, which is ragdoll pose (a forward bend) at the front of the mat. The first song that came on was Salt N Pepa’s “Whatta Man,” and I just hung in ragdoll thinking, I have found my spiritual home, this is it for me. I became a convert straight away.”

Previously, Filleul admits that she enjoyed yoga, but never found a passion in it until that very moment. “I’ve tried bikram (hot) yoga and I thought no, that’s too harsh. Every other lineage that I’ve tried, like hatha (strong focus on breathing), just bored me. Even the vinyasa (flows) that’s practiced, it can be quite slow, and they can be almost monotone teachings,” says Filleul. “Bringing the vitality of music into yoga really resonated with me, because I already had that connection with music. I just felt so awesome and happy at the end of each class. That combination of music and yoga is so simple, and so brilliant.”

Her studio IAM Yoga IAM is split into two parts: downstairs, the “Smalls” studio is for private lessons, and upstairs, painted in darkness is the “Biggie” studio where all the regular classes take place in candlelight. “Having that darkness takes away the notion that people have to ‘perform,’” she says. “It’s less intimidating. It’s fun, it’s not so serious. You don’t feel like you’re being watched.”

Rather than being led the whole way as is the norm in a regular class, Filleul guides students through two repetitions, and the third round is for students to go on their own. “That third round, the music is cranked up, and students get to flow and feel it in their own body. But if you want to spend that time in child’s pose, because that’s what your body is crying for today, you do that.”

Sitting down with Jodes with a cup of chocolate loose leaf tea, we learn a little more about her healthy habits and her journey teaching yoga.

I became a trainer… because I needed to be a part of delivering the same happiness I found. That happiness is where that service to teaching really comes in. And where it comes back threefold, is when you have people after class telling you, “That was amazing.”

My fitness philosophy… is to allow yoga to become as much of a commitment as allowing enough time to blow dry your hair and put on makeup in the morning. If you look at it like that, it becomes an everyday routine. You’d never rock up to work without your hair done and a bit of makeup on; you don’t go a day without yoga. They have that mantra, #yogaeverydamnday, and that’s where the magic really comes in, and that’s where you start to shine within. You see it in your own dealings with people, and you realise one day that you’re not reacting as you used to react. That is from yoga.

The key to staying motivated… is to be in a safe environment for people to grow at their own pace. Which is what it’s about — not growing at the supposed pace that you’re ‘meant’ to. There’s no such thing.

People who come to yoga don’t want to be babied. They want to be challenged. This allows me to present students an opportunity to take those challenges if they wish, but at their own pace. It depends on the discipline and the style you’re undertaking, but if you come to hip hop yoga, or even a smooth chill class, they’re challenging. Then we even it out by having yin yoga — because slowing down on the floor and stretching out that fascia tissue will improve your yoga out of sight.

When I workout… I have a private little grounding ritual, for myself to land and deliver the best teaching that I can that day. I just take a moment for breathing, and a mantra that I say to myself, then I can go “alright, let’s go.”

I believe in eating… vegetarian with no dairy. I’ve had two rounds of vegetarianism. The first round was purely for health. This time around, I’m actually more for the animals. It’s not that I’m an activist of any sort, but it came to a point where I thought “hmm, that’s enough meat now.” I used to be a huge meat-eater, huge bread-eater, huge cake-eater. They’re still my favourite foods, but it’s just that understanding that comes with age that those things need to be moderated. Hey, I’m French, I’m going to have bread, and I’m going to have butter. But when I do, I’m going to make sure it’s a really beautiful baguette, and very fine butter, and I’ll have it every two weeks. With cakes, I’m actually a very good baker, but I’ve transitioned to more raw healthy treats to satiate that.

For power food… I love coconut flakes, walnuts and pears.

For cheat day… Carrot cake will be the top priority on cheat day. Yes, I’ll take treats whenever there’s the opportunity — if it’s someone’s birthday, of course I’m going to have birthday cake.

My thoughts on weight loss are… that it’s silly some people say “I’m too fat to do yoga.” Here we just laugh it off because yoga’s not about that, and it will drop off as soon as you start being happy. That’s also where the darkness assists people, because you don’t see people around you, you don’t get distracted by sensory things that we are normally so reactive to. It takes away all of that.

In the end, it’s all about breathing and core. If you have your breathing strong and your core engaged, your level of yoga will accelerate unbelievably. The only reason you can stay in an inversion is through breathing and core activation, it’s nothing to do with arm or leg strength.

My favourite poses… tend to rotate, but at the moment I enjoy ardha chandrasana, which is half moon pose (a type of side plank), with a transition to chapasana (sugarcane pose, with the leg bent back and touching the arm).

When I’m not teaching or working out… Cooking is a really nice release away from yoga where I can channel my creativity. I always like making cakes because I like that measurement, that calculus. It’s foolproof when you follow a recipe. Otherwise, nature is very important to me and I’ve realised living in Hong Kong that I really need to connect with that. I also enjoy reading (which I tend to do in nature). These days, I don’t even drink anymore. I don’t crave it, because I’ve found it clouded my meditation practice. I just saw a real shift after I committed to my meditation that when a drink was offered to me, I just decided my priority was to be clear-headed instead.

My workout playlist includes… a little more R&B in the Smooth Chill, with artists like Flight Facilities and Helios. Our hip hop class is very much hip hop music: your Biggie Smalls, Nas, DJ Drez, Beyonce, RiRi, and old school stuff like Snoop Dogg, Salt N Pepa. We do a generous 8-10 minutes savasana (corpse pose) here to end the class. It’s all about having the music on, and the world off.

Follow IAM Yoga IAM on Facebook or Instagram for more updates and class schedules. Passionate and creative yoga teachers looking to improve can look forward to a two-day Creative Sequencing Workshop on 24-25 September by US yogic sequencing expert Shannon Marconi.