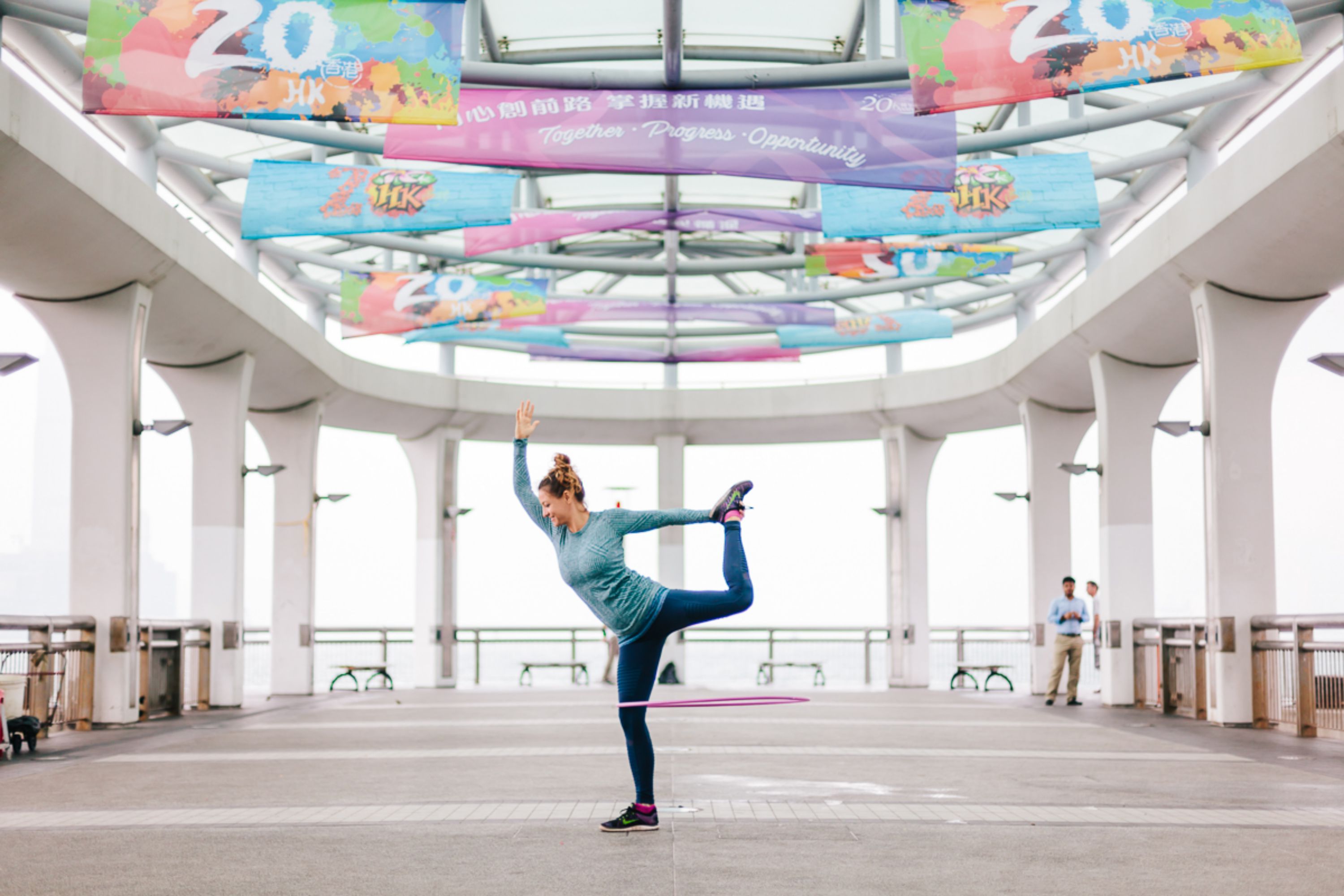 Hula hooping may seem like just a schoolyard hobby, but over the years the hooping movement has branched out from the US into a global fitness phenomenon, spurring everything from hula hoop dance classes to hula hoop yoga.

As the founder of Hong Kong’s first hula hoop dance company Turning Circles<, Emma Brown’s story from getting her yoga teacher certification to being the first to teach hula hoop dance classes in Hong Kong began with an impressive wedding gift. “I started in 2010, when one of my friends did a fire-hooping — that’s hula hooping with wicks lit on fire —  performance at my wedding, and she gave me a hula hoop as a present!” says Brown.

Soon after her wedding, Brown moved to Nakhon Si Thammarat, just four hours south of Koh Samui, Thailand, where she began immersing herself in her newfound hobby alongside teaching English. She also attained her yoga teacher certification from Rishikesh, India, the yoga capital of the world, in 2012. She says, “I started teaching hoop as soon as I started learning, but it was very unofficial. I learned a lot from YouTube in the beginning, especially as there weren’t any classes, there wasn’t anyone else doing it in Thailand.” Brown also began teaching friends her newly learnt tricks, and concurrently started a kid’s hula hooping class.

Four years ago, she took her talents to Hong Kong, where she moved with her husband as well as enrolled in a Master’s of Education at the University of Hong Kong. At the same time, she started a weekly meetup group for hula hooping. Through the group, she started getting requests for official classes as well as performing at events, resulting in what became an overwhelming schedule. “I started doing that, teaching yoga on the side, and doing my Master’s, and working full time. I was like, ‘okay, something’s gotta give here.’” She says, “I saw it as an opportunity to go full time on yoga and hula hooping, so that’s what I did in January 2015. It was the best decision I ever made.”

We sat down with Brown to chat more about how she came to develop a passion for the unconventional sport, and to get her advice for budding athletes.

I became a trainer… because I have more fun teaching yoga than English. I really like helping other people feel good. It’s what drives me to continually improve my classes as well. I got my yoga teacher certification in 2012, and that’s when I tried to focus on specific skills I was wanting to develop, to the point where I could share them. When I teach my classes I really encourage people to go at their own pace. I often offer different variations to encourage people to do what feels good. That’s how you can safely learn.

My fitness philosophy… is just to feel good. I think it’s important for people to find exercise that they like to do, otherwise they’re just not going to do it. I like that about hula hooping and yoga; they’re kind of alternative forms of exercise that focus on mind-body connection, and it becomes very meditative to the point where you don’t really notice you’re exercising. As a kid, I was always an independent athlete, I was always horseback riding, swimming, running, I was never big on team sports. It’s still the same: hula hooping and yoga are very individually focused. I was never very competitive growing up, preferring individual sports where I could grow at my own pace. I like that satisfaction of improving myself, but not feeling like I have to compare myself to others.

The key to staying motivated… is to always try to be doing something fitness-related. I do go through lulls, but I usually try to be relaxed with myself. I think it’s important to enjoy what you’re doing — if it’s a nice day out and I don’t feel like doing yoga or hula hooping, I go for a hike. If I don’t feel like it, I’ll take a rest day. As for motivating my students, I think demo-ing is a good strategy — showing them what they can accomplish — but also reminding them to keep on practising, while giving them a clear ladder to progress.

When I teach hula hoop… I teach a tricks-based class, so I show ways to move with the hula hoop, with usually five to six tricks that flow together so it feels more like a dance. It’s not tied to choreography, but people have the opportunity to link them together at their own pace. In terms of the energy you’ll exude, it’s similar to a dance class, but with a little more toning. The class is only once a week, which makes for a nice complement to an exercise routine. People have had weight loss success stories with hula hooping, especially for people who are heavier and don’t like exercise. Because it’s a fun exercise, it’s not like you’re at the gym counting down minutes at the treadmill.

For power food… one of my favourite snacks of late are date and nut balls. You take coconut, almond, dates, cacao, a little bit of peanut butter, a little coconut oil, some chia seeds, and blend it all up and roll them into little balls. It’s very sustaining, but also very tasty.

I believe in eating… veggie- and fruit-based meals, just because it feels good. I’m not a vegetarian, but I used to be one for about 10 years, so my formative cooking years were when I was a vegetarian. I’m still not very great at cooking meat! I don’t do it that often, just a couple of times a week. It’s partly for environmental reasons too, you hear often how bad the meat industry is to the environment so I try to just limit it, and to just eat what I need.

For cheat day… I don’t have particular days, but really when I want something I’ll have it. I’ll sneak in the cheeky chocolate croissant, or the lasagna. I tend to follow the 80% rule, where you’re healthy and exercising and you stick to the routine 80% of the time, but when you want something, go for it. If you deny yourself, it becomes a mental game and that’s when you overdo it.

The best five minute exercise for weight loss… if I were to use the hula hoop it would definitely be body hooping. I do drills where you’re hooping from your waist up to your hands then back to your knees then back up. That gets your whole body involved and your heart rate goes up quite a bit.

Favourite move within hula hooping… I would say chest and shoulder hooping. It goes over your shoulders and you can add breaks and stalls. But really, I enjoy the combination, putting things together in a creative way.

When I’m not teaching… I like hiking a lot, so on the weekends I go hiking with my husband. I like cooking too, I make a lot of salads like quinoa, avocado, mango and kale, which is one of my favourites. I’ll make the occasional lasagna too.

My workout playlist includes… a lot of new music from Spotify’s Discover Weekly automated playlist. For yoga, one of my favourites is the British musician Bonobo, and for hula hooping, I like Pretty Lights.

Interested in turning a few hoops up your sleeve? Turning Circles’ eight-week Hula Hoop Dance Beginner Course (in English) is starting another round this July, with the first class on 13 July (Cantonese classes are also available). HK$1,120 for eight classes, Thursdays 7:30-8:30pm at Tamar Park. Email hulahoop@turningcircles-hk.com to sign up.

Health Dance Yoga Wellness Fitness Fitspiration Fitness Classes Turning Circles Hoop Yoga Hula Hoop Hula Hooping Dance Classes
Evelyn Lok
Managing Editor
When not trying out the latest beauty and wellness trends, Evelyn is likely enjoying a perfectly balanced negroni or exploring some of Hong Kong's best new places to eat and drink. At Lifestyle Asia she covers everything from the biggest events in town to interviews with Hong Kong specialists, with topics spanning art, food and drink, health, tech, and travel.
Beauty Wellness Events Art Drinks
Sign up for our newsletters to have the latest stories delivered straight to your inbox every week.