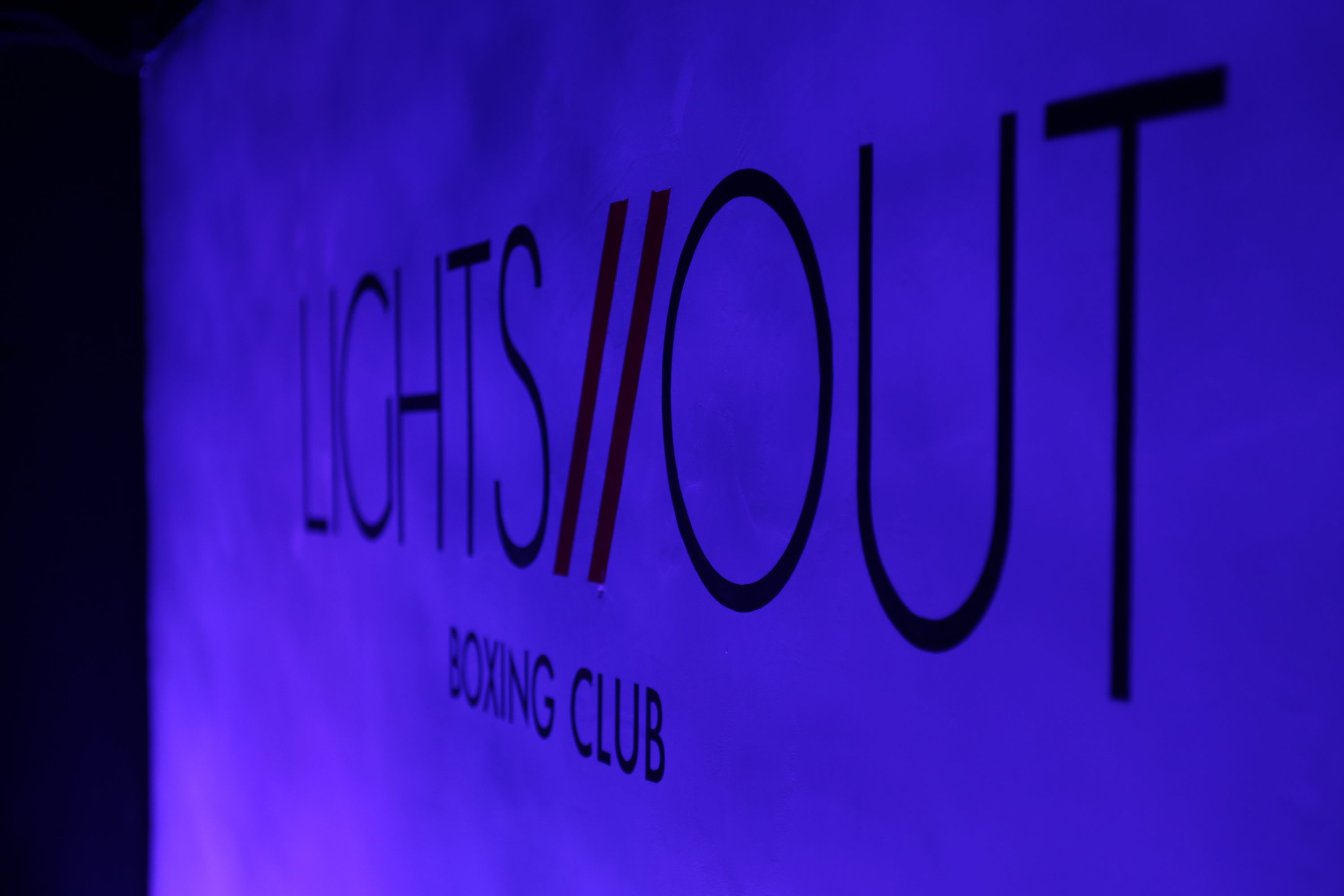 Chances are, you’ve already seen Lights Out Boxing Club on your social media feed: Hong Kong’s newest, hottest workout destination packs punches (literally) with its signature dark, clubby vibe and highly Instagrammable studio space. “Oh! So it’s like the XYZ of boxing,” most people have remarked when I mentioned Lights Out to them. Well, yes and no. There’s no formal affiliation between the two, but Lights Out and spinning club XYZ both belong to the religion of party-atmosphere fitness concepts, and one of Light Out’s master trainers is Sandy Sydney, a former program manager at XYZ, while trainer and model Angie Ng (pictured below) also teaches classes at both venues. 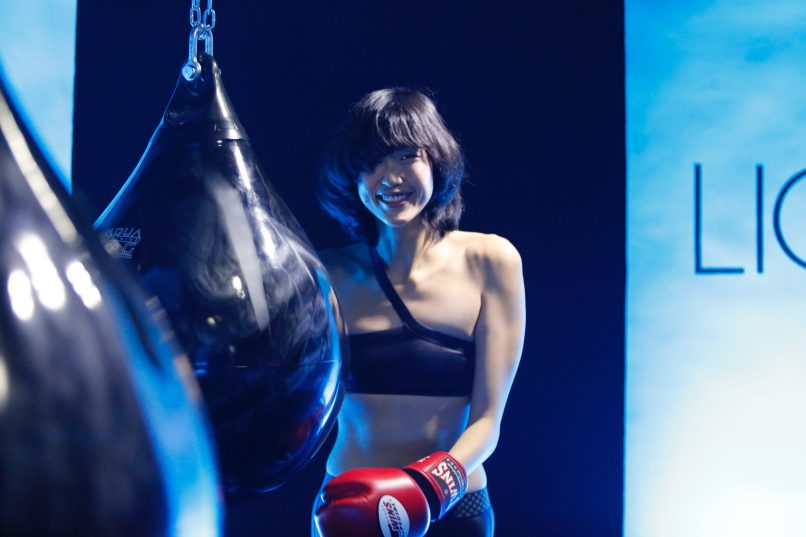 Part of the ever-popular “cardio party” gym experiences in town, these sessions are loved for purportedly that almost-transcendental meditative state, found when you’re surrounded by nothing but the depths of darkness and thumping beats (the tag line at Lights Out is “Find Yourself”). The surging popularity and cult status of this exercise genre has its lovers and haters, but unabashedly, I am all for it.

The founder and face behind the brand is Warrior Hong Kong Boxing and Muay Thai gym owner Billy Tam. Lights Out Boxing Club is essentially an annex located inside the seemingly sprawling Warrior Hong Kong space within a Fortress Hill industrial building, and they share the same spacious changing and shower facilities. 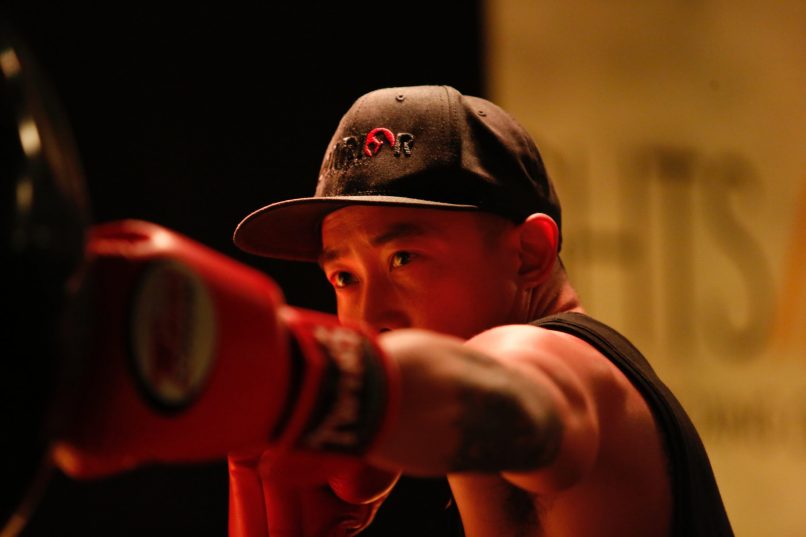 Slightly dripping from a downpour one evening after work, the Lifestyle Asia team caught the 6:30pm full body trial class with Lauren White, a former trainer at HIT45, with expertise in high intensity interval training. With her instantly recognisable, booming voice, you can count on the class to swerve into bubbly, high-energy territory — even though the torrential rain that day meant the class was downsized from potentially a full house of over a dozen people to just the three of us.

With upper body, lower body and full body sessions available at Lights Out, each 45-minute class here is split between floor workouts with assorted equipment, and boxing workouts on the Aqua Bags on the other side of the room. Seasoned boxers and non-boxers alike will still feel an adequate amount of challenge in every workout. 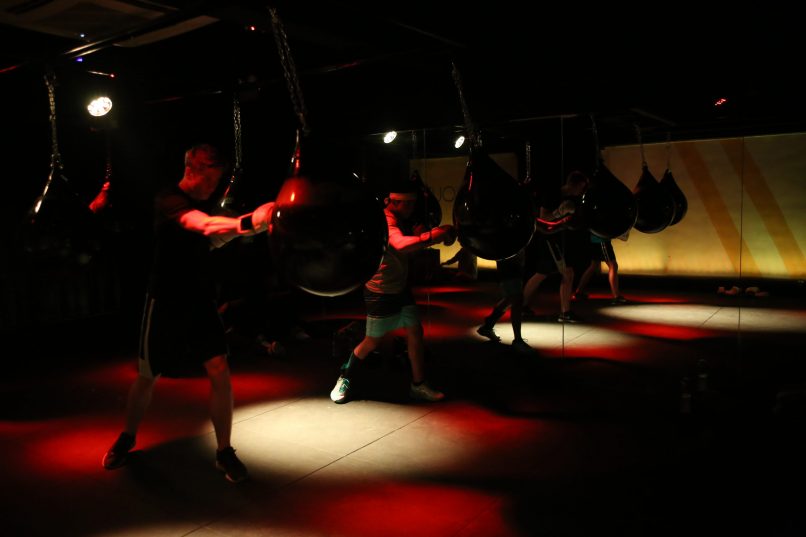 As someone relatively new to boxing, I was keen to see how I would fare with the Aqua Bags: heavy, water-filled rubber bags hanging from steel chains. Kicking off with some upbeat EDM, the lights were dimmed and our instructor began schooling us on the six types of punches we’d be doing: jabs, crosses, front and back hooks, and front and back uppercuts, each assigned to numbers one through six. Our job was the follow the number combinations projected onto the wall in front, and punch the corresponding moves.

My hands, not used to wearing wraps and boxing gloves, quickly began to feel irritated by being enclosed in the large, pillowy gloves. However, I was told that a typical Lights Out class would work best with specially designed, fingerless padded gloves. Working slowly at first to get the hang of the movements, we quickly moved into light combinations which began to get my heart racing a little faster. The challenge here was in coordination, remembering and executing the moves along with the beat of the music, which was disorienting at times. The bags themselves were not as static as your average drill bags, and they swung rather easily, so Lauren had to keep on coming over to stabilise them for me. With much stronger feedback from the rubber surface, it made it tougher to actually punch, but the sensation of connecting with something soft and fluid within (i.e. water) made it a lot more satisfying than simply tapping a solid column of sand and air. 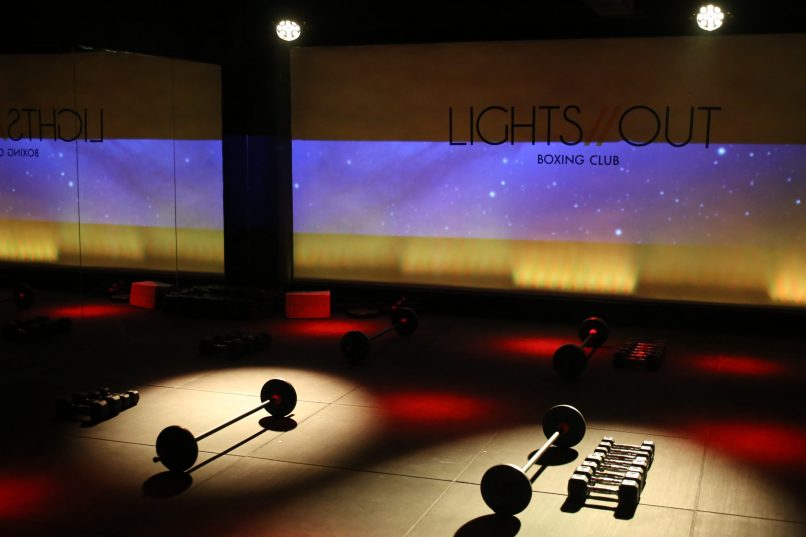 We went through eight rounds of work, alternating between bag work and floor work, in rising intensity. Thankfully, each round wass just a couple minutes long, so it actually didn’t feel too tedious. Slipping into the darkness with only a few rays of spotlight and coloured lights around us, it was very easier to focus on your own ability, form and body capability, even more so on the floor. Those familiar with HIIT classes, such as HIT45, might feel a sense of recognition for the floor rounds, with circuits of four or so movements such as weighted sit ups, bench hops, bent-over rows, weighted squats, burpees and crunches. Borrowing a little from the world of CrossFit, we also did countdowns: 10 reps of several exercises, then 9 reps of each, then 8 reps and so on, down to one.

By alternating rounds, the floor work challenged our strength and power, while the bags rested the body ever so slightly while we worked on our speed and cardio. In a subsequent boxing round, the combinations got faster, then squats got incorporated between punches for a true full-body workout — my glutes, back and shoulders were on fire at about halfway through. 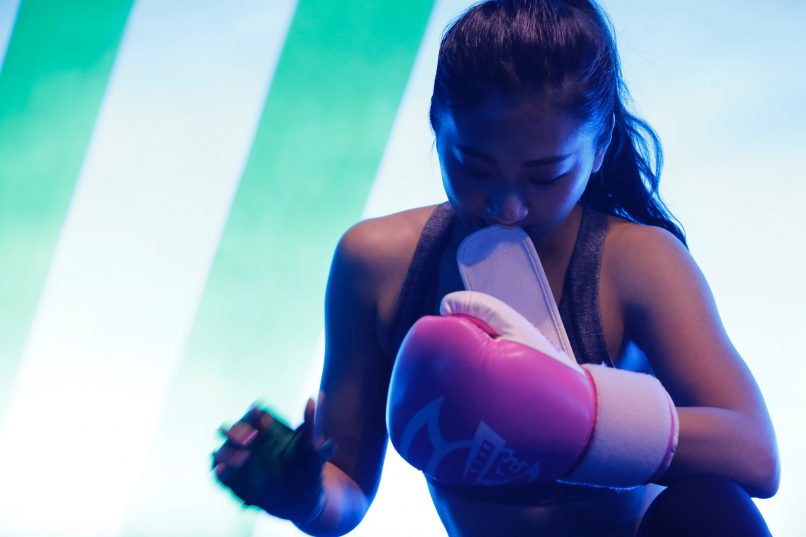 It’s safe to say that under Lauren’s coaching, our bodies were worked out fully from shoulders to toes, all the while powering through with her infectious, assertive instruction. Typically, my favourite part of the whole black-lit gym experience is when the intensity is at its peak: the lights, music and your body work to an almost epiphanic crescendo, allowing you to let go of the tensions of the day right before the tempo falls. At Lights Out, I got my speed-focused portion of free-punching time, but I learned that the intensity of dizzying strobe lights doesn’t quite mesh well with the act of hitting a target. Better on a stationary bike, or pummelling through a set of bicep curls or even burpees, perhaps. Or maybe I’m too particular with whom or what I’m punching — some people might not mind this at all.

If you’re someone who’s more excited by sparring, practising fast footwork or learning how best to knock out an opponent, you might want to head outside to the clean and brightly lit surrounds of Warrior Hong Kong (I also love that it doesn’t smell of a typical boxing gym, aka the pungent aroma of ammonia-soaked fists). But if you’ve been feeling tired about your staid, stale-smelling, local boxing gym; or if you’ve had a hard day, you just want to sweat hard and overload your senses to forget it all — plus if you have an affinity to head-to-toe post-workout soreness — you’ll want to check out Hong Kong’s latest hit workout at Lights Out.

Classes at Lights Out Boxing Club start from HK$275 for a drop-in session; Packages start at HK$1,350 for five classes.

9 ways you can add CBD to your daily routine

Cleanfreak.Store launches pop-up at the Landmark