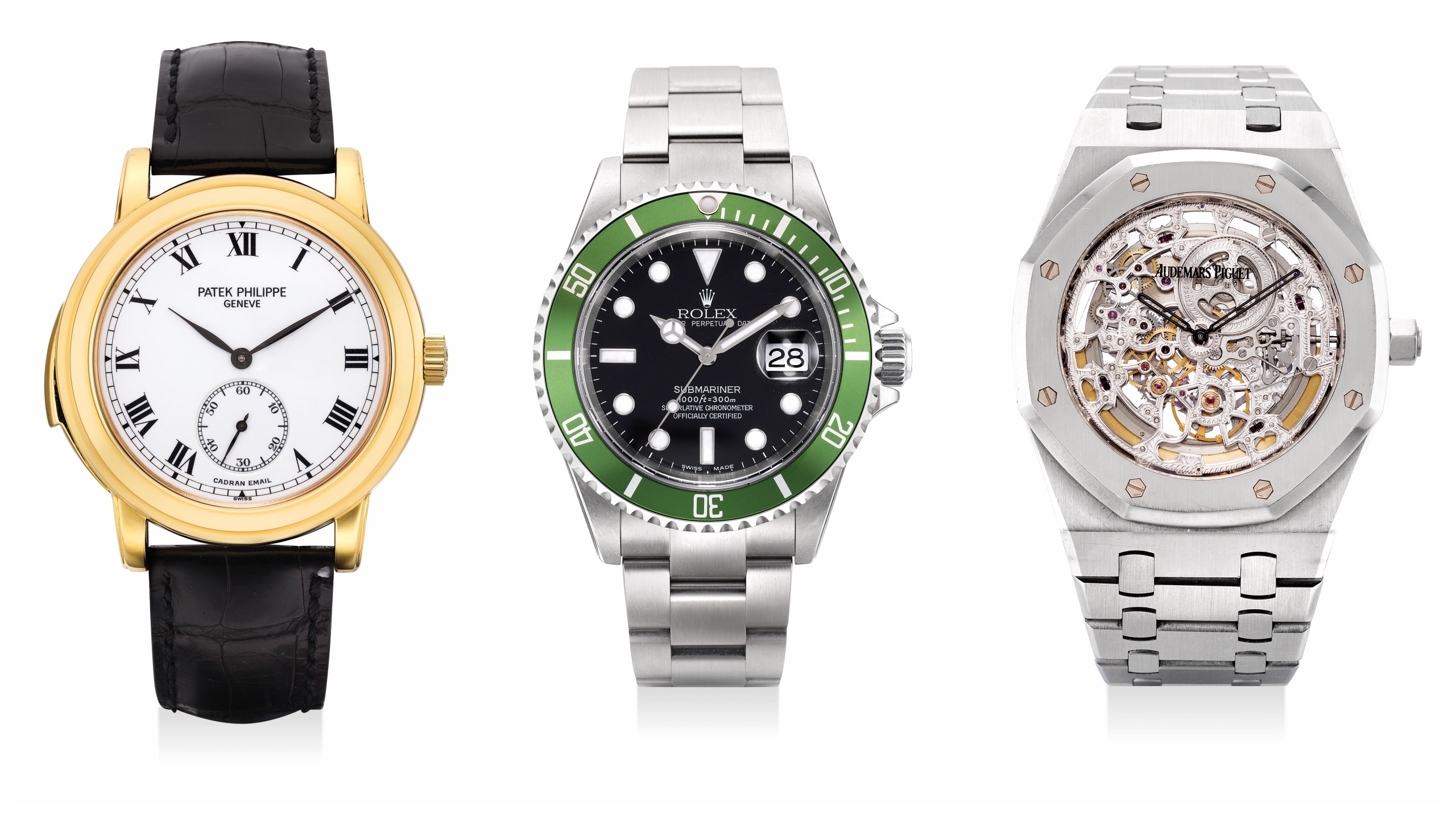 An insider’s guide to the most collectible watches at The Hong Kong Watch Auction: SEVEN

Style
An insider’s guide to the most collectible watches at The Hong Kong Watch Auction: SEVEN
Share this article
Next article

For watch collecting Hongkongers, the coming of autumn is synonymous with spirited shouting atop the rostrum and innumerable banging gavels. That’s right folks, the 2018 fall auctions are nearly upon us. To capitalise on the performance of the major consignment houses in Geneva earlier last week, industry leader Phillips is once again holding its highly anticipated round of Hong Kong sales. Located at The Mandarin Oriental, Hong Kong Watch Auction: SEVEN will take place on 27 November; comprising 259 lots that range from fine contemporary timepieces to one-of-a-kind antiques. “Following the success of our May sale in Hong Kong” says Thomas Perazzi (Head of Watches, Asia), “Phillips is delighted to present the seventh instalment of Hong Kong Watch Auction this November”. The upcoming event builds upon strong groundwork laid by the previous Hong Kong Watch Auction: SIX— a sale that attracted collectors from over 47 countries whilst realising a total value of over HK$124 million. Ahead of what promises to dwarf even the results of last May, we caught up with Perazzi — Phillips’ Asian watch capo since 2017 — to get the scoop on 10 of his personal picks from Hong Kong Watch Auction: SEVEN.

Part of the “Big Red” lineage (denoted by the inclusion of the “Daytona” signature in large red font) which has achieved cult-like status throughout the global watch collecting community, this Ref. 6265 Daytona features a caseback that is stamped “6263”. The present exemplar is part of a limited supply and, adding to its desirability, is in excellent condition: all of the dial’s original lume plots are intact; and the sharply faceted lugs exhibit only negligible signs of wear. Accompanied by its original box and tags, this lot presents collectors with a unique opportunity: the acquisition of a period-correct, mint condition, “full set” Daytona.

Among the most notorious “fun” Rolexes around, the Rainbow Daytona is actually part of a design heritage that stretches back to the early 2000s. Decorated with a bezel which features gemstones of various colour gradation, the watch is transformed from an already-impressive chronograph into a veritable rainbow on the wrist. The product of Rolex’s careful selection of hues, the watch’s visible opulence is further enhanced by the addition of diamond-set crown guards. Love it or hate it, there’s no denying that the Rainbow Daytona is amongst some of the most demanding watchmaking that Rolex is doing today; and the current exemplar — a complete set in almost-new condition — presents collectors with a rare opportunity to own a piece of the manufacture‘s more unusual history.

The general public may have been exposed (at length) to the world’s most expensive wristwatch sold at auction, but rest assured — collectors remain rabid for the coveted “Paul Newman” Daytonas. Part of a 3,000-unit run produced sometime between 1966 and 1969; the current reference is part of an even smaller handful of Daytonas which possess the black & white livery associated with Paul Newman. In excellent condition and displaying trace degrees of patina (most noticeably around the lume plots), this particular Paul Newman Daytona is being sold with original papers, indicating that it was first offered by a Spanish retailer in 1973.

Part of Gerald Genta’s family of iconic luxury sport watches, this Ref. 15136ST bears the unusual distinction of having a skeletonised dial. According to Phillips’ specialists, the present lot was produced in extremely limited quantities and is one of only several Royal Oaks featuring skeletonisation known to have surfaced on the market. The open-worked dial evidences various finishing techniques (e.g. engraving and polishing) and enables wearers a high degree of visibility when it comes to the movement below. (Elements of the gear train inside this Royal Oak’s calibre 2120 can in fact be glimpsed from the dial.)

Featuring a sweep seconds hand and idiosyncratic power reserve indicator, this particular Nautilus was produced in 1999. As its reference number suggests, the current model is a variation on the Ref. 3700 “Jumbo”; and unlike the latter watch exhibits a number of exotic characteristics (e.g. Roman numeral indices and the aforementioned power reserve) which reveal it as one of the first complicated Nautiluses produced by Patek Philippe. Offered in excellent condition and with impeccable credentials — the certificate of origin is also accompanied by an extract from the Patek Philippe archives — this lot exhibits only minor blemishes, and is bound to please even the most discerning collectors.

Aside from how it embodies the consummate design philosophy that now underlies all Patek Philippe wristwatches, this Ref. 2526 is exceptional for another reason — it houses the manufacture’s first automatic movement, the calibre 12-600. Developed in secret so as to avoid Rolex’s then-recognised patent on rotor technology, the calibre 12-600 is a pillar of Patek’s fine horological legacy — a 30-jewel movement which required over 20 years of R&D. Historicity aside, this is quite possibly one of the best looking time-only lots being offered later this month. From the dauphine hands to the bright lustre of its eggshell tone dial, this Ref. 2526 is proof positive that Patek reigns supreme when it comes to watches marked by clean, fine, universally tasteful design.

A unique piece distinguished by its intricately detailed cloisonné enamel panels (portraying a wave-like pattern of horses), this “Chevaux de feu” dome clock (produced in 1986) recalls Patek Philippe’s history of research in photoelectric timekeeping and its ongoing dedication to the traditional decorative arts. The present lot first appeared on the market in 2007 and showcases the enamelling work of Luce Chappaz, one of the most skilled enamel workers at the manufacture for much of the latter 20th century.

Patek Philippe’s Ref. 5079 was initially launched in 2001. Built using a movement that incorporates a minute repeater complication and Cathedral gongs — the latter supposedly yields a deeper more sonorous chime — this reference was unfortunately discontinued in 2006. Phillips specialists estimate only 70 Ref. 5079s are currently in circulation; and from the current lot’s build quality it’s immediately evident why these timepieces are so scarce. An enlarged case of 18k yellow gold and glossy enamel dial belie the watch’s high complication below, presenting collectors with an acquisition that’s elegant and sophisticated in equal measure.

Humorously dubbed the “Kermit” by diehard submariner lovers, the Ref. 16610LV was originally introduced to commemorate the 50th anniversary of Rolex’s iconic divewatch silhouette. This lot’s serial number denotes it was part of the earliest run of commemorative Submariners, released right on the cusp of the 50th anniversary. In production until 2010, Kermit submariners have become increasingly desirable amongst Rolex cognoscenti. The present example features a “flat 4” on the bezel (endemic of very early Kermit submariners); and moreover, is in pristine “New Old Stock” condition.

Ask any diehard watch collector about their top 10 grail watches; and it’s more than a little likely you’ll hear those familiar words “reference 1518” uttered. Released amid the chaos of WWII, the Ref. 1518 is the watch that solidified Patek Philippe’s reputation as a manufacturer of super-complicated wristwatches. The present example dates back to 1944 — one of only 281 models manufactured between 1941 and 1945 in sequence. Possessed of enough horological firepower to shatter the glass on your loupe, this wristwatch also doubles as an astounding historical artefact. The manufacture has performed some light restorative work — notably on the moisture damaged dial — and the result is a watch that is laden with the authenticity that only history can confer. The dial is beautifully oxidised, while the 18k yellow gold case (while polished) retains its hard scratches and marks of provenance.

The Hong Watch Auction: SEVEN will take place on 27 November 2018 at 12 noon (HKT) at The Mandarin Oriental, 5 Connaught Road. To register for advance and online bidding, visit Phillips online.

Wrist Watch: 5 of our favourite timepieces spotted in the wild this October