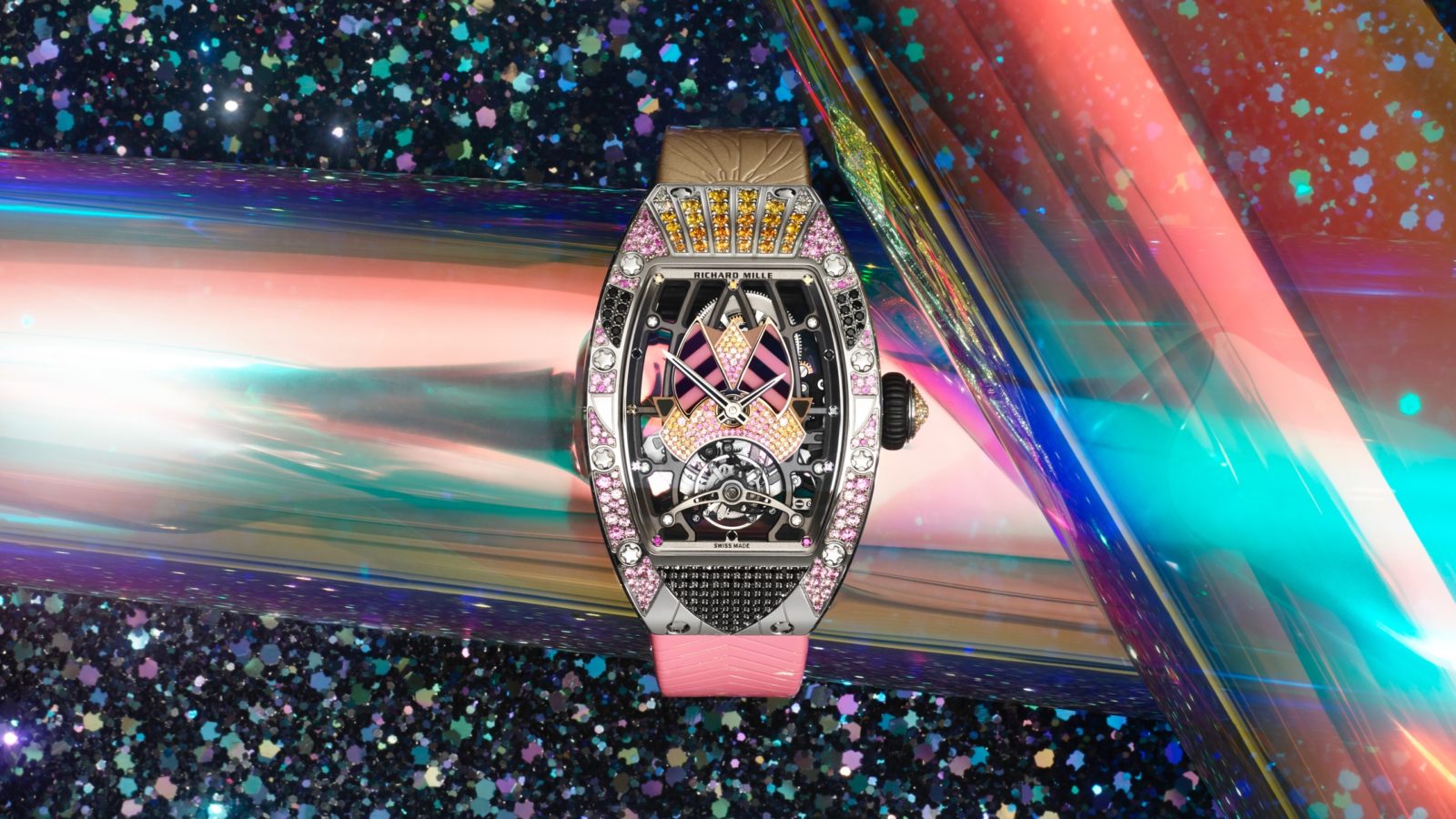 2020 was a year of no fun, no parties and no bacchanalian evenings with juicy stories turned into well-earned badges of honour. It’s no wonder Cécile Guenat, Director of Creation and Development at Richard Mille, turned to the 1970s for wistful inspiration when designing for the RM 71-02 Automatic Tourbillon Talisman watch; after all, it was a decade of louche, sequinned-strewn, unapologetic fun.

The RM 71-02 — Guenat’s sophomore release in her current role — is an update on her first: the RM 71-01. Only this time, instead of the black-and-white austerity of mother-of-pearl, onyx, diamonds and black sapphires, the RM 71-02 watch arrives dressed to impress for a night out disco-dancing: in live, prismatic colour.

This limited-edition suite of 10 RM 71-02 Talisman watches features the most comprehensive selection of coloured gems out of any Richard Mille collection to date; the appearance of hematite, sugilite, amethyst and chrysoprase, in particular, signifies another first for the watchmaking brand as the inaugural introduction of symbolic mineral stones.

“I always wanted to work with colour, and the Talisman collection template presented an exciting challenge, to transform its black-and-white vocabulary into something totally different,” said Guenat. “We abided by the existing patterns [of the RM 71-01], however, we spent a lot of time working on the placement of the coloured stones, playing with the lines and shading, working from the Talisman, or heartstone, on the dial, through to the rear of the case.”

‘A lot of time,’ as inferred by Guenat, actually meant more than a whopping six months. “It’s not enough to finalise the design on paper and then hand it over to the gem setters, as skilled as they may be,” said Guenat. “Even for stones that are exactly the same shade, the final appearance will be completely different depending on the size and setting. A sapphire that you think is the perfect shade of blue can appear too dark after it has been set.”

Studio 54 — a New York City institution in its hey-day and one often mentioned as the blueprint for modern-day night-life, parties and celebrity culture — and its host of legendary patrons served as an anchoring source of inspiration for Guenat, too. This was where Andy Warhol rubbed shoulders with Calvin Klein. Cher, in fishnets and leather. Bianca Jagger, head-to-head with Liza Minelli. Diana Ross, tearing up the dance-floor.

Colourful characters, as a result, inspired the anthropomorphised names of all ten watches in this collection, ideated as a group of girlfriends on a see-and-be-seen night of Dionysian hedonism. Meet Bianca, Donna, Grace, Diana, Jessica, Gloria, Liz, Jane, Carmen and Paloma; all dripping in carefully-lain gems. From 817 to 971 stones per model, to be exact; in carats that range from 3.88 to 5.79, depending on the style.

The gem-set cases of the watches, however, are not the only aspect of this collection’s design with an eye on excess and extravagance. Set in two-toned colourways embossed with botanical and graphic motifs, the complementing bracelets are crafted in glistening metallic patent leather; another first for the company. Altogether, a full-on study in shimmer and sparkle in all of its depth, dimensions and textures.

This RM 71-02 Automatic Tourbillon Talisman collection — much like entrance into Studio 54 on a raucous Friday night in 1978 — is elusive; only seven of each ten variations are available in the world.

Richard Mille RM 71-02
You might also like ...
Style
New Watch Alert: The Richard Mille RM 72-01 ‘Lifestyle’ chronograph
Gear
Say hello to the all-female lineup of the new Richard Mille Racing Team
Joey Wong
Editor
Constantly in pursuit of a multi-hyphenated career, Joey has written her way through fashion trends, youth culture and luxury retail in New York and Hong Kong. Beyond internet adventures tracking down the perfect vintage find, you can probably catch her sipping on her third oat milk latte of the day in the city’s newest café. She’s currently mourning the loss of TikTok in Hong Kong.
Style Culture Drinks Hong Kong Art