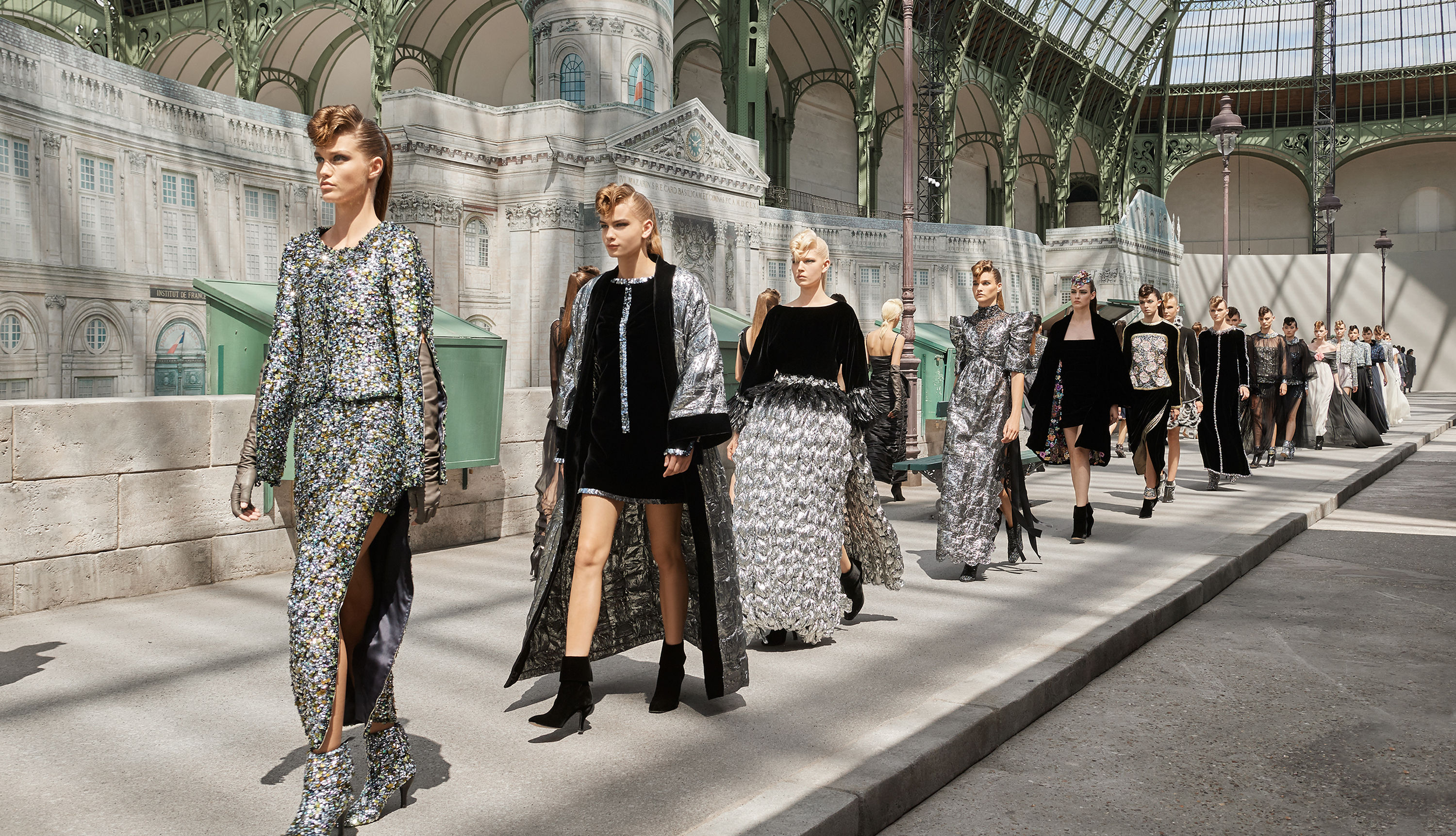 Originally a requirement for power-dressing in 19th-century Parisian society, haute couture today remains a lavish — and important — affair. Constructed by hand from start to finish, couture garments can require up to 20 artisans simultaneously working, over more than 700 hours, to create. In the modern-day era of mass-produced, ready-to-wear clothing, haute couture is the ultimate embodiment of exquisite techniques and craftsmanship from a different era. Celebrate the luxurious world of couture by checking out our 10 favourite collections from the Fall 2018 shows. Christian Dior‘s Fall 2018 couture show once again took place at the Musée Rodin in Paris, where guests were welcomed into an all-white show space that was installed, from floor to ceiling, with toiles of the collection on dress forms as a tribute to the atelier. The collection represents Maria Grazia Chiuri’s celebration of the creative process of haute couture, which, in her opinion, is very much like avant-garde art: Follow the strict rules of tradition while seeking to eventually overturn them and create a new order. Giambattista Valli turned the spotlight to youth this season, with inspiration sparked by very young customers who, in his eyes, “give a new attitude to haute couture”. As a result, the designer has lightened up the collection with cheeky, playful silhouettes including bandeau tops, mini dresses as well as flouncy gowns featuring a much shorter hem at the front than the back, topped with delightfully coloured embellishments such as feathers and bows — elements that were taken from a Francis Picabia painting and the wedding dress Stephanie Seymour wore in Guns N’ Roses’ “November Rain” video in the early 1990s. 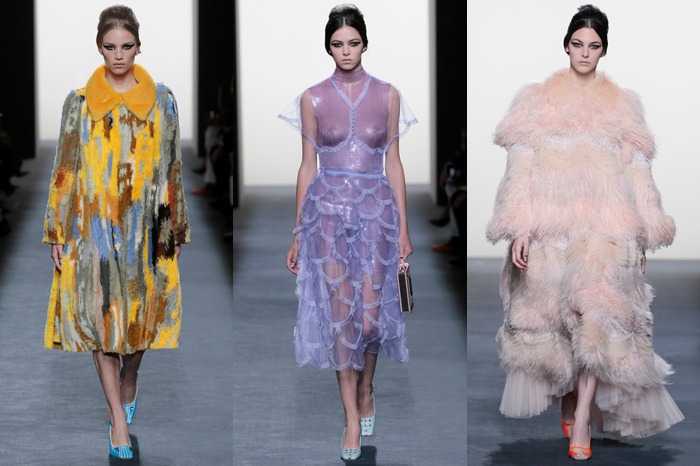 Dancing between sublime tradition and new realities, Fendi‘s Fall 2018 haute couture collection gives off an opulent, regal allure, with creations that bring together Neoclassical aesthetics and innovative techniques to create a diaphanous collection. Highlighted examples include a dress (shown above) that comes with a bodice featuring cages of latticework, and another one in a soft rainbow palette of apricot, lavender and sherbet pink.

One thing that’s exciting to note is that although Fendi has yet to make any promises regarding zero use of fur (as oppose to Gucci, Michael Kors and Versace), the house did make an extra effort to create some pieces in non-fur materials to resemble real fur. The multicoloured coat (shown above left), for instance, was actually made from chiffon that had been frayed and stitched together to result in the trompe l’oeil of mink.

If you were expecting the usual classy, simple elegance at Valentino, you’d surely be surprised by the array of whimsical, extravagant creations that went down the house’s haute couture runway this season. Why the change? Creative director Pierpaolo Piccioli explained: “Couture involves a deeper and more intimate perspective, to go further into your own vision of beauty”. With that in mind, Piccioli dug deep and beyond our cultural histories — from Greek mythology, armours from the medieval era, paintings from the 17th and 18th centuries, films by Pier Paolo Pasolini, Ziggy Stardust, and more — and dreamt up a collection where the past and present collide in fabulous ways. At Givenchy, artistic director Clare Waight Keller dedicated the collection to Hubert de Givenchy, who passed away earlier this year in February. Having joined the house last year as the house’s very first female designer (her predecessors include John Galliano, Alexander McQueen, Julien Macdonald, and Ricardo Tisci), Keller is also, interestingly, the only creative director at Givenchy who met the legend himself. Therefore, for this season’s haute couture collection, Keller wished not only to honour the timelessness of his creations, but also the man who exuded so much elegance and grace throughout his life. The result? A series of 42 creations featuring sleek, graphic and slightly futuristic shapes that echo the works of Monsieur de Givenchy in the sixties and seventies, contrasted with shiny, mineral-like colours and embroideries for a touch of poise, modernity and mystery. “Haute Couture is Paris,” stated Karl Lagerfeld, so for the haute couture Fall 2018 collection, the designer transformed Chanel‘s show space at the Grand Palais into the Seine quayside opposite the 17th-century Institut de France, lined with the world-famous book sellers’ “boxes”.

Reminiscing over the beautiful city that he has known since the 1950s, the designer took inspiration from Paris in fall, and painted his collections in colour palettes drawn from the pale grey of zinc rooftops, the anthracite of street asphalt, the almond green of the roofs of historic buildings, as well as the shimmering gold and silver that evoke the reflections of the moon on the Seine by night.

Silhouettes remained slender throughout the collection, which included an array of tweeted suits as well as zippers on long and knee-length skirts that can be zipped up to reveal an embroidered mini-skirt. This year’s bride (wearing the final look of Chanel’s haute couture collection), meanwhile, was Adut Akech, who stepped out in a long, straight dress and redingote-effect jacket, officially becoming the second black model to walk as the house’s couture bride. After three seasons of presentations at its headquarters at Place Vendôme, Schiaparelli‘s Bertrand Guyon took this year’s couture show to the grand Opéra Garnier, where he presented a collection filled with bold colours and embellishments that expressed Elsa Schiaparelli’s character, personal style, and her love of animals and nature.

Guyon filled his moodboard with Elsa Schiaparelli’s portraits, and noticed how her wardrobe choices at the atelier tended to be simple and minimal, as opposed to the confident and adventurous outfits she was spotted in when out and about. Guyon’s resulting collection features both bold and standout pieces as well as more subtle options that are topped up with fantastical headpieces provided by the milliner Stephen Jones. 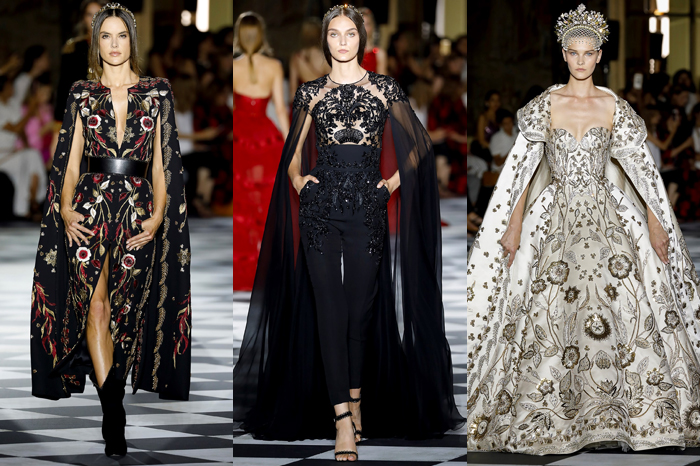 Through his haute couture Fall 2018 collection, Zuhair Murad portrayed a dream-like depiction of imperial Russia, sweeping us off our feet with creations filled with aristocratic opulence. Taking inspiration from the decadent wardrobe of Elisabeth of Russia (famous for her 15,000 gowns) and Leo Tolstoy’s Anna Karenina, Murad dreamed up the fantasy of a woman spending a night at a grand ball in Saint Petersburg, and presented a collection crafted from rich fabrics including velvet, duchesse satin and chiffon, each heavily embellished with intricate detailing that shimmered on the runway. Military-inspired elements — such as royal eagle motifs, badges and corded detailing — can also be spotted within the collection, adding a masculine touch. “Smoking or no smoking?” were the words that was projected across the backdrop at Jean Paul Gaultier‘s haute couture Fall 2018 show. The question also works as the designer’s invitation for all us to challenge the rules, much like how Yves Saint Laurent rejected the presumed masculinity of a suit by coming up with the iconic Le Smoking — a tuxedo suit for women.

Advocating for freedom of expression, Gaultier continued to play with the word “smoking” and came up with a collection filled with dark silhouettes and other elements resembling long plumes of smoke. He also dressed both men and women for the runway, and towards the end of the show, he sent out a topless male and female model wearing a clear plastic shields that read “Tetons Libres” and “Free the Nipple”, reaffirming his questioning of gender rules. Presented at Paris’s Italian embassy instead of its usual location at the Palais de Chaillot, Armani presented a collection of sculptural, almost regal style, featuring spectacular pieces and gowns crafted from sumptuous fabrics in alternating patterns of black and champagne. The idea was to show the young generation the true meaning of haute couture through going back to the catwalk as it once was: the authentic essence of luxury and perfection.