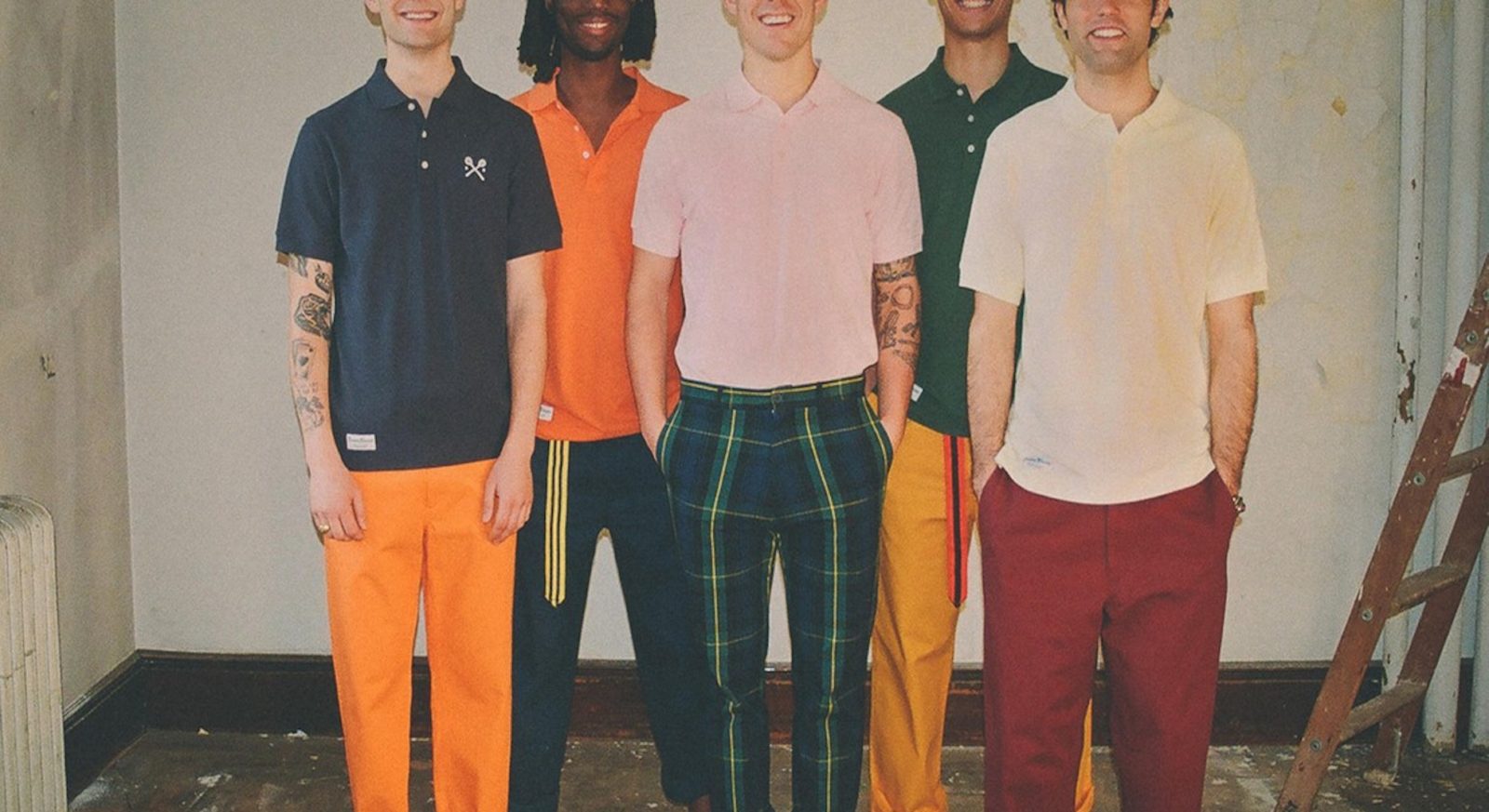 These killer collars will convince you that there’s more to the humble polo shirt than Ralph Lauren led to believe.

A thousand years from now, if martian anthropologists conduct a thorough analysis of all news and entertainment spawned in the latter part of the twentieth century, the consensus will be we really really loathed polos. Among fictional doofuses like Cal Weaver and frighteningly large swathes of the American alt-right, the polo’s popularity has transformed it into a sort of lightning rod for controversy: At best, something fusty and unflattering; at worst, a reminder of historically oppressive power structures.

All of those critiques are of course valid, and yet — despite the best efforts of MAGA stans, frat bros and some schmuck named Ken — the design remains an unwaveringly useful and reliable way to inject a dose of style into most men’s wardrobes.

Think about it: In a post-pandemic world, an avowedly smaller number of men will be dressing up in coats and ties. Indeed, even prior to the arrival of CoViD-19, many mainstream institutions were already surrendering to the call of a week-long ‘casual Friday’. In this brave new world, the tiny hint of structure that the polo does possess (i.e. a shirt-style collar) is a godsend. When correctly executed, they’re just as flattering under the nape of a sportcoat or over trunks and a well-worn set of espadrilles.

That is to say nothing even of the polo’s far-ranging stylistic variation: whether you’re pulling your best Wes Anderson cosplay or channeling the carefree, continental energy of Call Me by Your Name, there’s a good-looking polo shirt to suit every aesthetic and every lifestyle in 2020. Here are half a dozen of our favourites. 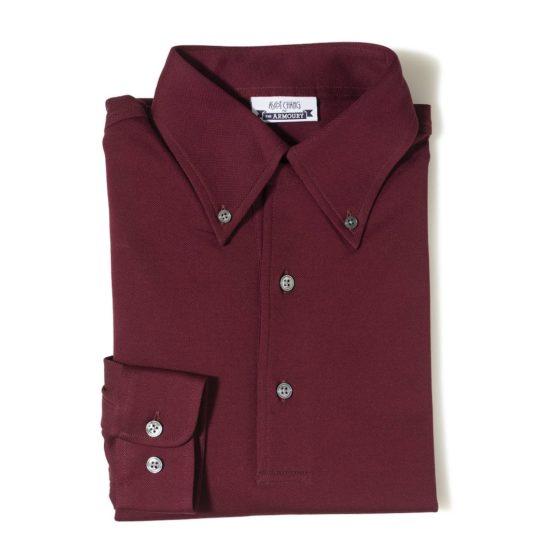 Considered to be an institution amongst Hong Kong’s legion of snappy dressers, The Armoury x Ascot Chang polo is a handsome and unfussy addition to all but the most fashion-forward of wardrobes. It’s made with Ascot Chang’s signature soft, interlined button-down collar — a detail which makes the shirt extremely flattering when worn with a blazer or outerwear. The medium weight material — a 100 percent cotton pique — is highly robust, tending to hold up well against the sort of inclement elements which plague the Hong Kong forecast this time of year. New York-based Rowing Blazers is a brand that vacillates somewhere between authentic, university-inspired prep and full-blown dad-wear — in a good way. For SS20, designer Jack Carlson was inspired by “carefree summer days in New England and northern Italy”, translating to warm weather classics infused with a healthy dose of 80s pizzazz. This polo for instance (unlike the typical Lacoste or Ralph Lauren joint) subverts expectation, with its slightly boxy oversized fit and a sinfully cosy terry toweling fabric. In a pinch, it’s also a handy substitute for a beach towel — so you have ample space to store another bottle of those pre-batched Negronis at your next excursion. 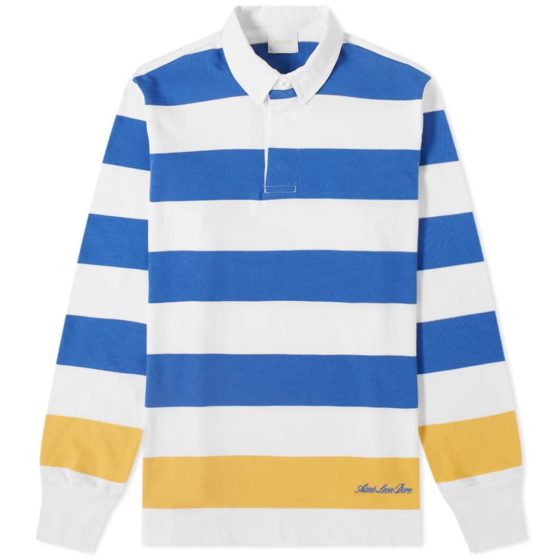 Many menswear nerds will tell you the polo’s ‘Golden Era’ was in the 20-year period following the end of WWII. But Teddy Santis is having none of that. The Aimé Leon Dore founder has found his groove in more recent decades, infusing sportswear like this long-sleeved rugby with the colour and energy of Queens circa 1990. A slouchy cut, complemented by all of the traditional rugby shirt hallmarks, is enlivened by brash block colours of yellow and blue. Throw this on with some knee-length cargoes, your chunkiest hi-top and call it a day. 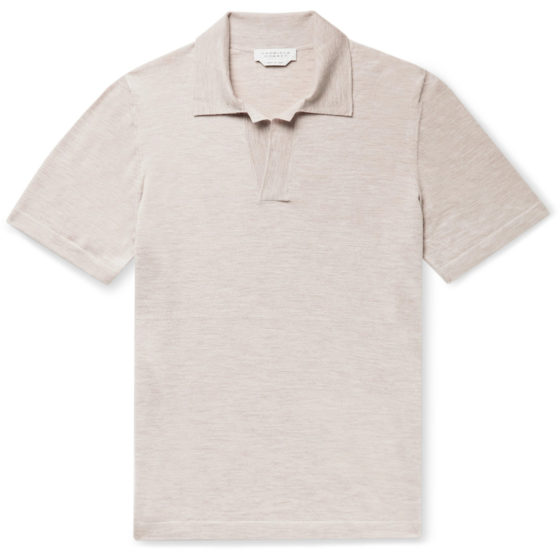 Though Gabriela Hearst is relatively new to the layered, somewhat tribal universe of menswear, all the early signs point to a healthy reception of the Uruguayan designer’s low-key, nonchalant strand of luxury. Garments as simple as the ‘Stendhal’ (Heart’s answer to the polo) are charmingly devoid of superfluity (you won’t even find any buttons on the placket). The resulting emptiness is filled with a tangible sense of softness that is pleasing to the hand and eye, though we reckon that might have something to do with her choice of pure cashmere mélange. Spiritually speaking — if we can use that term — we think this would make for a good double bill alongside some slouchy drawstring trousers. 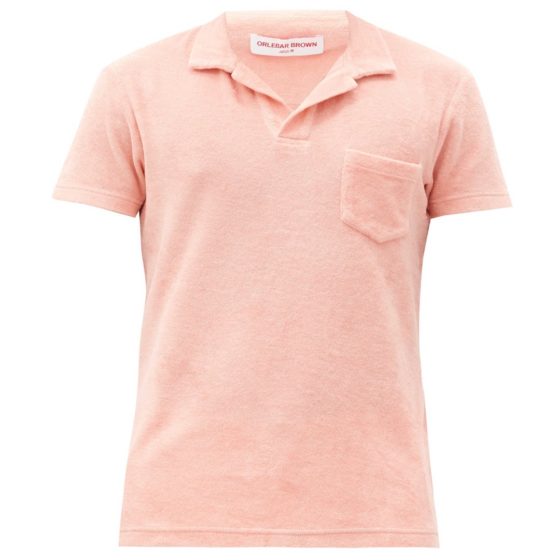 Reportedly modelled after the iconic terry cloth polo worn by Sean Connery in ‘Dr. No’ (1962) Orlebar Brown’s ‘towelling’ shirt has been a cornerstone of the brand for nearly half a decade. Able to take you from surf to turf without a single hiccup, it’s an ideal candidate for those holidays — or more likely staycations these days — when you’re never too far from a large body of the proverbial big blue. The fit features a gentle taper through the torso while the ‘sundown pink’ colourway is a great means of communicating your enthusiasm for Aperol. 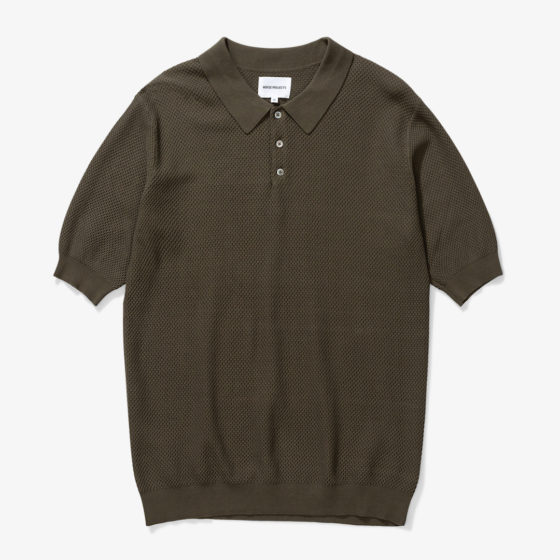 Can’t decide whether you want a sports shirt or a summer knit? Don’t worry, that question was rhetorical — Norse Projects have successfully managed to combine both. Contrary to what its name suggests, the ‘Johan Light Bubble’ is not the latest Danish art object but an extremely lightweight knitted polo. Featuring flat-stitched sleeves, cuffs and collar, it’s a piece that recalls the original laurel polos sported by skins, mods and other countercultures that have emerged in the modern era. The ‘bubble structure’ fabric is also ideal for Hong Kong summers — sporting a jersey-like handle that is the result of knitting with high-twist cotton yarns.

Where to drink in Hong Kong in July 2020