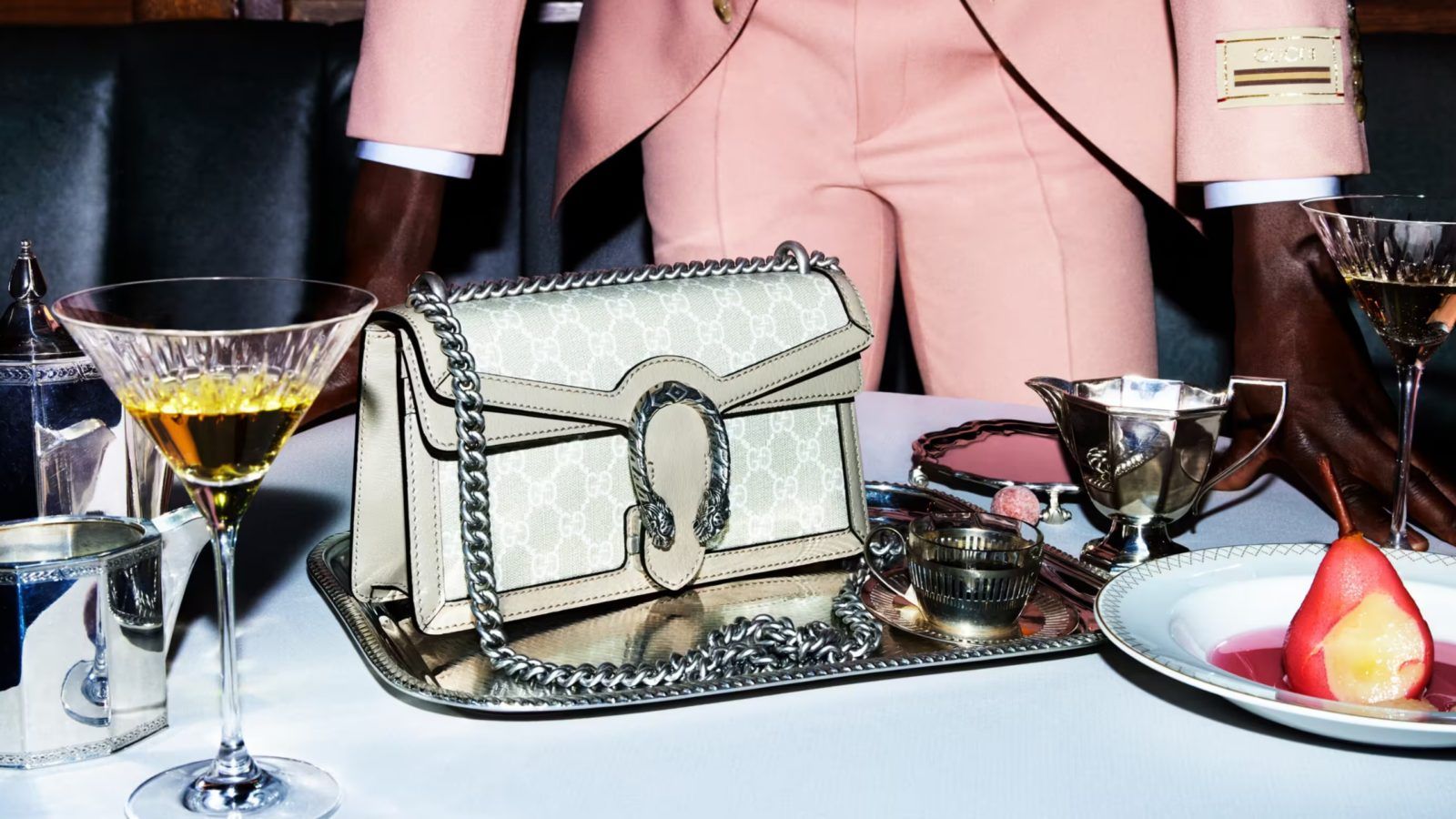 10 classic Gucci bags to buy now — and have forever

A luxury handbag from a brand like Gucci — where history and heritage is steeped into every last stitch — is an investment. Here are ten to consider for your next purchase.

An unmatched legacy, a name that dominates the global fashion industry, with designs that become cult trends, Gucci is more than just a fashion house. It is an emblem of luxury, sophistication and elegance that sets the wearer apart from the crowd.

Crafted with fine leather and canvas, a Gucci bag personifies functional style and class. Whether it is the House’s small shoulder bags, chic bucket bags or timeless beauties like the Gucci Jackie, the signature bags exude confidence and empower anyone who carries them. Many of the iconic Gucci bags have been popularised by personalities like Lady Diana, former US First Lady Jackie Kennedy and stars like Lee Jung-jae of Squid Game fame, Harry Styles, Rebecca Lim, Serena Williams, Dakota Johnson and others.

The House’s Creative Director Alessandro Michele has time and again taken these iconic creations and revolutionised them to suit the changing times, to add more drama for a capsule range and even create a new line of Gucci bags but with the heritage spirit intact. Eliciting refined taste and panache, there is a Gucci bag for every occasion which can be recognised even in a fleeting glance.

Carrying a Gucci bamboo bag is like carrying a piece of history. In the post-war era of 1947, when acquiring raw materials became difficult, founder Guccio Gucci realised that using Japanese bamboo would be a more convenient option. It was easy to grow and import and could be moulded into the desired shape for a handle.

Originally called the 0633, the bag was rechristened to its current name and soon became an unmissable fashion statement in the hands of Lady Di, Grace Kelly, Elizabeth Taylor and others. Heating an unblemished bamboo cane, giving it the right curve and coating with layers of lacquer to achieve the perfect brown shade takes almost 13 hours. Due to such a long process, no two Gucci bamboo bags would look the same.

With time, this item became a Gucci hallmark and, in 2010, the then-Creative Director Frida Giannini pulled it out of the archives and redesigned the look. With a larger frame and detachable leather shoulder strap it became the ‘New Bamboo’ and was instantly liked by Beyoncé, Florence Welch and Naomi Watts.

Alessandro Michele revamped the bag and Gucci Bamboo 1947 was created. With abstract prints, the House’s green and red strap, leather belts and bright colours, the bag was reinvented for the house’s signature line: ‘Beloved.’

An extended version of the bamboo bag, the Gucci Diana small tote bag is one of the most famous Gucci bags of all time. Reinvented and redesigned over the years, this bag has seen a wide spectrum of innovation and craftsmanship from the Italian luxury fashion house.

The Gucci tote bag, released in 1991, became the Princess’s signature accessory as it symbolised her confidence and free spirit. She paired it with elegant dresses and denim as well as her sporty attire.

This bamboo handle bag was renamed Gucci Diana in 2021, which marked her 60th birthday. On this occasion, the vintage Gucci item was given a very modern touch with neon bands around the handle, which became a distinguishing element. The bands keep the handles in shape.

The bag comes in seven colours and three size: mini, small and medium. The neon bands come in yellow, pink and orange with the double G logo on the front. One can also customise and engrave letters on the bands to personalise the piece. Today, celebrities like Rebecca Lim, Sienna Miller, Alexa Chung and others have been known to sport this bag.

It was first spotted when Jackie Kennedy was seen carrying this unisex tote bag in 1961 and it sent the fashion world in a frenzy. Since then the House renamed the bag in her honour.

Over the course of Gucci history, the bag has seen a number of redesigns and reinterpretations under Gucci’s several Creative Directors. First in 1999 by Tom Ford, followed by Frida Giannini, who gave it the name ‘New Jackie’ and most recently the iconic bag got a fresh lease of redesigning under Michele in the Fall/Winter 2020 Ready-to-Wear collection. It is now called the Gucci Jackie 1961.

Michele gave the bag a more modern spin and introduced an array of soft pastel shades along with a long adjustable strap that can make the bag go crossbody. Albeit, the gold buckle closure continues to be the main showpiece, the self coloured bag has seen a number of abstract prints and designs for various collections like the Gucci Aria line being ushered in to suit modern tastes.

Stars like Harry Styles and Miley Cyrus among numerous others have taken the Gucci Jackie 1961 for a spin, and made the retro bag a statement piece depicting modern chic fashion.

Michele truly channelled his experience as Gucci’s former head accessories designer when he launched the Gucci Dionysus bag in the Fall/Winter 2015 Ready-to-Wear runway. Crafted with a fine GG Supreme canvas which had the brand’s double G logo printed on it, the bag introduced a noted hardware component: a horseshoe-shaped aged metal clasp tipped with two tiger heads. It is an ode to the Greek God who, according to legends, rode a chariot drawn by tigers.

The SS22 collection unveiled the bag with the bold Centum logo and as part of the Beloved Line, the bag comes in pastel shades, bright colours and the GG logo printed all over.

Michele also introduced a number of bold and whimsical designs with flower, wasp and other nature motifs making it a timeless creation.

Incorporating elements of Gucci’s equestrian heritage, this bag symbolises the brand’s fashion tradition and is a cult favourite. The Horsebit 1955 features a gold double ring and bar clasp over the flap and is another vintage bag with Michele’s modern creative touch.

As part of the Gucci Beloved line, the creative director envisioned the bag as part of a late night talk show and featured Diane Keaton in the campaign. The classic archival look is given a modern makeover by the hands of Michele who introduced it in black, white and brown leather. The line of mini and small totes, bucket bags and shoulder bags with this gold clasp have gained global attention.

Trust Alessandro Michele to turn this timeless classic into a bold statement. As part of the Gucci Gift campaign, the Horsebit 1955 saw white circles and colourful geometric patterns all over the double G dominance of the canvas.

When it comes to versatility the Gucci Marmont bag is hard to miss. With its range of matelassé leather, quilted leather, crossbody flap bag and the leather bucket, the Marmont bag is an eternal beauty that has caught the attention of several celebrities like singer and songwriter IU, Serena Williams, Awkwafina and others.

The bag first appeared in the Fall/Winter 2016 Ready-to-Wear collection and instantly stood out. Redesigning the GG logo, Michele made the letters face in the same direction and slightly overlap.

Blending ‘70s hardware with new modern silhouettes, the bag also features the Gucci staple chain strap and comes in a myriad of colours that can elevate any outfit elegantly and playfully.

Ideal for the working individual who likes to carry all things with them while on the go, the Ophidia tote is as spacious and roomy as it gets. The supreme canvas shoulder bag is voluminous and bears the web inlay detail all over the body along with the Marmont flap.

Making its debut in the Cruise 2018 catwalk at the Pitti Palace in Florence, the bag has inspired an entire range of Ophidia bags and cases. Needless to say, the brand’s GG logo imparts a sense of ultra luxury to the person carrying it.

Another of Gucci’s most versatile bags, the Padlock bag comes in crisp neutral colours that can go with any outfit and make the wearer stand out from the rest. With an interplay of browns, blacks and tones of beige and gold, the bag features the bold golden padlock system that makes it a Gucci icon.

The Padlock GG Supreme shoulder bag comes with a sliding chain strap and can be worn in the most creative ways imaginable. The leather handle for the mini canvas bag or a combination of both in the padlock shoulder bags can easily enhance any outfit and make one ready for the occasion at any time of the day. For a more feminine touch, the bags also come in white leather with berry prints.

Get a younger and more playful look and make heads turn with the easily recognisable Gucci Soho Disco bag. Designed by former Creative Director Frida Giannini in 2014, the model marked Gucci’s first step into the realm of entry-level bags for those looking to buy their first designer bag. Its small compact structure made the Soho Disco an instant hit among fashion followers.

The camera-style bag features tassel zipper pull, zip lock, two interior slip pockets and the interlocked GG logo at the centre. Made of fine pebbled calfskin leather, the bag may not be the most eye-catching like other Gucci bags, but that is what made it popular.

It originally came in a number of shades but today only the black and rose beige versions are available. Whether carried over the shoulder or worn crossbody, the Soho Disco bag is casual and sporty yet spacious and elegant.

Churning out yet another hit, Alessandro Michele visited the Gucci archives from 1969 to redesign the iconic Gucci Sylvie bag.

Taking the name Sylvie 1969 after its rebirth, the bag continues to garner major celebrity following from the likes of Dakota Johnson, Rita Ora, Deepika Paducone and others. The signature gold toned chain buckle, saddle inspired red-green stripes, clean minimalist engraved logo on the clasp and an overall compact military look renders the bag a confident feminine look with a sophisticated touch.

The Spring/Summer 2020 ushered in the curvy design and adjustable snap button straps. It also comes in a number of colours and prints besides black and brown. These include vibrant blue, red, green, butter along with lizard and crocodile prints.

Shopping Gucci Gucci Bags gucci gg marmont Gucci Beloved
Trinetra Paul
An ardent foodie, Trinetra seeks every opportunity of travelling and writing. Storytelling and slam poetry are her go-to jam. Her lazying around ideas includes binge watching and whipping up some snacks or searching the next place to visit.
Sign up for our newsletters to have the latest stories delivered straight to your inbox every week.