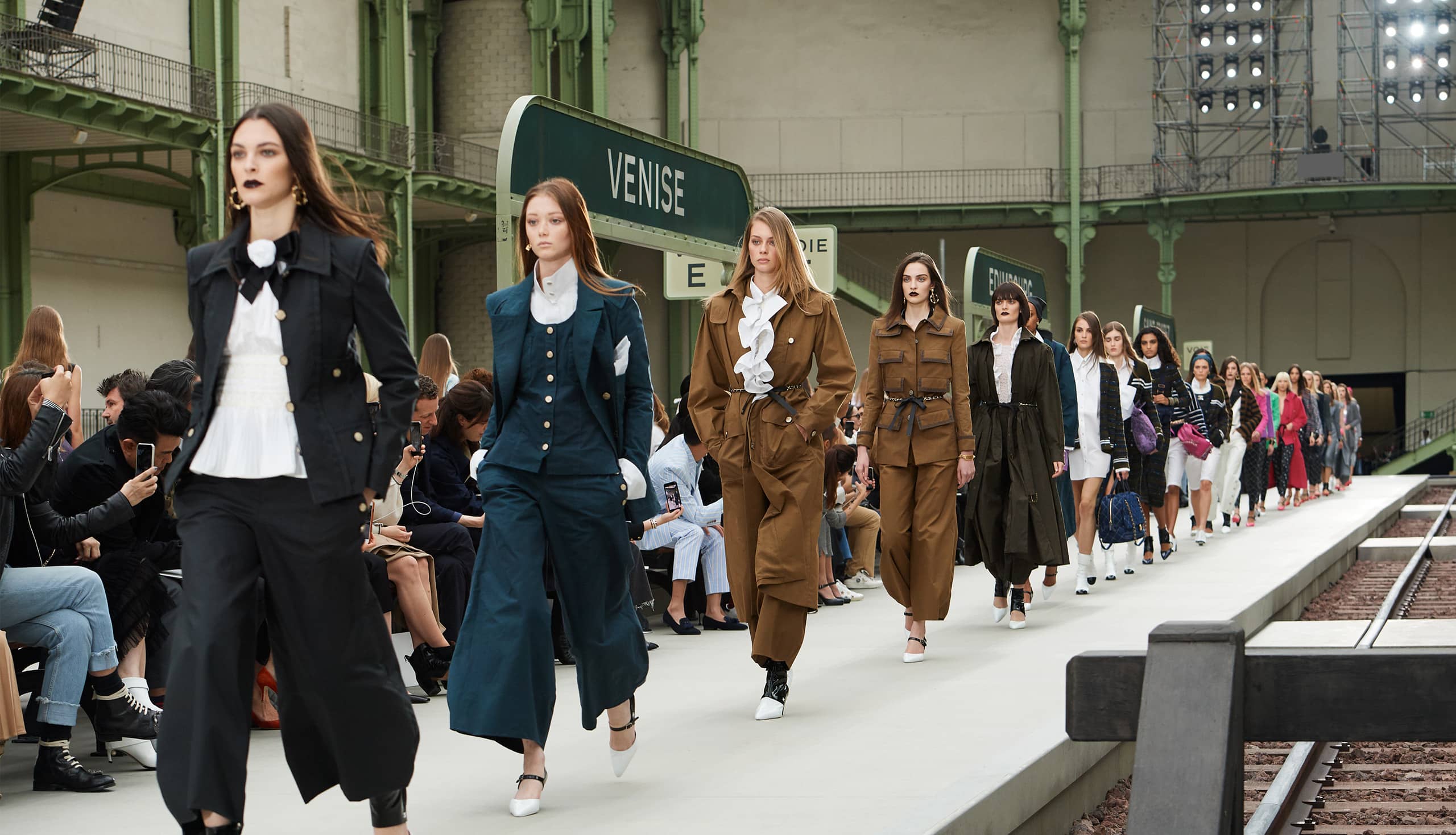 With the passing of Karl Lagerfeld, the House of Chanel now carries the legacy of both him and Gabrielle Chanel, making it an undoubtedly daunting place to be (and also a huge honour, of course) if you’re the house’s new artistic director. That honour belongs to Lagerfeld’s ‘right hand woman’ Virginie Viard, who now faces the imposing task of steering her own path while walking in the shadows of not one, but two design legends who have been shaping the way women aspire to dress for over a century.

For her debut solo show for the Cruise 2020 collection, Viard followed in the footsteps of Lagerfeld in creating another fantastical runway set, transforming the show space at Grand Palais into a Beaux-Arts train station platform complete with train tracks, wooden benches and a Belle Epoque café-restaurant named Le Riviera, where breakfast and lunch were served before shows to VIP guests.

Different names of cities could be found printed across the destination panels. They included Venice, Saint Tropez, Athens, Byzance, Bombay, Edinburgh and Rome, all of which are locations where previous Chanel Cruise shows were held. Symbolically, guests — which included Lily-Rose Depp, Keira Knightley, Liu Wen, William Chan, Jay Chou and more — were invited to witness (and get onboard) Viard’s new vision for Chanel, as she prepares to take the house forward towards a brand new direction, starting with the Cruise 2020 season.

Set alongside the iconic black, ecru and white, the collection featured a delightful palette of pink, green, blue, fuchsia, mauve and sky, topped with clashes of deep bistre, mocha browns, navy and cobalt blues. While a variety of Chanel’s signature styles — such as tweeds, pantsuits and classic handbags — could still be found, the overall aesthetic felt much younger, lighter, simpler and more relaxed. There were florals scattered across the pieces, some printed, some embroidered in sequins and others cut from silk, tulle and rhodoid, adding a touch of elegance throughout the designs.

Comfort and functionality is key when it comes to travel attire, so the designer drew inspiration from workmen’s uniforms, reinterpreting them into a range of easy and breezy jackets and also wide trousers with double buttons made from gabardine or waxed cotton. Other outerwear included hooded trench coats and amply cut coats, styled over cotton blouses with large flounced jabot or bandeau tops with oversized bows, then wrapped together with chain belts for a boost of femininity.

The emblematic tweed jacket, meanwhile, appeared in multiple iterations for added modernity: with two, four or six pockets; with or without a collar; shoulders soft and rounded or square and responsive; and single or double breasted with draped panels. In all pieces, the incarnation of the House’s savoir-faire continued to be applied down to the smallest detail. Alternating with jersey leggings, the mini-skirts and trapeze skirts, the iconic jacket also appeared with lengthened knickerbockers made in tweed, for a new and much more feminine vision of the iconic suit.

Bags, on the other hand, included 11.12 bags in patent quilted leather or tweed, some equipped with a circular handle for a contemporary touch. There were also colourful versions that featured a new 3D quilting pattern, and others attached to maxi duffle bags in denim or leather, for a retro but effortless edge. Minaudières in playful travel bottle and traffic light design were also included in the collection, keeping up with the rest of the travel-themed collection.

Chanel’s Cruise 2020 collection comprised of 76 looks; and though Lagerfeld is known for his extended collections (some included over 90 looks), we think perhaps Viard was a little too hard on herself in trying to keep up with that amount in her first solo show. Rather than seeing a huge collection that included a mix of beautiful pieces and less impressive ones (some were rather questionable, to be honest), we would have preferred to view a smaller range of creations that made our eyes twinkle with excitement, as they usually do at every Chanel show.

Watch the video below for a thorough look at Virginie Viard’s first solo collection for Chanel.