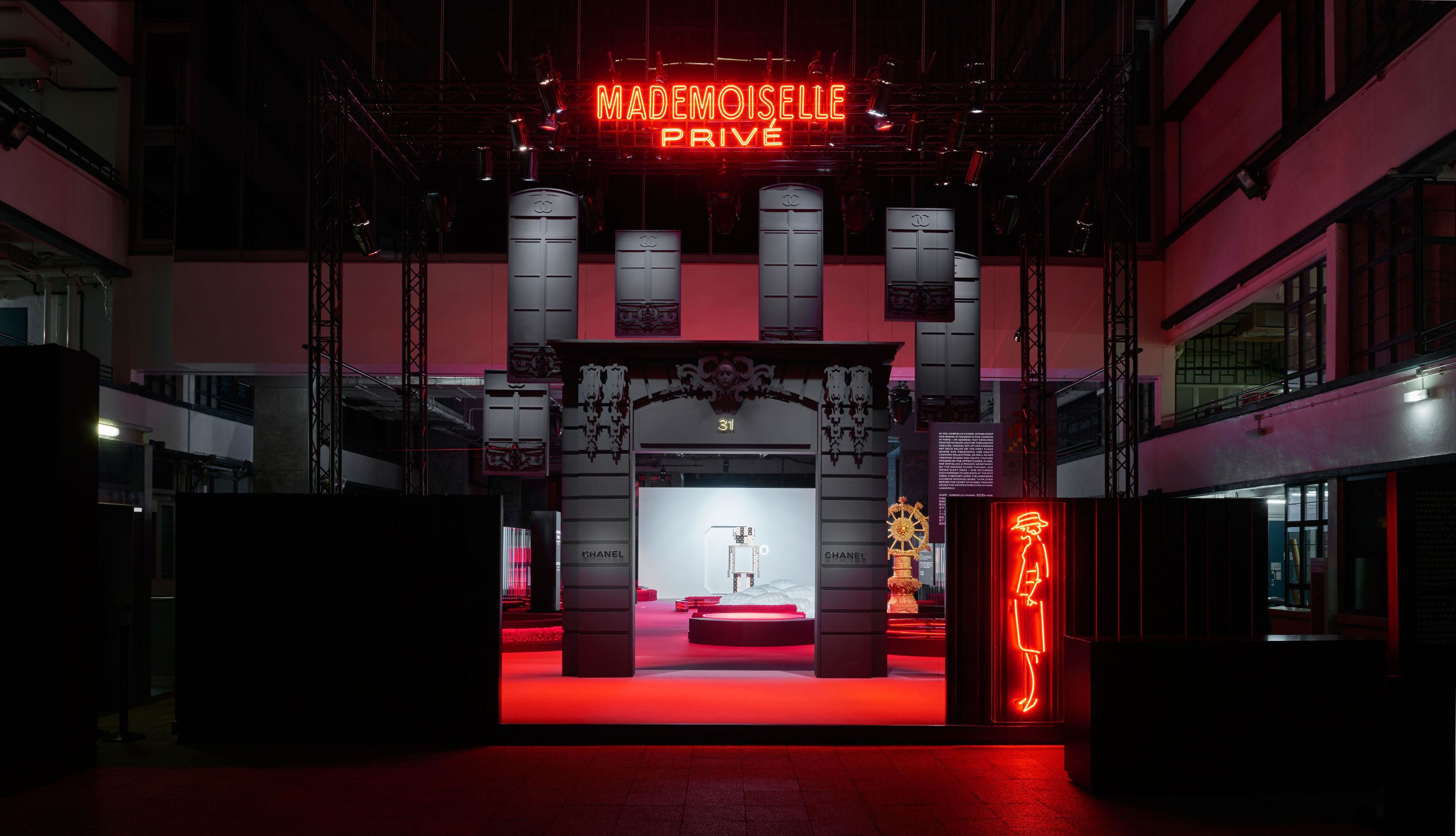 What to expect from Chanel’s Mademoiselle Privé Hong Kong exhibition

Following months of hype and anticipation, Chanel’s Mademoiselle Privé exhibition has officially made its stop in Hong Kong for a four-week pop-up. The exhibition, which is now temporarily located at the city’s design hub, PMQ, occupies two floors, and is split into seven sections with a total of 17 exhibits, all especially designed to take visitors on a seamless and immersive journey through time.

From the avant-garde vision and creative momentum set out by founder Gabrielle Chanel, to the innovative creations by successor Karl Lagerfeld (who’s been carrying on the house’s legacy for over three decades), visitors are invited to explore the dazzling history of the brand through an immersive exploration of the fundamental elements that have made Chanel one of the world’s most powerful luxury fashion houses for the past century. Curious to know what’s in store? Scroll down to discover what you can expect from Chanel’s Mademoiselle Privé Hong Kong exhibition. 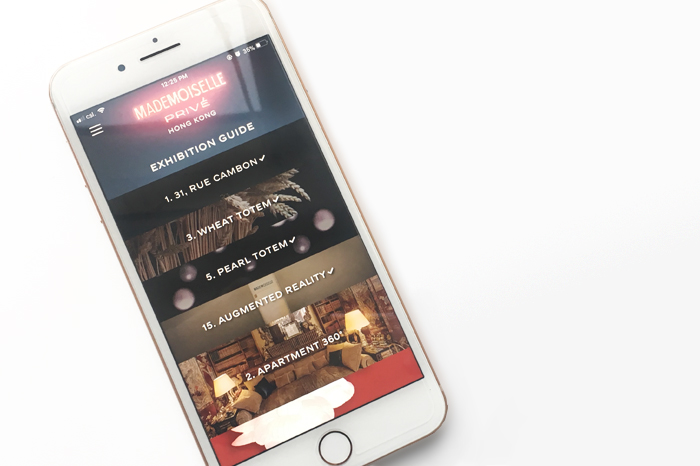 Before you even start your journey, you should download the Mademoiselle Privé app on your smartphone, which will allow you to book time slots for admission, register for workshops, and get the latest updates about the exhibition. The app will also provide detailed explanations of each installation through a series of videos as you walk through the exhibition. There’s even a special highlight at the Haute Couture section, where you’ll be able to see Gabrielle Chanel at work at the legendary workshop at 31 rue Cambon by pointing the phone’s camera at the door that says “Mademoiselle Privé” — a sign she used to hang out when she didn’t want to be disturbed during work. 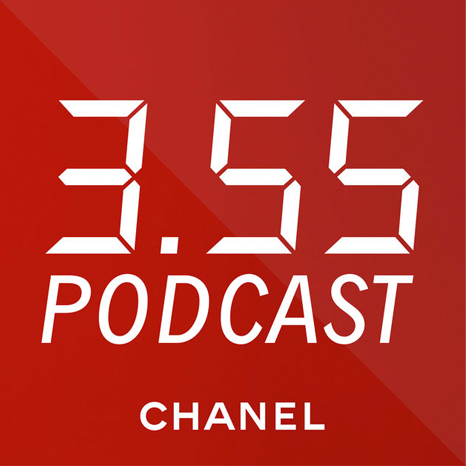 That’s not all: You can also listen to a series of podcasts specially recorded at PMQ for the occasion of the Mademoiselle Privé exhibition. These sections, titled 3.55 HK, are hosted by Paris and Tokyo-based American journalist Tiffany Godoy, who speaks to creative talents — including French actress and musician Alma Jodorowsky, founder of Liger concept store Hilary Tsui, and Cantonpop lyricist and fashion columnist Wyman Wong — about the theme of creation. Other than the Mademoiselle Privé app, these recordings are also available at Apple Podcasts, or at the 7th floor studio during the exhibition period. 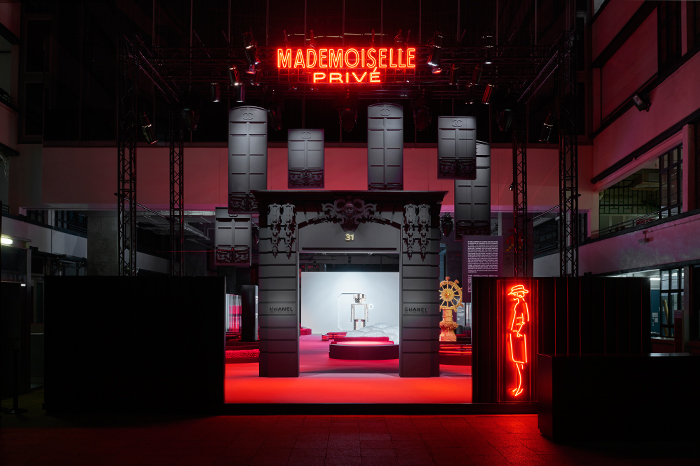 As you arrive at the exhibition, you’ll find yourself greeted by a blackened replica of the iconic façade of the historic building at 31 rue Cambon, Paris — the legendary address where Gabrielle Chanel famously set up her boutique exactly a hundred years ago in 1918. The building, which still stands today as the home of Chanel, includes a salon on the first floor where Madame Chanel presented her creations, and a studio and Haute Couture ateliers on the upper floors where she worked her creative magic. Chanel also installed a private apartment later on in 1935, which she used to entertain clients and friends. Interestingly, she never slept there, but instead, returned every night to her suite at the Ritz Paris.

3. The Red Garden: The many iconic symbols of Gabrielle Chanel Step inside the venue and you’ll be greeted with a red garden featuring a number of totems that represent Gabrielle Chanel’s favourite elements. These include the passionate colour red, the camellia flower that was once worn by men, the wheat that stands for prosperity, the illuminating pearls, as well as the lucky numbers 5, 19, 21, 31 and 32, which all symbolise a different milestone in the legacy of Chanel.

Two of these totems, which include the camellia-shaped paper lantern and the Dropping Pearls video, are commissioned artworks exclusively created by Hong Kong artists SK Lam and Anothermountainman. The garden, on the other hand, is actually a 3D imagining of an abstract textile pattern created by avant-garde Russian artist Ilia Zdanevitch (a.k.a. Iliazd), who was a close friend and collaborator of Gabrielle Chanel. Step through the striking white door, where you will experience the makings of Chanel N°5 through its five essential raw ingredients — May rose, jasmine, ylang ylang, sandalwood and aldehydes — stored in a copper lab installation. This century-old scent is the very first woman’s perfume to carry multiple notes. “I wanted to give women a scent, but one that was artificial. I mean really artificial, like a dress; manufactured. I am a dressmaking craftswoman. I don’t want rose or lily of the valley; I want a scent that is a compound,” stated Gabrielle Chanel when she asked French perfumer Ernest Beaux to create her very first fragrance. The result? A revolutionary abstract fragrance that remains one of the most iconic fragrances of all time. Haute Couture represents and defines the incredibly rare character of Chanel, therefore, it’s always been the house’s number one mission to safeguard the unique savoir-faire, traditions, and exquisite attention-to-detail of this storied métier. Here, you’ll be guided through a dreamlike journey through different stages in the making of Haute Couture, which includes fabrics cascading from the ceiling, and archive pieces that demonstrate how Karl Lagerfeld has managed to blend traditional and sophisticated fabrics with new techniques and innovative materials (such as concrete embroidery, neoprene, laminated lace and 3D printing), delivering outstanding results. As Lagerfeld himself explained after presenting a 3D-printed Chanel suit in 2015, “The idea was to take the most iconic jacket from the 20th century and turn it into a 21st century version which was technically not possible at the time it was born.” 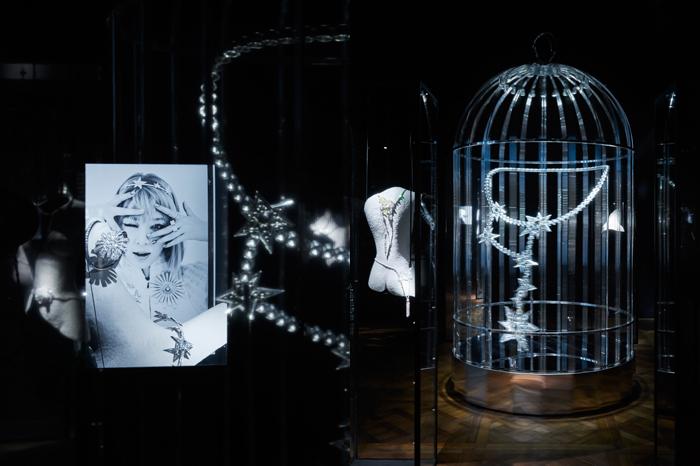 In 1932, during the era of the Great Depression, Gabrielle Chanel made a bold move by creating her very first (and what was to be her only) fine jewellery collection. The collection, titled Bijoux de Diamants, featured celestial motifs such as comets, stars and suns, which were all inspired by the symbols she saw on the pavement at the abbey in Aubazine, where she was sent in 1895. True to her innovative spirit, she presented these cosmic pieces in her own home at 29 Faubourg Saint-Honoré instead of her boutique, and she also styled them on lifelike wax busts instead of in jewel cases and cushions, sending out the message that her jewellery was not made to be admired, but to be worn by real women, both day and night.

You’ll get a chance to see Karl Lagerfeld’s re-edition of the Bijoux de diamants collection up-close in the final area, where the creations can be found draped on fragmented plaster cast busts and hands in glass cases. These high jewellery pieces are also display along with photo-booth snapshots of the house’s closest friends. From G.Dragon, Pharrell Williams to Caroline de Maigret, these world-famous stars of today are all photographed wearing the re-edition pieces, which shows the eternally modern spirit of Gabrielle Chanel and her creative vision.

7. Visite Nocturne: A conversation between Karl Lagerfeld and the late Gabrielle Chanel 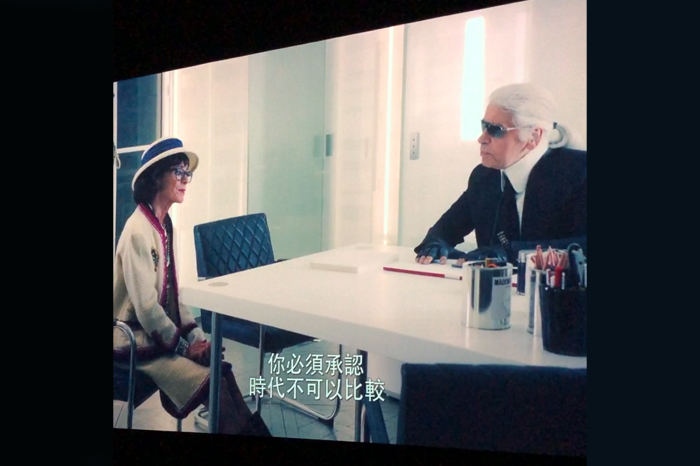 Before you leave, don’t forget to stop by the screening room, where one of Chanel’s many short films, Visite Nocturne, is being played on repeat. We highly recommend you to watch it from start to finish, as it involves a very hilarious conversation between Karl Lagerfeld and the ghost of Gabrielle Chanel (played by actress Geraldine Chaplin).

Chanel’s Mademoiselle Privé Hong Kong exhibition is open to all, free of charge, and is running from now through 10 February 2018. Find out what the local celebrities and international stars think about the exhibition in the video below.