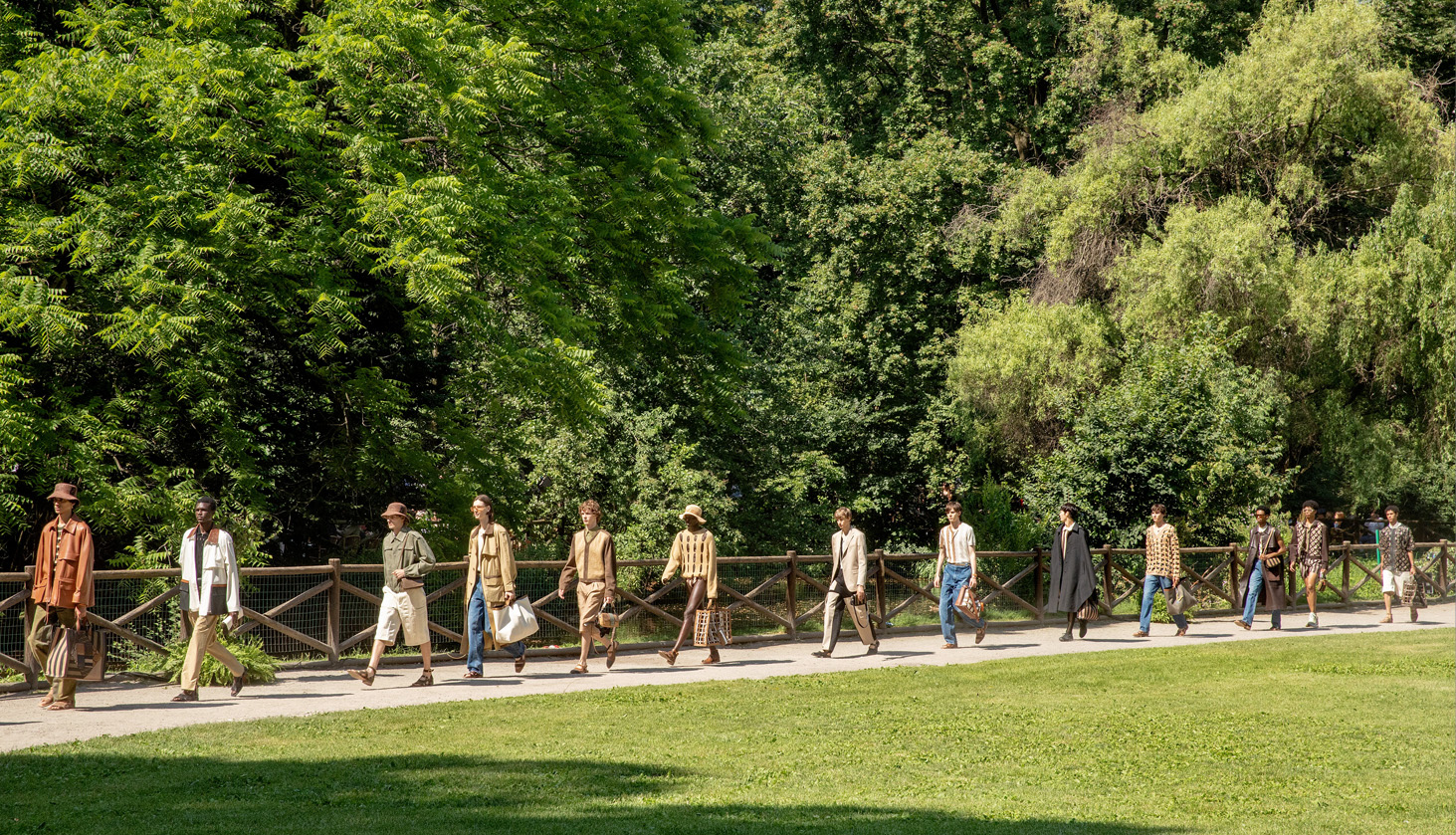 Ever wondered what the creative directors of the world’s top fashion houses do in their downtime? Silvia Venturini Fendi at Fendi enjoys spending hers in the garden of her country house just outside of Rome, where she heads off to during the weekends to grow roses, vegetables and fruits. In fact, this favourite pastime became the key inspiration behind the house’s menswear collection for the Spring/Summer 2020 season, recently presented in a runway show set within the beautiful gardens of Milan’s Villa Reale.

To offer the creations an extra dose of distinctive artistry, Fendi sought the help of Italian film director Luca Guadagnino — whom she commissioned for a short film entitled The First Sun (2005), before collaborating again with Guadagnino as an Associate Producer on both Io Sono L’Amore (2009) and Suspiria (2018) — specifically for his talent in capturing and portraying romanticism and sensitivity. The collaboration extended from the graphic prints — including the “Botanics for Fendi”  prints and geometric ones — to whimsical accessories and even the casting, soundtrack and location of the show, working hand-in-hand to paint us a vivid picture of a dialogue between man and the great outdoors, expressed through a collection of sophisticated sartorial creations emphasising functionality and utility.

The runway presentation started off with an earthy, muted palette of greens, beiges and browns, all combined with natural materials such as silks, cottons, wools, cashmere, leathers, suede and denim. Sartorial workwear including overalls and cargo pants appeared throughout the collection, imbued with a sense of lightness and air through strategically-placed slits and openings on roomy volumes and perforated garments. There were also big, detachable pockets zippered onto place, giving an extra hint of utilitarian flair. Silk pipings, pervasive treillage-effect grids and nets, meanwhile, appeared on the more sleek, elegant pieces including jackets and sheer shirts (in waterproof organza), vests, blazers and shorts. They demonstrated the house’s exquisite savoir-faire, and at the same time, set a modern backdrop for Guadagninos’ sketched up botanical prints for a painterly flair.

Accessories, on the other hand, continued on with the gardening theme and featured gardening baskets and bucket bags in a water can-inspired design as well as raffia hats with FF logos and work gloves. There were also big totes in net or cut-out leather that came with a removable pouch. The iconic Baguette and Peekaboo bags also made an appearance, available in an array of materials from precious exotics to woven raffia and classic Selleria Italian leather. Footwear offerings included high-tops and trainers in canvas and rubber developed in collaboration with Japanese label, Moonstar, as well as croco-printed loafers, sandals, boots and Mary Janes for men. Watch the show below for a full look at the collection.