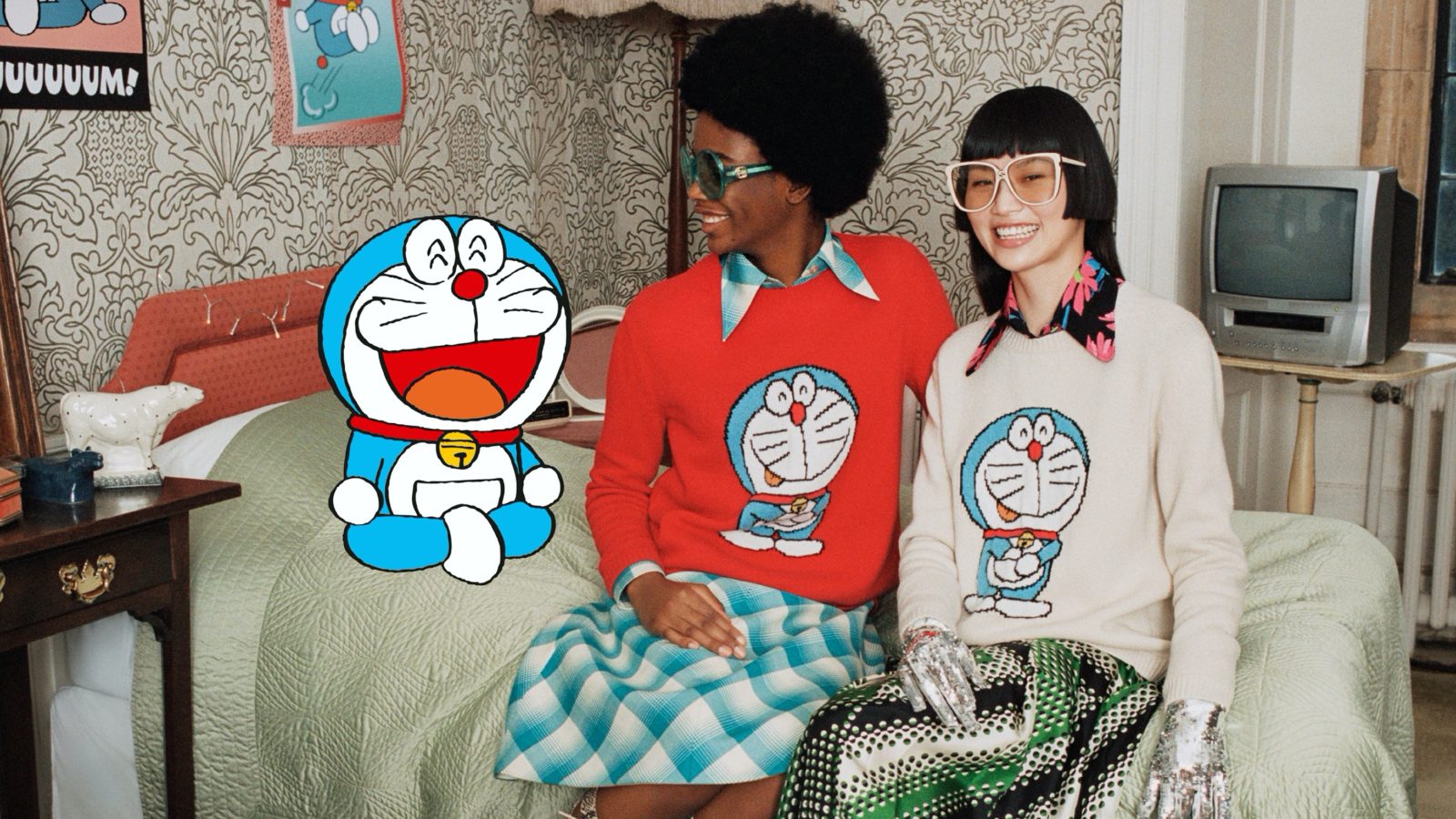 Another designer collaboration, another nostalgic reappearance of a beloved childhood character.

If there was something that would lift spirits during prolonged drags of dreary moods, we’d wager it would fall under the category of at least one of these: A flicker of magic. A familiar face. A touch of imagination. Luckily, they’re all qualities that pertain to Gucci’s latest lead, Doraemon.

A cat-type robot, Doraemon is the endearing protagonist of Fujiko Fujui’s manga, first written in 1969. The story is adored across generations, and surrounds main character Doraemon, sent from the XXII century, and his adventures with Nobita Nobi, a young, absent-minded boy living in Tokyo. With the help of Doraemon’s impressive selection of snazzy tech and gadgets which he pulls from his four-dimensional pouch (think: shrink ray, anywhere door), they navigate friendship, teamwork and challenges.

Marking the 50th anniversary of the Japanese manga, and in the same beat, 100 years since the establishment of the Italian fashion House, the collection was first teased and previewed at Gucci’s Epilogue — an alternate collection that subscribes to creative director Alessandro Michele’s tradition-breaking, experimental vision. There, Doraemon, in his classic cerulean-blue self, dances vividly — jovial; full of expression — atop the heritage ‘GG’ motif primed upon the vast selection of ready-to-wear separates, shoes, bags and various accessories including wallets and silk scarves.

As a special tribute to this Chinese New Year, Gucci has also unveiled a seasonal exclusive Doraemon; cheekily disguised as an ox for an apt dedication to the zodiac year.

Instead of its original blue coat, the mischievous cat-robot slips on a golden suit with two pointed horns, cone-shaped ears and a fur-tipped tail. Like previous positioning, Golden Ox Doraemon stands proudly over the iconic monogram in either an all-over pattern animated in various poses or as a perfectly poised stand-alone print.

It’s worth noting that the Gucci x Doraemon seasonal collection can be identified not only by the surprise appearance of Doraemon on a crossbody pouch, but also the deep burgundy trim sidled with vintage gold hardware; both nods to the auspicious festive colours, red and gold.

The Gucci x Doraemon collection is now available online and at your local Gucci boutique.

Gucci Chinese New Year 2021 Doreamon
You might also like ...
Style
It’s adventure time with Gucci and The North Face’s new collaboration
Style
Here’s everything you need to know about Gucci’s Spring/Summer 2021 collection
Lorria Sahmet
Editor
With two years in luxury retail, Lorria continues to cover fashion, food and lifestyle here at Lifestyle Asia. When not roaming garden centres for new plants in her indoor jungle, catch her hunting down the best fries in the city. She's happiest by the ocean with a fishbowl-glass of Aperol Spritz.
Food Lifestyle