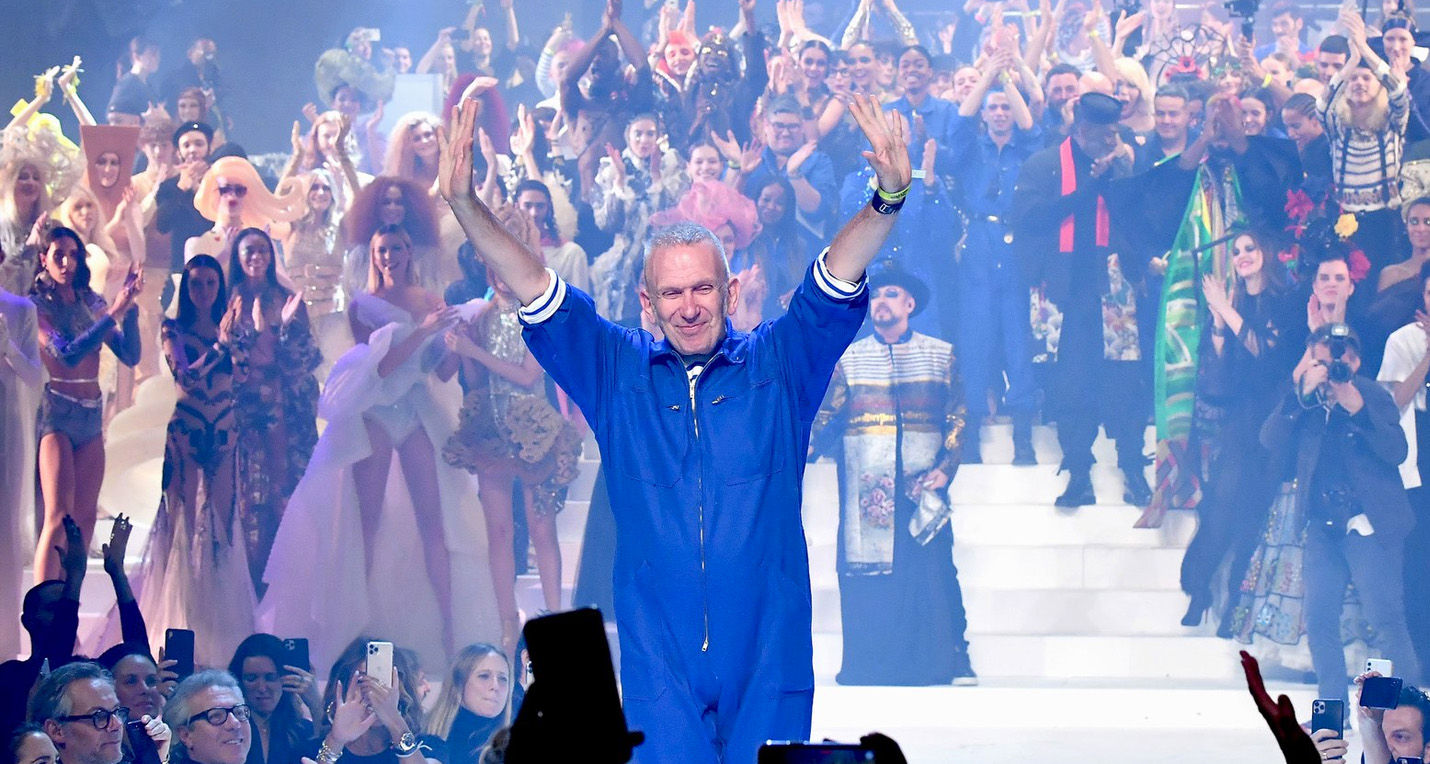 It was only last week that esteemed French designer Jean Paul Gaultier surprised everyone with an unexpected message over social media, casually announcing, in a quirky video, that this season’s haute couture show would be his very last.

Gaultier’s 50-year career has spanned countless iconoclastic creations that have brilliantly transformed the French fashion landscape. While the fashion crowd is still reeling from his announcement, the designer made sure to wow us with a grand finale that will surely go down in fashion history.

“There is not one kind of beauty, there are many kinds,” stated Jean Paul Gaultier in his call for an open model casting for this final show. While topics of diversity, gender fluidity and sustainability have been hot topics in recent years, the designer has dedicated all five decades of his career to celebrate — through great imagination, innovation and humour — all the distinctive, unorthodox beauty through different shape, colour, size, ethnicity, gender or age. It was no different for the designer’s Spring/Summer 2020 — only bigger and better.

Joining in to honour the legendary designer’s final couture show was an ultimate cast of A-list cameos including Dita von Tesse, Beatrice Dalle, Mylene Farmer, amongst others, as well as star models Gigi and Bella Hadid, Irina Shayk, Winnie Harlow, Yasmin Le Bon, Coco Rocha, Jourdan Dunn, Karlie Kloss and more. Supermodels from the 80s and 90s including Farida Khelfa, Karen Elson and Estelle Lefebure also returned to the runway to support their old friend, while Michael Jackson’s 21-year-old daughter, Paris, made her catwalk debut, strutting down the runway in a hippie look in ombre colours, completed with snakeskin trousers and talismanic jewellery.

The collection revisited many of Gaultier’s most iconic works throughout the decades, including the ‘walking coat hanger’ and, of course, the famed cone bra and corset that he created for Madonna’s concert performances. He even sent six black-suited male models carrying a black coffin onto the stage, which was then opened to reveal model Issa Lish, dressed in a minidress with frilled, puff-sleeved. Sailor stripes, another of Gaultier’s signature designs, have been reinterpreted into pleated top, parachute gown, puff-sleeved sweater and more.

Back in his younger days, the designer would pick up worn pieces from flea markets which he would then revive. As an advocate shedding light on the waste issue caused by the fashion industry and the practice of burning dead stock, Gaultier revealed that this very last collection of his is also his “first upcycling haute couture collection”. Out of the two hundred looks he sent down the runway, only about 50 were entirely new, revealing that “the rest was a mix of ready-to-wear” and “there are creations made with the jeans I’ve worn.”

The 90-minute show ended with a high note over Boy George’s performance of Church of the Poison Mind, where everyone got up on their feet and danced to a joyful celebration of Gaultier’s ever-inspiring career.

From gender-bending styles to sustainable couture, Gaultier’s farewell show is a real spectacle that demonstrated 50 brilliant years of taking pleasure in life through fashion and his refusal to conform. As to where the 67-year-old is heading next, the designer is keeping his lips shut for now, apart from his teasing video message that says “I have a new concept. I will tell you about it later, all the little secrets. To be continued! Kisses!” I guess we’ll just have to wait and see.

Haute Couture Jean Paul Gaultier SS20 Spring Summer 2020
You might also like ...
Style
Givenchy’s FW20 menswear collection adds a nocturnal spin to sleek modern tailoring
Style
All the highlights that went down at Paris Fashion Week Men’s FW20
Cindie Chan
Style Editor
Fashion blogger turned editor, Cindie has spent over seven years covering all things stylish in the digital world. When she’s not busy poring over the latest covetable releases or attending the most talked-about fashion events in town, you’ll find her enjoying some precious downtime with her newborn son and sweet dog Rosy.
Style Fashion Jewellery Watches Events Seafood dogs for adoption
Sign up for our newsletters to have the latest stories delivered straight to your inbox every week.