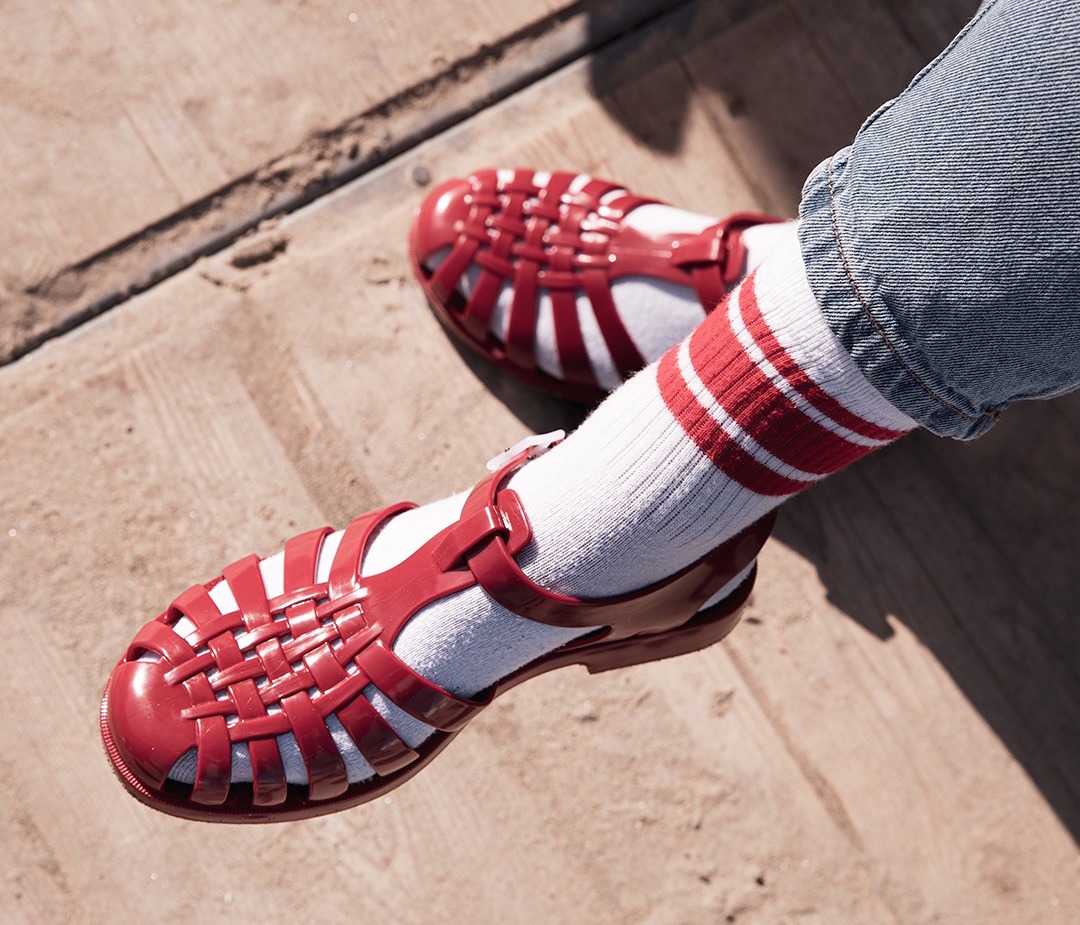 How jelly sandals resumed reputation as a summer must-have

Have you got a pair of jelly sandals in your summer closet yet?

From New York to Los Angeles to St. Malo, plastic jelly sandals are everywhere, seen on the young and old as spring draws to its end. It took a picture of Blake Lively wearing the iconic shoes around town for the fashion world to go crazy and the plastic sandal with braided straps to return to the forefront of the scene — if it ever went away.

There’s been much talk of slides and Crocs as the shoes of summer 2021, driven more by their comfort than by their refined aesthetics. And it’s true that, for some time, clothes and accessories once seen as “ugly” seem to be taking their revenge, winning over the hearts of even the most fervent fashion fans. And now, in the same vein, word is that plastic jelly sandals are making a comeback… if they ever really said goodbye to feet in search of comfort during the summer months.

Researching an article about the return of jelly sandals revealed that people are typically “fors” and “againsts” — not to mention those who didn’t even know that these shoes existed. And, after being met with a chorus of “oh no,” “they’re too ugly,” “how awful,” a certain fashion journalist may even have ended up committing herself to coming to the office in jelly sandals if the French national soccer team wins the Euro tournament. Anyway, while this may seem anecdotal, it actually reflects the divisive nature of these sandals, which are, it transpires, 70-something years old. In fact, the Méduse-branded version is 75 years old.

Between nostalgia and fashion trauma

In early June, there was much talk surrounding the jelly sandals for the simple reason that the fashion icon, Blake Lively, was spotted in the street wearing a brown pair, as revealed by Elle magazine. And it didn’t take much more than that for the world to be ringing the return of these sandals of discord. However, a cursory internet search reveals this same supposed return in 2020, 2019 and 2018, with major luxury brands even surfing on these various waves to offer (very) expensive models.

In fact, jelly sandals have never really gone away. But they’ve always proved divisive. People generally find them super cute on toddlers, but much less so on adults. And it’s perhaps precisely in childhood that our love (or hate) for these nevertheless legendary sandals is forged. There are people who seem to have experienced this footwear as something verging on trauma — no joke — while others are nostalgic. And that’s where we find our “fors” and our “againsts.”

Still, these shoes — often associated with fishing — have much stacked against them, suffering from a rather negative image. Footage of the French comedian Elie Semoun taking to the stage at the 2019 Caesars — France’s equivalent of the Oscars — in swim trunks and swim cap, complete with jelly sandals — much to the merriment of the audience — says a lot about the image of these iconic shoes.

No shortage of style

The fact remains that — whether you like it or not — jelly sandals are go-to footwear for millions of people every summer, all around the world. In terms of style, you can say what you like, but these shoes do have the power to accessorise any outfit, from pants and shorts to skirts and dresses, whether short or long. Not to mention that they come in a variety of styles — with or without heels — and colours, with bright or pastel shades, and sometimes even with glitter — and we all need some sparkle in our lives right now.

In addition to their charm, jelly sandals are also highly practical. That’s why they’re often a summer suitcase staple for children. Indeed, they stop kids getting hurt on pebble beaches, or when they go hunting for crabs among the rocks.

The jelly sandal has also given rise to another eternal debate: with or without socks? Potentially making them a year-round shoe. On this point, the French appear to have chosen their camp, favoring the “no socks” look, as recently demonstrated on Instagram by Christelle Gauzet, winner of the 2008 edition of “Koh-Lanta,” a reality game show based on the popular “Survivor” format.

Hero and featured image courtesy of Meduse Original via Facebook