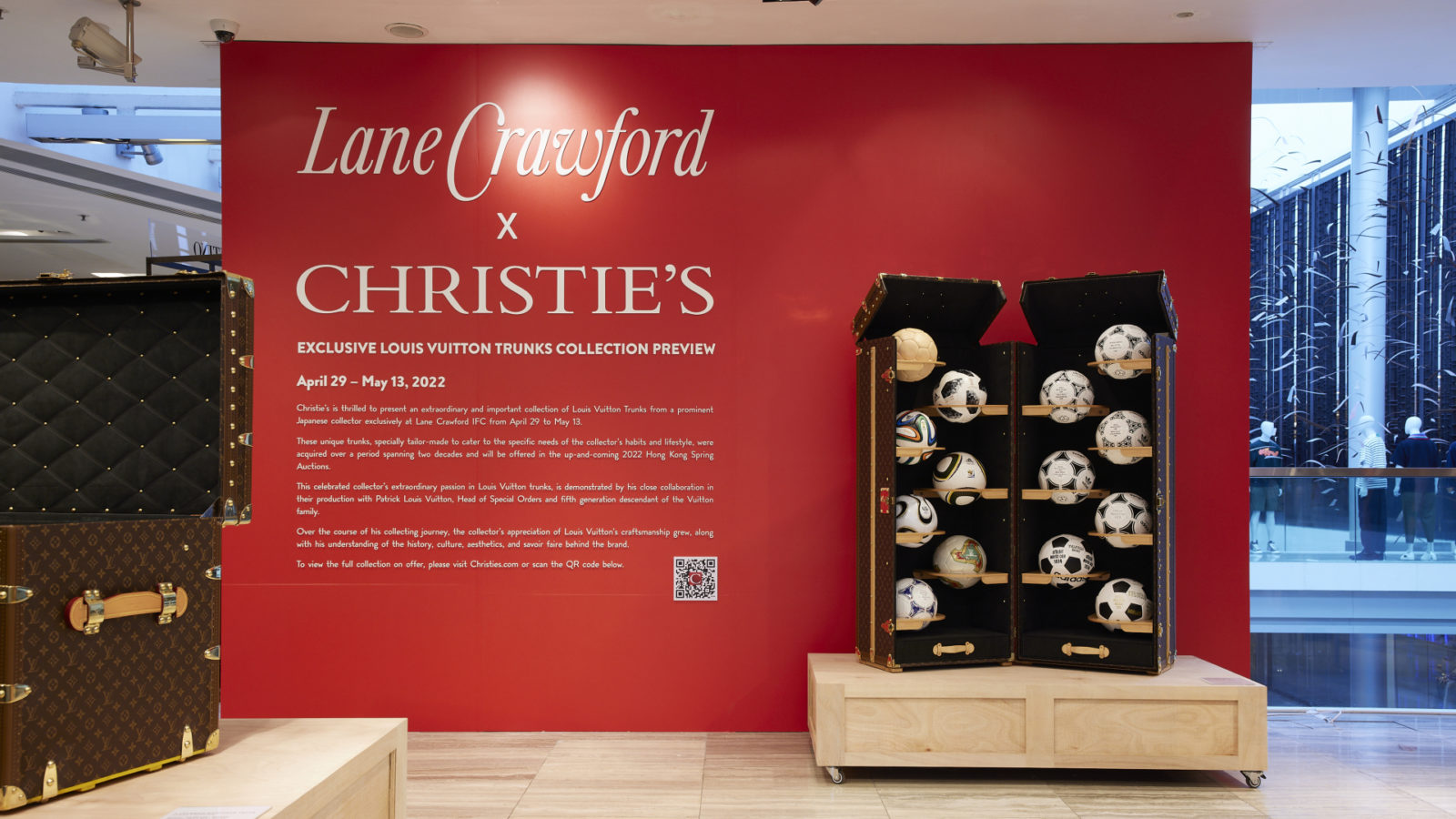 Lane Crawford has partnered with British auction house Christie’s to present a collection of rare and exclusive Louis Vuitton trunks, available to check out at Lane Crawford ifc mall from today until 13 May.

Oh, how we love Louis Vuitton trunks — monogrammed canvas on sturdy constructions, subtle yet confident in showing off their bespoke craftsmanship and prestigious heritage.

The luggage-atelier-turned-fashion-powerhouse’s legacy creations are among some of the most coveted collectibles in the contemporary era, and rightfully so. From staying true to understated classic palettes to crossing paths with Supreme and Jeffree Star (love him or hate him, having an LV monogram shade to call your own is an achievement in itself), Louis Vuitton breaks no sweat in capturing the hearts of generations.

In light of Christie’s Handbags and Accessories Spring and Autumn live auction on 23 May, Lane Crawford is presenting an exclusive preview of all Louis Vuitton trunks on offer at their ifc mall location. Undoubtedly unique, this phenomenal collection is acquired by a Japanese private collector over the span of 25 years, amassing monumental pieces such as the FIFA World Cup trunk and special orders such as the night picnic monogram trunk with telescope. Go have an in-depth look at these masterpieces from now until 13 May: even if you don’t bid later, the images in your mind are free to cherish forever.

The pinnacles of luxury and football collide to birth this ultimate collector’s must-have: in commemoration of the 2018 FIFA World Cup, this 1-in-25 monogram trunk comes populated with re-edition versions of 13 adidas official match footballs since 1970, each signed by the winner of their respective tournament.

A 14th football exclusively designed by Louis Vuitton completes the collection, making for a grand prize everyone would love to take home.

Designed jointly by Patrick Louis Vuitton, the late former head of special orders and fifth-generation descendant of Louis Vuitton, and the Japanese collector, this trunk encapsulates the essence of a perfect night picnic — a full set of plates and cutlery accompanies a pair of champagne flutes, while a Vixen astronomical telescope unveils the many wonders of the starry sky.

It was released in 2014 at the Embassy of France in Japan to celebrate 160 years of diplomatic relations between the two nations.

Featuring storage compartments for books, sheet music and a typewriter, this desk trunk for British conductor Leopold Stokowski is certain to appease those in tune with practicality and historical significance.

This upright piece unfolds to reveal a collapsible desk and functional shelving system, serving as an object of ingenious marvel.

On the topic of luxury collectibles, discover the hottest statement bags this summer, or 10 Gucci silhouettes that are here to stay, forever.

Hong Kong Louis Vuitton Lane Crawford Christie's louis vuitton trunks
Michelle Chan
Hotel living enthusiast who is into anything remotely goth. Listening to Army of Lovers and HIM with noise-cancelling headphones in the streets of Wan Chai, juice in hand. Email me anything interesting!
Sign up for our newsletters to have the latest stories delivered straight to your inbox every week.