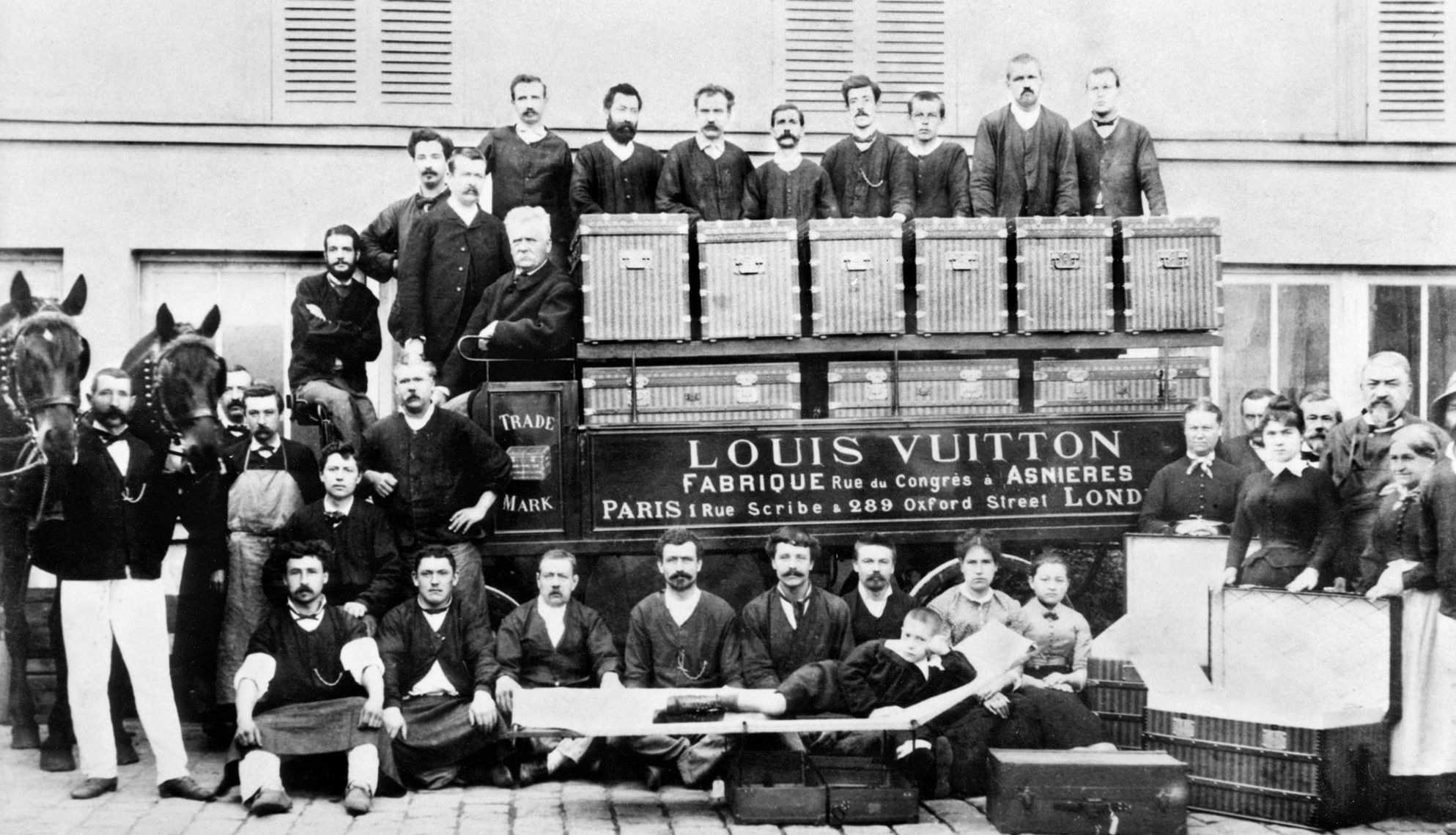 Legacy of Style: Louis Vuitton’s voyage to success is the ultimate rags-to-riches story

Ask anyone and most people will agree that Louis Vuitton is one of the leaders in the luxury world today. However, few may know that the giant fashion house we now see didn’t have a privileged start at all. In fact, it couldn’t be further away from the truth (the brand’s story didn’t actually begin in fashion either!). Scroll down as we uncover this ultimate tale of rags to riches, and discover how a penniless runaway managed to build a 160-year-old luxury empire with nothing but pure innovation, determination and skills.

The story of the luxury house began in the early 1830s, when the 14-year-old Louis Vuitton left his family mill in Jura and spent no less than two years travelling to Paris entirely by foot. Having nothing on him apart from the determination to change his life for the better, the teenager took numerous small job during his 280-mile journey, before successfully landing a job in Paris working as an apprentice for famous box maker and packer Romain Maréchal.

Packing for the Parisian royals and elites

Impressed by the young Vuitton’s diligence, seriousness, and perseverance, Monsieur Maréchal believed that these outstanding qualities would skilfully serve his business and aspirations, and he was right. Within a few years, Vuitton gained a reputation as one of the best in his field in the city, and was even appointed as the personal packer and box-maker for Empress Eugéni, wife of Napoleon Bonaparte, in 1853. As a result, Vuitton quickly became one of the most sought-after craftsmen amongst the rich and noble in Paris.

In 1854, Louis Vuitton set up his own shop on Rue Neuve des Capucines, Paris, marketing himself as a “layetier et emballeur”, or specialist packer and luggage-maker, offering “specialty packing for fashion” for those seeking a professional who could safely pack the most fragile objects.

To accommodate the ever growing popularity in train travels, and the increasing demand for an innovative and convenient trunk design, Vuitton introduced its very first flat trunk in 1858 featuring a flat top and bottom design that no one had ever seen before. Previous trunks at the time had arched tops to prevent water from seeping in when they got loaded into the cargo of ships or trains, but this new design, perfected by Vuitton himself, was not only stackable, but was also created with the lighter and sturdier poplar wood that made it easier to transport. He then covered it up with a waterproof pearl grey canvas he called Trianon instead of using traditional leather, which easily cracked and was prone to mould and bad odours. The flat trunk turned out to be a spectacular success, and Vuitton decided to expand and move production out of the city to Asnières due to burgeoning demands.

In the spirit of a true innovator and entrepreneur, Vuitton didn’t stop there. He, along with heirs thereafter, continued working hard to improve the strength and lightness of their creations, while revitalising fabrics and patterns based on different backgrounds — such as a stripped canvas called Rayée, as well as a checkered pattern called Damier — to fight against counterfeits.

Vuitton’s business was established right at a time when travellers were eager to explore the newly established shipping and train routes, and exotic travels called for specific luggages. For this reason, made-to-order requests were pouring in from everywhere, and Vuitton began creating luggages and boxes with special designs tailored to the needs of the new generations constantly on-the-go.

Some of the most celebrated designs included the vertical steamer trunk, which was first introduced in 1875. It featured a vertical and relatively light portable wardrobe complete with drawers, compartments and hanging space, allowing jet-setters to travel in style with the entire contents of their closets remaining in impeccable order, without the need to unpack at all.

Another extraordinary invention worth a mention was the camp-bed trunk, which could be expanded into a folding bed. The ingenious creation was commissioned by Italian explorer Pierre Savorgnan de Brazza, who ordered two for his expedition to the Congo in 1905, both with beds adapted to his size.

Most people only know Georges Vuitton, son of founder Louis Vuitton, as the creator of the house’s signature monogram canvas — a juxtaposed pattern of flowers, plants, geometric shapes and the “L” and “V” initials — which was meant to honour his father (who passed away four years prior in 1982)  and to protect the brand from imitations. He was, in fact, also responsible for adding another invaluable invention that guaranteed the impenetrable character of every Vuitton creation.

Known as the tumbler lock, the creation was developed by watchmakers and featured an ‘incorruptible’ mechanism, which essentially transformed the trunks into safes. Each lock was specially devised with a unique numbered key, which made it totally unpickable, thus ensuring the inviolability of these luggages.

From trunks to bags

During World War I, luxury productions at Louis Vuitton’s factory in Asnières were forced to temporarily shut down, but by the late 1920s, orders from the world’s richest and most stylish — including Coco Chanel and the Duke and Duchess of Windsor — began to roll in. From 1930, the house started expanding its productions to travel bags, which included the Keepall bag, the Noé bag (designed to transport five bottles of champagne) and the Steamer bag (used to keep dirty clothes separate from clean ones). These bags, originally designed for luxury travellers, all went on to inspire many of the most celebrated Louis Vuitton handbags of today.

Having previously focused on accessories, Louis Vuitton officially marked its new voyage into the fashion world in 1997 by appointing Marc Jacobs as its artistic director, who designed and debuted the house’s very first ‘prêt-à-porter’ collection in the following year. According to Vogue US, Jacobs explained, “What I have in mind are things that are deluxe but that you can also throw into a bag and escape town with, because Louis Vuitton has a heritage in travel.”

In 2013, Nicolas Ghesquièire succeeded Marc Jacobs as the new artistic director of Louis Vuitton, and has been continuing on the house’s legacy and spirit of travel by creatively reinterpreting the house’s archival pieces and iconic elements into new contemporary renditions.

From camp beds to car tires, champagne sets to DJ sets, and portable libraries to tea services, Vuitton has continued to demonstrate to the world all the unlimited possibilities of a well-designed trunk. To this day, customers can also order their own special trunks at any Louis Vuitton store any time of the year. Your order will then be made by hand using age-old techniques at the house’s special-order atelier, located in the former Vuitton family residence in Asnières-sur-Seine, Paris, which is currently run by Vuitton’s great-great-grandson, Patrick.

To keep reinventing the house’s art of travel while celebrating the union between artisanal expertise and savoir-faire, Louis Vuitton launched the Objets Nomades in 2012. The collection taps some of the world’s most innovative contemporary designers each year to design new travel-inspired furniture to be presented at the Salone del Mobile in Milan as part of Milan Design Week.

From a small village boy to a master trunk-maker for the rich and noble, Louis Vuitton’s voyage to success is a fascinating story depicting the foundations of a brand that would go on to change the world of luxury lifestyle forever, transforming the art of travel into a real art of living.

Fashion Style Louis Vuitton Designers where to shop style gallery legacy of style brand history
Cindie Chan
Style Editor
Fashion blogger turned editor, Cindie has spent over seven years covering all things stylish in the digital world. When she’s not busy poring over the latest covetable releases or attending the most talked-about fashion events in town, you’ll find her enjoying some precious downtime with her newborn son and sweet dog Rosy.
Style Fashion Jewellery Watches Events Seafood dogs for adoption
Sign up for our newsletters to have the latest stories delivered straight to your inbox every week.