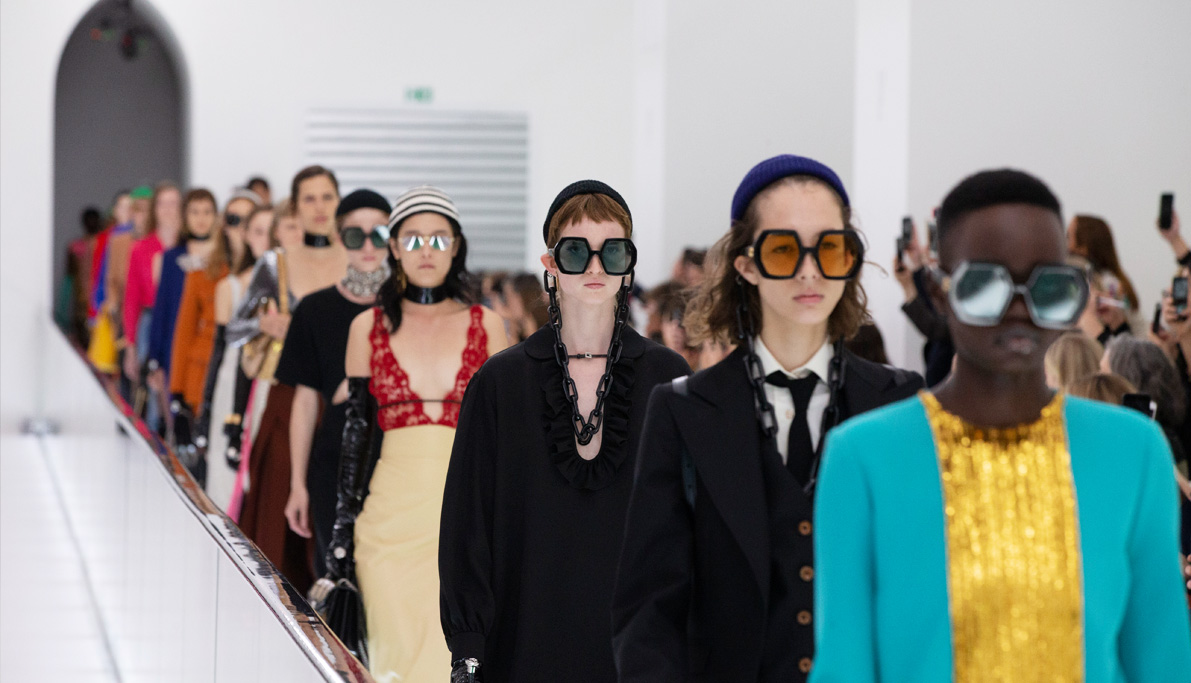 Ever since his appointment as Gucci‘s creative director almost five years ago, Alessandro Michele has enchanted the world with his thrilling new vision for fashion — placing maximalism, quirkiness and eccentricity front and centre, while also incorporating vintage throwbacks from the best eras.

Recently, the designer felt it was time for a reboot. “I’m afraid of getting bored,” he said in a post-show press conference, according to Vogue US. “I always have to try something new.”

So for his Spring/Summer 2020 collection at last week’s Milan Fashion Week, Michele continued writing his music, but stated in an interview, “I want to play a different song.” Titled ‘Gucci Orgasmique‘, Michele continued to evoke the 70s while inserting inspiration from another era he admires: the 90s, the powerful fashion era dominated by Tom Ford and Miuccia Prada.

The show for the season was hosted at a clinical space imagined by the designer himself, completed with rows of white chairs surrounded by clean lines and intense lighting. As the series of metal doors started rolling up and the lights switched from red to white, models began appearing, motionless and emotionless, all dressed in head-to-toe ivory white uniforms with utilitarian buckles and elongated sleeves.

These 21 white-washed looks (which caused some serious mental health-related backlash) are considered a statement for a clean slate, expressing, through the idea of straitjackets, the elimination of self-expression. According to Michele, it’s exploring the idea of “humanity and uniforms. A uniform is something that blocks and constrains you — that makes you anonymous.” The straitjacket, in his opinion, is “the highest type of uniform”.

The second part of the show, presenting the actual collection, opened with something tremendously different. Thinking “What happens if one of my girls should try to be sexy?”, Michele embraced freedom and also the power underlying the sexiness that populated the 90s in the rest of his collection.

To do so, the designer’s signature quirk and kaleidoscopic prints were stripped down, replaced with much simpler, graphic colour-blocks with lean lines, infused with a surprising dose of kinkiness in the form of riding crops (a reference to S&M but also to the brand’s equestrian heritage), black vinyl chokers, barely-there sheer pieces, scoop-neck leotards, high-slit midi skirts, and more.

Attention grabbing accessories remained, this time in the form of oversized thick-framed sunglasses with exaggerated chains, horse whips, and straw bags in the shape of a cat’s head, amongst others. The highlight was inarguably the horsebit logo-embellished backpack comprised of a full-size GG-monogrammed pillow, which has already become one of the most talked-about accessories of the season.

Watch the full Gucci Spring/Summer 2019 fashion show in the video below.