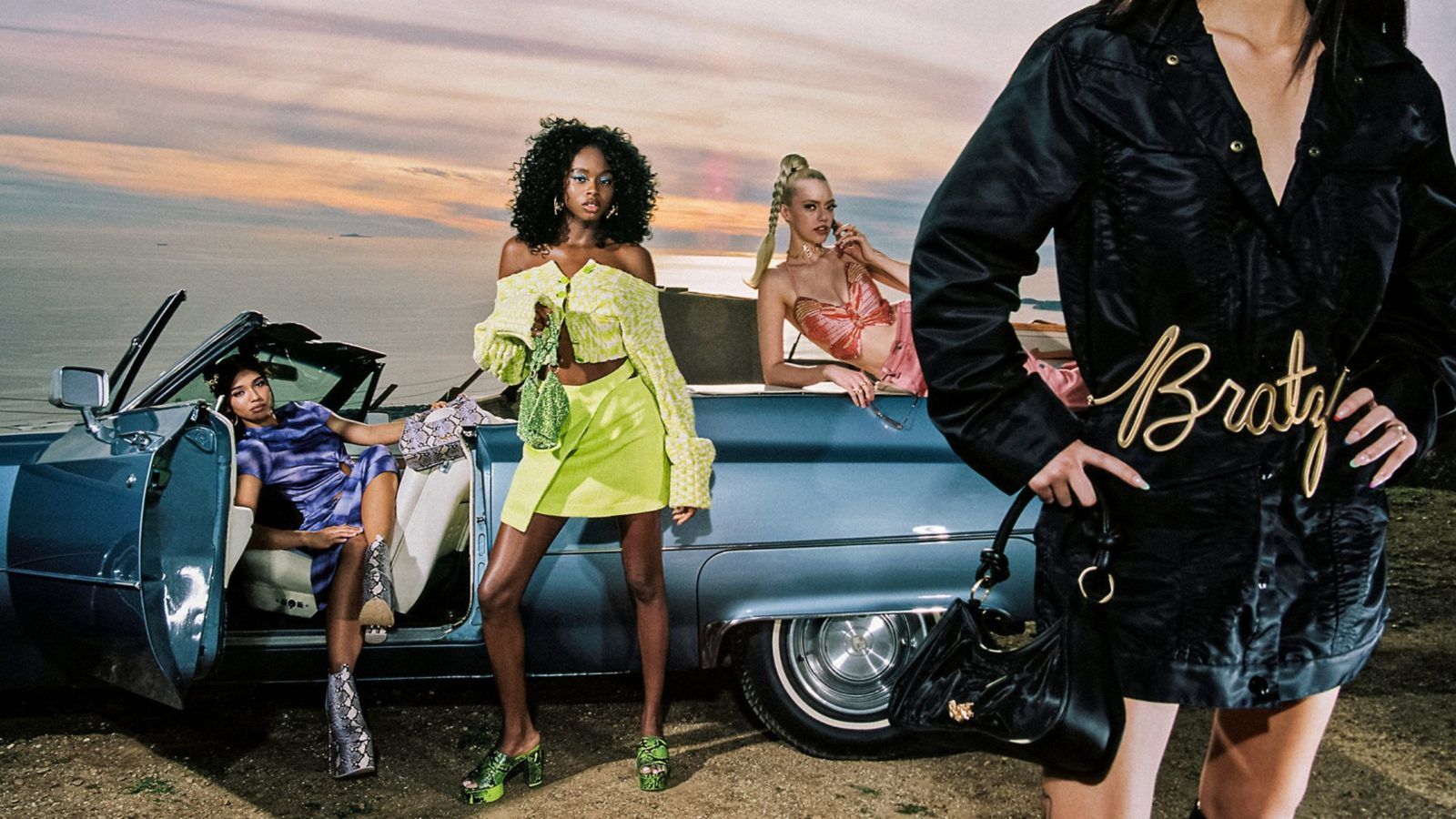 Call it an unfortunate consequence of our goldfish attention spans, call it the evils of late-stage capitalism or call it a pricey balm to whatever anxiety we think a FedEx delivery will fix, but there will always, always be something new to buy. Attention to Retail, should you choose to indulge, is a running list of the newest, coolest fashion launches to know; then, to add to cart. Sorry! Or you’re welcome. Whichever shoe fits.

For better or for worse, your Y2K-strewn fever dream — dripping in baby tees, lace-trimmed tanks, those tiny, mini UGGs and whatever else Devon Lee Carlson is wearing — just chugged a Red Bull and is going strong, with no real signs of wavering. Now, there are whispers of people wearing dresses over jeans like Ashley Tisdale on a Disney Channel red carpet, in which case, we must unionise. But ’til then, enjoy Paris Hilton’s most-obvious release: her own line of tracksuits, Cult Gaia and Bratz’s early aughts-fuelled collection and more just-released fashion drops.

You may also like…
Style
‘Lab Report: MARNI scribbles a colourful picture on these VEJA sneakers
Style
You Need This: Zara’s candy-pink slip dress (that went viral on TikTok)

If you had Bratz dolls growing up, this is going to make you feel ancient: Bratz is turning 21! Seeing as Cult Gaia’s founder Jasmin Larian was the character study behind OG Bratz Yasmin, this collaboration — which also marks CG’s 10th anniversary — feels a little like a homecoming; a celebration of It-girl style through the ages, which zeroes in on Y2K-fuelled references as something both nostalgic and extremely of-the-times. There are the butterflies; the python prints; the drop-charm accessories; the cut-outs; the mini-skirts; and, of course, the platform shoes. Wouldn’t be a Bratz doll without those extra few inches of stomping ground.

There’s a lot to love about graphic designer Naomi Otsu’s special print rendered for The North Face’s International Women’s Day capsule. From afar, the pattern colours a bright, foliage-filled vignette which, in itself, is a fun divergence from the stoic blacks and army greens so often staple to outdoor gear. A closer perusal will reveal Otsu’s stunning attention to detail in this cacophonous, Where’s Waldo-esque dedication to memories of outdoor adventures with her mother — and summers spent in Sweet Home, Oregon. Details like the little mushrooms. The blue bears peeking out from behind palm fronds. The spotted-wing butterflies. The winding curves of a stripy rattlesnake. A girl, red-cheeked and donning a The North Face puffer.

If Otsu’s print calls to you, it comes cast across The North Face’s VECTIV ESCAPE hiking shoe, the Windy Peak anorak and much, much more.

When you’re Paris Hilton, a silly slogan-printed T-shirt will not suffice when it comes to making merch that’s decisively on-brand. It’d be extremely, well, “not hot”, as Hilton herself would undoubtedly drawl. As someone who’s claimed to have “collected hundreds of tracksuits” and as the person responsible for making said tracksuits in-style, then out-of-style, then, a decade later, back-in-style, Paris Hilton is nothing if not consistent with her likes and one-liners. Other than a Sidekick cellphone or a tiny, tiny puppy, the only acceptable item that’d make sense as PH merch is, of course, an enthusiastically diamanté-studded velour tracksuit — preferably in bubblegum-pink. Because Y2K is here to stay. And Paris Hilton’s tracksuit line: officially a go.

ICYMI, the launch was a one-day-only limited-time teaser, so be sure to sign up for updates for the official launch later this year.

Every period-getting person would agree: nighttime is tough. Maybe you’re one of those people who slaps on an extra-long (but, often, never long enough) pad and hopes for the best. Maybe you’re a tampon stickler, who sets an alarm for a middle-of-the-night change. Engineered precisely for this tricky time of night when gravity is doing its best to ruin your nice, clean bedsheets, kiri™’s brand-new nightwear underwear (HK$328) — which has all the excellent, leakproof properties of its daytime predecessor but, now, holds 75ml of liquid instead of 50ml — is a wear-it-and-forget-it solution you’d be mad didn’t exist much, much earlier. This high-waisted, full-coverage pair is made with an extended padded section that now reaches all the way back towards the waistband, so you can twist and turn through your eight hours and still emerge from your REM cycle with no spotty surprises. A dream!

Another addition to the kiri™ rota is the Every Day bra (HK$280), crafted from the same super-soft, super-smooth fabric as the period-care brand’s underwear. Headlining with comfort top of mind (which, here, means no underwire and removable padding), kiri™ designed this bra for people who suffer from pre-period breast swelling or tenderness. Though, it feels so lovely you’ll probably want to wear it all other days of the month, too — not just those five to seven.

Following “Corned Beef” and “Glue” drops, Telfar releases yet another new colourway inspired by things some people take pleasure in consuming: “Mustard”. As with all new colourway releases, “Mustard” comes cast upon all three sizes of Shopping Bags — Small, Medium and Large — alongside the brand’s Logo Belt and Logo Embossed Hat.

If you’ve ever pulled on your SKIMS and thought it’s a shame it had to be worn underneath clothing, you’re in luck: the Kim Kardashain-led shapewear brand is branching out into swimwear this month. Slated to launch on 19 March midnight HKT, SKIMS SWIM is “a brand new category of game-changing swim solutions, designed for in and out of water,” consisting of 19 silhouettes in seven colourways, in sizes that range from XXS to 4X. Other than the usual suspects — triangle bikini tops and string-tied bottoms — some more interesting designs include a swim cycle suit (think unitard), a slinky swim skirt and several cut-out-strewn monokinis.

Start saving your favourites prior to the launch date here