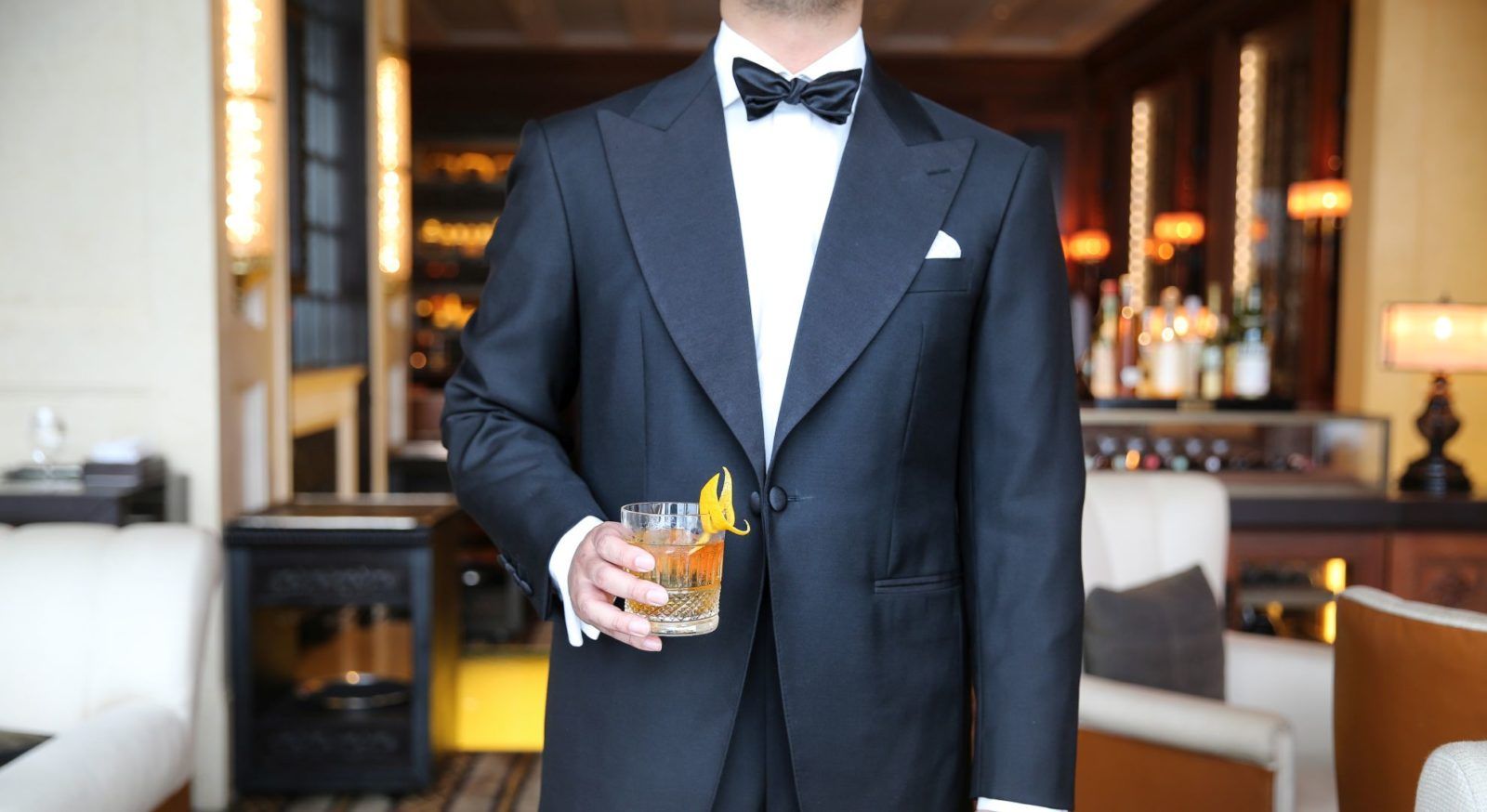 Ask any menswear enthusiast in Hong Kong for the city’s ‘best’ tailor, and you’re likely to hear the words “W.W. Chan”. For good reason too. Chan has long been a household name, originally situated in Tsim Sha Tsui before relocating a few years back to its current digs in Central’s Entertainment Building. Their legitimacy is grounded in the skill and craftsmanship of the legendary Shanghainese ‘Red Gang’ tailors — look out for the small ready-to-wear offering, marketed under the same name — and today, that gold standard is upheld by master tailor Patrick Chu.

Having combed through a veritable archive of previous commissions, the dinner suit — for our American readers, what’s commonly referred to as a tuxedo — stood out to me as a garment that excelled not only in make but also in design aspects (traditionalists usually only have a very finite number of flourishes they can add, since the style is meant to be low-key and draw attention to the wearer’s date).

Within the whole W.W. Chan eveningwear catalogue, the standout is the single button peak-lapelled tuxedo — a fantastical demonstration of the de facto house style. As is customary, Chu proposed a few different fabrics but himself advocated for Smith Woollens barathea: a robust mixture of Merino wool and kid mohair that was a far cry from the ‘Gangnam Style’ blues which have been quite trendy in recent years. The fabric’s stiffness was a telltale sign of superior body and drape, whereas the subtle sheen conferred by the mohair helped to elevate the whole commission’s sense of formality.

During our initial consultation, Chu made the seemingly obvious yet meaningful observation that the suit (as we know it today, at any rate) is not a garment native to the Cantonese diaspora. Its origins are of course inextricably linked to colonialism: when Europeans introduced the wider concept of Western clothing during the occupation of cities along the Pearl River Delta like modern-day Guangzhou and Hong Kong.

This led to his next point about the variation in regional styles: strictly speaking, W.W. Chan adopts neither a full English nor Italian cut for its house style; opting instead for a combination of both, based on whatever balance Chu finds to be the most aesthetically pleasing.

You might also like…
Style
Review: Bespoke ‘tobacco’ linen suit by The Anthology
Style
Our definitive guide to the best local tailors in Hong Kong

Though tradition is a cornerstone at W.W. Chan, it would be a mistake to generalise the house style as being conservative. Chu and the tailors who he has trained have a clear respect for the rules, but he still remains informed about newer artisans who are gaining traction internationally (in my conversations with him, he’s clearly familiar with the work of Milan-trained Japanese tailor Yuki Inoue). When our discussion shifts to the bespoke suit-in-progress, he puts particular emphasis on the ‘bellying’ (menswear speak for curvature) of the lapels: specifically, the point at which the curving would be most prominent.

That’s unlike a lot of Hong Kong’s so-called tailors, who’d simply ask whether you want a linearly curved or straight-cut lapel. It seems like a small point, but this distinction changes the jacket’s outlook significantly. Another detail which we discussed at length was the height of the gorge (basically the point at which the collar attaches to the lapel). While the gorge height can be extended at the client’s behest, a mid-to-low variation is Chu’s general preference when it comes to the W.W. Chan house style.

Old-school ‘prayer’ buttons come standard, meaning that the jacket can be fastened at the conventional buttoning point or even lower on the body — allowing for more room around the waist after a particularly substantial meal. The buttons typically come covered in the same material that’s used for the dinner jacket’s facings: in my case grosgrain with a matte finish.

Contrary to popular belief, the ‘basted’ fitting (i.e. the first appointment involving a garment) is for the tailor’s benefit as opposed to the client’s. After a minute or two of silent reflection, it was agreed that the seat of the trousers should be deepened, and that light roping in the shoulders be added in order to benefit the dinner suit’s overall balance. A week later, the ‘forward’ fitting went off without a hitch, and Chu made only very minor adjustments after a quick assessment with his well-trained eye. The smooth progress of the fittings meant that, incredibly, the final product was delivered three weeks from the first consultation — what amounts to record time for genuine bespoke.

Unlike many of the best-known French and Italian tailoring houses, the focus with this garment wasn’t to show off a surplus of high-level (but ultimately superfluous) hand-finishing techniques like pick-stitching or bar tacks. (Admittedly, these are sprinkled in but only wherever Chu deemed them appropriate). The true genius lies in the silhouette created by the artisans at W.W. Chan. To start, the dinner jacket possesses a strong masculine shape, largely due to the lightly padded shoulders and ever-so-slight roping in the sleeve head. The waist is gently nipped, for an effect that is subtle and flattering — about as far from the ‘vacuum sealed jacket on overworked torso’ look, popular with self-professed ‘men’s style consultants’, as one can get.

On jackets, a ventless back is inherently more challenging to tailor because it leaves less room for movement. For this reason, on conventional suits (bespoke or otherwise) the back is typically cut with a single or twinned vents. However, given that the sort of occasions which call for black tie aren’t usually very active — unless you count drunkenly dancing to Eagle Rock — tradition dictates that dinner jackets be cut ventless. Despite my large posterity, Chu insisted there wouldn’t be any issues. And the results, as you can see from the photos, are fantastic: the back drapes cleanly, while the length of the jacket extends neatly across the entire seat.

Even on its hanger, the leg of the trouser snakes back and forth in a gently curving ‘S’ shape, giving a distinct impression of three-dimensionality. One interesting ‘blink and you’ll miss it’ detail here is the coin pocket: a feature that is fairly standard on the waistband of suits or trouser separates. At Chu’s urging, we opted to omit it: on the basis that the shape of dinner trousers should be as unadorned as possible, so as not to disrupt the fastening of a cummerbund (whether or not it’s actually worn). While worn, the pleats help to give the trousers full, uninterrupted lines, which are pivotal to achieving the sort of clean and simple look that is emblematic of black tie.

Given its reputation, one always goes into W.W. Chan with high hopes. I’m glad to report that my expectations were met — even exceeded in some aspects — and that I can’t find anything to fault the final product. Just as well: at this price point, even small flaws can feel fatal.

A lawyer by training who moonlights as a fashion enthusiast, Alexander is a huge proponent of relaxed tailoring, in-the-cut sneakers and the meticulous tradition of Japanese workwear. A native Hongkonger who went to school in the U.K., he embraces a transatlantic lifestyle (minus the bewildering 1950s accent).

Style Menswear
Sign up for our newsletters to have the latest stories delivered straight to your inbox every week.