Riccardo Tisci may have just left his job at Givenchy, but that doesn’t mean he’s disappearing from the spotlight. Only a few days after announcing his departure from the iconic French label, the self-confessed sneakerhead has announced his second Dunk design with long-term collaborator Nike. 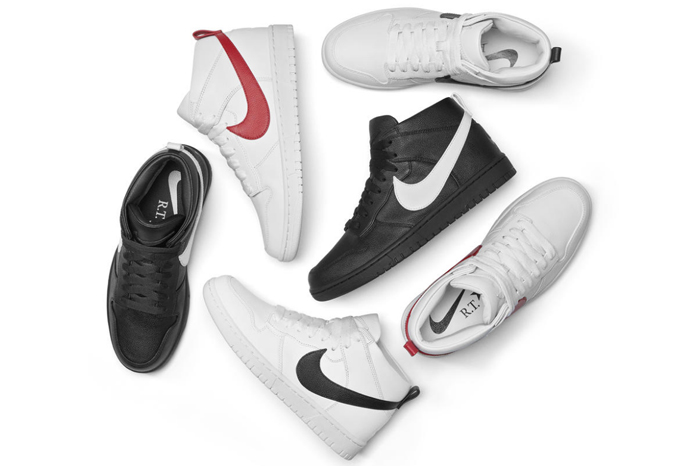 Named NikeLab Dunk Lux Chukka x RT, these new kicks come in both black/white and red/white colour schemes, with inspirations drawn from skate culture and retro-’80s-basketball aesthetics. Key features, meanwhile, include a mid-top silhouette and exaggerated proportions such as a larger-than-usual Swoosh across the side panels, enlarged foxing and eyestays, as well as a debossed ‘Nike RT’ logo on the heel. The shoe also retains a full-grain leather upper for durability, drop-in Lunarlon insole for ultra-soft cushioning, and memory foam in the quilted leather collar and tongue for a secure and comfortable fit. If the new design is not enough to make you want a pair, Tisci has requested the help of none other than model-of-the-moment, Bella Hadid, to star in the campaign. Posing along with the designer himself, the model dons a pair of the newly debuted Dunk Lux Chukkas while wearing only a sports bra.

The NikeLab Dunk Lux Chukka x RT will be released exclusively in various outlets in New York City on 10 February. For sneaker fans from Hong Kong and other parts of the world, the Dunk Lux Chukka will launch its global release at NikeLab retailers and online from 23 February. The price of these super-luxe dunks are yet to be confirmed, but we bet they’ll be popping up on the feet of fashionistas everywhere in no time.