The Royal Wedding: Find out who wore what to the biggest wedding of the year

Style
The Royal Wedding: Find out who wore what to the biggest wedding of the year
Share this article
Next article

After much long-awaited anticipation (along with plenty of gossip, scandals and unexpected last-minute adjustments), British royalty Prince Harry and American actress Meghan Markle’s wedding finally took place at Windsor Castle over the weekend. Like many others, we were most curious to see what the bride, and her celebrity guests, would be wearing to the wedding event of the year.

While many rumours pointed to Australia designer-duo Ralph and Russo as the creatives behind Meghan’s wedding dress, as it turns out, the job actually went to Clare Waight Keller at Givenchy, who created a sophisticated gown for the bride featuring a bateau neck, accompanied by the house’s iconic sleek lines and minimal cuts. The veil, meanwhile, was held in place by a diamond tiara that belonged to Queen Mary, and embroidered with distinctive florals of every county in the British Commonwealth, honouring the bride’s wish to have all 53 countries present at the beginning of this wonderful journey.

For the evening reception, the newly titled Duke of Sussex looked extra suave as he made his outfit change into a black tuxedo, while the Duchess went for a more flirty yet very elegant bespoke high-neck gown by Stella McCartney, styled with a pair of Cartier diamond earrings and custom silky white Aquazzura heels with blue soles. But that’s not the only ‘something blue’ for the occasion: The newlyweds headed to the reception venue in a silver blue Jaguar E-Type Concept Zero from 1968 (also a ‘something old’?), while the Duchess waved to the crowd with an emerald-cut aquamarine ring on her finger — a ‘something borrowed’ from the late Princess Diana.

Let’s not forget the couple’s star-studded guest list of celebrities from around the world, who all looked stylish and graceful as they made their way towards St George’s Chapel. One of the best dressed was the always impeccable-looking Amal Clooney, who looked ravishing in a custom Stella McCartney dress in yellow and a Philip Treacy headpiece in a matching colour. However, we think Clooney might have met her match when it comes to dressing for royal occasions, as Lady Kitty Spencer (model and niece of the late Prince Diana) was an absolute stunner arriving in a green Dolce & Gabbana dress and Philip Treacy fascinator, which she styled with a clutch and heels in a burnt orange colour, echoing beautifully with the printed florals on her dress.

Click ahead to see photos of the lovebirds, along with the best-dressed royals and celebrity guests at the Royal Wedding. 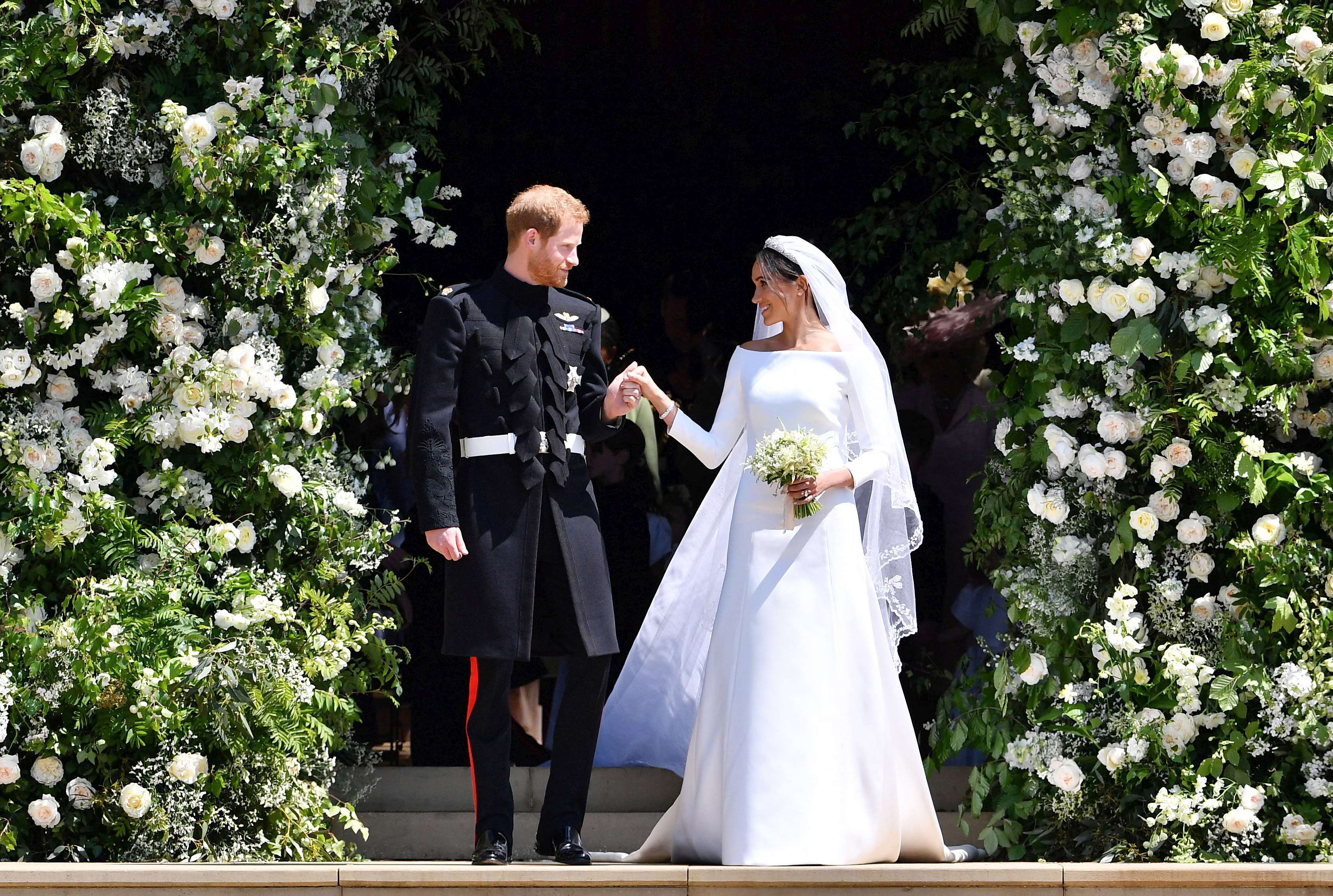 Though no longer in service, Prince Harry, with the Queen’s permission, was dressed in a frockcoat uniform of the British Army’s Blues and Royals, while Meghan Markle wore a custom couture gown from Givenchy. 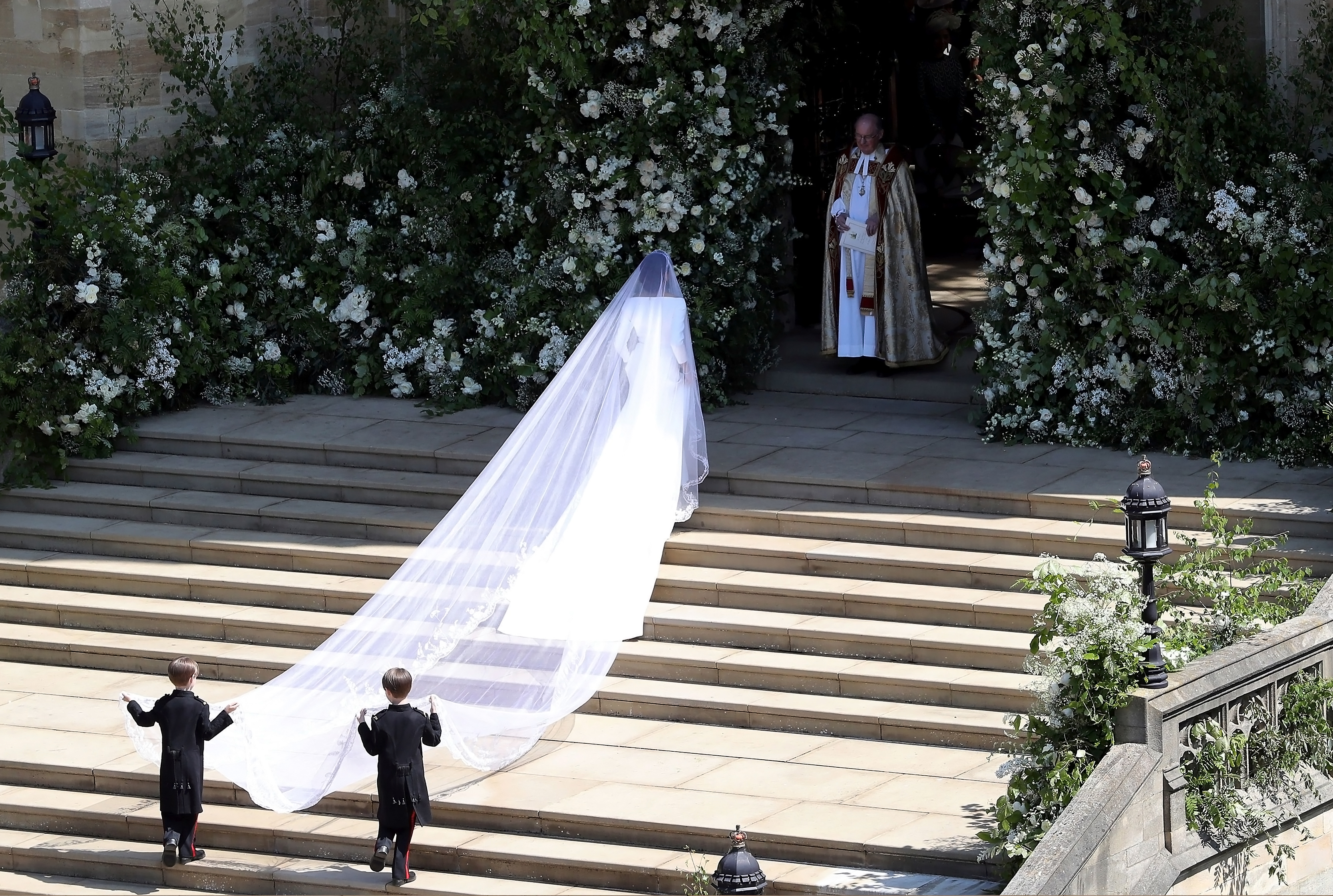 The veil, meanwhile, was embroidered with distinctive florals of every county in the British Commonwealth. For the evening reception, the newly titled Duke of Sussex changed into a black tuxedo, while the Duchess went for a bespoke high-neck gown by Stella McCartney. 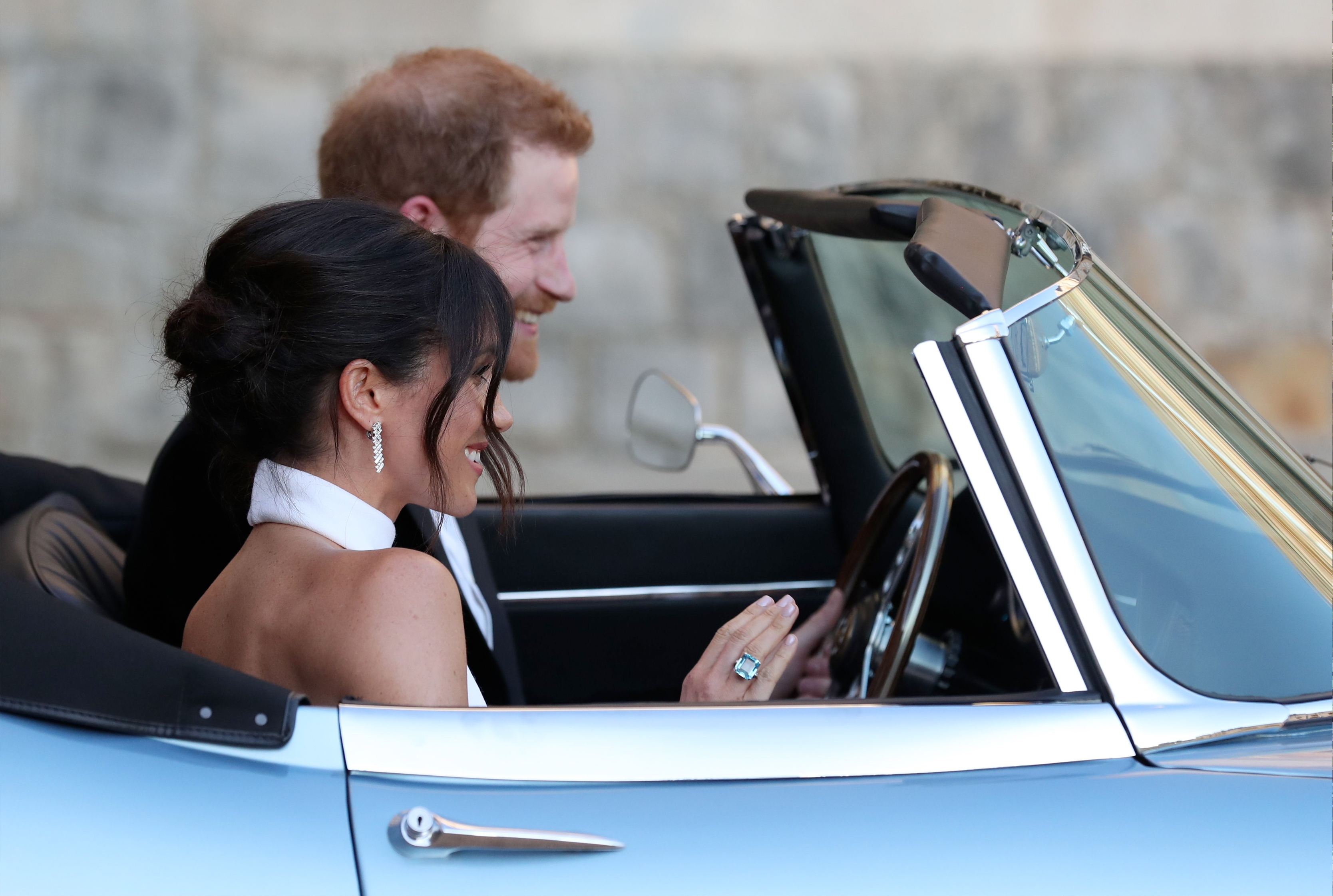 The newly titled Duchess of Sussex styled her second wedding dress with a pair of Cartier earrings, Aquazzura heels and an emerald-cut aquamarine ring that belonged to the late Princess Diana. 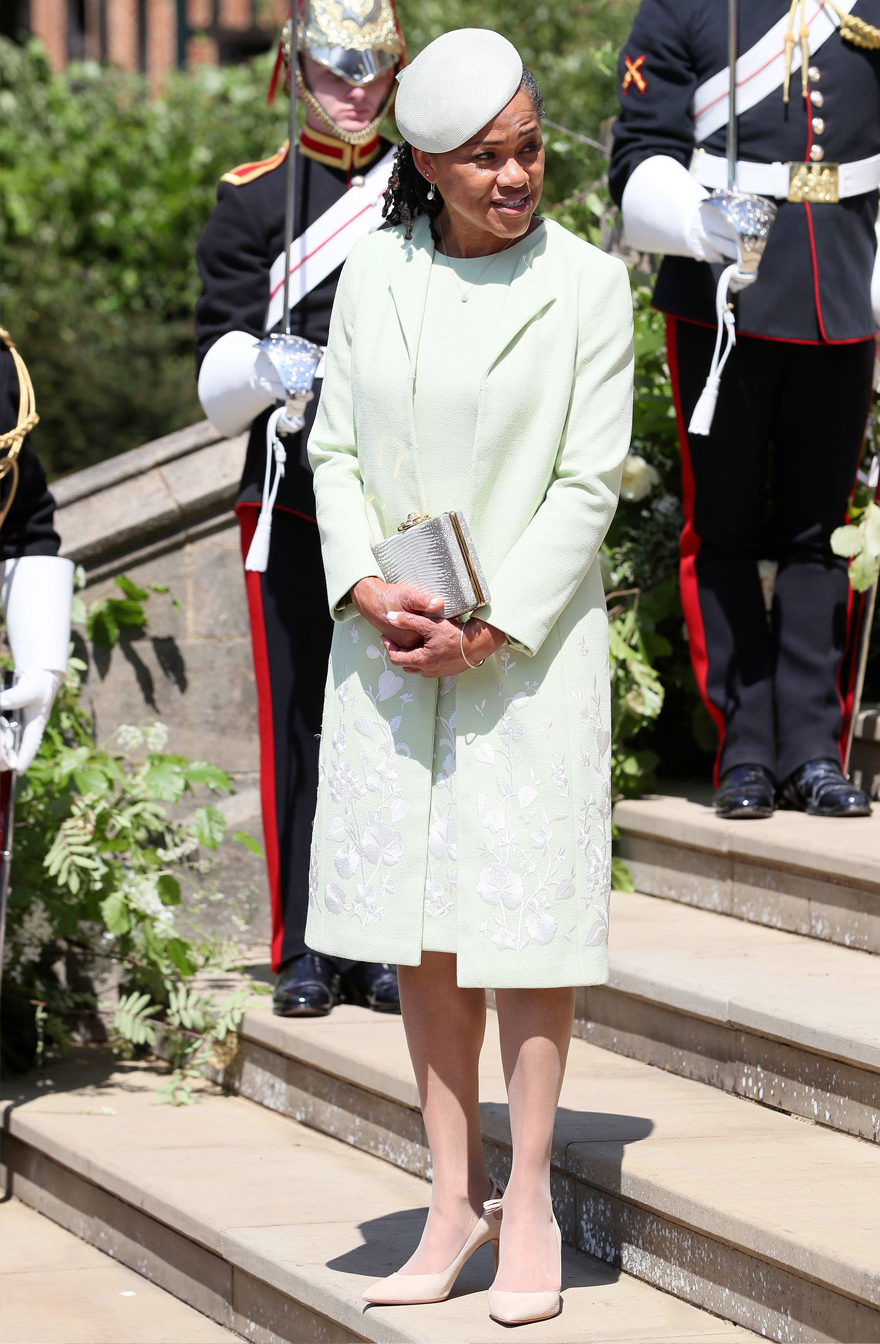 Lady Kitty Spencer, niece of the late Prince Diana, was dressed in a Dolce & Gabbana dress and fascinator from Philip Treacy. 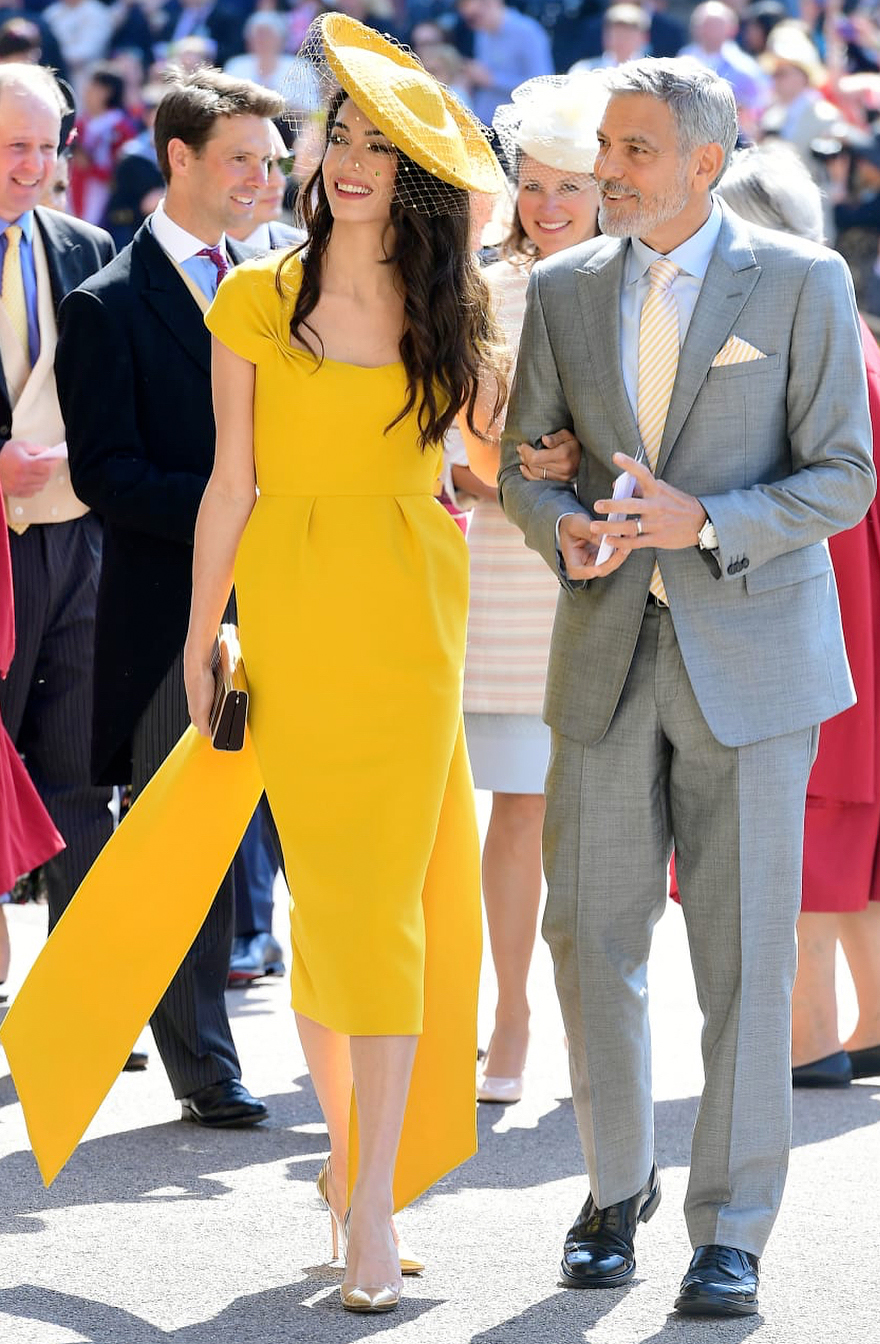 Victoria Beckham arrived with David Beckham in a custom dress of her own design and a fascinator from Philip Treacy. 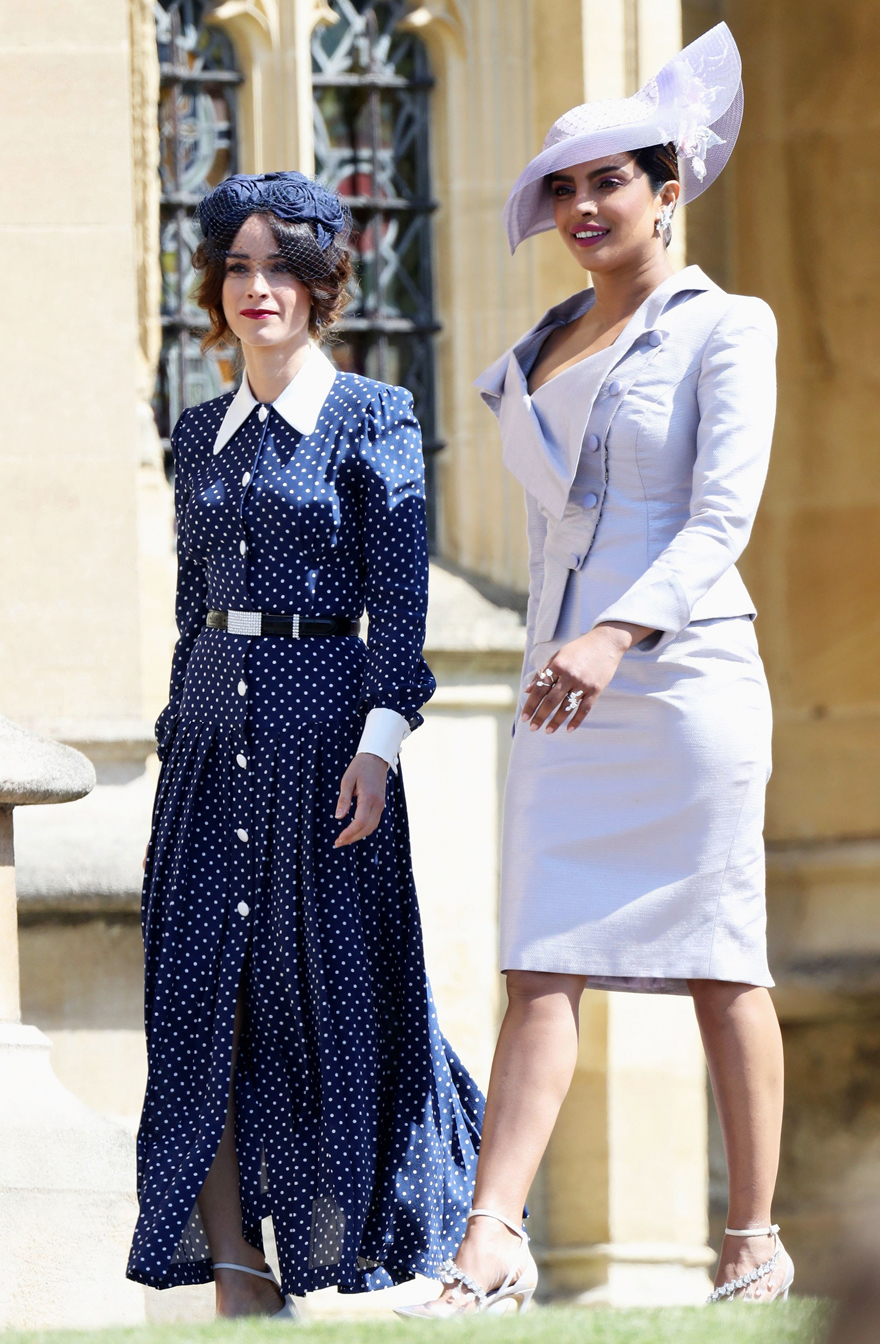 Priyanka Chopra (on the right) arrived with Abigail Spencer in custom Vivienne Westwood attire and a Philip Treacy hat. 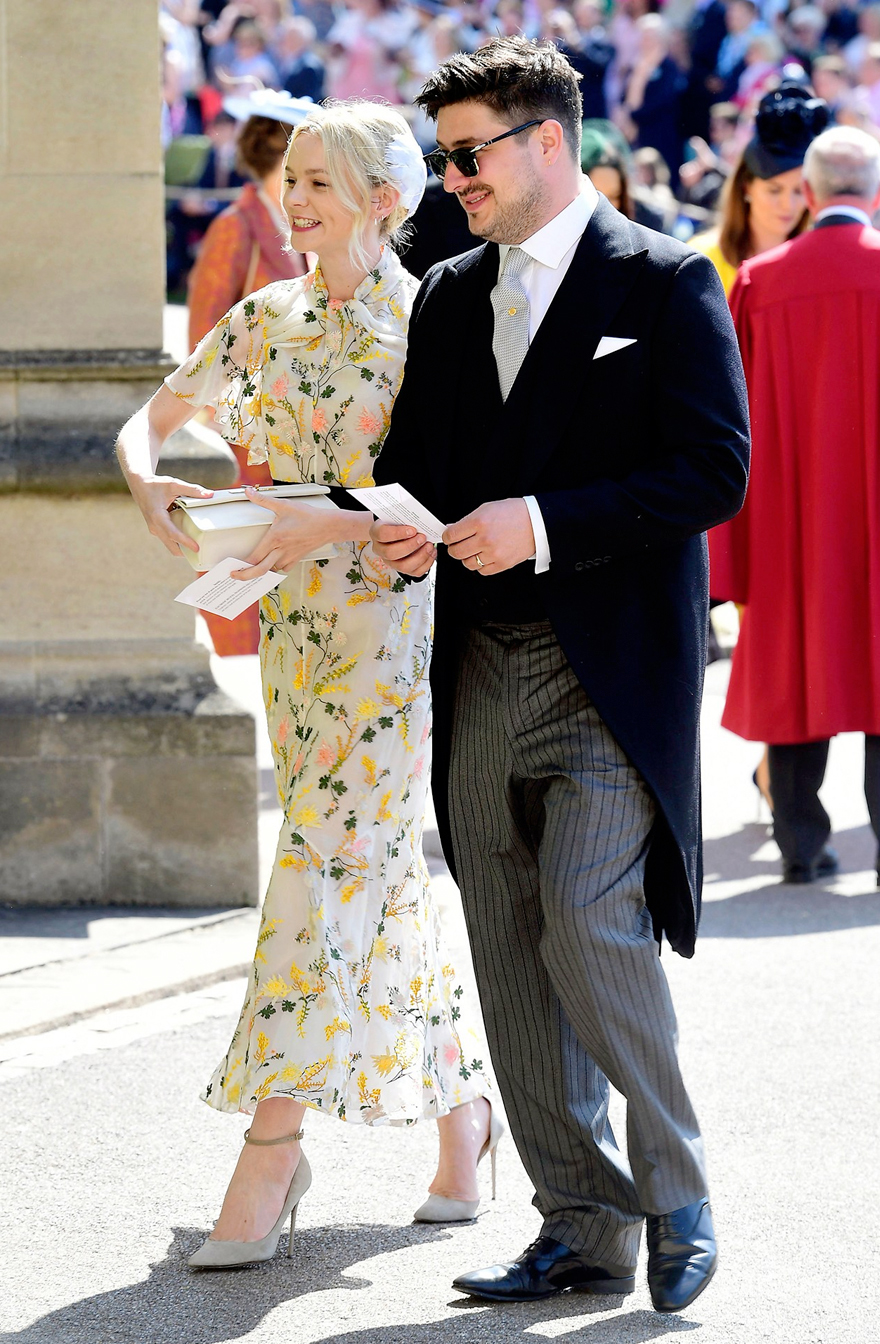 Carey Mulligan opted for a dress from Erdem’s Resort 2018 collection. Serena Williams went for a dress from Atelier Versace, styled with Bulgari jewels. 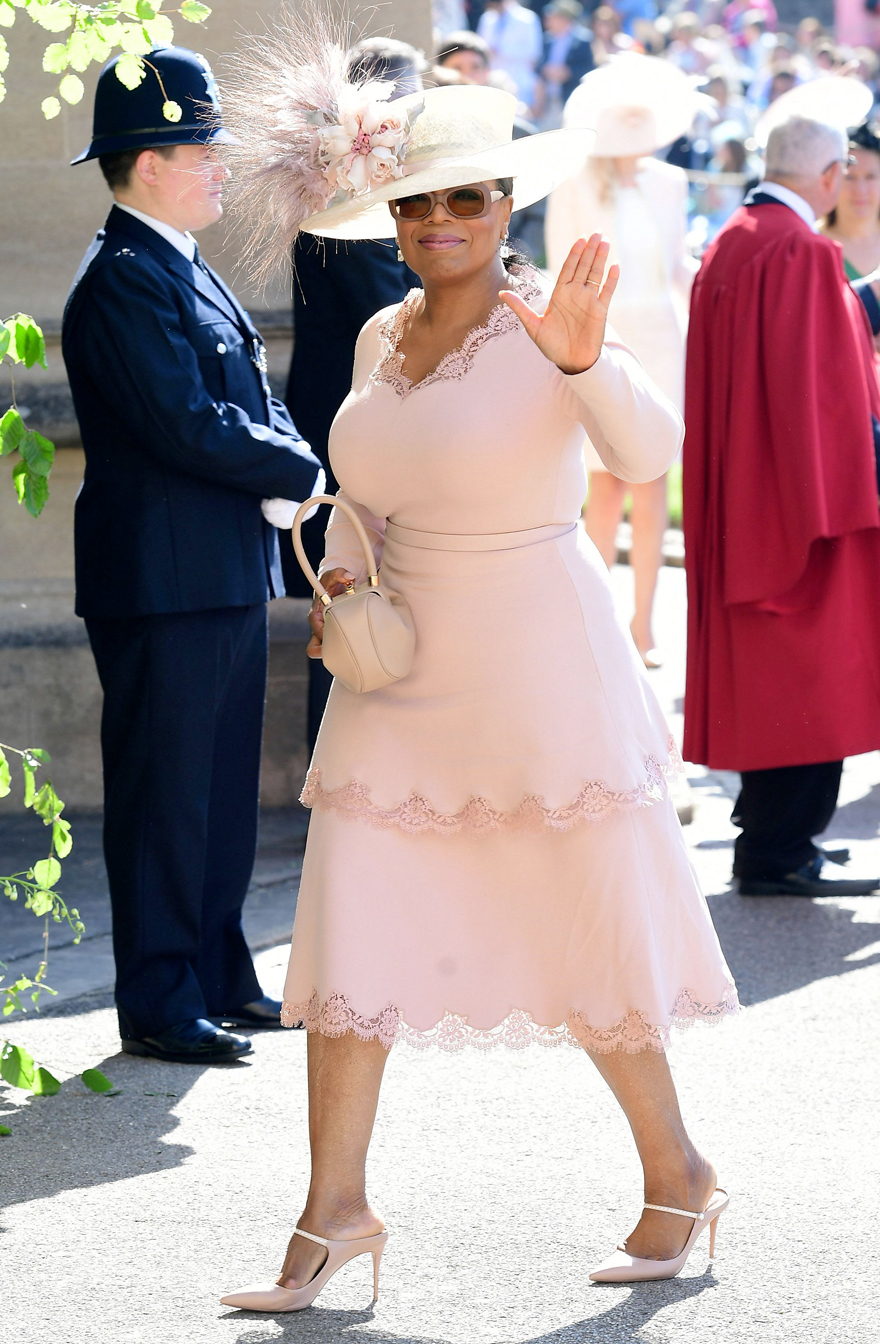 Oprah Winfrey, who had to make a last minute outfit change due to a colour error, arrived at the wedding in a custom Stella McCartney dress and Gabriela Hearst bag. 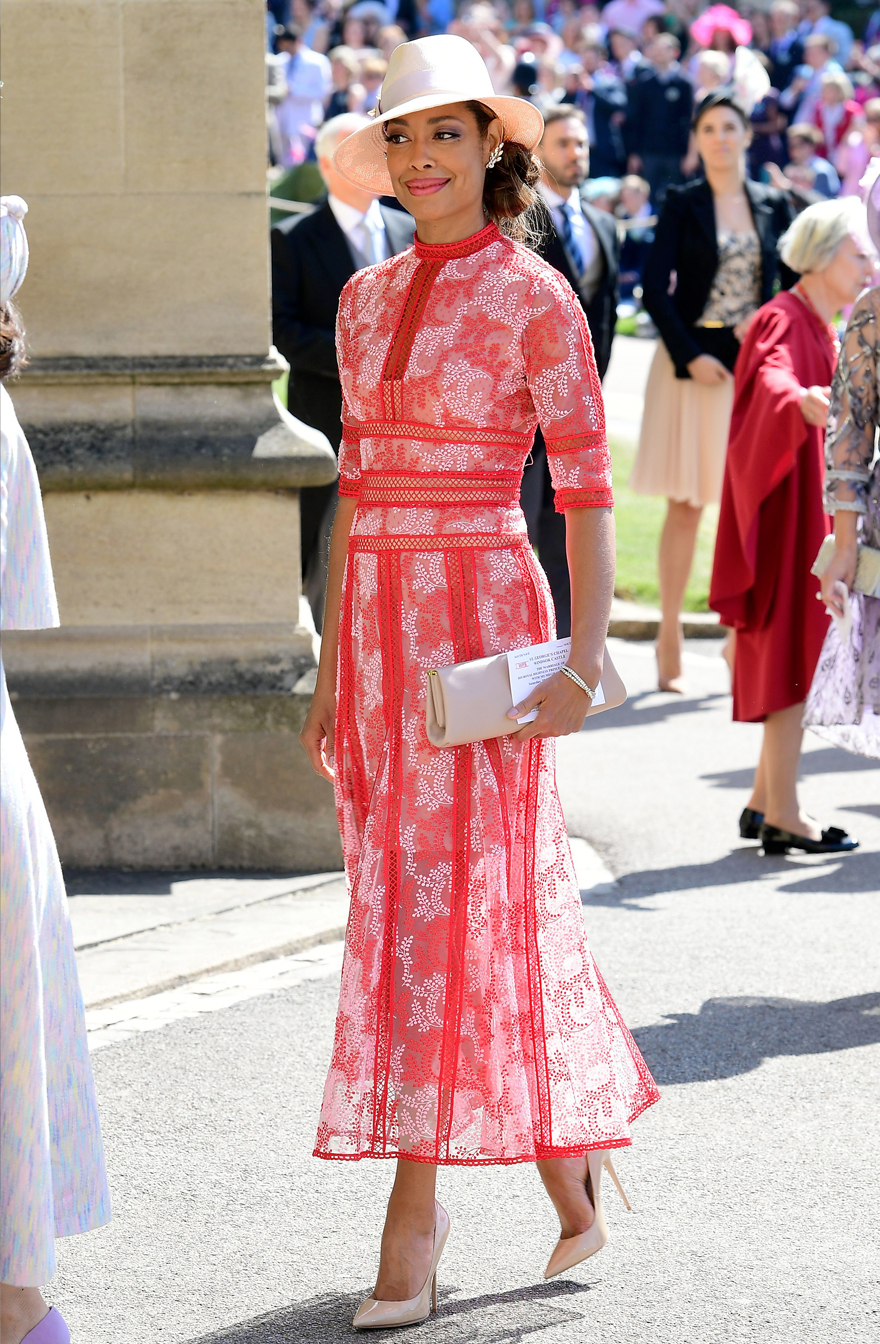 Gina Torres, the bride’s Suits costar, turned up in an eye-catching dress from Costarellos. 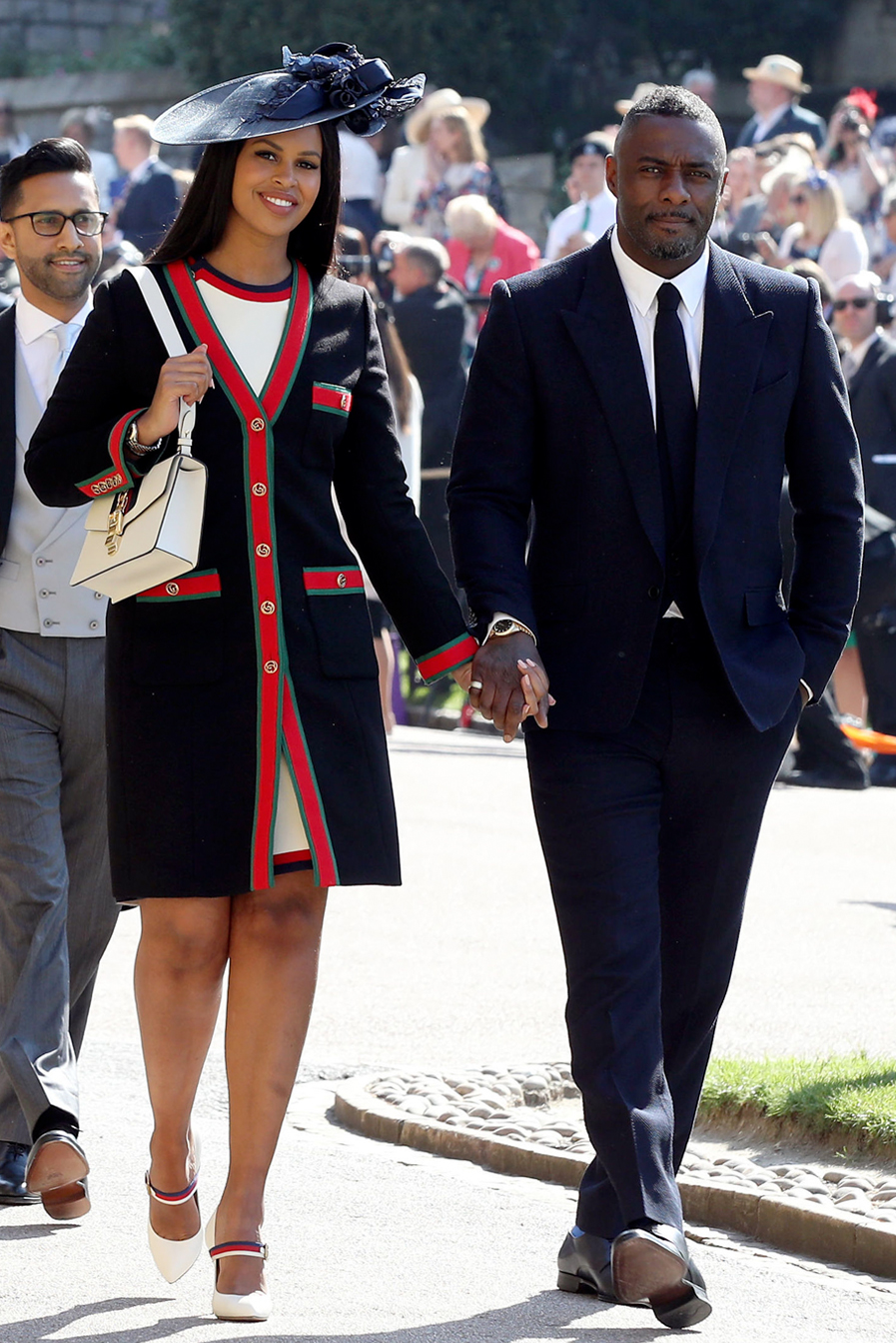 Sabrina Dhowre, model and the fiancée of Idris Elba, went for a dress and bag from Gucci.