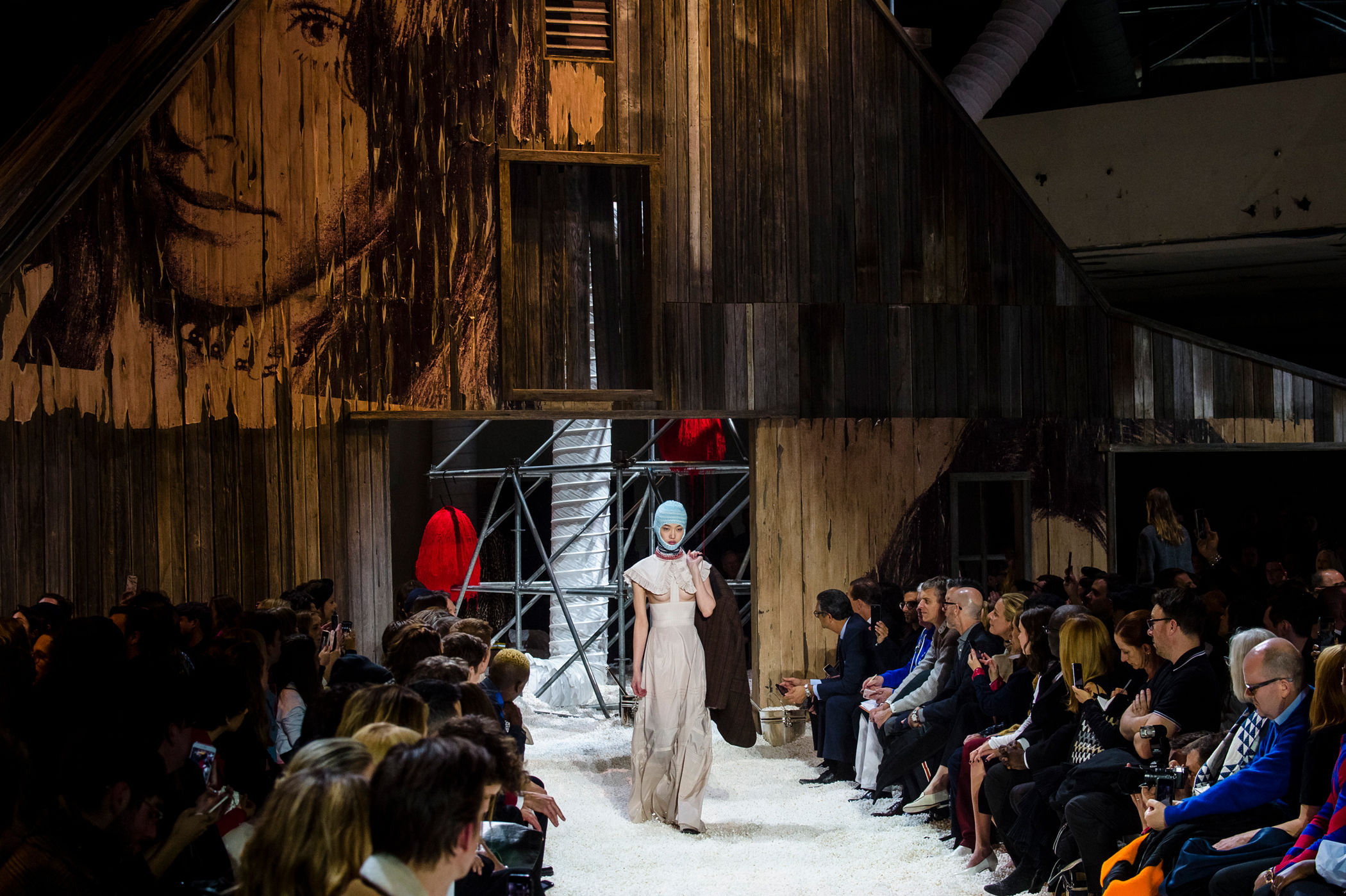 2018 is marked as the year where positive changes are bound to happen. Right from day one, the Time’s Up initiative made waves with its call-to-arms, women-centric manifesto, followed by sartorial and spoken statements through the highly publicised Golden Globes fete. And as if fate destined it, fashion month’s thrilling Fall 2018 edition — one that unabashedly celebrated womanhood — drew to a close merely a day shy of International Women’s Day.

From Raf Simons’ Calvin Klein preposition for a chic post-apocalypse way of dressing to Versace’s elevation of the female form, here, we look back at all the Fall 2018 clothes, sets and everything in between that made us sit up and stare. 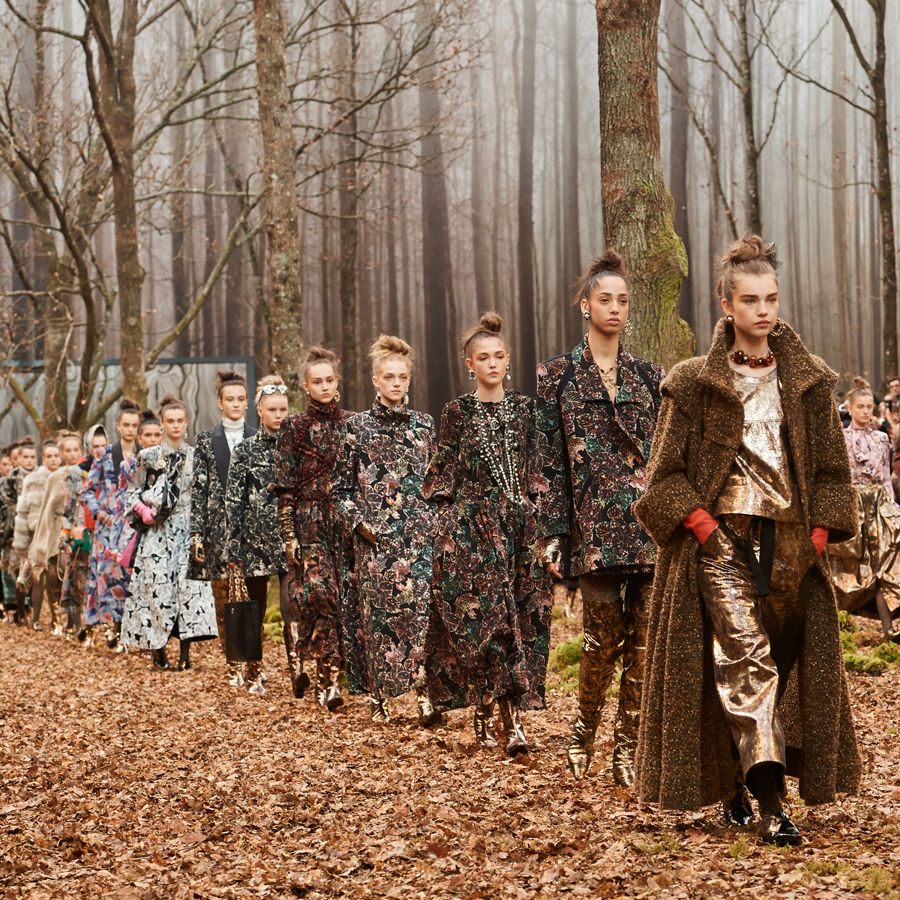 The venue: Karl Lagerfeld brought a forest into the Grand Palais. Its catwalk was lined with actual trees, moss and a carpet of fallen leaves, which crisply crunched underfoot. Meanwhile, the star-studded front row — Keira Knightley, Park Shin Hye, The xx’s Romy Croft — sat on benches of felled trees.

The collection: The equinox backdrop was telling for the assortment of sumptuous ankle-grazing, double-breasted outerwear that was to come. Tweed suits were sculpted with commandeering sharp shoulders, followed by gauzy brocade slip dresses and fingerless evening gloves — all tinged in a gradation of autumnal shades. 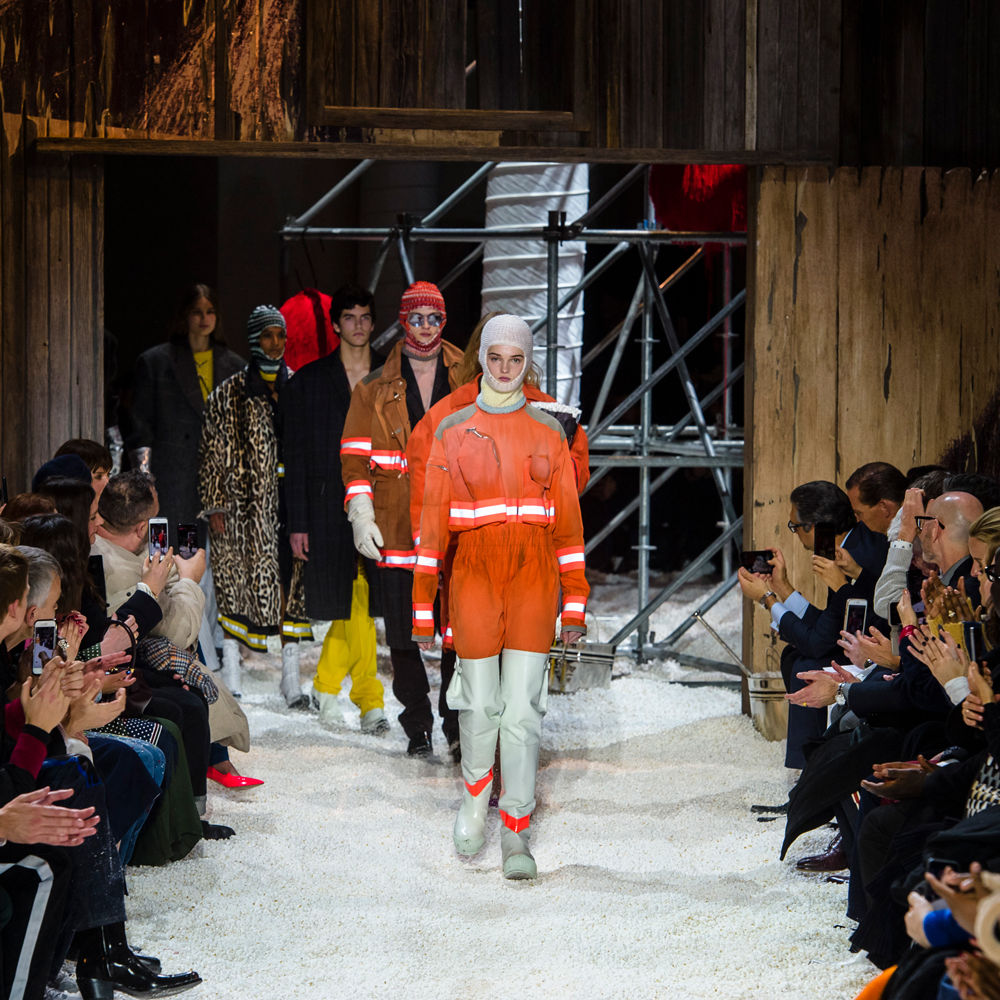 The venue: One level of the American Stock Exchange building became a dystopian farm setting brimming with popcorn.

The collection: In a not-so-subtle nod to the stormy political climate of America (or the world, really), Raf Simons proposed his fantastical protective-wear. Hazmat gear — dissected into full-body suits, boots, fireman coats — peppered his lineup of cut-out prairie dresses and rugged knitwear. Because, if an apocalypse is inevitable, we might as well face it with stylish grit.

Spotted: Balaclavas are the It-headgear for the cold climate. 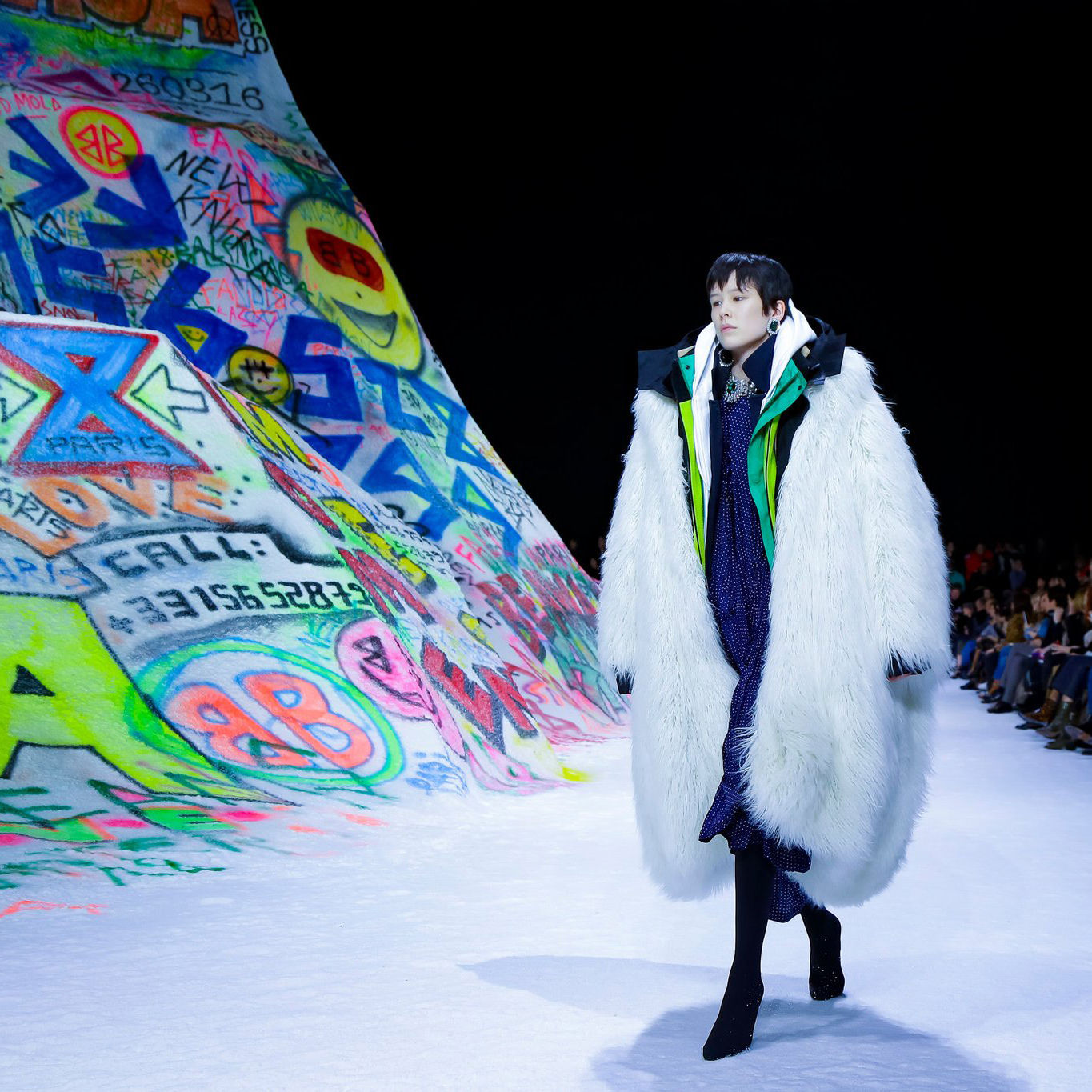 The venue: Studio 217, a hangar in the suburbs of Paris, hosted a graffitied white mountain. It took four weeks to build — “a snowboarding paradise”, as the show notes dubbed it.

The collection: The label’s first dual-gender runway featured a partnership with the World Food Programme via hoodies and fanny packs. There were 3D-printed velvety tops, and more protruding-hip blazers as seen from previous seasons. Demna Gvasalia also introduced us to OTT layering, spurring a tornado of memes involving Friends’ Chandler and an imaginary Luka Sabbat.

Spotted: Balenciaga’s hotline, emblazoned on shirts (looks 33 and 35), which you can call to hear a Balenciaga bot ask you 20 personal questions. Your prize for completing the survey? “Thank you… All data will be erased now.”

The collection: Designed with a post-human cyborg in mind, Alessandro Michele’s latest outing was an optimistic patchwork of references — from New York Yankees caps to Sikh turbans to sculptural headpieces inspired by Asian architecture. A Frankenstein of cultures, if you will.

Spotted: Aside from the Internet-breaking simulacrums and dragon pets, you might’ve missed look 67’s label-stitched clothes cover used as an added sheer layer. 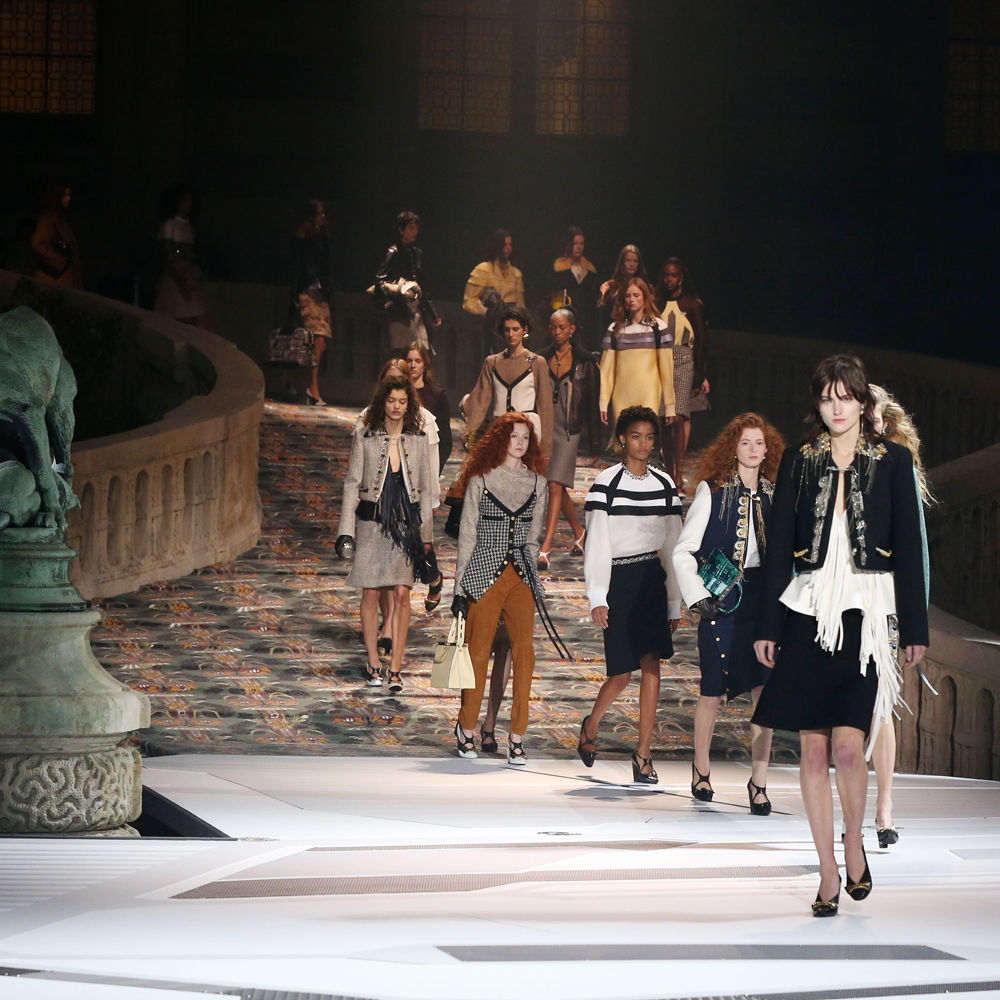 The venue: Louvre Museum’s Cour Lefuel, the courtyard designed for Napoleon III in the 1850s, had never been opened to the public — well, not until Louis Vuitton revamped what was once horse ramps into a Star Wars-echoing landing pad as its runway’s entry point.

The collection: Always showing on the last day of fashion month’s schedule, Nicolas Ghesquière never disappoints in delivering the final bang for burnt-out show-goers. His presentation took a futuristic turn, with its spaceship and epaulette-donning, corset-embracing troops. Albeit bringing in elements of periods past, futurism was also weaved in via sharp silhouettes and millennial-friendly hues.

Spotted: The mono-gloved oeuvre à la Michael Jackson, that was paraded throughout a majority of the looks. 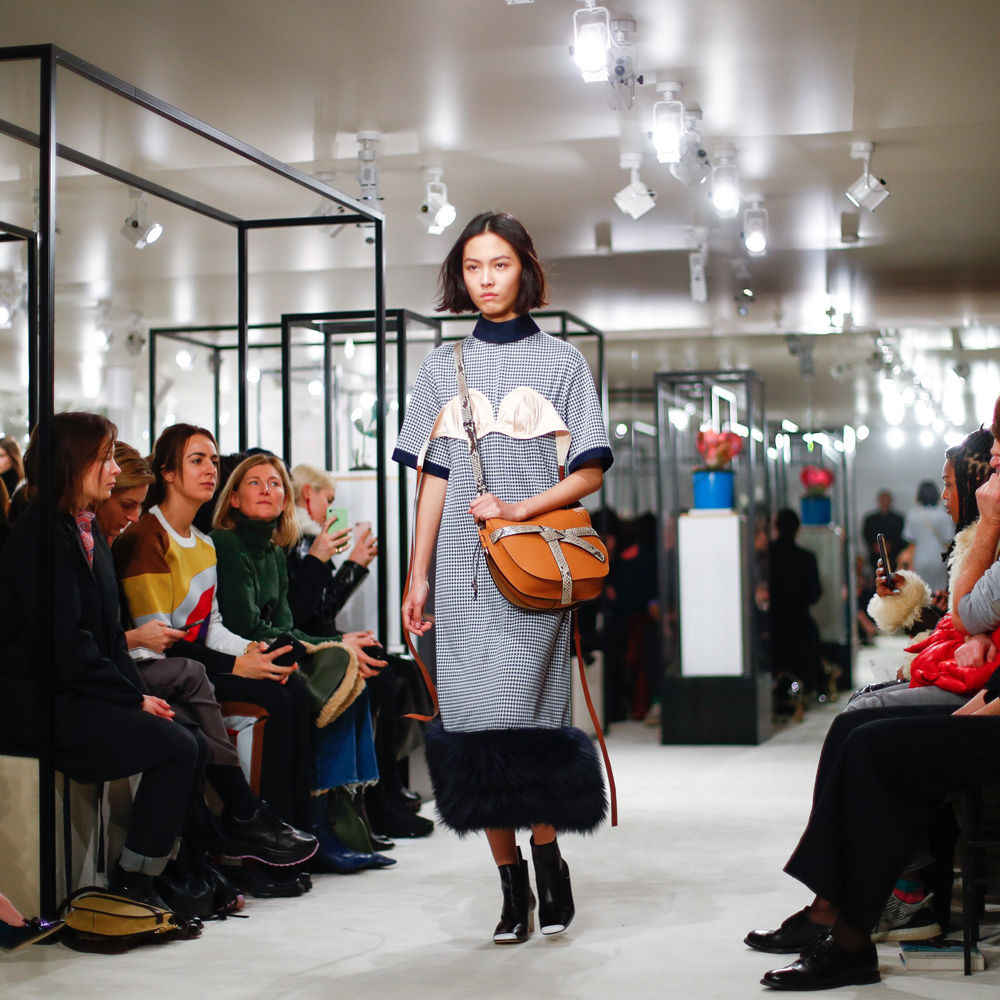 The venue: The usual UNESCO building, with one of the rooms set as a pared-back gallery.

The collection: Jonathan Anderson has perfected his winning formula for well thought-out, entirely wearable daywear. This season, it’s of fluid dresses, trenches and billowing pockets. And they couldn’t come at a much better time: Current industry conversations are abuzz with the question of who’s going to fill the gaping void of a Philo-less Céline, to cater to the Philophiles. Anderson’s Loewe can be just that.

Spotted: Unclasped, flyaway bras attached on dresses that you’ll ubiquitously see in the next six months. 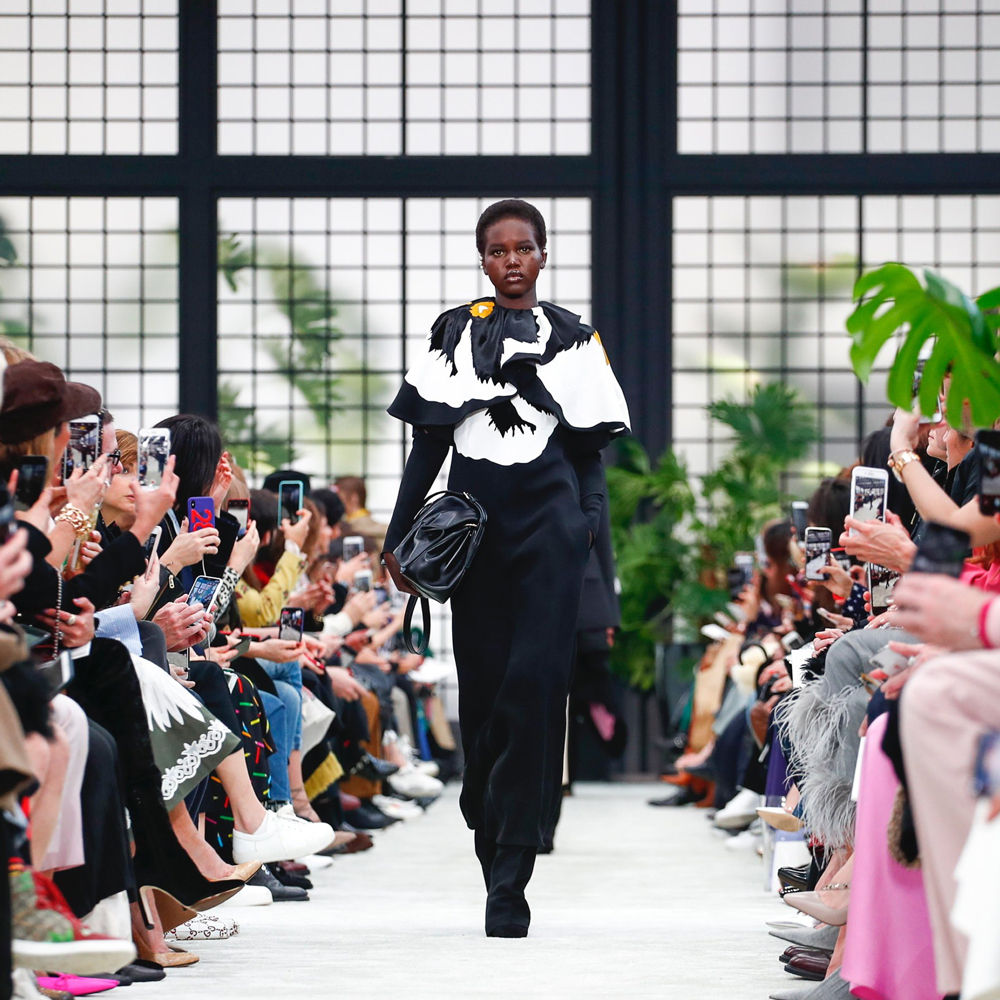 The collection: It was romanticism, as seen through Pierpaolo Piccioli’s discerning eye. Following a poetic couture presentation in January, Fall 2018’s ready-to-wear offering was a beautiful follow-up. Think: Blown-up florals on floor-length gowns or capes with silk headscarves aplenty.

Spotted: Mismatched earrings aren’t going anywhere. Other than everyone’s earlobes, that is. 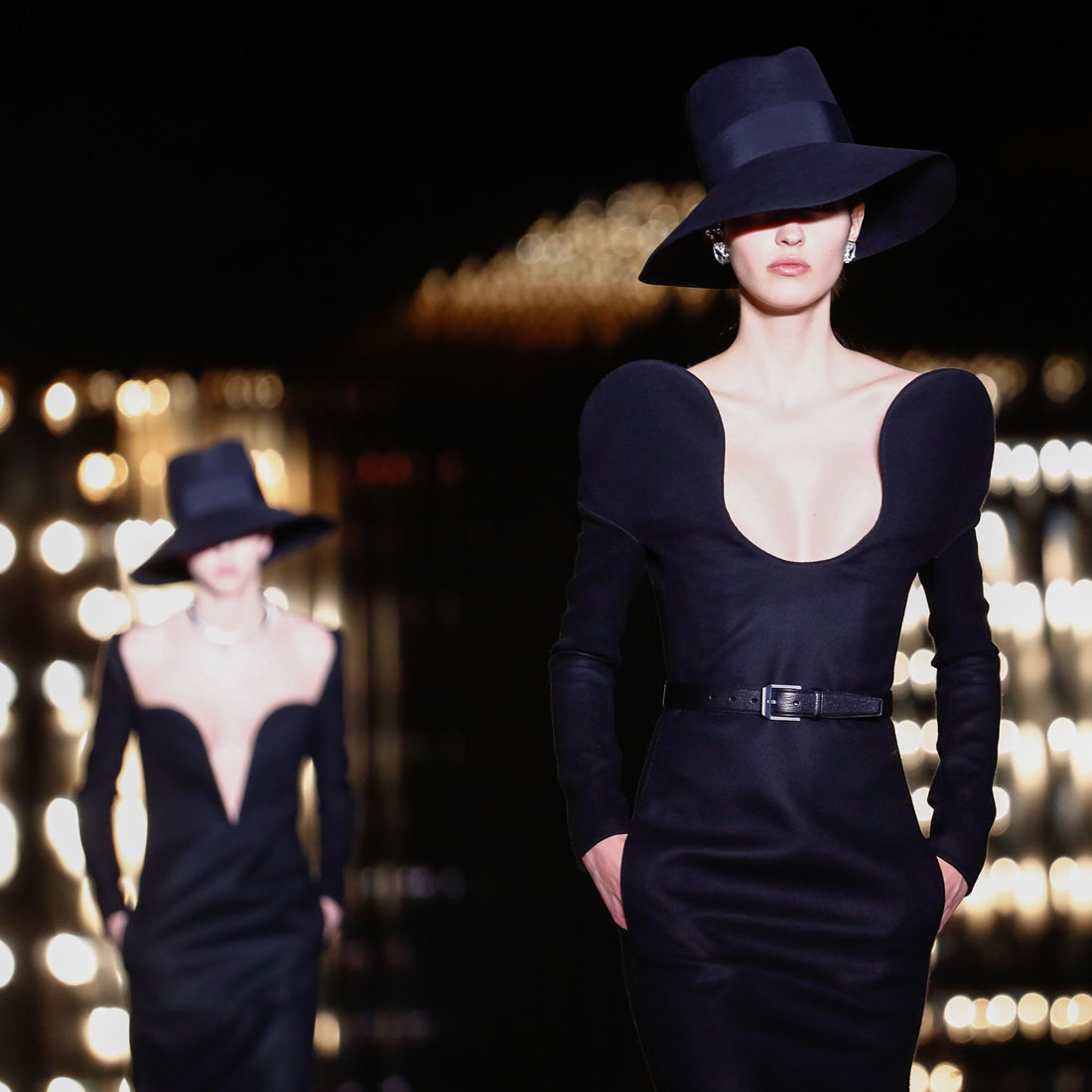 The venue: Opposite the glittering Eiffel Tower, very much like last season, but with a football field-size box speckled with strobe lights.

The collection: With his predecessor’s shadow – super-skinny cuts, rock ‘n’ roll pizzazz – still looming over him, Anthony Vaccarello has yet to come into his own. But he duly makes up for it with an ’80s va-va-voom that doesn’t slack on black leather and miles worth of bare legs in micro-shorts. 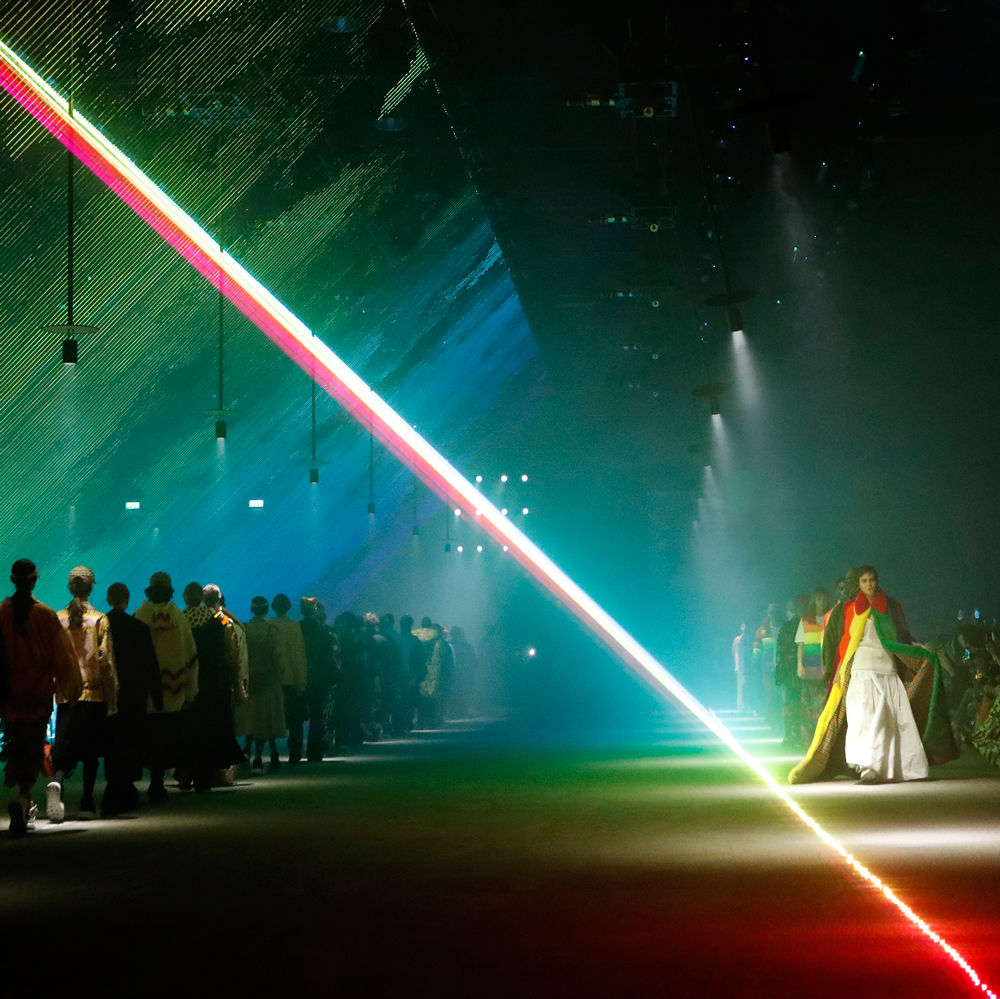 The venue: Christopher Bailey gave his last show his all. At Dimco Buildings, a spectrum of rainbow-coloured lights rivalled that of his collection.

The collection: A tribute to the LGBTQ+ community, Bailey’s swansong for the British house was a tongue-in-cheek revisitation of his first “fashion awakening” in a Yorkshire dive club chock-full of British teen tribes of the ’80s and ’90s: No-holds-barred print clashing to colourful baggy Burberry Prorsum tees to paint-spilled coats.

Spotted: Cara Delevingne’s return to the runway and the rainbow-dashed Burberry check. 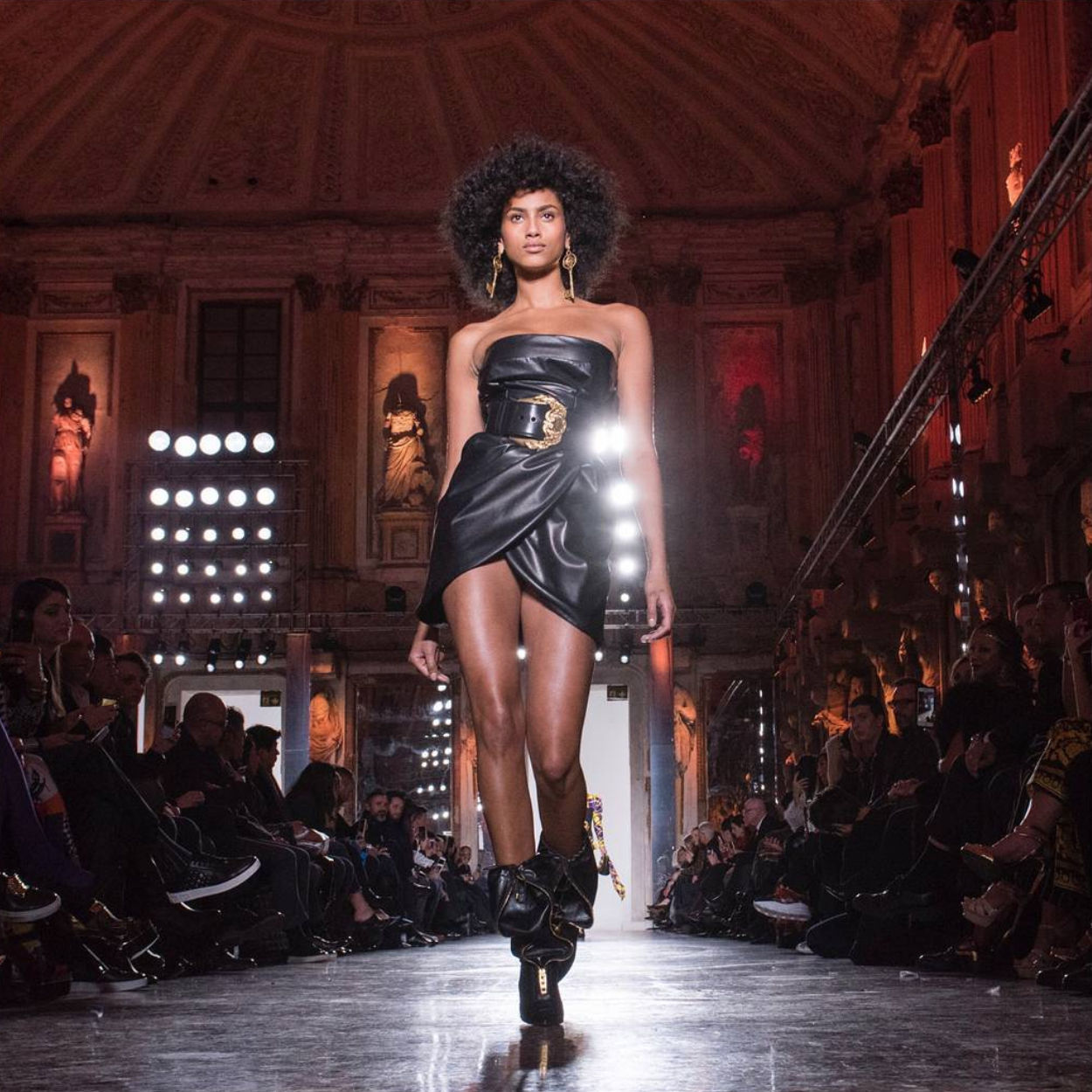 The venue: Swathed in Middle Age regality, the Royal Palace of Milan was an apt choice of stage.

The collection: It was almost an impossible feat to top off last season’s spectacular retrospective for Gianni Versace, yet Donatella delivered. Her elevation of the female body proffered something for everyone, from the skin-barer to the modest dresser. Waists were flatteringly cinched, but not too tight; fringes were here and there for swaying oomph; a chaos of more than three variegated plaids and prints was sophisticatedly fused in one look.

Spotted: Plaid school uniforms, much like Cher Horowitz’s in Clueless.