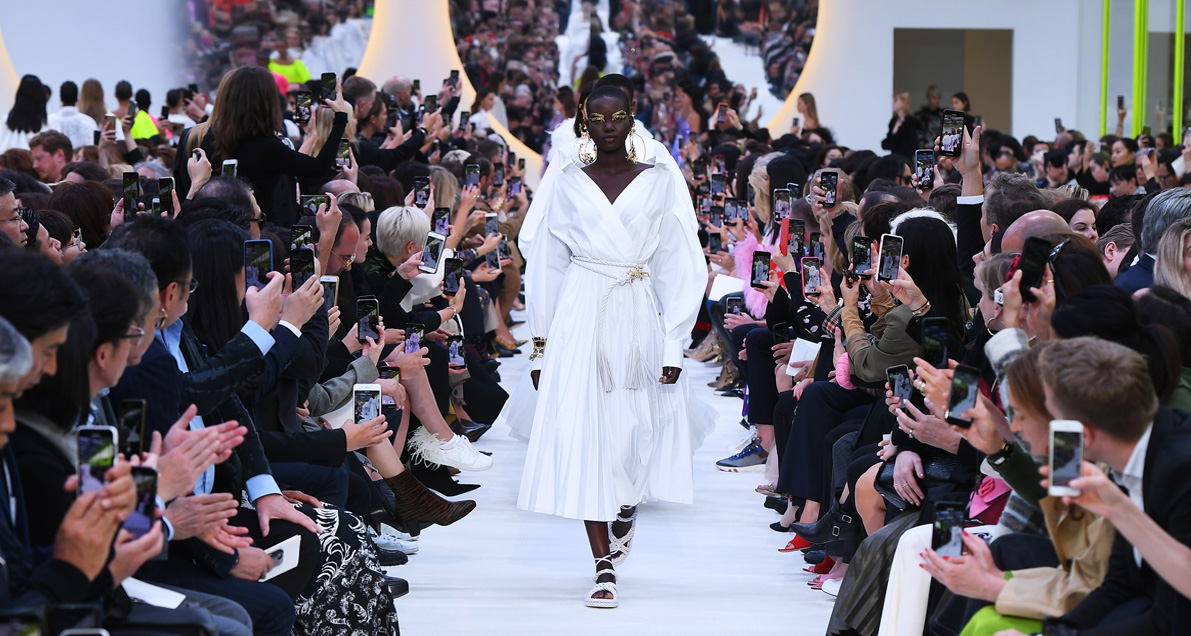 With ’90s streetwear and maximalism hitting what’s feeling like the point of saturation, fashion designers seem to have hit the pause button for a moment of reflection when designing for the SS20 season. Gucci’s Alessandro Michelle went on a creative reboot from his signature over-the-top aesthetics, while Prada departed from utilitarian story lines and, instead, revisited and beautifully reiterated its sophisticated house codes. At Valentino, Pierpaolo Piccioli has also taken a step back from his collaborative approach and, instead, embarked on a creative journey embracing a stripped-down approach to his typical bold-coloured designs.

Inspired by a 16th-century artistic technique called ‘grisaille’, where artists put focus on shapes and volumes in a painting by using only shades of grey, white and nothing more, Piccioli moved away from the eye-popping colours he’s so generously embraced in recent collections, leaving only the voluminous silhouettes and intricate details that, as the designer wrote in his program notes, “brings the attention from the dress per se to the personality that gives life to it, from object to the individual.”

The collection started off with a solid range of ‘purified’ universal basics from white shirts to pencil skirts, shirt dresses, wrap dresses and more, all presented with airy details, floppy shapes and voluminous proportions — from bishop sleeves to ruffles, feathers and transparencies — that elevated these ordinary staples into extraordinary pieces, sweeping us up with a couture-like sensuality and a ready-to-wear price tag.

Such purity and elegance was highlighted by the artisanal aesthetics found in jewels, shoes and accessories, and as the collection progressed, colours slowly slithered in. Bright, fluorescent shades of green, peach and pink appeared on light, silk georgette dresses, each flopping beautifully against the body. Later on the runway we saw bold fauvist prints inspired by the 19th century artist Henri Rousseau, featuring strong jungle-themed imagery presented in prints, intarsias and sequinned embroideries in a range of column gowns.

Even so, subtraction remains the core message of the collection, as the non-colour white is, in fact, a sum of all colours in the spectrum. Towards the last of the creations, Piccioli reverted back to white, coming back full circle. Take a look at some of the highlighted looks in Valentino’s SS20 collection below.