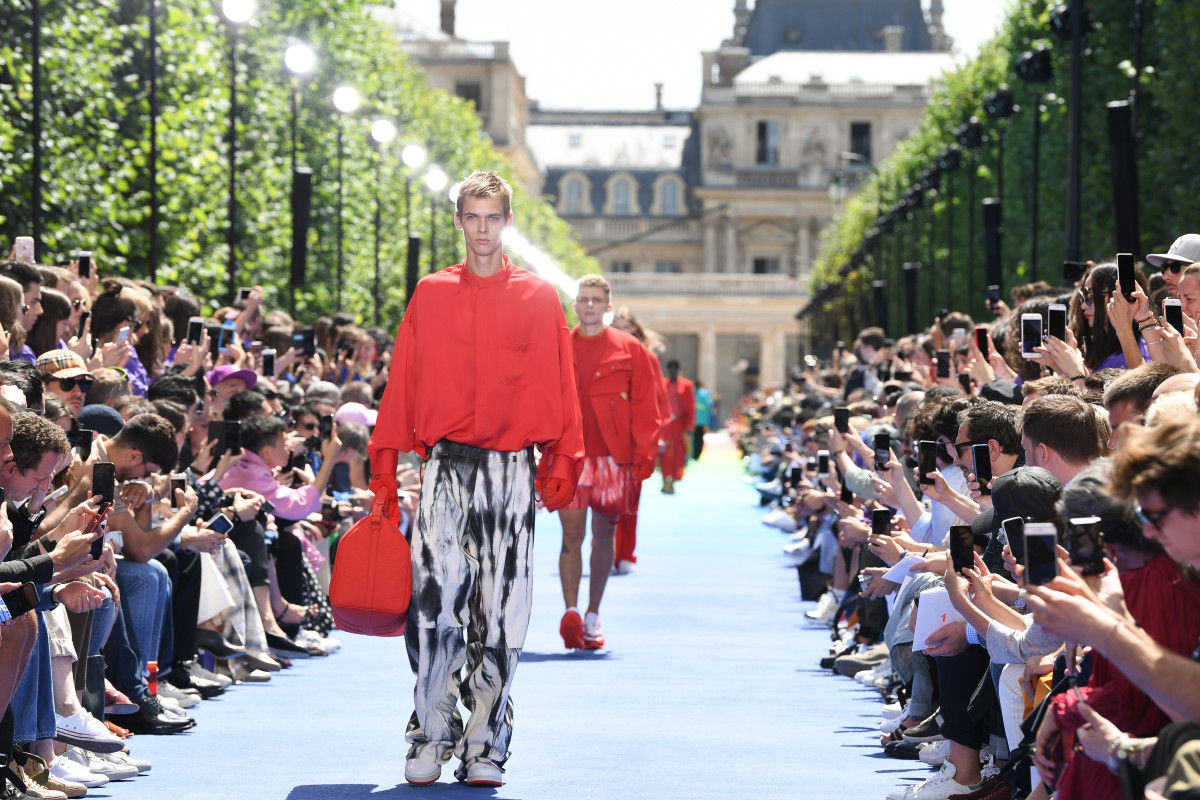 Ever since his appointment back in March 2018 as Louis Vuitton’s creative director for menswear, many have been wondering what Virgil Abloh has up his sleeve. Earlier today, Abloh finally debuts his highly anticipated menswear collection at the Louis Vuitton SS19 show with a few nods to his Off-White days, where he is still the head honcho.

Held at the Jardin du Palais-Royal, the show had many of Abloh’s posse at the end of the rainbow runway with the likes of Kanye West, Kim Kardashian, Takashi Murakami, A$AP Rocky, and Rihanna. Having recently concluded his very own Off-White SS19 show, Abloh’s very own take on the French fashion house Spring/Summer 2019 collection was nothing too out of the ordinary for the 38-year old creative director.

Featuring a 56-piece runway, the show kick-started a movement of tailored, all-white outfits, ranging from dress shirts to jackets, hoodies, and loose-fitting slacks. Abloh also added a dash of colour to the all-white sneakers with lime yellow laces, paying homage to his previous sneaker collaboration with Nike.

The sequence of events led to a slew of colourful collections with the use of utility vests, mohair sweaters, hoodies, and bomber jackets. Accessories also played a big part in the show with many models carrying bags of various sizes. From duffel bags to waist pouches and utility belts, even transparent holdalls were present during the runway.

With LV’s signature monogram look barely making the cut, this shows that Abloh is slowly breaking away from the monogram-heavy usage that is LV by focusing primary on colour blocking and gradients. While LV’s use of graphics has only ever appeared on its bags (picture Takashi Murakami circa early 2000’s), Abloh did feature two graphic-heavy sweaters.

The tie-dyed, floral pieces pay homage to the Wizard of Oz, which turned out to be a collaboration with Warner Bros. in conjunction with the iconic film’s 80th anniversary.

Among the assemblage of models gracing the rainbow runway, one can pick out the obvious homage Abloh pays to the world of skating and rap, featuring the likes of Kid Cudi and A$AP Nast. Playboi Carti also makes an appearance as he closed out the show with a holographic poncho and bag to match.

Towards the end of the show, Abloh walked the runway to a chorus of applause and cheers from the crowd. What made it all the more memorable was his emotional embrace with Kanye West, who he shared an internship with at Fendi back in 2009. 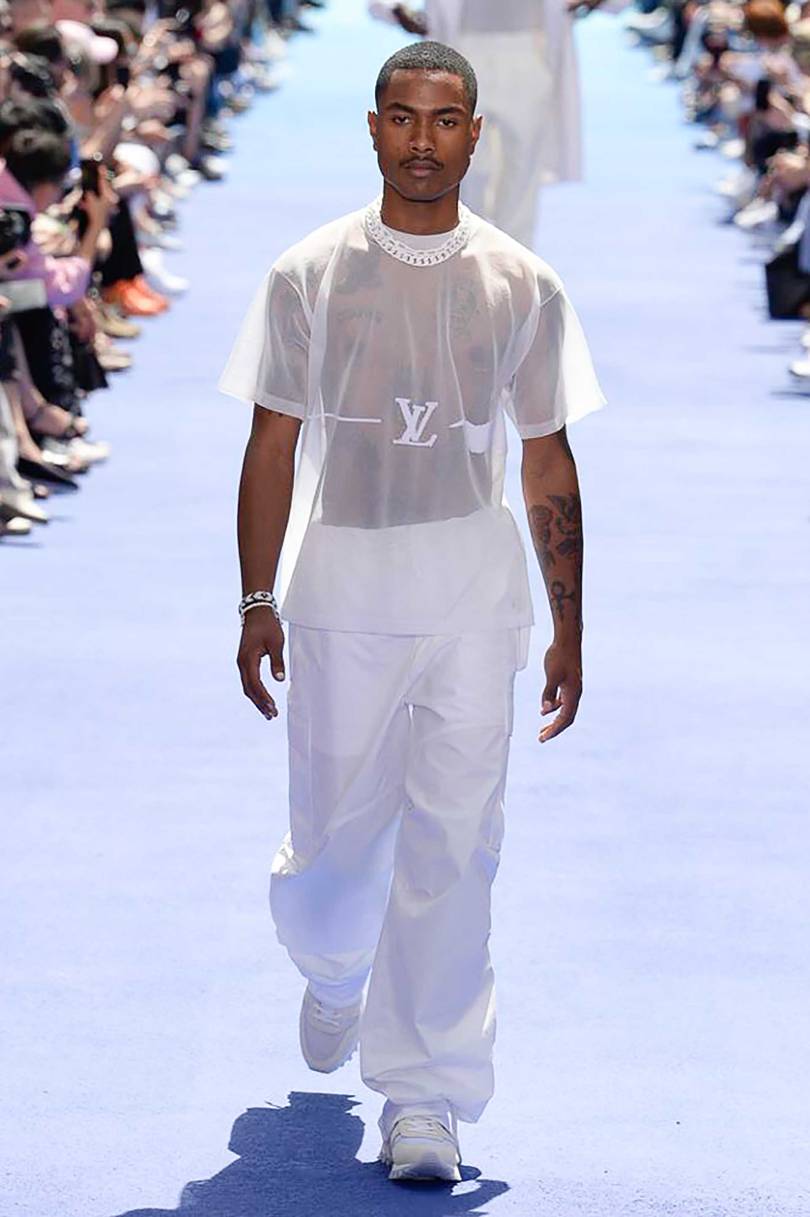 All-white outfits played an integral part in the show. 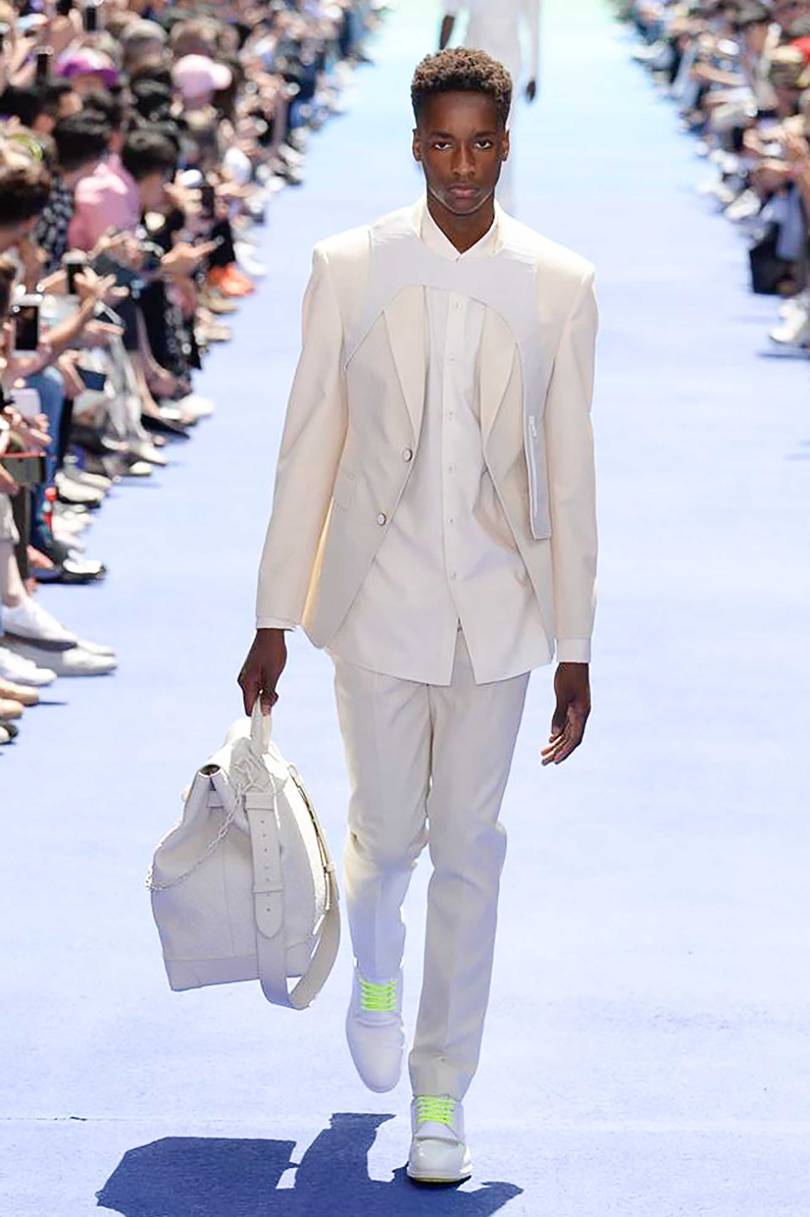 An all-white outfit paired with lime-yellow laces on Oxford shoes. 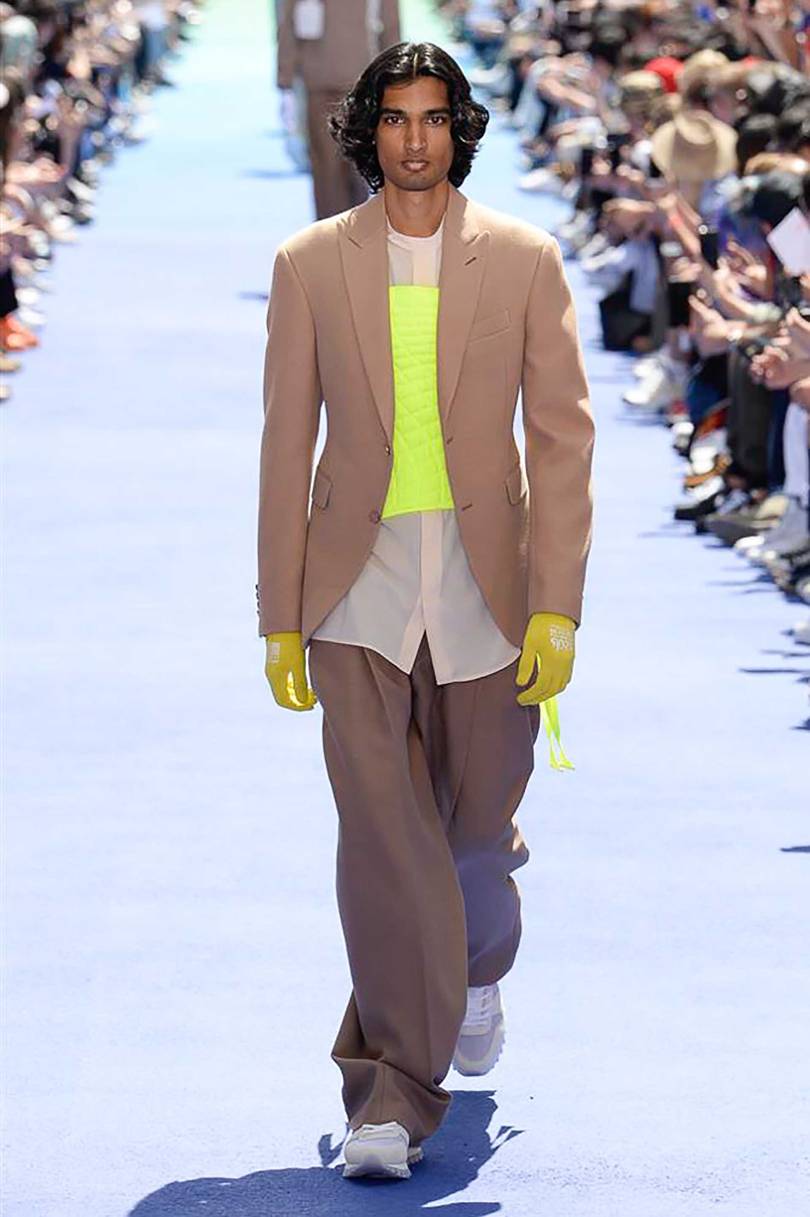 A pop of neon on a soft and subtle silhouette. 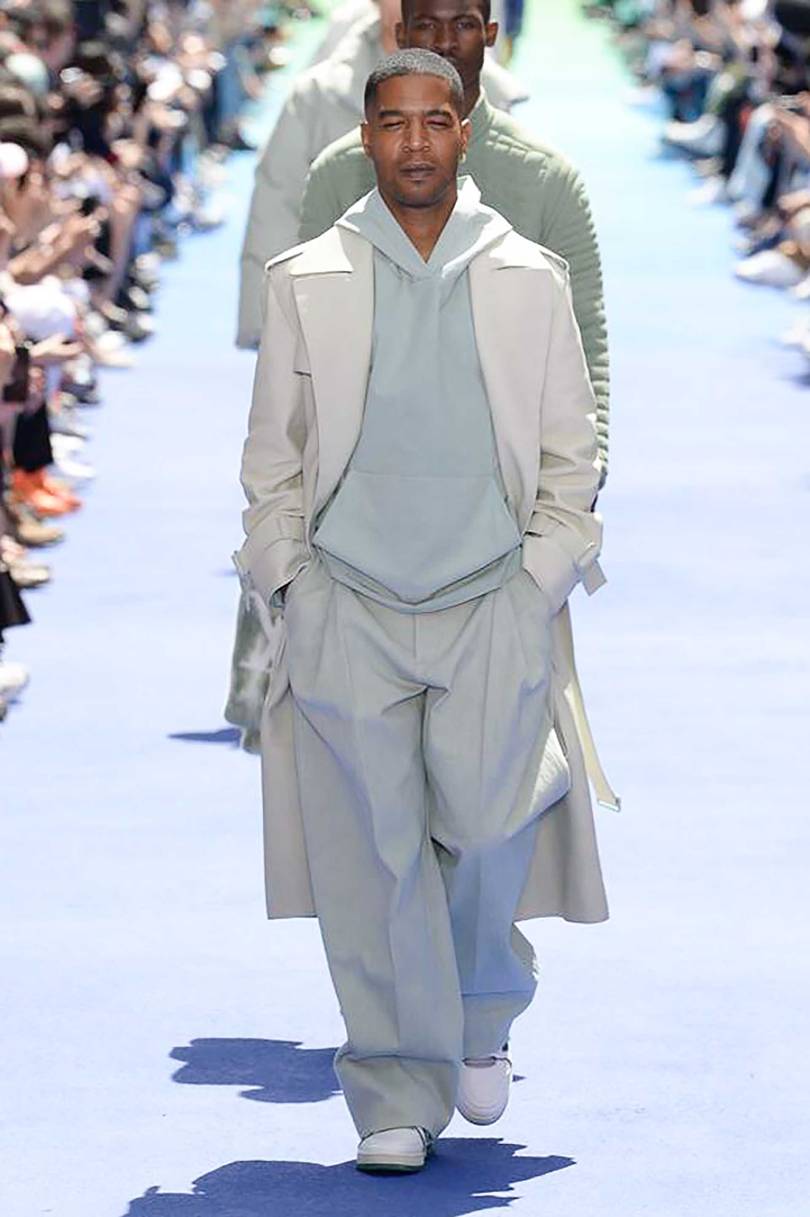 Kid Cudi graces the walkway in a washed green hoodie, a tailored jacket, and loose-fitted trousers. 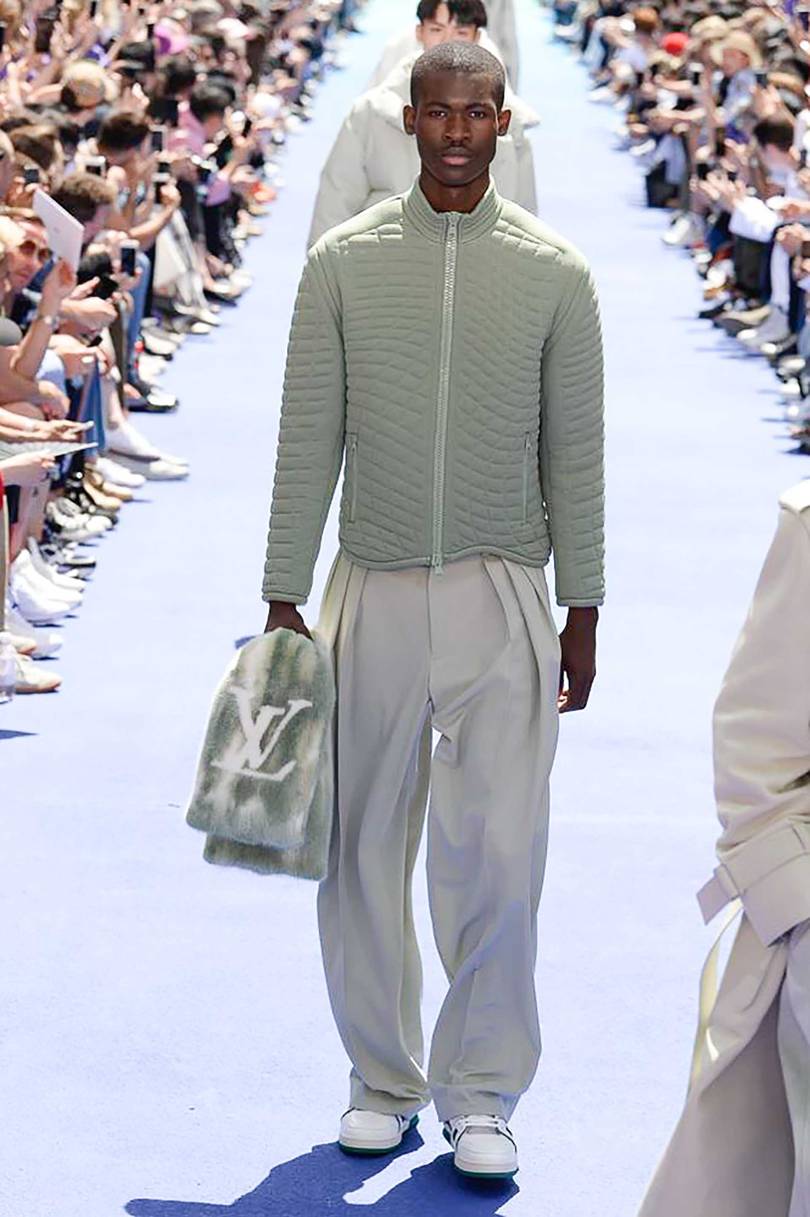 A neoprene jacket over pleated pants. 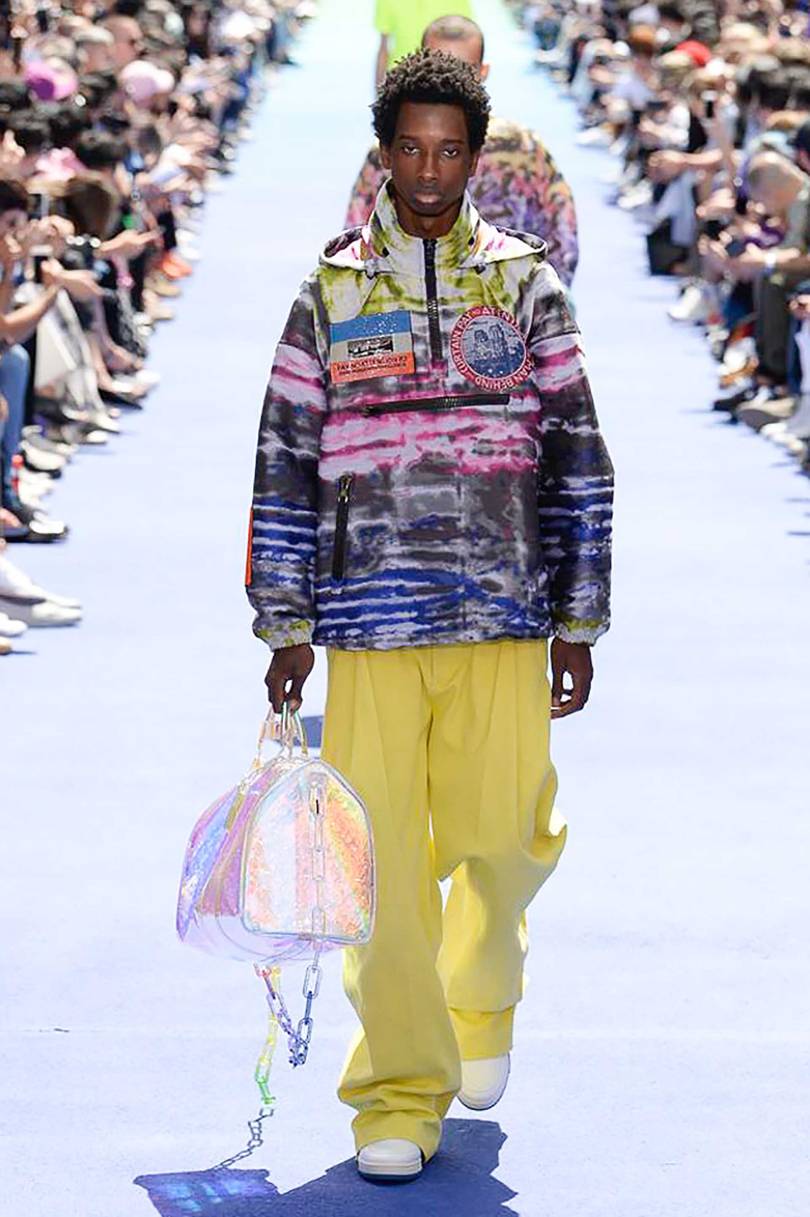 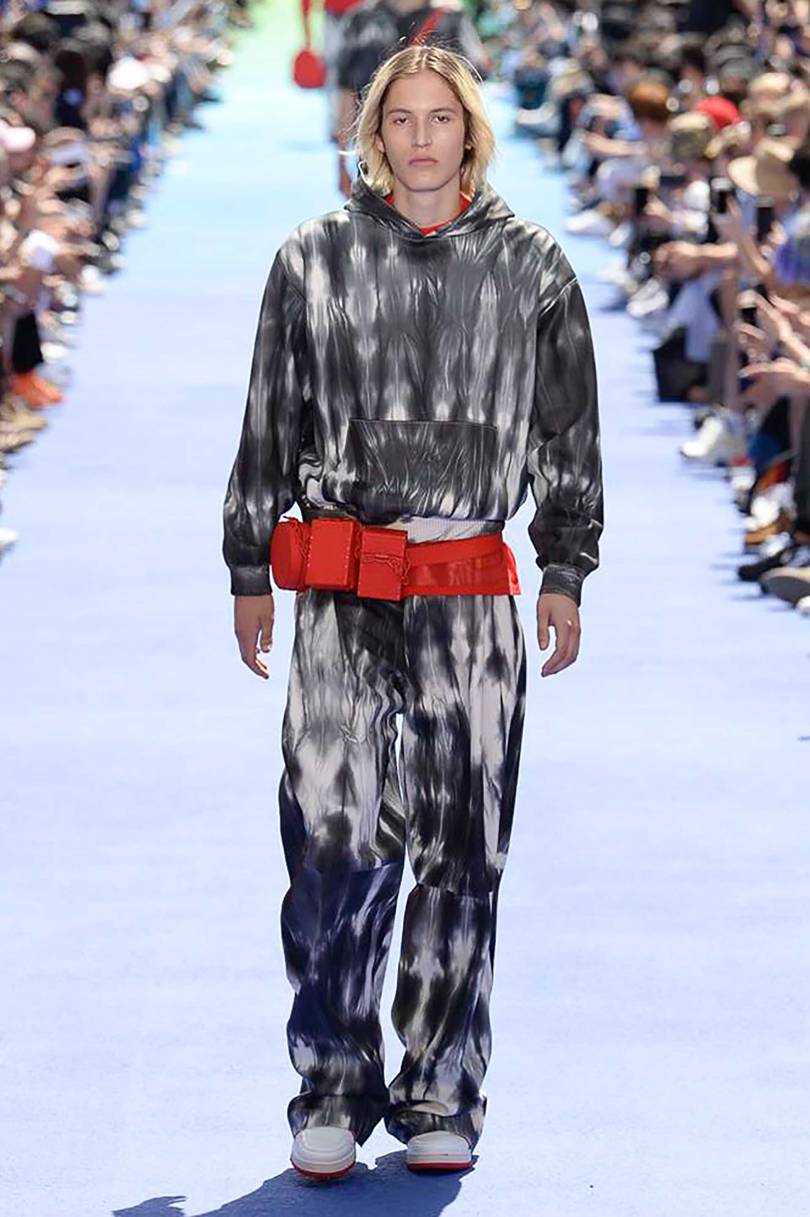 Accessories such as utility belts were also on display. 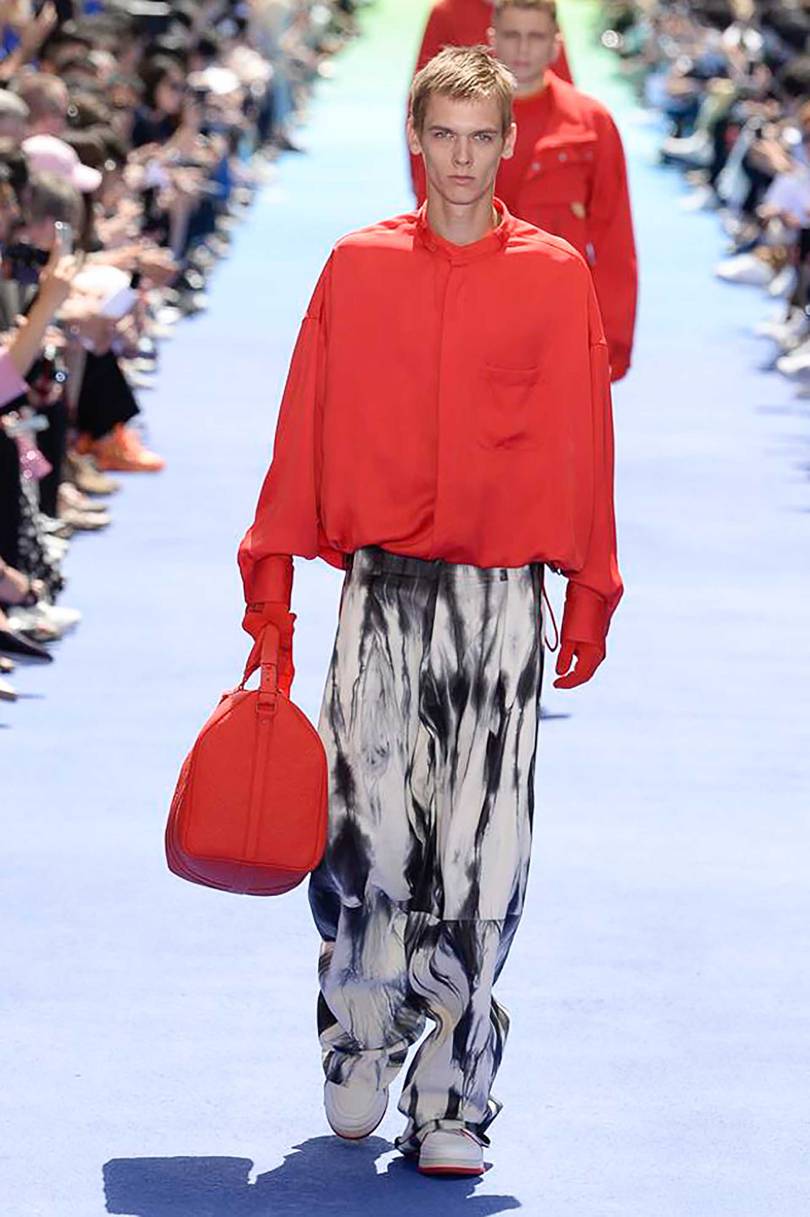 Marblesque silhouette on the runway. 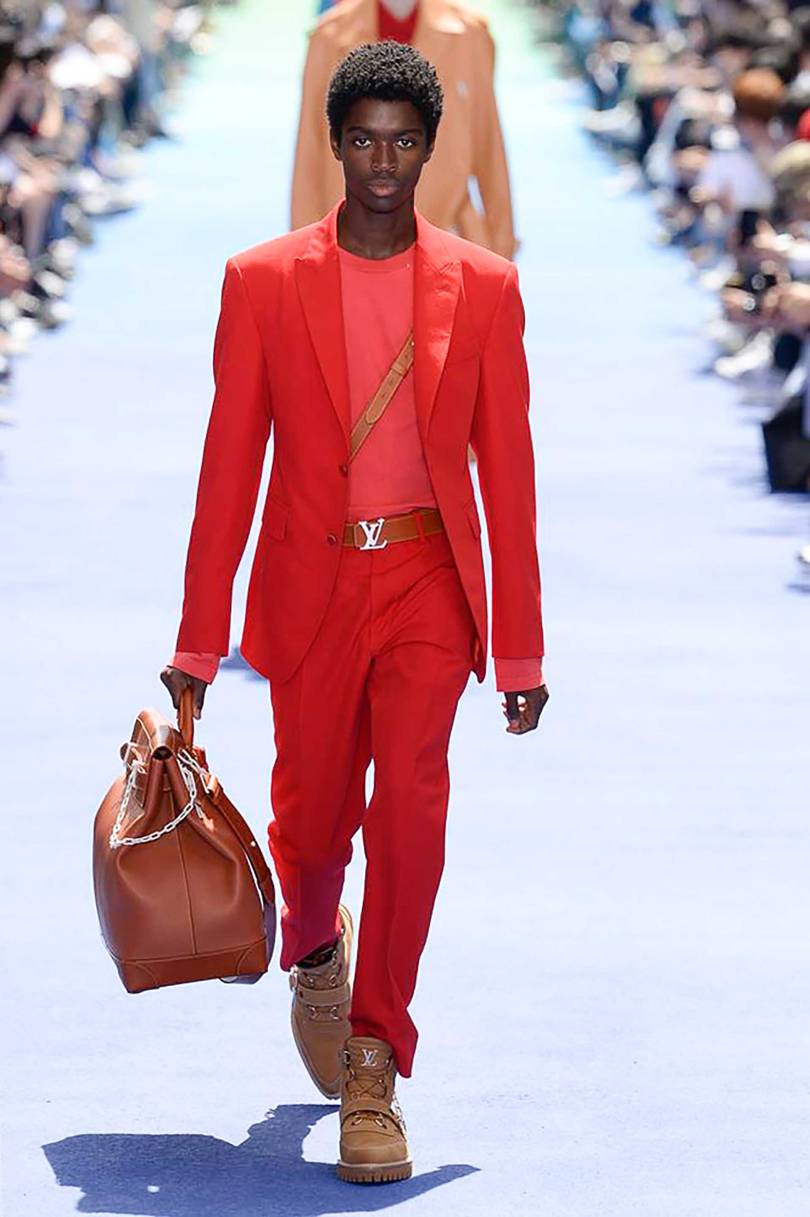 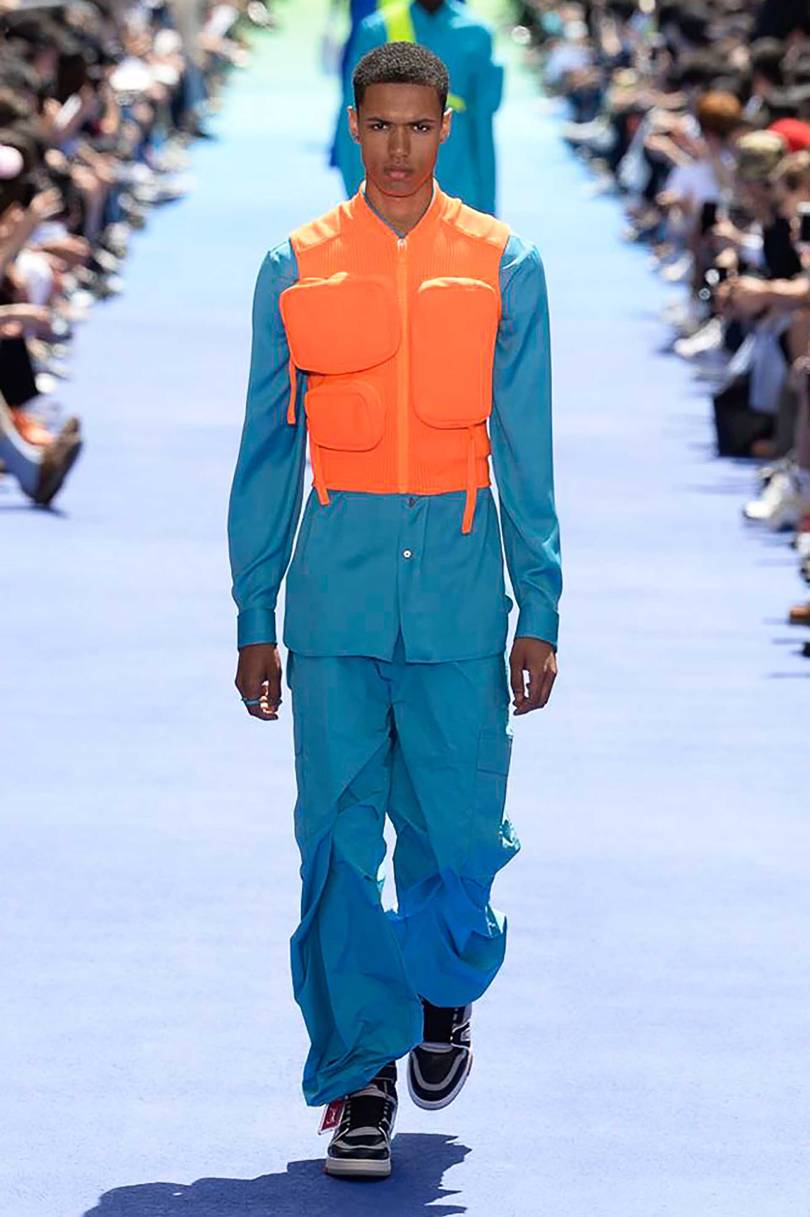 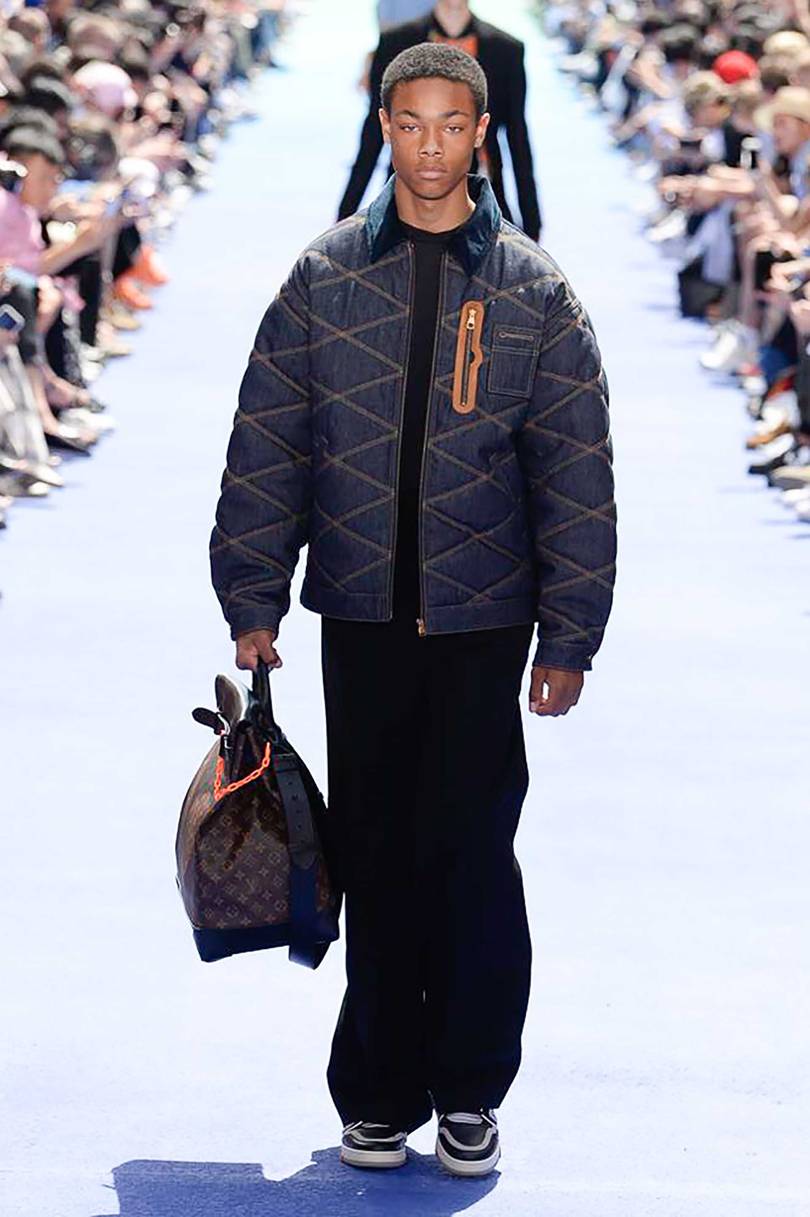 One of the few LV monogram pieces making an appearance. 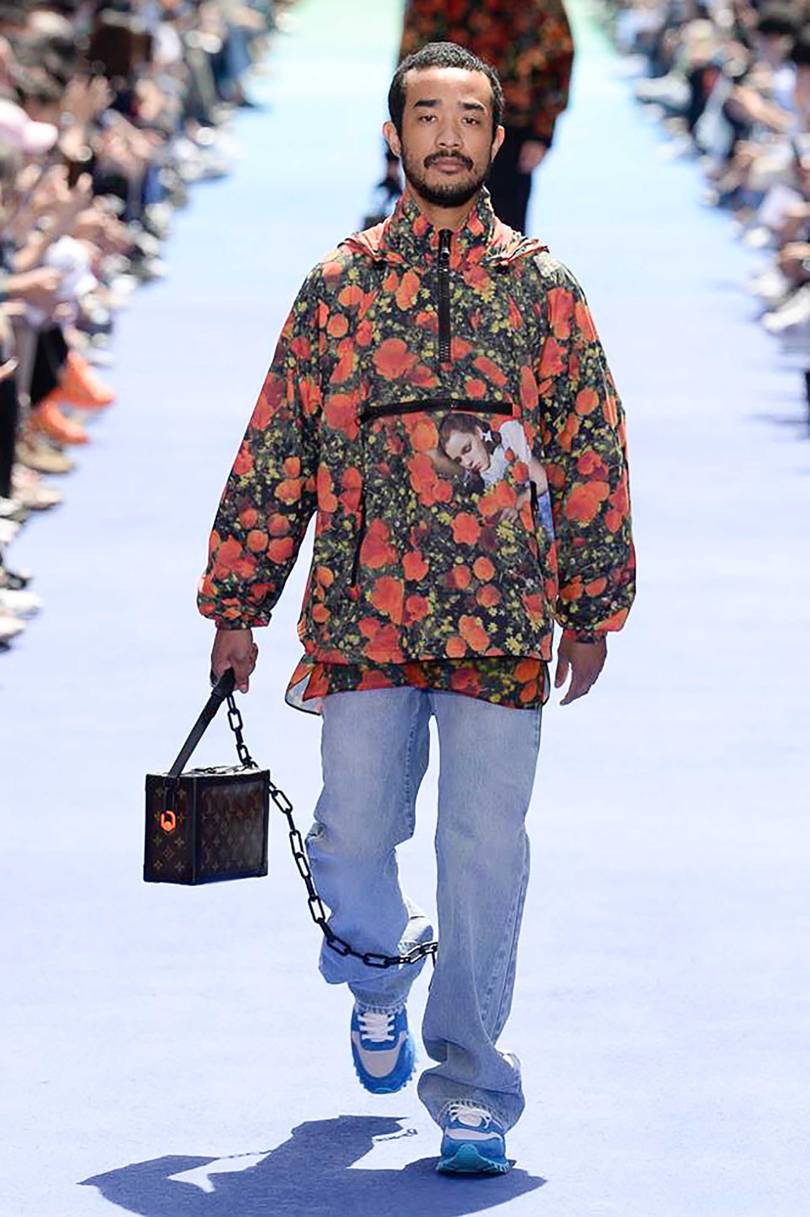 Another LV monogram piece that graces the runway. 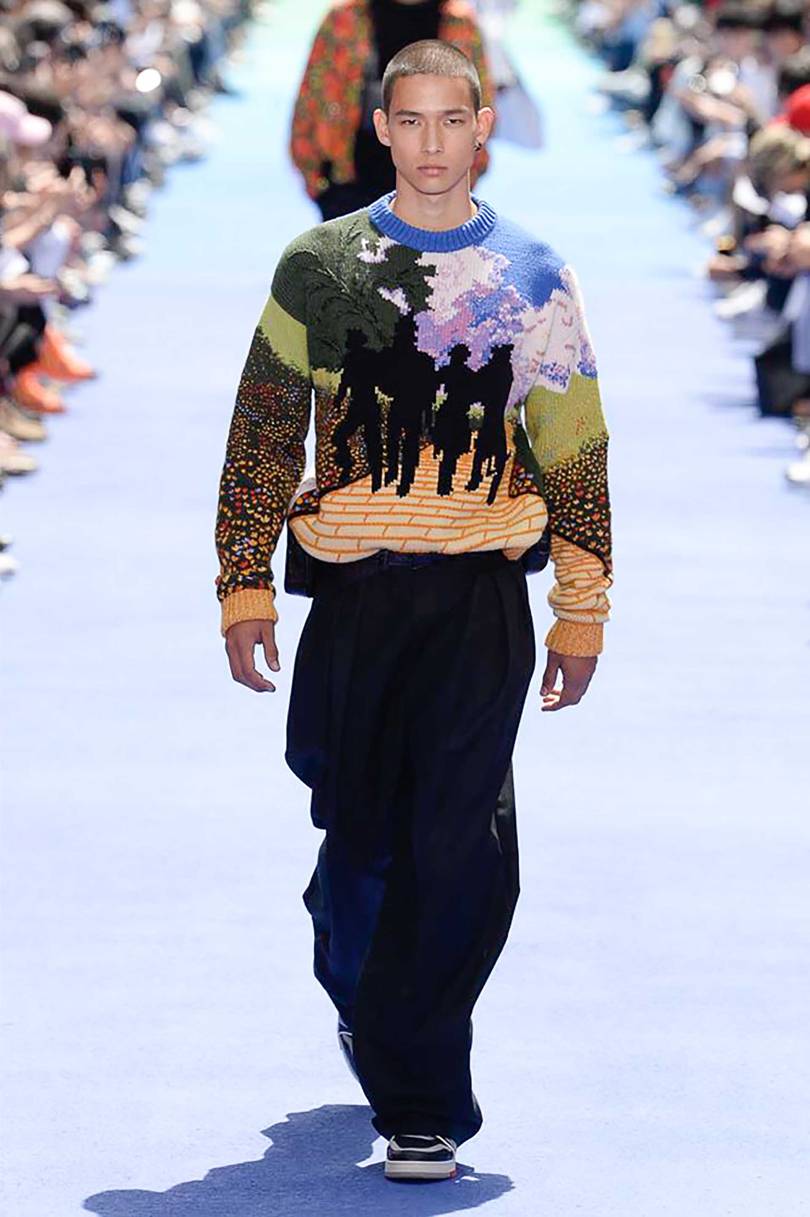 The Wizard of Oz-themed graphic piece, which is in collaboration with Warner Bros. 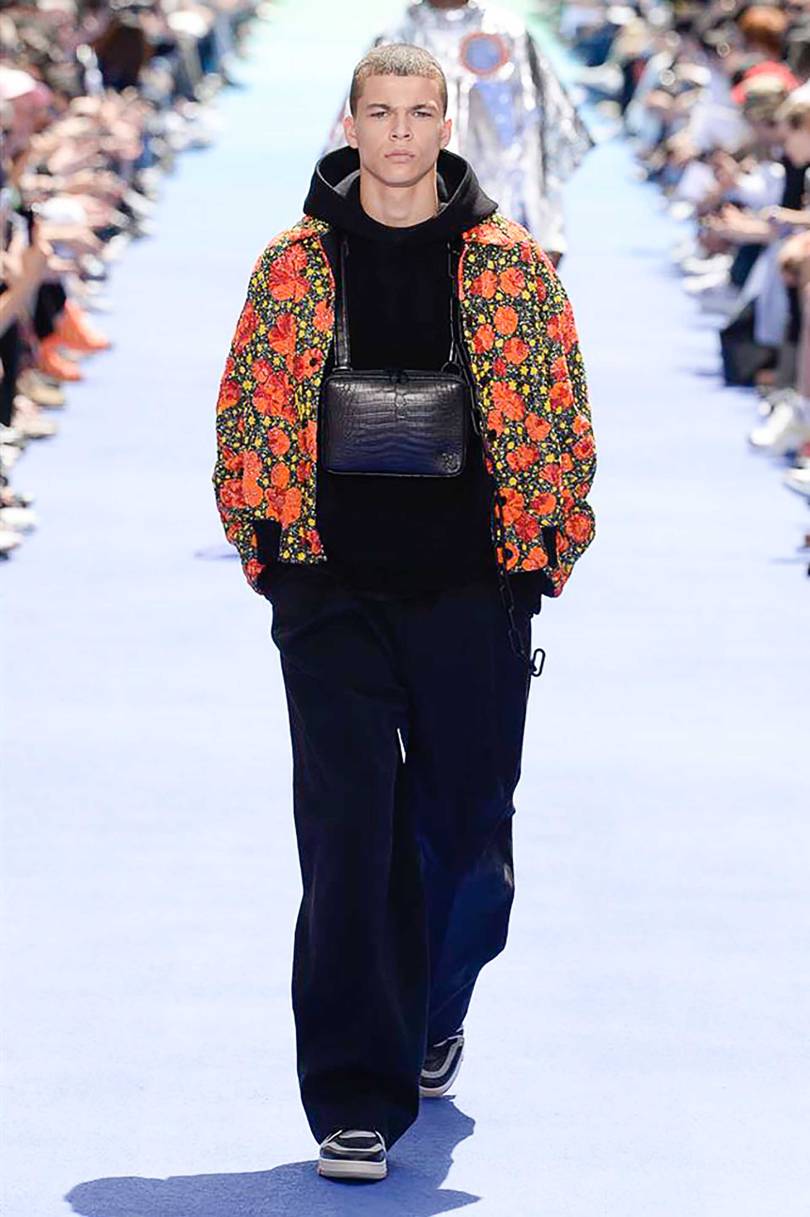 Bringing the rose garden to the hood. 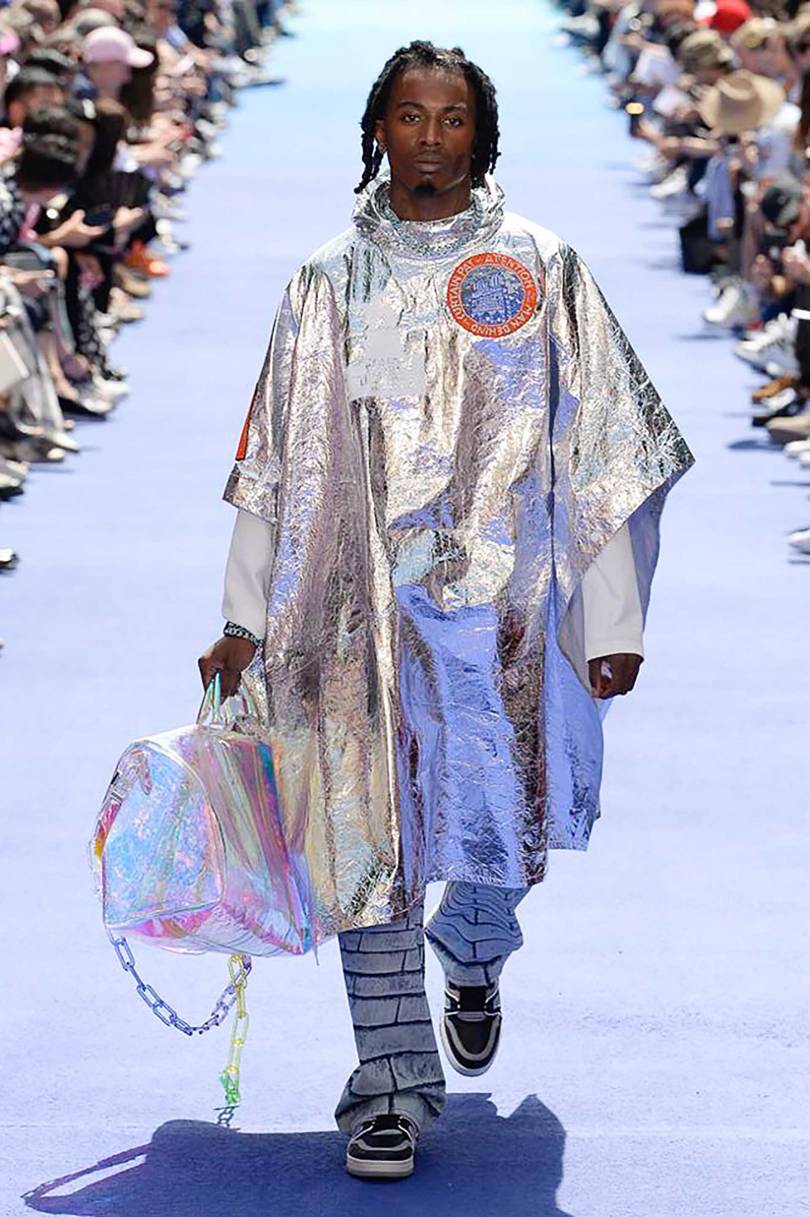 Playboi Carti closed out the show with a holographic poncho and bag to match.

Louis Vuitton Menswear LV Off-white Virgil Abloh louis vuitton ss19 Spring Summer 2019
Wi-Liam Teh
Senior Writer
Wi-Liam is a geek at heart with a penchant for tattoos. Never without a drink in hand (preferably whisky, gin, or Guinness), he is also a writer by day and a keyboard warrior by night. On his day off, he masquerades as a streetwear and sneakerhead enthusiast while his bank account says otherwise.
Tech Cars Watches Entertainment Food Drinks
Sign up for our newsletters to have the latest stories delivered straight to your inbox every week.