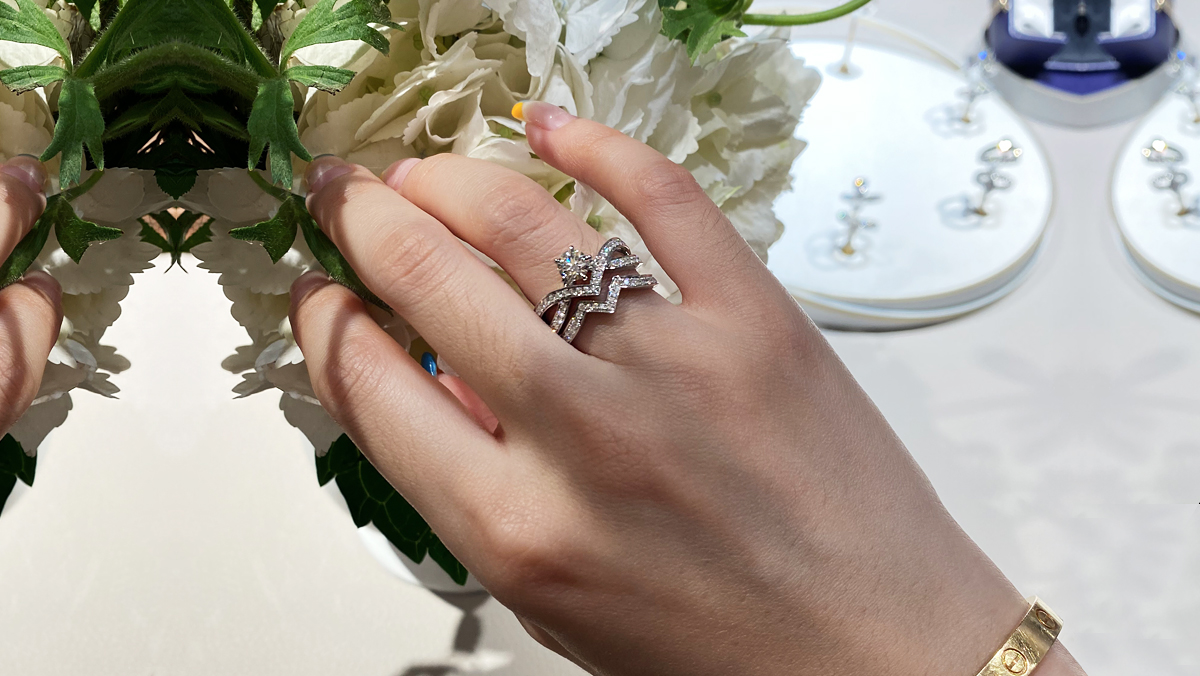 As editors at Lifestyle Asia, we’re privileged to get a first look at the most exciting new luxury goods daily. That’s what you’ll find in Weekly Obsessions: a running list of highly covetable items we’re currently mad about — because if it’s on our radar, it should definitely be on yours, too. From the fashion must-haves of the moment to lust-worthy watch releases, scroll through to see what our editors are obsessing over this week.

Like myself, many people choose to continue to wear their engagement ring after getting married by stacking it with the wedding band. What I noticed is that (understandably), many brides do not realise until afterwards that most solitaire rings — the common choice for engagement rings — do not stack well. Usually, given the larger frame of the head, which is where the diamond goes, will push against the second band. What it means for you is that you’ll have to go find a wedding band with a design that works around your engagement ring. This not only limits your choices, but it also takes extra time to search for the right one, and potentially puts more stress on your wedding planning.

I’m already married so I’ve already gone through the process, but nonetheless I’m extremely happy to see the people at Chaumet solving this common yet often unexpected issue for all newly-weds-to-be. Under its Crown Your Love collection, Chaumet has created a series of beautiful bridal rings that, while gorgeous each on their own, are designed to be stacked into a set of three: one for the engagement (From HK$71,200, depending on the size of the centre diamond), one for the wedding (HK$25,800), and even a spare (HK$35,700) for your first anniversary, or maybe as a push present. I absolutely adore the Joséphine Amour d’Aigrette trio above, but since I’m (happily) all set, I would highly recommend them to any couple currently planning their nuptials. —Cindie Chan, Style Editor

These room sprays have resurfaced as part of Aesop’s dreamy ‘Nourish Your Wellbeing’ campaign — a regularly updating circular of diligent self-care recommendations spread through the arts, philosophy, good food and music — and the scents are as comforting as the suggestions that come with them.

Boxed in a trio (HK$770), the three attractive scents offer an antidote to the mundane, featuring blends of neroli, patchouli and warm and woody myrrh; bracing pink pepper with smoky tobacco; and a bright green and citrus blend with cedarwood and cardamom. Spritz this in the morning before you leave the house so you can return to its lingering whiff in the evening; at your desk when you’re in need of some uplifting; or in a more practical vein, when you’re hoping to neutralise the humid odours that inevitably creep into the house or closet during Hong Kong’s long summers. —Evelyn Lok, Deputy Editor

Despite a global consumption culture that’s become increasingly homogenous (thanks to the insidious tinkering of Silicon Valley) it’s still rare to find watches that are able to flit effortlessly between the worlds of horology and fashion. In 2020 only a handful of timepieces can claim this feat: Cartier’s Tank, Patek’s Aquanaut, various Rolex ‘professional’ models, and of course, the Royal Oak.

This year, Audemars Piguet looks set to consolidate the desirability of its most popular collection with four new models — each measuring 34mm and equipped with an automatic movement from Vaucher. The slightly turgid (translation: mostly male) part of the collecting community has derided this as a ‘chick’s watch,’ though more astute industry watchers have pointed out that it’s a fantastic gapstop within the broader Royal Oak lineage — likely to appeal to those who want vintage proportions but modern tech.

There’s already a huge amount of noise surrounding the diamond-set blue-dialled number amongst the general public, though I personally gravitate towards the two-tone (HK$169,000), an execution that is historically linked to smaller 70s-era jewellery watches. —Randy Lai, Watches Editor

Hybrid sneakers often get a bad rap, owing to the fact they’re neither fish nor fowl. When done correctly however, this mixture can yield amazing results. Japanese cult favourite Visvim has obviously taken inspiration from the rugged moccasin, melding it with modern features such as a chunky aged white outsole (approx. HK$5,800). The upper is crafted from plush Swedish cow suede and is affixed using a built-in leather lace wrap system which is secured to concho-inspired metal hardware. In beige, the exaggerated silhouette is a little easier to pair against both light and darker denims.—Alexander Esmail, Contributing Writer

The best new sneaker drops to know about in July 2020