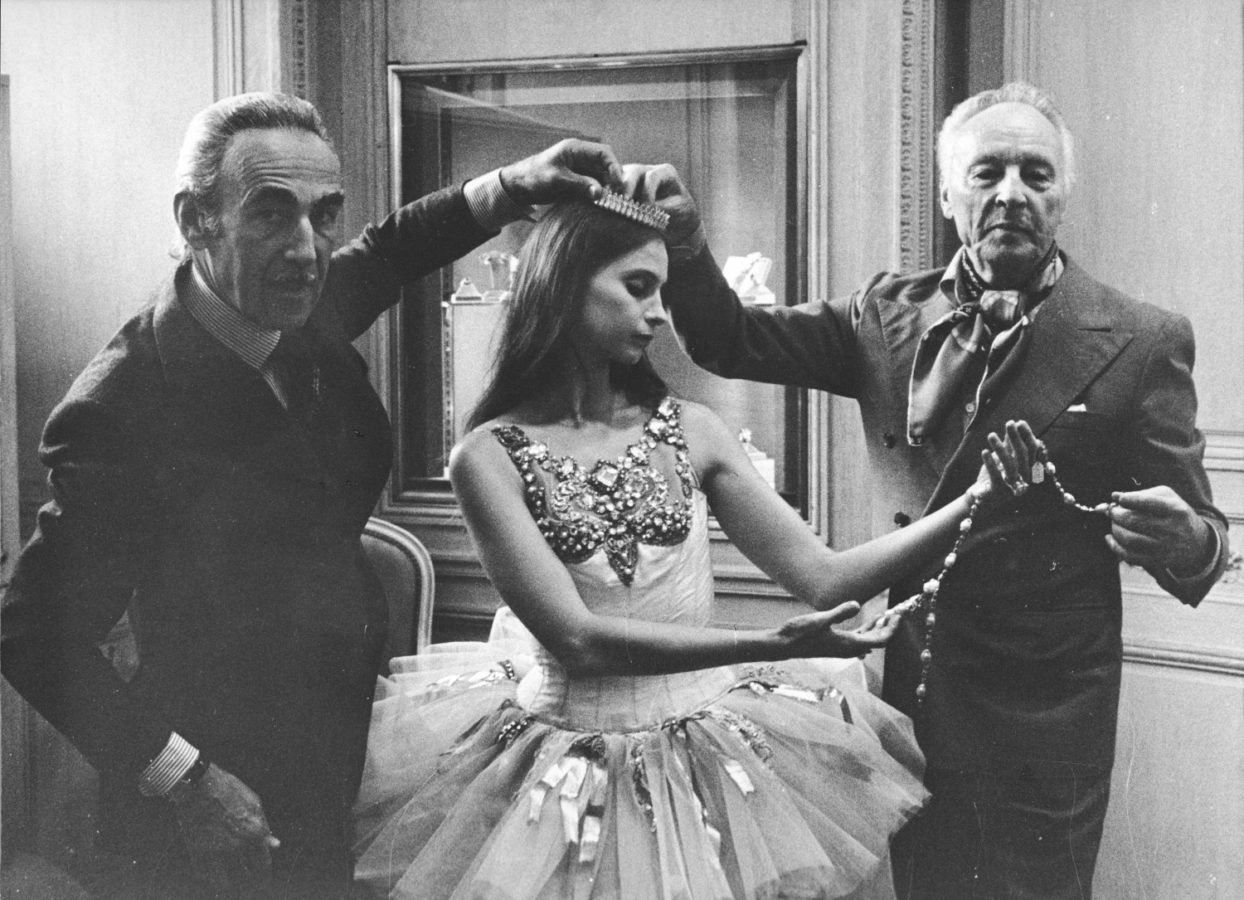 Van Cleef & Arpels’ obsession with ballet has resulted in the most beautiful ballerina clips, enchanting timepieces and even a classic repertoire. As the Hong Kong Ballet prepares for its performance of Jewels, we speak with Lise Macdonald, Director of Patrimony and Exhibitions at Van Cleef & Arpels, to delve into the maison’s history with the world of dance.

Ballet has been intrinsically tied to the jewellery house of Van Cleef & Arpels for almost 100 years. One of the maison’s co-founders, Louis Arpels, loved dance and often took his nephew Claude to the Opéra Garnier, just a short walk from the brand’s boutique on Place Vendôme. There, in the gilded and regal auditorium, they watched as ballerinas twirled and leaped across the stage, every movement a demonstration of strength, elegance and poise. Back at the workshop and with images of the performance still fresh in mind, Arpels toiled to bring the ballerinas to life once again, envisioning their fluid movements and elegant tutus in the sparkle of precious gemstones and metals.

According to Lise Macdonald, the Director of Patrimony and Exhibitions at Van Cleef & Arpels, dance has always been a source of inspiration for the maison, but only after the creation of the first ballerina clip in 1941 did it become one of the main pillars for the brand today.

“This taste for the art of music and dance has been around even before the 1940s, but 1941 was really the rise of the ballerina, which was then further developed and enhanced until today,” explains Macdonald. “It’s really become one of our pillars of expressions since. Interestingly enough, they appeared in the middle of the Second World War, together with the fairies that were created at the same time. They were really seen as positive figures, and elements of a positive vision on life.”

These first ballerina clips, created after the family has settled in New York, were miniature figurines with rose-cut diamond faces, wearing gold or platinum skirts dressed in precious diamonds, rubies, emeralds and turquoise. Since then, the elegant and majestic dancers have become a major motif that still inspires Van Cleef & Arpels’ watch and jewellery collections today.

But that’s not the end of the story – far from it. Van Cleef & Arpels’ affinity to ballet only grew stronger in the 1960s, when Claude Arpels became acquainted with George Balanchine, the choreographer and co-founder of the New York City Ballet. Finding a common passion for both gems and dance, Claude Arpels and Balanchine immediately struck up a friendship that later on led to an artistic collaboration – a ballet inspired by gemstones.

Jewels, a three-movement non-narrative ballet that pays homage to emeralds, rubies and diamonds, premiered in New York in April 1967. Each movement is dedicated to one of the precious stones and set to music by a different composer. “Emeralds” uses a piece by Gabriel Fauré, “Rubies” by Igor Stravinsky and the finale, “Diamonds”, was choreographed to music by Pyotr Ilyich Tchaikovsky. To this day, Jewels remains one of Balanchine’s best works and is considered one of the most significant ballets of the 20th century. It’s been interpreted countless times and performed around the world by companies such as the Ballet de l’Opéra National de Paris, the Mariinsky Theatre Ballet in Saint Petersburg and the Miami City Ballet.

“It was a common love, respectively, one for dance and the other one for jewels. In terms of concrete outcome, which can be traced historically is definitely the ballet,” says Macdonald. Nonetheless, their relationship was an enduring one. Within Van Cleef & Arpels’ collection, you’d find traces of other objects tied to the ballet, clips that later transpired to be inspired by Jewels.

“There’s a clip that we have done in 1967, which is based on Jewels by Balanchine, of Suzanne Farrell in the last act Diamonds. It’s clear because we have an archive image where you see the position of the ballerina and you see the clip where it mimics her on the position,” Macdonald shares.

To this day, Jewels remains one of Balanchine’s best works and is considered one of the most significant ballets of the 20th century

Marking the 40th anniversary of Jewels, Van Cleef & Arpels created the Ballet Précieux High Jewellery collection, which highlighted the beauty of emeralds, rubies and diamonds. Once again reinstating the importance of dance, the house also worked with Benjamin Millepied, a former principal of the New York City Ballet and founder of the LA Dance Project company, which culminated in the creation of the Gems trilogy, a work that complements Balanchine’s choreography, and another revolutionary piece that represents precious stones in the form of dance.

In fact, so important was Jewels to the house that in its latest watch collection, Van Cleef & Arpels has endeavoured to recreate the three ballet masterpieces on the wrist. Just as Louis Arpels brought ballerinas to life through precious diamond clips and jewellery, the brand’s artisans, jewellers, enamellers and watchmakers have recreated the entire ballet in three acts right on the dials in the Lady Arpels collection – ballerinas, choreography, music, everything.

How so? This is how the magic happens. On the baroque-styled dial that depicts a theatre stage, the drapes draw apart to reveal miniature paintings of ballerinas, who arabesque, pirouette and jeté on the rotating carousel to the gentle chime of music. This 20-second musical animation can be activated at any time you fancy via a pusher at 4 o’clock. More than just a timepiece, the Lady Arpels Ballerines Musicales is an artistic performance in miniature.

Van Cleef & Arpels had the idea for the project more than a decade ago, but the complexity presented by the on-demand animation meant it took seven years of development and research to create a manual-winding mechanical movement capable of telling the time and sounding out the musical compositions.

Inside the watch is a music box made up of a 10-blade keyboard, plucked by pins that are located on the underside of the rotating disc with the dance scene. Four gongs and hammers of the carillon provide additional notes for the melodies. Working closely with musician Michel Tirabosco, the house was able to adapt the arrangements to fit the two instruments in the watch. Still, it’s a grand affair: the movement of the Lady Arpels Ballerine Musicale Rubis watch, for example, performs Stravinsky’s Capriccio with no fewer than 92 notes: 69 played by the music box and 23 by the carillon. An incredible feat indeed.

We remark that it’s amazing to see the evolution of dance through chronologically viewing the ballerina clips in Van Cleef & Arpels’ collection and Macdonald agrees wholeheartedly.

“Absolutely, it shows the evolution of how we’ve mastered movement because in fact, when you look at the first ballerinas, they were more positioned, captured a bit still,” she says. “But very quickly, you can see the different movements in the body, the position of the legs and the hands that are elongated, and body details with more muscular representation. I think one of the great mastery of Van Cleef & Arpels is to be able to capture this notion of movement alive.”

Van Cleef & Arpels’ ballet journey continues this month. As part of the Le French May Arts Festival 2021 programme, the jewellery maison is proudly presenting the ballet classic, Jewels by Balanchine, performed by the Hong Kong Ballet. Five performances are being staged at the Hong Kong Academy for Performing Arts’ Lyric Theatre on May 21-23.

We’ve fallen in love with Van Cleef & Arpels’ magical ballerina clips, and have been charmed by the incredible scenes played by the three Lady Arpels watches. Now’s the chance to watch the inspiration for it all performed live before our eyes. We wouldn’t miss it for the world.

Find out more about the Hong Kong Ballet performances here.

Van Cleef & Arpels Hong Kong Ballet
Lifestyle Asia
Here's where you can read the latest news and stories from Lifestyle Asia and our sister titles PrestigeOnline and Augustman, curated from all of our editions in Hong Kong, Singapore, Kuala Lumpur, Bangkok and India.
Luxury

10 romantic gemstones that will express your love