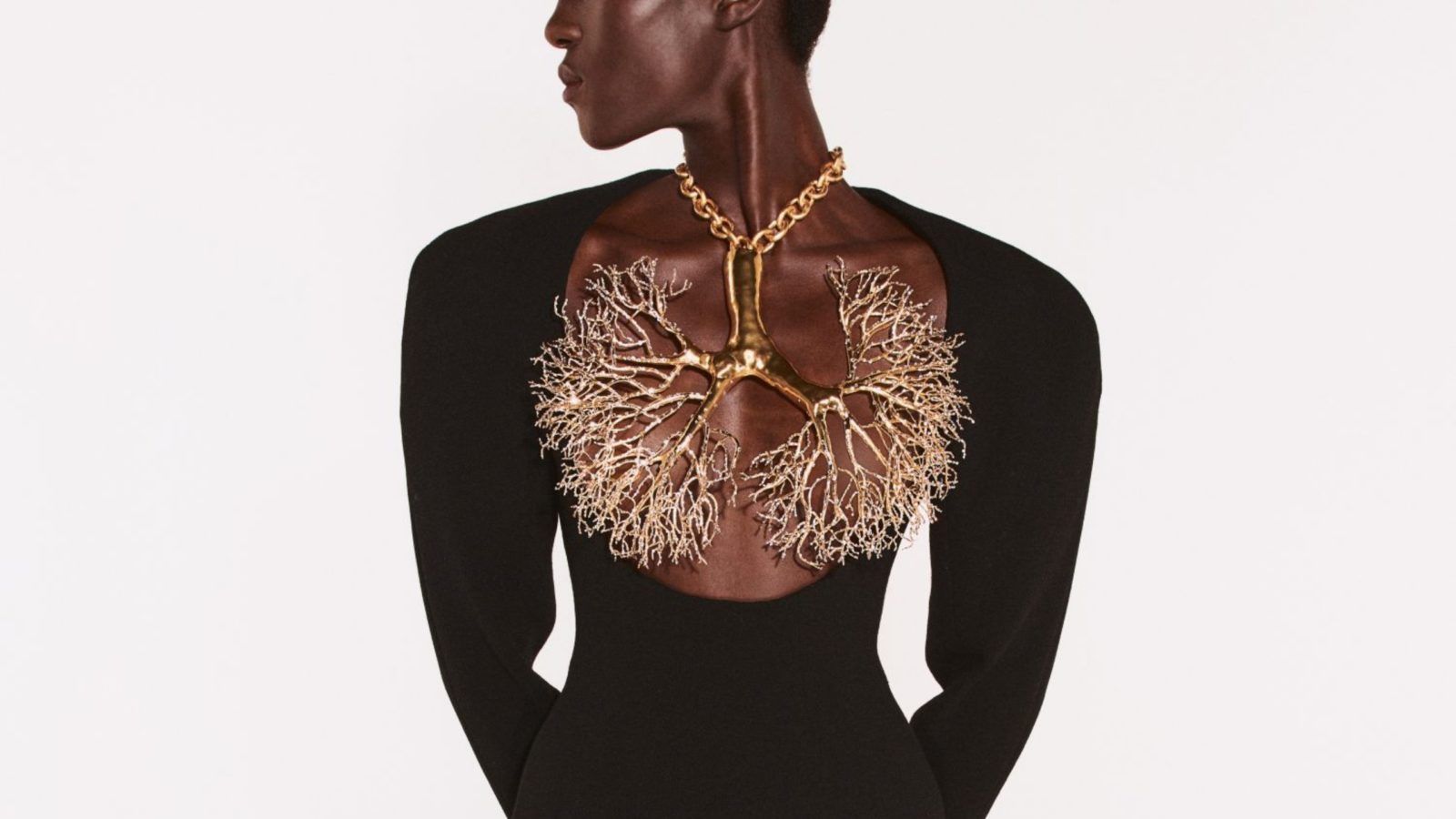 On paper, a slinky black dress styled alongside a statement gold necklace is predictably humdrum; nothing to write — or text; or any manner of communication — home about. Until the equation is casted on one Bella Hadid. To the surprise of absolutely nobody, the 24-year-old supermodel, once again, proves she has the Midas touch. Everything she does is magic! Everything she touches turns to gold!

Bella Hadid stole some breaths at this year’s Cannes festival in Schiaparelli, with the yoke of her dress entirely cut out and replaced by gilded trompe l’oeil lungs — creeping, crawling and branching off down paths of bronchioles that also look a little like roots. Tree branches. How your synapses connect in your brain when you have a thought.

As for us mere mortals who will not have the opportunity to be styled-and-coifed in Schiaparelli haute couture save for very vivid fever dreams, here are some extra-large necklaces that could stand-in as inspiration. For your consideration: Go big or go home! 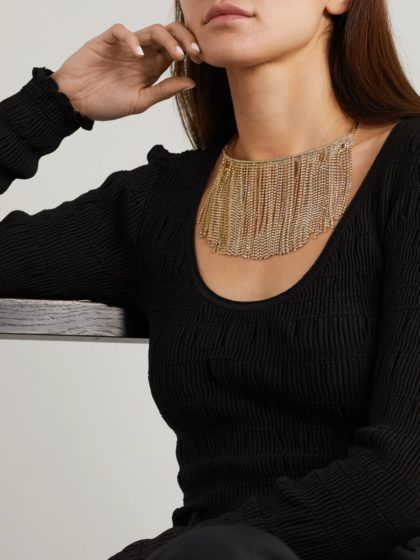 The many, many strands of crystals making up the execution of this Rosantica necklace are made to move with your every step; your every turn. Every single movement, no matter the subtlety, really. We’re styling this with a pretty scoop-neck that follows the tender curve of the necklace’s bib-like swoop, probably with something ribbed-knit or cotton jersey for a hi-lo moment. Unless you’re dressing to impress, in which case: Black satin and opera gloves. Fancy. 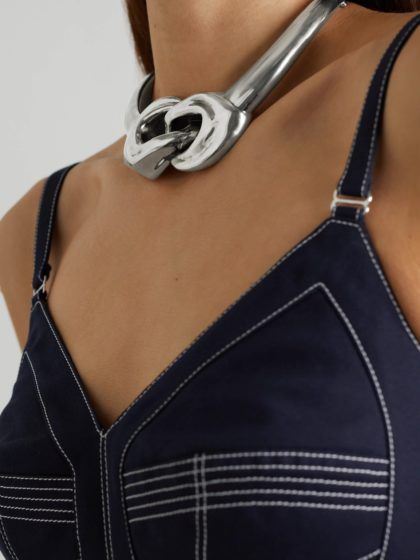 If it’s drama you’re looking for, Alexander McQueen’s incredibly large choker, casted in the image of a pair of life-sized lobster claws, should do the trick. You won’t — can’t, actually — miss it; it’s much, much too big to be glossed over. If the piece looks a smidge on the side of intense, fear not: The bulk of the choker was specifically designed to sit comfortably at the notch of the collarbone. 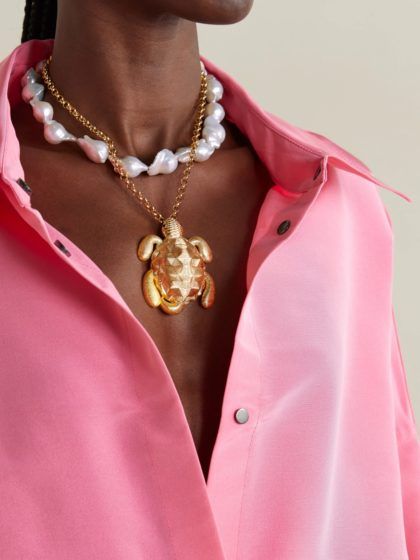 There’s always a patent sense of found magic that accompanies a Begüm Khan design, the kind that feels a certain measure of eccentric so unlike the very dainty, very slight jewellery we’ve seemed to gravitate towards in recent years. Khan’s designs? Unafraid of heft. A very large eyeball follows a very large beetle follows a very large giraffe; and for this particular design, a very large turtle afloat beneath a substantial string of freshwater pearls. We’re envisioning this piece worn on vacation against crocheted knits and raffia sunhats. 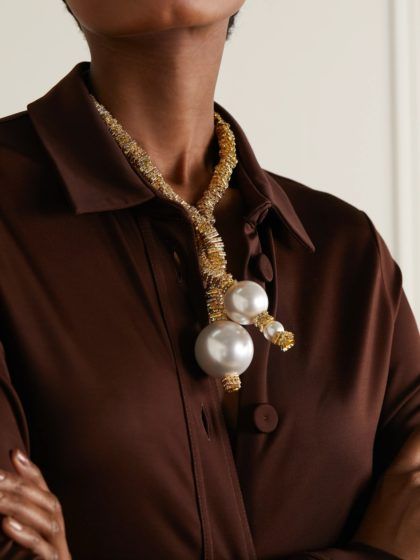 This is a necklace, yes, but it’s also a bracelet, an anklet, a hair accessory and whatever else your mind and motor skills can conjure up. PEARL OCTOPUSS.Y’s Golden Snake design contorts into formations that must take a little bit of imagination, with the final execution made even more striking with the colossal faux pearls punctuating either end. Some might say there’s a time and place for jewellery this dramatic, but we’re keen for a touch of fantasy on a casual Monday morning. Or any other. 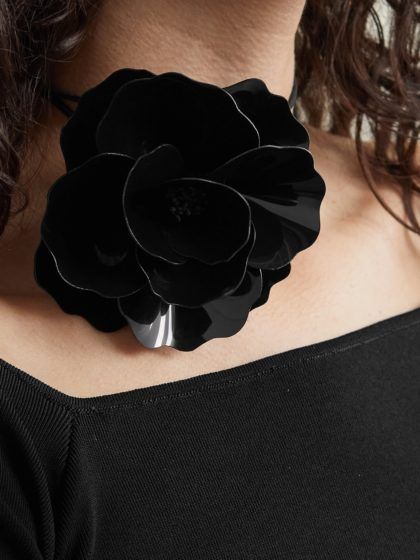 Whether you’re of a fancy debutante class or simply reminiscing on your favourite prom memory, the corsage exchange is a formative moment, to be held safe, sound and treasured. Rendered for the neck, not the wrist; from patent leather, not real petals, this floral silk choker from SAINT LAURENT is all grown up — and made to last beyond a single evening. Take this piece for a spin in something fantastic; something you’d want to have worn to prom all those years ago. 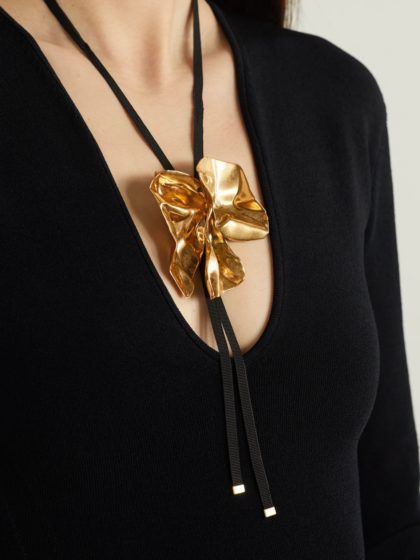 The pendant on this AZ Factory necklace is something of a Rorschach test. Is it a nondescript flower? A secret love letter ripped out and crumbled into a sad, indiscernible wad? A dedication to ‘art’ and ‘sculpture’ and arbitrary crevices? Make for art school lectures in a full blacked-out ensemble so this piece’s grosgrain blends in and disappears. Now, on show: A single gold-toned bauble, suspended in frame. 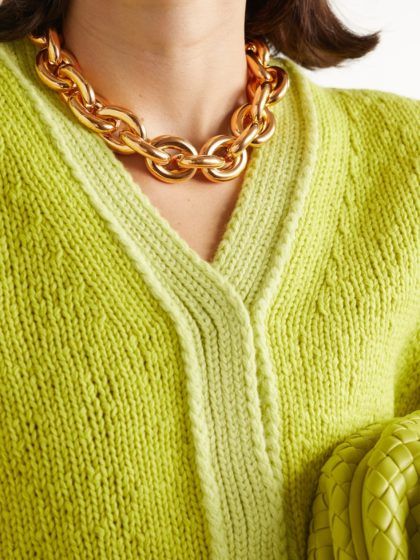 Those dainty, blink-and-you’ll-miss-it chain necklaces? The ones made for layering? This Bottega Veneta variant is defiantly not it. This is not a chain necklace that guest stars; rather, it’s the prima donna of the company. Lead actor. The star of the show. Enchained in chunky, oversized links, this gold-plated beauty is a direct reflection of BV’s current house code, with similar links made to accompany the brand’s series of bags and leather goods. 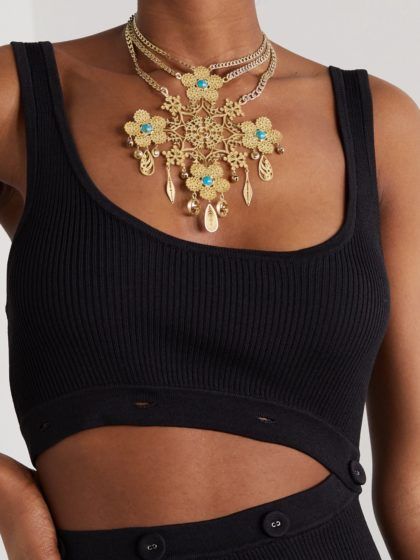 Ornate is the word that comes to mind with this necklace from Gucci’s ‘Epilogue’ collection, with its graphic design bared at the yoke like a hand-cut snowflake. Or an incredibly intricate candelabra. Or a tea service currently holding court behind glass at a museum. There is a staggering amount of detail etched through this piece, which means the best way forward is to pair it with something simple. A black tank top. A white T-shirt. 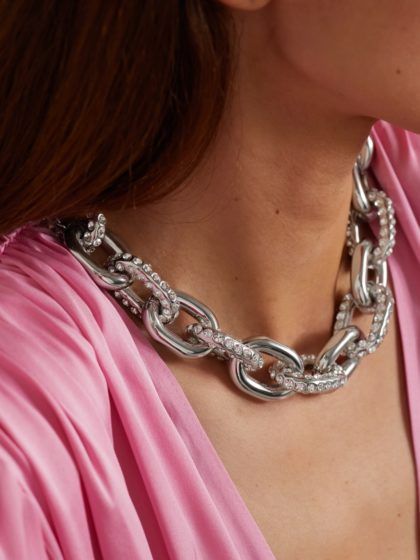 Paco Rabanne’s predilection for metallics is firmly entrenched within the brand DNA, with pailettes and chainmail both recurring motifs amidst the brand’s half-a-century-plus tenure. It should come as no surprise, then, that this chain necklace is rendered alternately in silver-tone metal, crystals and extra-large linked chains meant to make a big, big statement. 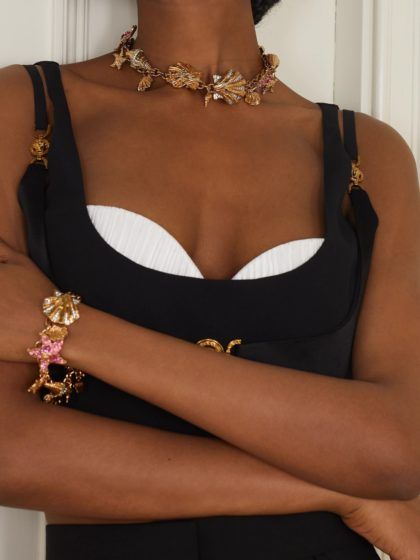 Strung along with charms you might scavenge from a wander along the beachfront, Versace’s Trésor de la Mer choker is stippled with crystals in every colour under the sun — or, under the sea; after all, the oceanic motifs are a reference to Gianni’s iconic collection of the same name from Spring 1992. If you’re lucky enough to find yourself with toes tucked snug in warm, sun-heated sand this summer, we’re expecting this piece to make a grand entrance alongside a pretty maillot and a heavy glass of white.