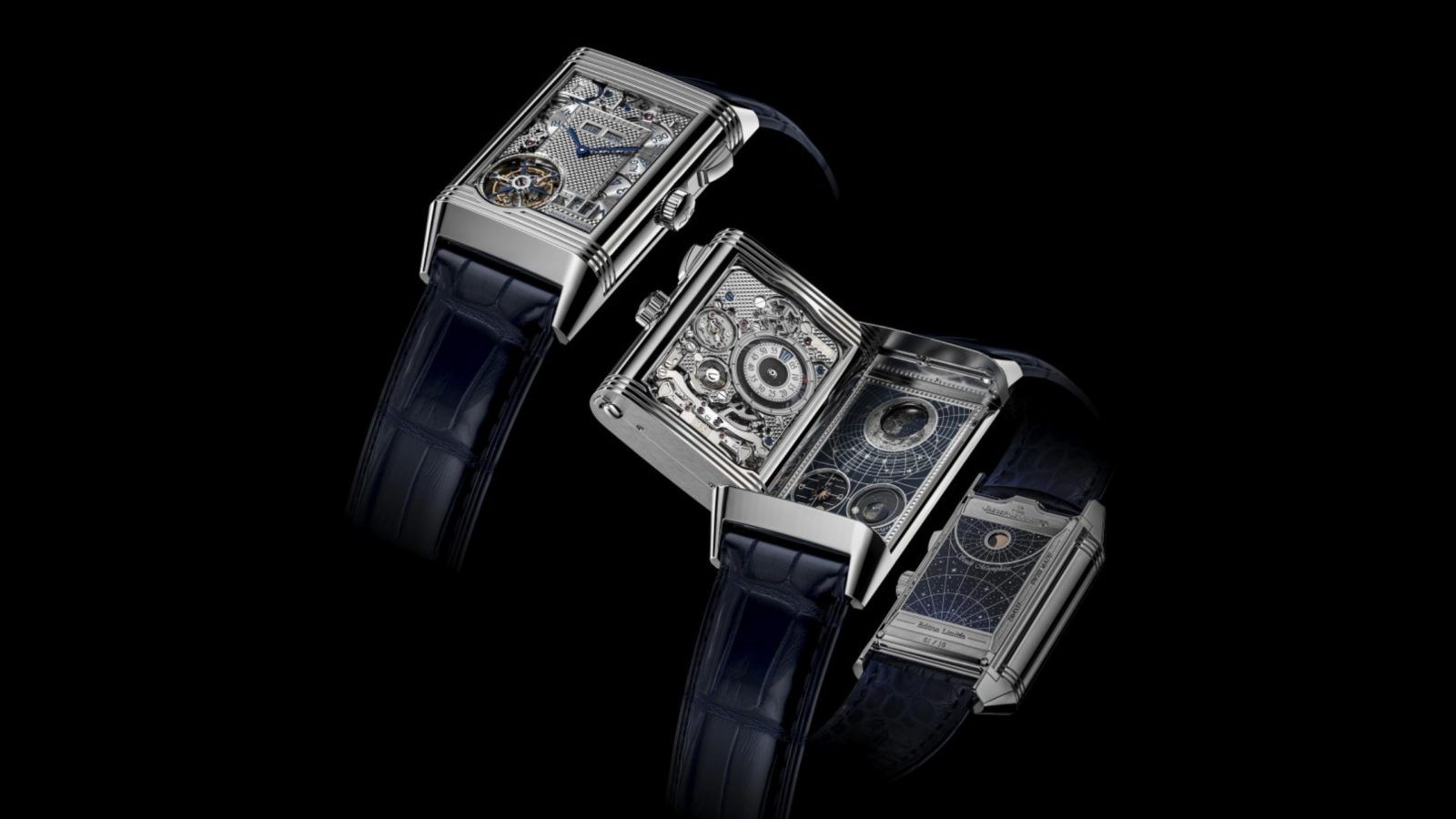 Mechanical watchmaking is one rooted in the past, but this has not stopped maisons and watch manufactures from constantly innovating and improving on their instruments of time-keeping, creating ground-breaking and ultra-complicated timepieces that continue to shock and enchant the modern world. From complications never before seen, to new material breakthroughs and completely unheard of ways of watchmaking, here is our selection of the most innovative timepieces that have just been released at the Watches & Wonders 2021 digital fair.

You may also like…
Style
Q&A: Jean-Marc Pontroue, CEO of Panerai, on sustainability in watchmaking
Style
Q&A: Laurent Dordet, CEO of Hermès Watches, on the brand new, all-terrain H08

Jaeger-LeCoultre really pulled out all the stops to celebrate the 90th anniversary of its most iconic (most deservedly used here) watch – the Reverso. The new Reverso Hybris Mechanica Calibre 185 Quadriptyque is the most complicated Reverso yet, boasting 11 different complications and 12 patents. It’s an absolute showcase of all the different expertises the Swiss manufacture has to offer, from sound, celestial complications, to precision and craftsmanship.

The Quadriptyque is the world’s first wristwatch with four functioning display faces, making use of the swivelling case design of the Reverso to display 11 complications on the double-faced case and cradle of the watch. The watch takes astronomical readings to the next level. Three displays of lunar information are displayed on the interior face of the cradle — the synodic cycle, the draconic cycle and the anomalistic cycle — which makes the Quadriptyque the first watch ever to be able to predict the next global incidences of astronomical events like super moons and eclipses.

The Calibre 185, which took Jaeger-LeCoultre six years of research, is a new movement made entirely in-house. Here’s what you’ll be able to read from the four faces:

Complicated as the watch is, the manufacture has ensured that the watch will be user-friendly for the wearer. The Reverso Hybris Mechanica Calibre 185 comes with a unique presentation box that has a built-in mechanism that allows the wearer to easily set all the calendar and astronomical displays of the watch after a period of being unworn.

To celebrate its 175th anniversary this year, Ulysse Nardin has reimagined what a marine chronometer would look like in the future, giving us the UFO table/ desk clock that’s more than just a time-keeping device. It’s a modern tribute to Ulysse Nardin, encapsulating all of the brand’s horological history in one single object, an homage to the marine chronometers of the 19th and 20th centuries, to the Freak of 2001 and the Blast of 2020.

“Reissuing a watch from the past by reusing vintage codes was not part of our creative intentions for this anniversary object. On the contrary, we wanted to reverse the trend and make a leap forward of 175 years, rather than a leap backward. We always look ahead. We wondered what a marine chronometer designed in 2196 would be like,” explains CEO Patrick Pruniaux in a statement.

Marine chronometers of the past were housed in wooden boxes and set on gimbals, with the purpose of counteracting the effect of the ship’s constant swaying on the stability of the clock while at sea. The modern Ulysse Nardin UFO emulates this, but reverses the process. The clock, which is protected by a glass-blown ovoid bell, sways on its own mechanical waves. Built on an imbalance, the UFO swings up to 60 degrees from its axis when nudged gently, calculated precisely so that it swings neither too fast or too slow and won’t affect the operation of the balance. The structure of the UFO gives us a mesmerising view of the six barrels working in plain view, giving the clock a power reserve of an entire year.

The UFO is made up of 675 components and powered by the UN-902 calibre, which features a triple time zone function, deadbeat seconds, hours and minutes. Only 75 pieces are made.

In an unexpected move but one that clearly resonates with the brand’s identity as an engineer, IWC has presented us with the Big Pilot’s Watch Shock Absorber XPL, the brainchild of the brand’s new engineering division, IWC Experimental.

It’s the first watch to feature the brand’s patented new shock absorber system called the SPRIN-g PROTECT, which goes beyond protecting the movement from your everyday impacts that range between 25 Gs to 5,00 Gs, i.e. hitting your watch against a table corner or whacked by a hammer.

At the heart of the system is a cantilever spring that allows the movement to be suspended within the case, protecting it against the g-forces generated by impacts on the watch. The system took eight years to develop, and was done so with fighter pilots in mind, who are constantly subject to high g-forces in cramped spaces, and the watches that they wear are constantly at risk of hitting against hard surfaces in the cockpit. Tests done by IWC at the Cavendish Laboratory at the University of Cambridge has shown that the shock absorber system is capable of protecting the movement from accelerations in excess of 30,000 g in impact tests.

Another key factor is the use of Bulk Metallic Glass, which has an amorphous microstructure, which is significantly more elastic than conventional metals. The case of the watch is also made of ceratanium, IWC’s ultra-lightweight high performance material, which allows the watch to come in at less than 100 grams. The unique crown system is another new innovation, allowing the movement to move independently of the case. At 44mm, the watch is extremely cool-looking and wholly original and definitely a refreshing and exciting offering from the Schaffhausen manufacture. The XPL is limited to only 10 pieces per year.

In recent years, Hublot has really established itself as the ultimate maker of sapphire watches. The journey started in 2016 with the release of the Big Bang Unico Sapphire and in the years since, the brand has developed and matured its expertise in machining sapphire watches in complex shapes and a variety of bold colours. This year’s release is almost a culmination of its efforts — the Big Bang Integral Tourbillon Full Sapphire comes with an integrated case and bracelet both of which are made from sapphire.

To achieve the look of pure glass, Hublot opted for the new Automatic Tourbillon calibre with sapphire bridges the HUB6035 automatic manufacture calibre, to maximise the watch’s transparency. The challenge lay in the case and bracelet, as all visible screws had to be removed. The case had to be completely reconstructed, the general geometry overhauled to integrate the case with the sapphire bracelet. Everything from the bridges and the main plates in the movement had to be reworked to give the illustration of all the parts being suspended in space.

You can’t talk about innovation and not mention Bulgari, who since 2014, has stacked up world records one after the other in its Octo Finissimo line, all in the quest for ultra-thinness. There’s been the thinnest ever automatic movement at 2.23mm, the thinnest tourbillon movement at 1.95mm, the thinnest minute repeater at 3.12mm, the thinnest chronograph at 6.90mm and last year’s thinnest tourbillon chronograph skeleton watch at just 7.40mm. This year the brand’s taken on the perpetual calendar with the Octo Finissimo Perpetual Calendar, and at a slender 5.80mm, sets the world record for the slimmest perpetual calendar watch.

The caliber BVL 305 is only 2.75mm thick, a remarkable feat indeed considering that a perpetual calendar is a pretty complex function in itself, being able to correctly adjust itself automatically at the end of 30-day months, and even at the end of February and even in a leap year. To maximise the thinness, the design engineers at the manufacture at Le Sentier utilised a micro-rotor instead of a full-sized rotor, effectively compressing the watch parts into the same level to achieve this ultra-thinness, although the entire movement still consists of a whopping 408 components.

The Octo Finissimo Perpetual Calendar features a retrograde date display, day, month and retrograde-display leap years, capable of telling the correct time and date until February 2100. Perpetual calendar watches are traditionally tricky complications to deal with, but Bulgari takes this into account with three correctors to easily adjust the different indicators: the date at 2pm, the month at 4pm and the day at a third pusher between 8 and 9 o’clock.

One last thing, the Octo Finissimo Perpetual Calendar is being launched in two versions, one in a titanium case, and another in platinum — another first for the brand, who’s never made an Octo Finissimo case in platinum before this.

Hublot Jaeger-LeCoultre IWC Schaffhausen Watches & Wonders jaeger-lecoultre reverso Watches & Wonders 2021
You might also like ...
Style
Q&A: Jean-Marc Pontroue, CEO of Panerai, on sustainability in watchmaking
Style
Q&A: Laurent Dordet, CEO of Hermès Watches, on the brand new, all-terrain H08
Style
Gucci enters the realm of high watchmaking with a debut collection designed by Alessandro Michele
Style
The best Audemars Piguet Royal Oak watches to look forward to in 2021
Lifestyle Asia
Here's where you can read the latest news and stories from Lifestyle Asia and our sister titles PrestigeOnline and Augustman, curated from all of our editions in Hong Kong, Singapore, Kuala Lumpur, Bangkok and India.
Luxury
Sign up for our newsletters to have the latest stories delivered straight to your inbox every week.