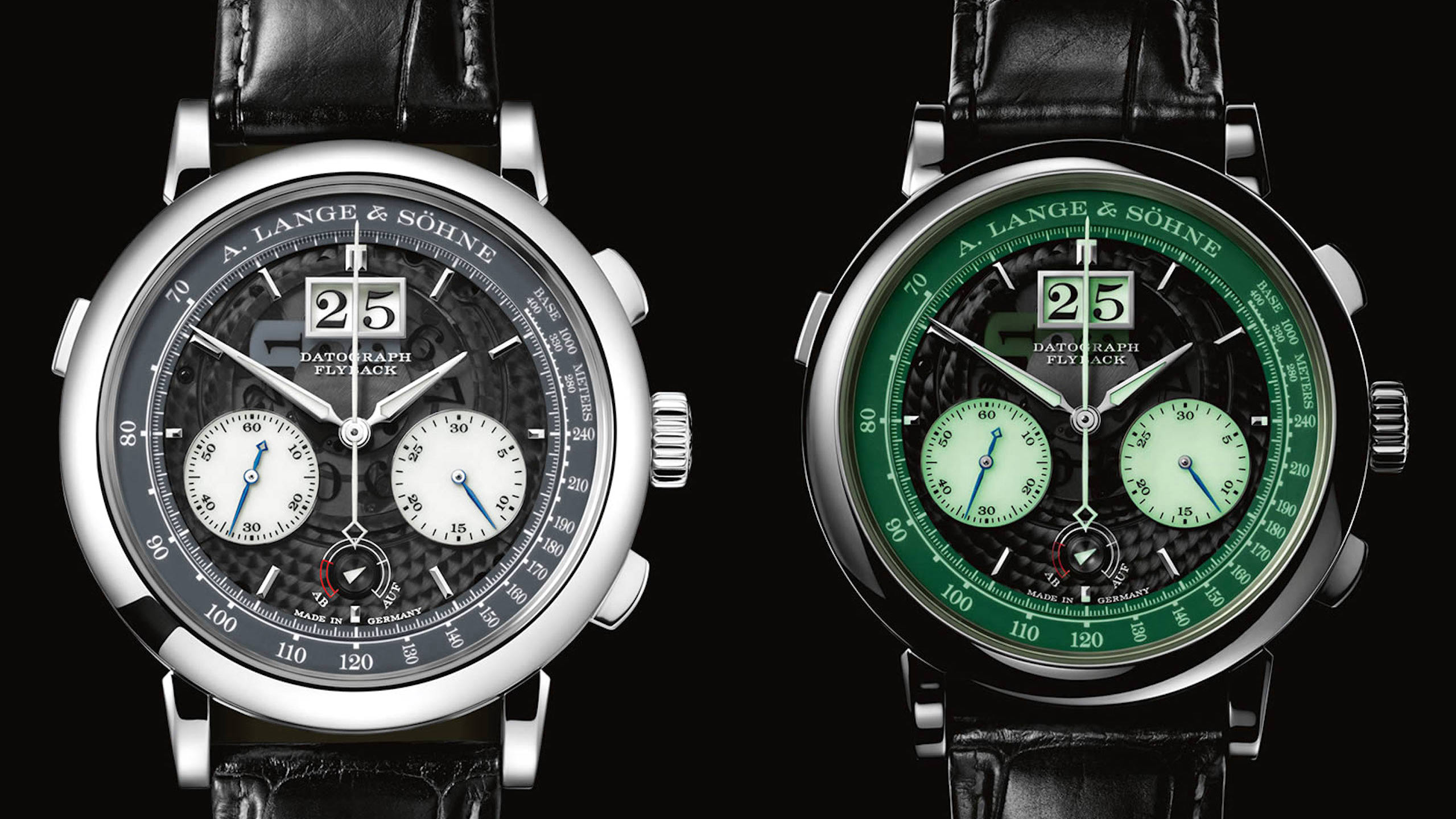 It’s fair to say that everybody at Phillips should probably be feeling pretty good about themselves. Earlier this spring, the auction house’s Asian watch specialists managed to move the entire catalogue for their thematic sports watch sale (held in association with Blackbird); reporting, for good measure, a 47 percent gain over Spring 2018. Not that Perazzi & co have much time to celebrate.
Phillips’ watch department is already gearing up for Hong Kong Watch Auction: NINE, one of the most closely monitored sales of the fall season. Over the course of two sessions (between 25-26 November) more than 300 timepieces, ranging from vintage Rolexes to modern Richard Mille, will be hitting the block at JW Marriott Hong Kong. The initial evening component (entitled ‘FIRST’) shall notably feature 50+ lots that are making their market debut — many of which boast intriguing provenance and truly excellent condition.

In the lead-up to the full catalogue’s announcement, here’s a peak at seven of our favourite lots from the upcoming sale.

Style
The A. Lange & Söhne Richard Lange Jumping Seconds is back in black 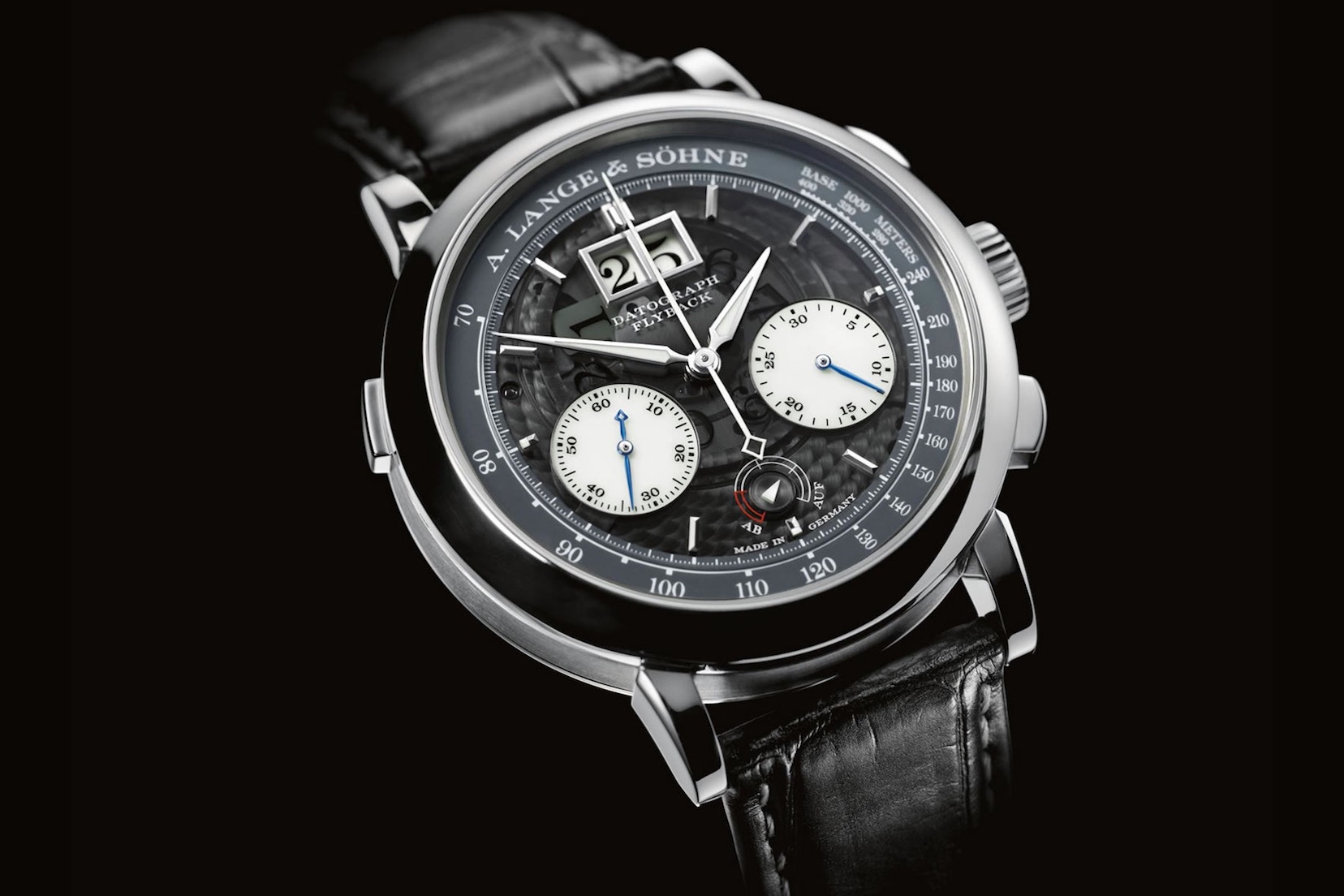 I’ve always thought of A. Lange & Söhne as a perennially underrated brand — makers of such mechanical marvels as the Zeitwerk and 1815 Chrono — but if the excitement around thoroughly modern pieces like this Datograph is any indication, we can expect to see a lot more of Saxony’s preeminent watchmaker in the near future.
Launched in 2018 as a riff on the classic two-register chrono of the same name, the distinguishing feature of the Datograph ‘Lumen’ is its translucent sapphire dial — enabling exhibition of the complex, intricately finished movement below. The tinted sapphire construction enables UV ray absorption, in turn causing various components on the dial (e.g. the tachymetre scale, outsized date, chronograph hand) to turn luminous at night — hence its name. The present example is numbered 91 (out of the Lumen’s original 200-piece run) and is being offered as a complete set in ‘like new’ condition. 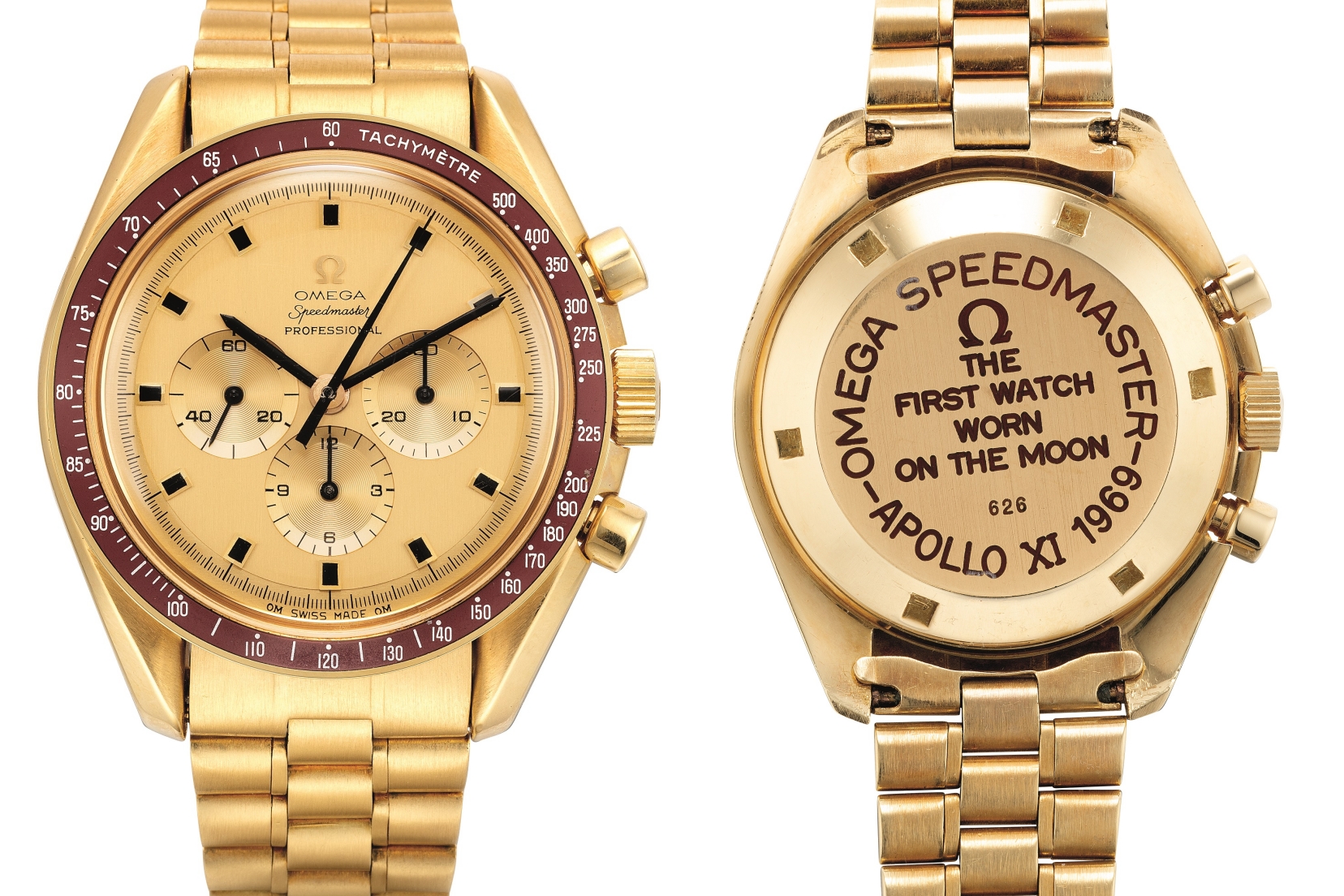 Initial estimate: HK$195,000–$350,000
LSA readers are bound to recognise the solid gold Speedy, as it’s a model we covered in some depth earlier this March. The original reference (BA145.022-69) from 1969 was a frequent sight during the Spring sales, and is, to me at least, a wonderfully paradoxical artefact — a chronograph by name, flexbomb in spirit.
The present example is one of 967 units (numbered between 33-1000) that were produced for public sale, and is accompanied by its original sales documentation in addition to a rare lunar crater presentation box. 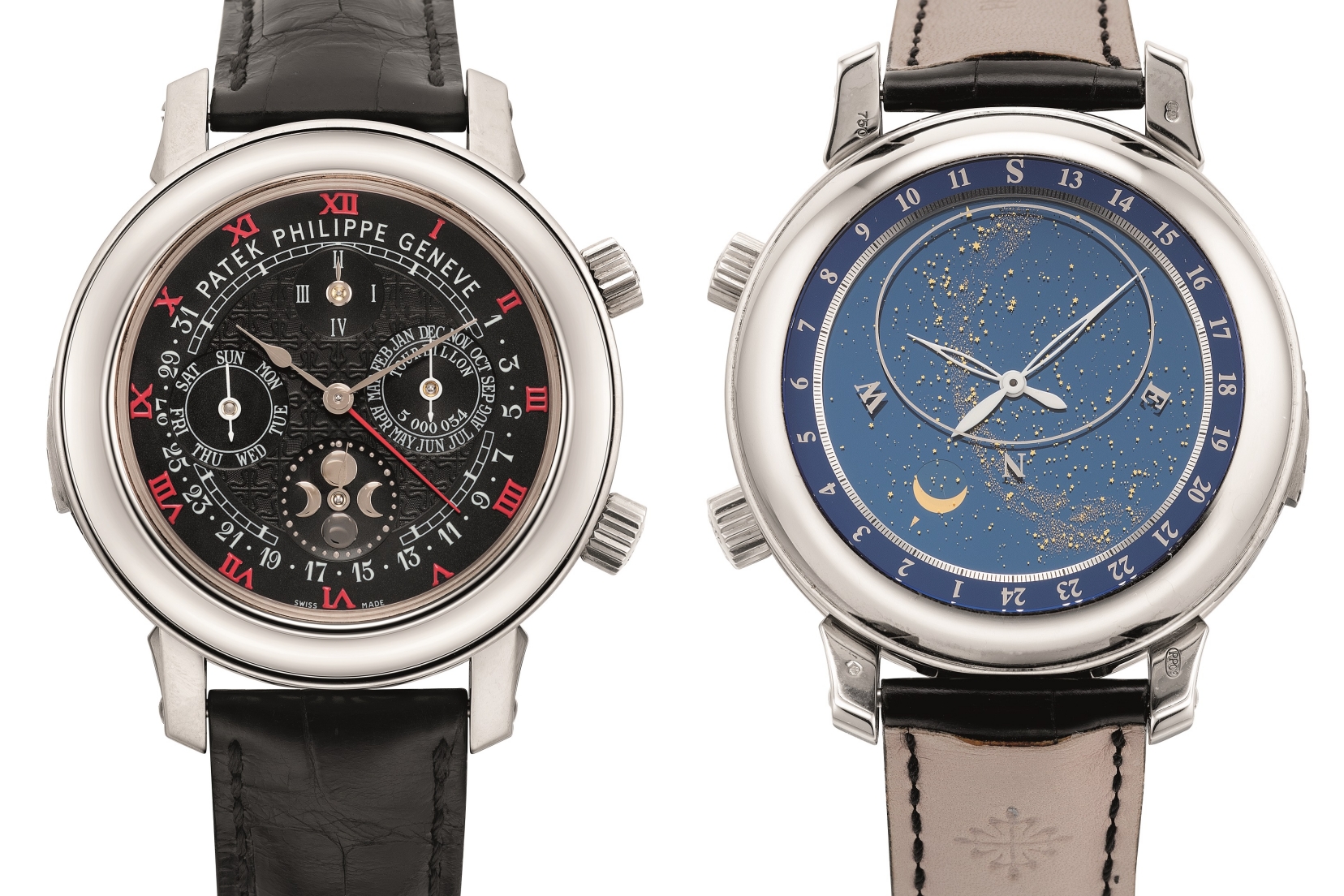 Described by Thomas Perazzi (Head of Watches, Asia) as “incredibly rare and most probably unique”, the Patek Philippe 5002G is already being hyped as the star attraction of Phillips’ evening sale next month. (It might be useful to recall that another example sold for HK$8,550,000 this Spring.) Colloquially known as the ‘Sky Moon’, the 5002G is an extremely complex, double-dialled wristwatch first produced in 2001 — inspired in aesthetic and functionality by the Star Calibre 2000.
Putting aside the fact that it incorporates a minute repeater, tourbillon, and perpetual calendar, this particular Sky Moon evinces an even higher degree of collectability. Whereas the majority of 5002Gs were produced by Patek with white front-facing dials, this is the first piece to feature a never-before-seen black execution. 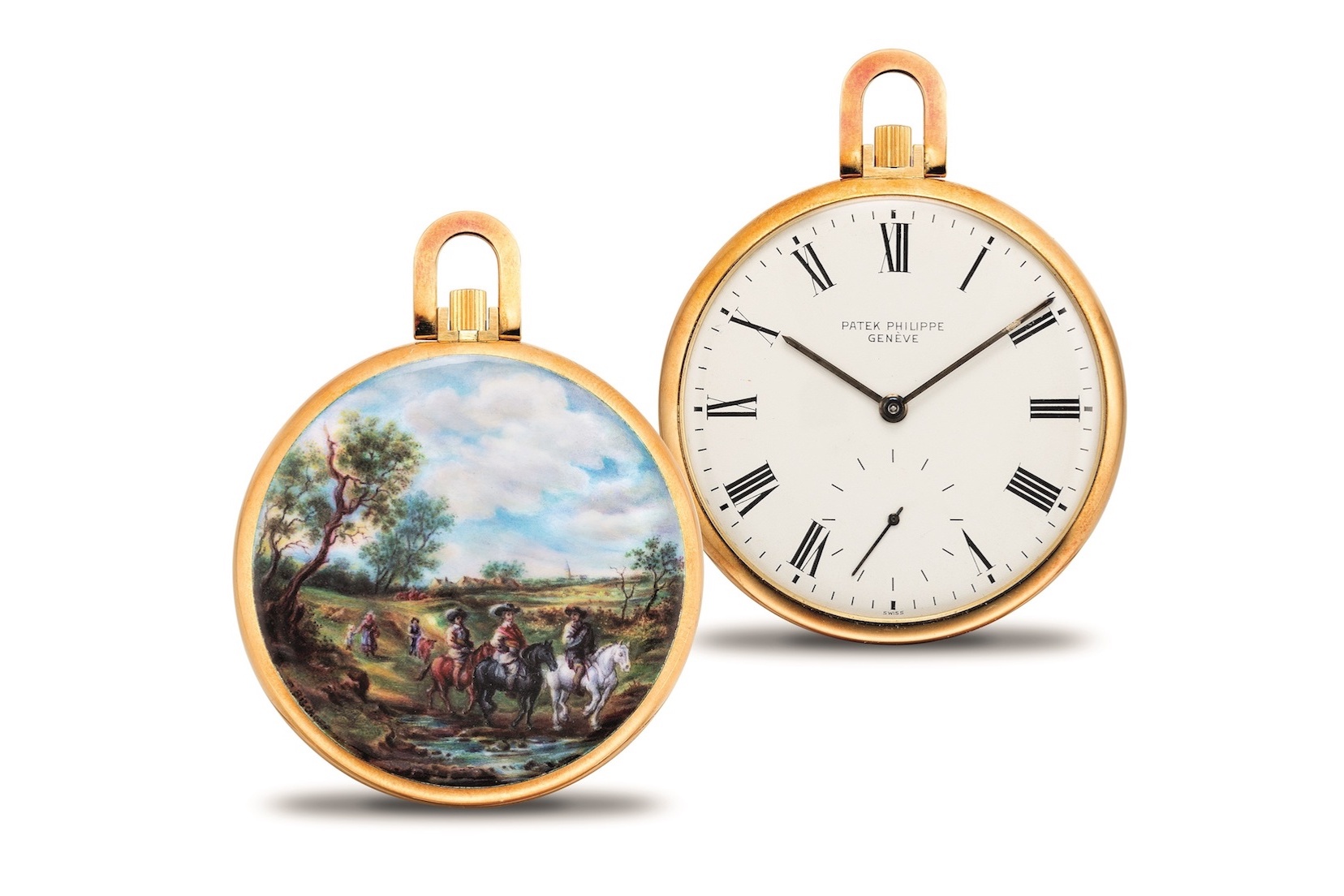 The uninitiated tend to think of pocket watches as a fairly niche category, though I find they strike a much better balance between decoration and mechanical complexity than most modern timepieces.
In the world of pocket watches — as in horology more generally — Patek Philippe is a name that carries serious clout. Beginning in the late 1960s, the manufacture enlisted a number of artists — among them Suzanne Rohr and Marthe Bischoff — to work on a small number of decorative pocket watches — most of which took at least six months to complete. The present example (an exceptionally well-preserved Ref. 866/2) was completed by Bischoff in 1975, featuring an enamelling of Salomon van Ruysdael’s Dutch Landscape with Raid. Rich in colour and detail, experts often associate this enamelling with the most outstanding period of Bischoff’s work. 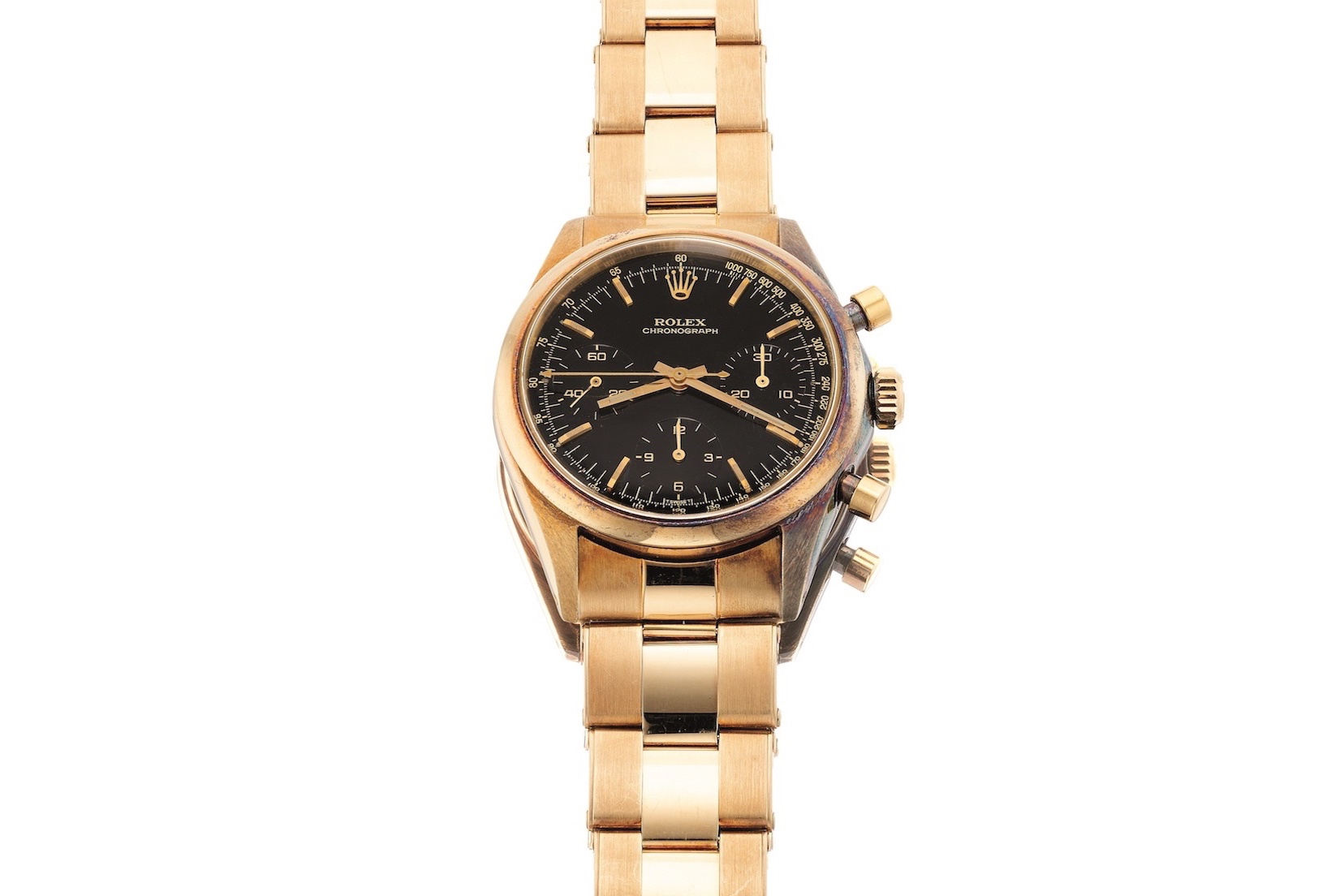 When it comes to the subject of Rolex chronographs, one must make a titanic effort to avoid buzzwords like ‘Paul Newman’ or ‘Daytona’. Which is a shame really, because the stuff that the Crown was producing in the preceding era was equally exciting. As purveyors of the most expensive Daytona ever auctioned, Phillips are doubtless aware of this; and are offering a historic “Pre-Daytona” reference that is — to use the phrase accurately for once — extremely rare.
Amongst the last chronographs to be produced before Rolex transitioned into the Daytona era, this Ref. 6238 is heavy with the kinds of details that are bound to get even the most seasoned collector excited. The watch is powered by the manual-winding calibre 72B (complete with a Valjoux ébauche for the chronograph) and features a case made in 14K gold, heavily oxidised along the pushers and right hand lugs. Furthermore, the majority of models in this reference were manufactured using silvered or matte dials — with the current example being one of only a handful to feature the ‘glossy’ treatment. 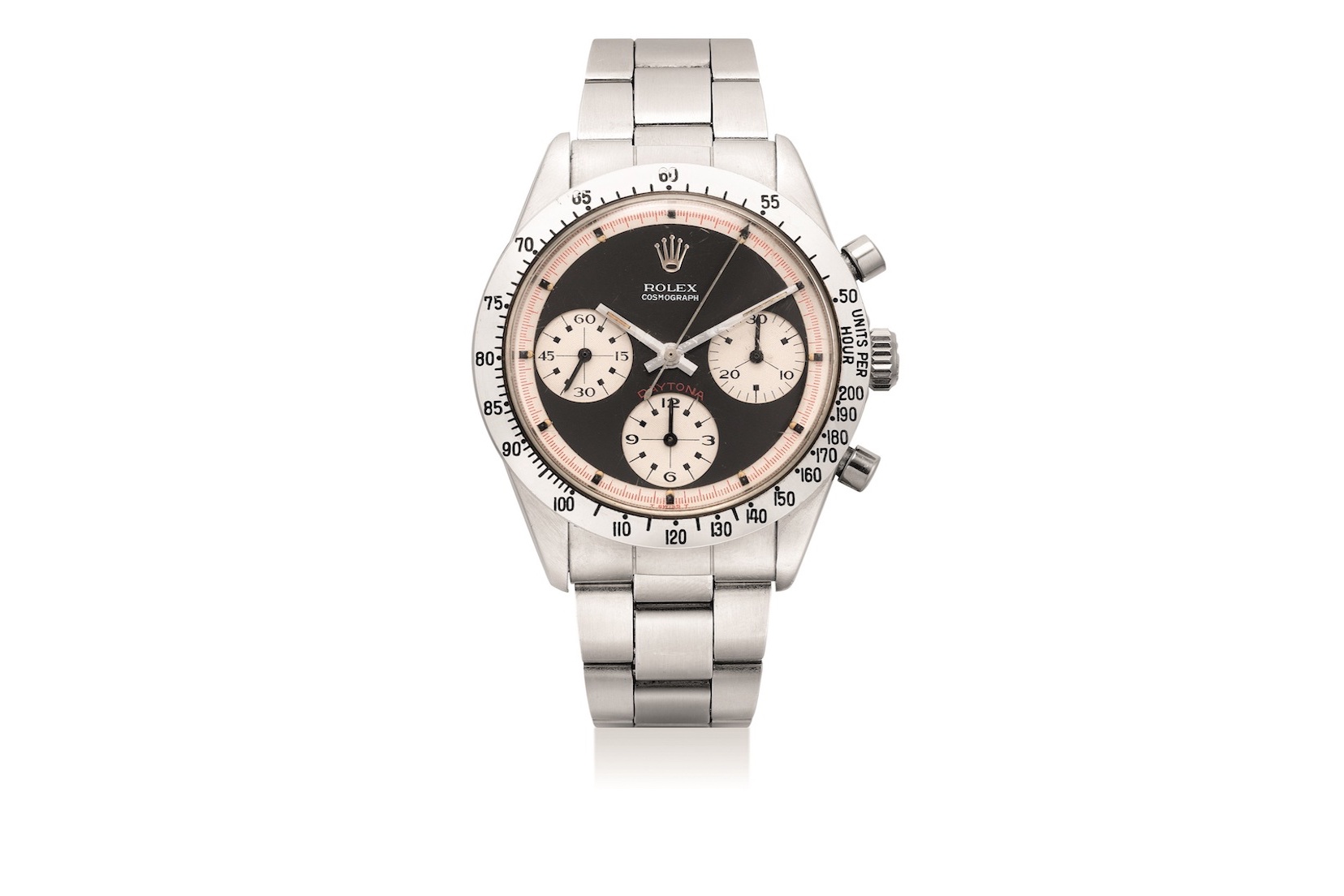 Panda dial? Pump or screwdown? Three-colour or ‘Double Swiss’? When it comes to Paul Newman Daytonas, specificity is key. For me personally: it’s all about the real McCoy, ergo, the Ref. 6239.
The reference favoured by Mr. Newman himself, this particular example is the most concise distillation of the world’s most infamous Rolex: sporting pump pushers; a steel tachymetre bezel; and three-colour dial. It’s certainly not the most expensive Paul Newman Daytona of this sale — that honour goes to a certain 6265, configured with tropical dial — but between the condition and truly incredible provenance (the only item the original owner managed to rescue from his burning house), it’s not hard to imagine it trumping original estimates. 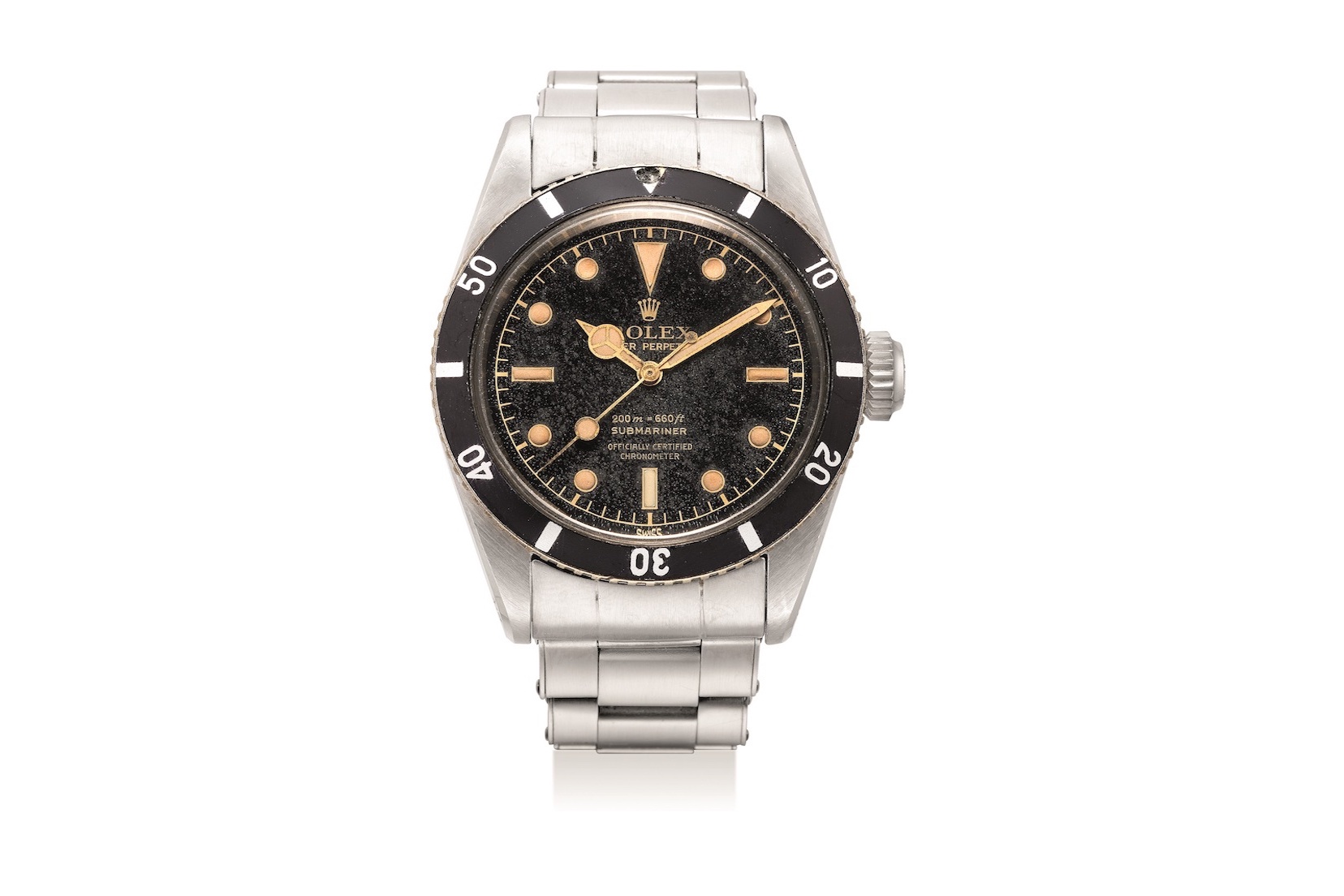 Even within a single reference, not all Submariners are created equal — something that’s handily illustrated when you consider the Ref. 6358.
Phillips specialists were able to date the present example to the second run of 6358 Submariners (manufactured sometime between July or September 1956). As with all vintage Rolex, the devil is in the details. Consistent for the period, this 6358 features a brass ‘no hash’ bezel; an early example of the now-characteristic ‘four line’ dial; and lume plots which have developed a beautiful creamy patina. It’s confirmed that this is one of only five 6358s to have resurfaced on the market with its original dial.

Ahead of Hong Kong Watch Auction: NINE, members of the public are invited to a preview of the 310+ lots scheduled to go on sale from 25-26 November. To learn more, visit Phillips online.