8 lots to keep an eye on going into Bonhams “Hong Kong Watches 2.0”

2018 was an extremely strong year for the watches division at Bonhams. Last November, the British auction house’s regional sales reached a whopping US$4.8 million — the partial result (according to numerous industry watchers) of strong interest from novice collectors. “More than 30 percent of bidders registering with Bonhams did so for the first time,” says Tim Bourne (International Director of Watches, Asia). “[It has] put us in a strong position to further capture the attention of the growing watch market in Asia and continue to offer a variety of high quality timepieces.” 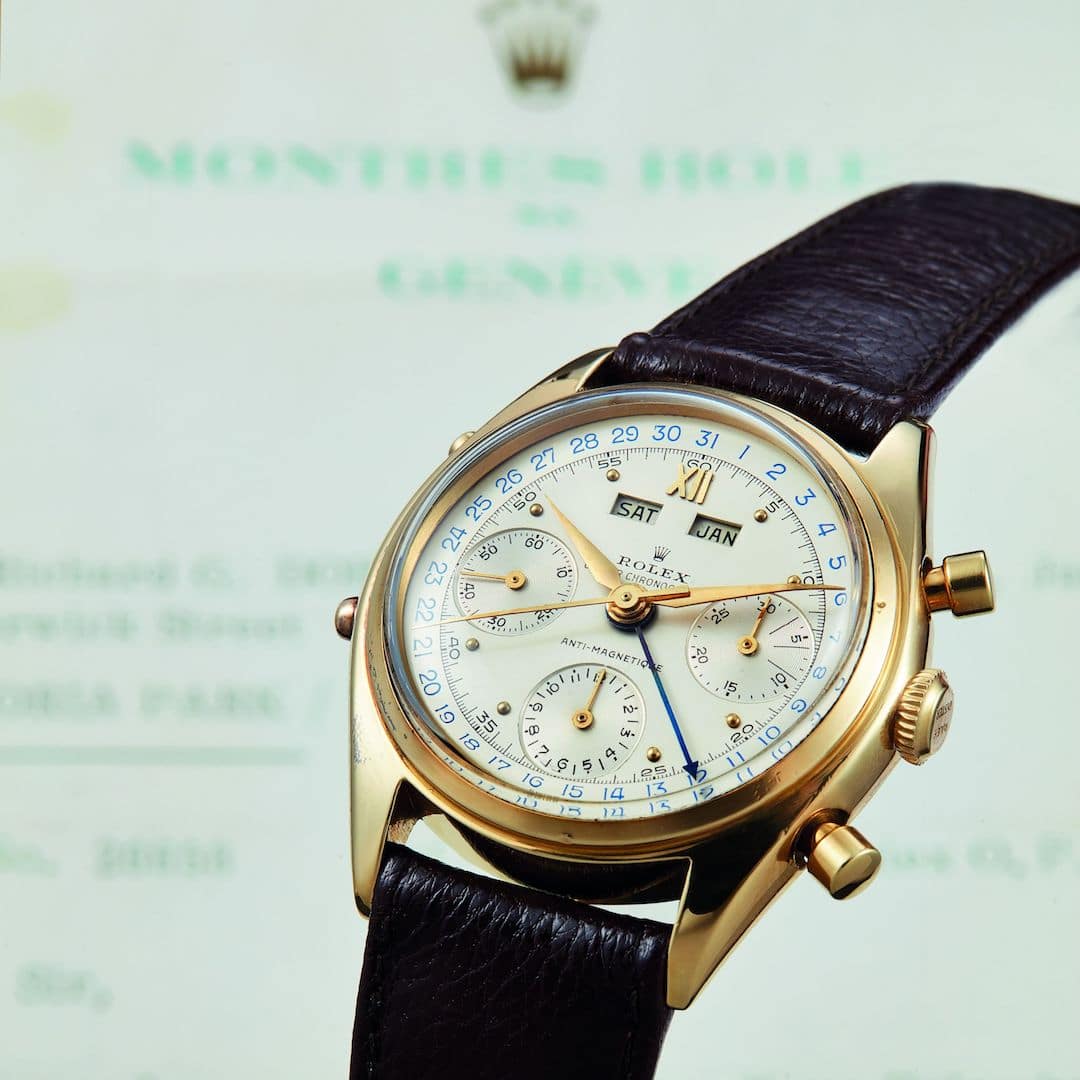 This year, in an effort to capture even more interest from the general public, Bonhams will be changing things up slightly. The house will commence its spring sales with an exhibition on 31 May entitled The Centennial Collection — comprised of over 1,000 watches, sourced from a single collector, that range in provenance from 1920 to the 2000s. A third of these will be subsequently sold at Hong Kong Watches 2.0 — slated to take place on 12 June with a total inventory of 500 lots. As always, we dropped in ahead of schedule to bring you an early look at what’s on offer: from the usual 7-figure suspects to watches which illicit exclamations of “why isn’t this a thing?!”, here are 8 lots to keep an eye on at Hong Kong Watches 2.0.

The importance of the Ref. 7753 Skipper — sometimes referred to as the “Skipperera” — cannot be overstated. It was among the first chronographs in this eponymous family to be produced by Heuer and exists in extremely scarce numbers (specialists estimate no more than 200 pieces). Immediately recognisable thanks to its teal, turquoise and orange registers — inspired by the 1967 America’s Cup — this particular exemplar marks the 20th time that a Skipper has resurfaced in public. Overall, it is in excellent condition: the lume plots remain extremely dense; while the sharpness of the faceting suggests it was worn on only a handful of occasions by its original owner.

This particular iteration of the A. Lange & Söhne Zeitwerk — a signature for the brand which uses a digital time display — was first released in 2014. Unlike previous versions incorporating the “striking time” complication, the current exemplar is made in a rare pink gold — the first of its kind to come to international auction. Unlike numerous Swiss watchmakers, Lange chose to incorporate the hammers (which strike the hours and quarters) on the dial; freeing up additional room on the caseback to view the exquisite calibre L043.2. As is customary for Lange, this manual-wind movement features the hand-engraved balance cock, striped argenté bridges and a dizzyingly complex gear profile that houses the watch’s constant-force escapement.

To the average person, this solid gold Longines (produced circa 1957) might seem a bit unassuming, but do a little digging and you’ll start to realise it’s an absolute gem of a timepiece — a living testament to the progression of chronograph design and technology throughout the 20th century. How so? For starters, like many chronos from the 50s, it incorporates both tachymetry and telemetry scales — an extremely useful combination for pilots flying in an era when navigational instrumentation wasn’t computerised. The calibre 30CH that beats within was among the first true “in-house” chronograph movements during the mid-century; and, to top it all off, the dial is in excellent condition (it exhibits only light graduated “spotting” under direct fluorescent light). Don’t let the suggested value fool you, this is one lot bound to exceed expectations and then some.

While Hong Kong Watches 2.0 promises plenty of affordable bidding options, it wouldn’t be a spring sale without the usual heavy hitters like this Ref. 5078 “Grand Complication”. Released by Patek in 2005 to supersede the previous generation of 33mm minute repeaters, the present 5078 features a rare platinum casing and white enamel dial. Beyond the usual characteristics that make this such a covetable lot (e.g. provenance, design, finishing) there’s a distinctive quality to the minute repeater chime: high-toned and mellifluous, it undergoes rigorous sound mapping in order to ensure maximum listening pleasure for the wearer, even subject to final approval by Patek President Thierry Stern.

If the preliminary marketing drive surrounding it wasn’t proof enough, allow me to reiterate — this 5539G is the star of Hong Kong Watches 2.0. Every single element of this now-discontinued reference is superlative: from the Breguet numerals to the spotless officer’s case and “so black it’s blue” enamel dial, the Ref. 5539G offers an immediate lesson in how to use sparing design to achieve lasting visual impact. And while it’s an undeniably elegant piece — full of mid-century charm — good looks are only the beginning of what makes this 5539G so special.

Astute viewers will note (above the 6 o’clock position) the “tourbillon” signature. Turn the watch over, and you’ll see the titular regulatory organ in action. Circling the opposite side of the movement, two intricately angled gongs chime the time on demand: sounding in hourly, quarterly and minute intervals. Estimates put this exemplar at an initial value of HK$2.3 million dollars; and while that’s steep, you’re likely to have better luck securing such a grand complication at auction — as opposed to through official channels.

As everybody and their pops knows, the Ref. 2447D Carrera is a timepiece that has achieved near-mythic status amongst chronograph collectors over the past five decades. The clean open dial — which heralded a departure from the traditionally busy configurations of 1950s racer watches — proved to be revolutionary, and has since gone on to influence everybody from Rolex to Zenith. That being said, even the most bare bones ’64 Carreras can cost over HK$120,000 nowadays, putting them slightly out of reach for enthusiasts who’ve just started building their chronograph collection.

Thankfully, TAG Heuer were aware of the demand for this iconic motoring design and in 1996 re-released it as the CS3140. The present example (in 18k yellow gold) is a good deal more approachable than its period-correct ancestor. Functionally identical to the latter — notwithstanding a Lemania movement — this is a great way to dip your toe into the world of vintage chronograph watches.

Not to be confused with the limited edition remake that OMEGA put out in March, this 1969 Speedmaster Professional is the genuine article. Signed number 510 of 1,014 — immediately outing it as a piece intended for the general public — this is the Speedy made to commemorate the success of the Apollo XI mission and build upon OMEGA’s reputation as spaceflight-qualified watchmaker par excellence. Sourced from The Centennial Collection, this particular example is in excellent condition. There are trace amounts of oxidisation on the lugs and bracelet, but even a cursory examination indicates the watch has spent most of its life virtually unworn — the caseband remains highly polished while all of the original dial elements are intact. Even if you’re not about to register for a paddle, this is one I definitely recommend you go and see in the metal.

Even a laymen is bound to recognise the significance of the Ref. 2526 — Patek Philippe’s first self-winding wristwatch. Part of the classic Calatrava lineage, the first 2526s were released in 1957, featuring the now seminal calibre 12-600AT. Scholars have since grouped this reference into four generations, although there are common characteristics across each: the dial is always “eggshell” enamel, indexes are inlaid and the small seconds are displayed above 6 o’clock. The present exemplar is from the third generation, made with a nearly flush screw down caseback — perfect for observing the movement in action.

The Centennial Collection will be open to the public from 31 May–12 June. For more information regarding Hong Kong Watches 2.0 (or for registration inquiries) visit Bonhams online.