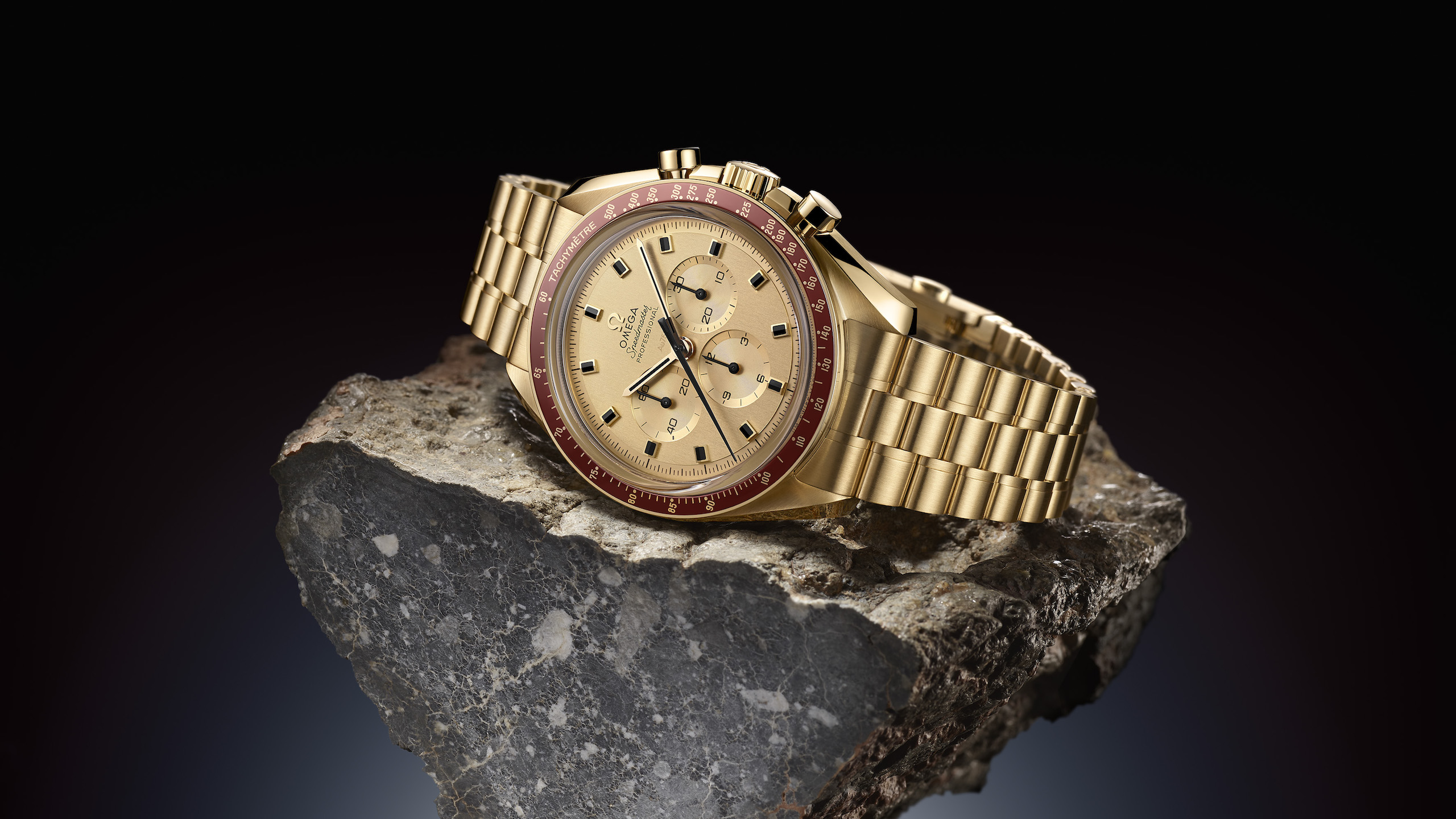 Thanks to the inescapable onslaught of social media, hype is a constant in today’s watch industry. Let’s face it: there’s only so many anniversaries and milestones collectors can get excited about before fatigue sets in, particularly when these events celebrate occurrences as mundane as the release of a new dial or strap colour. Fortunately for OMEGA, 2019 marks the 50th anniversary of a seminal historical moment that’s pretty much the antithesis of mundane. We are of course talking about the Apollo 11 mission — an event considered the high watermark of American achievement in space exploration, and the launchpad for one of the most influential chronographs in modern watchmaking — the Speedmaster Professional. For those tempted to skip to the end: yes, OMEGA did recently release a limited edition gold Speedy — based on a 1969 model intended for, amongst other historic figures, president Richard Nixon — but that’s only half the story. To better understand where a solid gold moonwatch made with modern movement technology fits into the overarching Speedmaster canon, it’s helpful to consider (in chronological order): the original Speedmaster Professionals that were flight-qualified and subsequently used by NASA on the moon; how the Speedmaster’s DNA has evolved over time; and what sets this new ‘Moonshine’ gold Speedy apart from its brethren.

Although spectators around the world would have to wait til July 1969 to become acquainted with the Speedmaster Professional — seen via grainy monochrome footage of Buzz Aldrin — the association between NASA and OMEGA began some five years earlier. Deke Slayton, NASA’s Director of Flight Crew Operations, issued a call to watchmakers around the world for a timepiece which could withstand the fatal conditions of outer space. The Speedmaster managed to outperform its competition across 11 different criteria, boasting superior anti-vibration, thermal resistance, shock absorption and more — in fact, as of 2019 it’s still the only watch to be EVA-qualified by NASA, certified for use outside the protected confines of a spacecraft cabin. By 1969, it was already widely issued amongst NASA personnel, with notable models including the ST 105.012 and ST 145.012 — two references worn by the crew of Apollo XI.

Even before the moon landing, the Speedmaster had been a vital piece of equipment for astronauts under the Mercury, Gemini and Apollo programs. NASA’s manned spaceflight missions have always been conducted in accordance with an extremely regimented checklist, and the Speedmaster fulfilled the role of a backup timekeeper and computational aid. It’s also been used in a number of surprisingly personalised applications: General Charles Duke, the pilot of the Apollo 16 lunar module, used his to time rocket engine firing sequences down to the second; while Lieutenant General Thomas Stafford, commander of Apollo 10, is known to have carried two Speedies, one of which told the ‘Mission Elapsed Time’ and the other, the hour on the ground in Houston.

A living legacy of design & technology

Generally speaking, the overall design of the Speedmaster hasn’t changed much since the 60s — there’s a reason why it’s considered an icon in the world of watchmaking. Nevertheless, over the years OMEGA have made a number of incremental changes which have allowed the Speedy to exploit the brand’s innovative work in the mechanical and material engineering space.

Like most mid-century chronographs, the original 1957 Speedmaster was intended for auto-racing. This early model was characterised by ‘broad arrow’ hands and a steel-coloured tachymeter. Its most desirable attribute however, amongst a certain kind of chrono enthusiast, is the movement — OMEGA’s seminal calibre 321. Extremely important within the wider history of mid-century watch design, calibre 321 is perhaps the quintessential column wheel chronograph movement — equipped, rather topically, in the Speedmasters worn aboard Apollo 11. OMEGA discontinued the calibre in 1968 but, after much imploring from collectors, announced it would re-enter production in 2019.

Two years after the first Speedies were released, OMEGA began production of the CK 2998. This reference was crucial to developing several of the established design queues we still see in modern Speedies: the previous steel-coloured bezel was replaced with black aluminium; and the ‘base 1000’ tachymetre was gradually phased out in favour of a scale beginning at 500. While this particular reference was never officially flight-tested by NASA, as the first ever OMEGA worn in space it is a spiritual precursor to the ST 105.012.

The Speedmaster’s first well-documented association with NASA is embodied in the ST 105.003 — introduced in 1964, it was the first timepiece to successfully undergo all 11 environmental tests developed by the Apollo program office.

Between 1964-1967, the Speedmaster underwent a further period of rapid development — culminating in the creation of a design language that has remained more or less unchanged for the last 40 years. By 1967, references such as the ST 145.012 were including the now-standard ‘twisted’ lugs, dials configured with baton hands and asymmetric cases designed to offer added protection to the crown and pushers.

The Speedy’s first major technical upgrade came in 1968, with the release of the ST 145.022. This reference was powered by the new calibre 861: an iterative chronograph movement which evolved out of the desire to improve the calibre 321’s precision and consistency. This was achieved, in part, by replacing the chronograph column wheel with a shuttle cam and manufacturing the brake with lower-friction polymers instead of steel.

There’s a strong through-line between the 1968 Speedmaster and the one fans know today. Visually, the two are more or less identical, with the latter building on the groundwork laid in the late 60s. From 1997 onwards, the previous movement was phased out in favour of the calibre 1861 — like the 861 before it, the newer movement made use of a shuttle cam system, low-friction Delrin brake and was manufactured with rhodium-plating for greater stability.

Celebrating 50 years of exploration (with a drop of moonshine)

Moonwatch purists can rest easy knowing that the historically accurate stainless steel Speedy (sporting the calibre 1861) remains a mainstay at retailers around the globe, but for the 50th anniversary of Apollo 11 — no matter how you slice it, half a century is a long time in any industry — OMEGA had to pull out all the stops, and what better way to do that than with a release that is equal parts fan service and material innovation?

Quick side bar: this new limited edition is based on the BA145.022, a solid gold vintage Speedy produced in a run of 1,014 pieces. Following the successful completion of the Apollo 11 mission, the first two were offered to U.S. President Richard Nixon and Vice President Spiro Agnew. (Both declined on account of laws prohibiting government officials from receiving gifts) Among a number of other allocations, a further 34 were given to an assortment of NASA personnel.

From a technical perspective, this reference has a lot in common with the Moonwatch in usage at this time: both measure 42mm, feature an asymmetric case profile, and are powered by the calibre 861. While it isn’t exactly a reissue, OMEGA’s ode to the OG gold Speedy closely follows the look of the original, though the technology used within its movement and metal are altogether new.

The first thing you’re likely to notice about the new solid gold Speedy is how much blonder it is than the BA145.022 (see the comparison image above). Within the industry at large, we’re seeing substantial experimentation with traditional metals, and OMEGA’s new ‘Moonshine’ gold is the latest illustration of that trend. Like Sednagold, this is a proprietary alloy developed exclusively for the brand: the composition is heavy on palladium, conferring enhanced resistance to discolouration and a pale hue on the metal.

OMEGA took a similarly high-minded approach to the movement. Unlike many modern Speedy references, which are powered by the calibre 1861, this new limited edition utilises the cutting-edge calibre 3861. In comparison to previous Speedmaster movements, the 3861 is extremely ornamental: Moonshine gold is used throughout the bridges and main plate; while the total number of jewels has been increased from 18 to 26 (according to OMEGA these were needed to ensure regular operation of its patented co-axial escapement). On the performance front, the 3861 is essentially a manual-wind take on the previous gen 1861, loaded with all of the performance aspects you’ve come to associate with METAS certification (you can read about the brand’s punishing in-house chronometer certification process above).