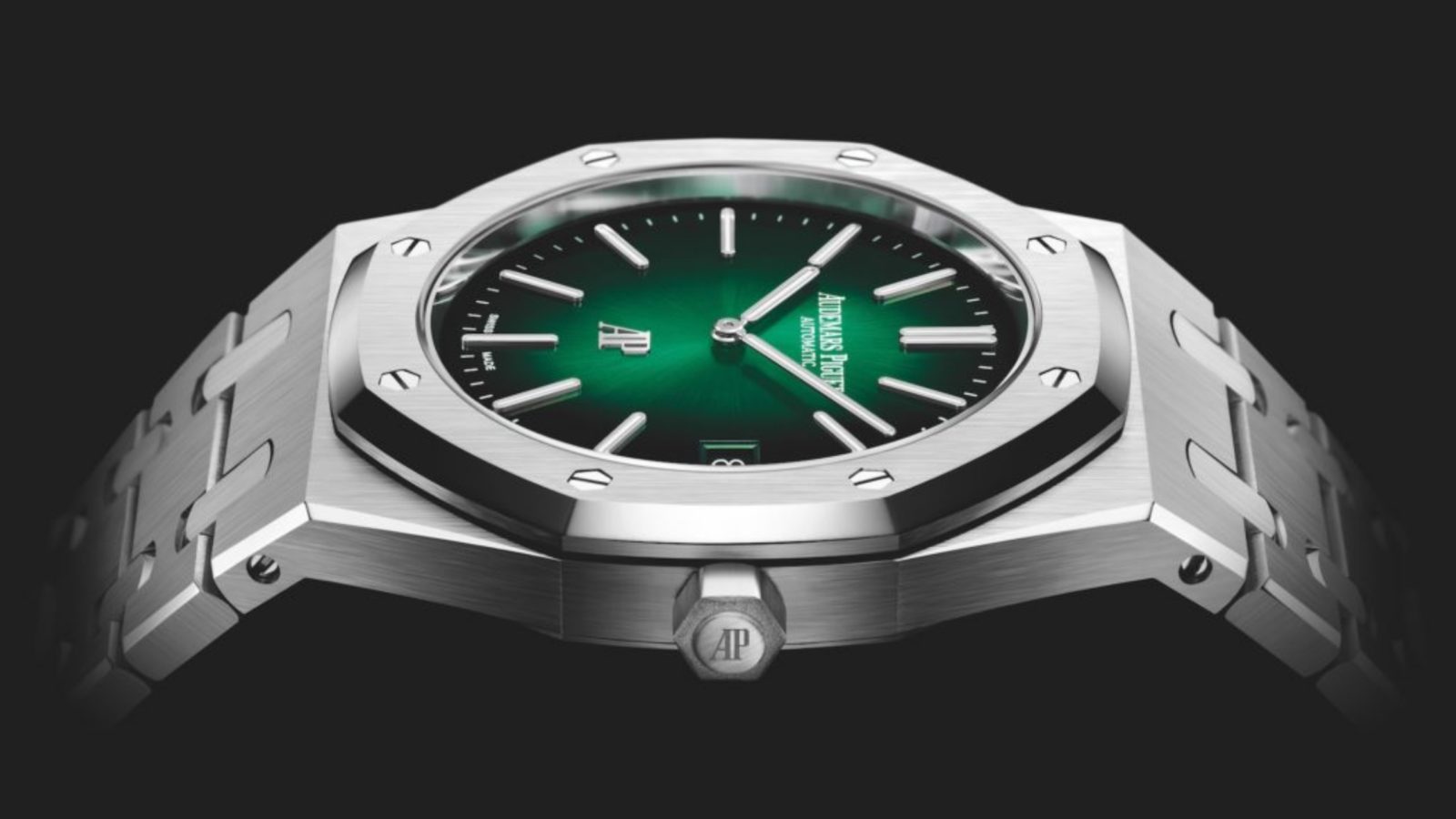 The octagonal bezel on Audemars Piguet’s Royal Oak pushed limits upon its release close to half a century ago; today, it’s the mark of an icon.

In 1972, its Royal Oak — designed by the legendary Gerald Genta, no less — became the first luxury steel sports watch to hit the market. The story goes that on its release, the watch and its unique octagonal bezel weren’t well received — except it actually was. Despite the fact that the Royal Oak was born into the Quartz crisis in its early years, the manufacture managed to grow, leading one to believe that it might’ve had something to do with this success.

By 1977, Audemars Piguet started offering it in white and yellow gold, raising the standards and kickstarting what would be a revolution in the industry. Fifty years since its debut, the firm’s lodestar watch continues to excite collectors with its ingenuity and pure class.

If you’re finally in the market for one, there’s good news. The manufacture has pushed the icon back into the spotlight again this year, unveiling more than a handful of new iterations that are bound to tempt even the most discerning of collectors. To sweeten the deal, these new timepieces also come equipped with new movements, fresh designs and a whole lot more attitude.

Here are the best Audemars Piguet Royal Oak watches to set your eyes on this year. 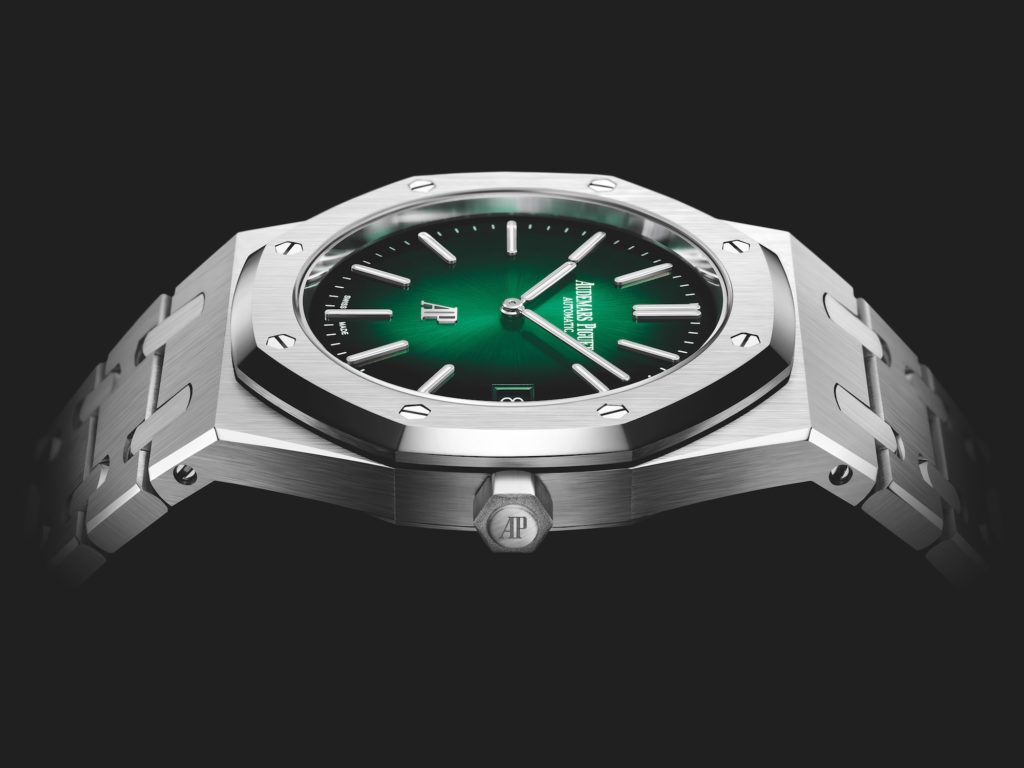 Audemars Piguet jumps on the green dial bandwagon here with the Royal Oak “Jumbo” Extra-Thin, this time swapping out the classic Tapisserie dial with a beautiful smoked green sunburst one instead. The 39mm timepiece comes clad in a full 950 platinum case, which makes it the first to sport this particular configuration, but manages to balance that heft by keeping the watch at only 8.1mm thick.

This dressier take on the Royal Oak is paired with the self-winding Manufacture Calibre 2121, which powers the hours, minutes, and date to make for an extremely sleek and elegant take on the classic. 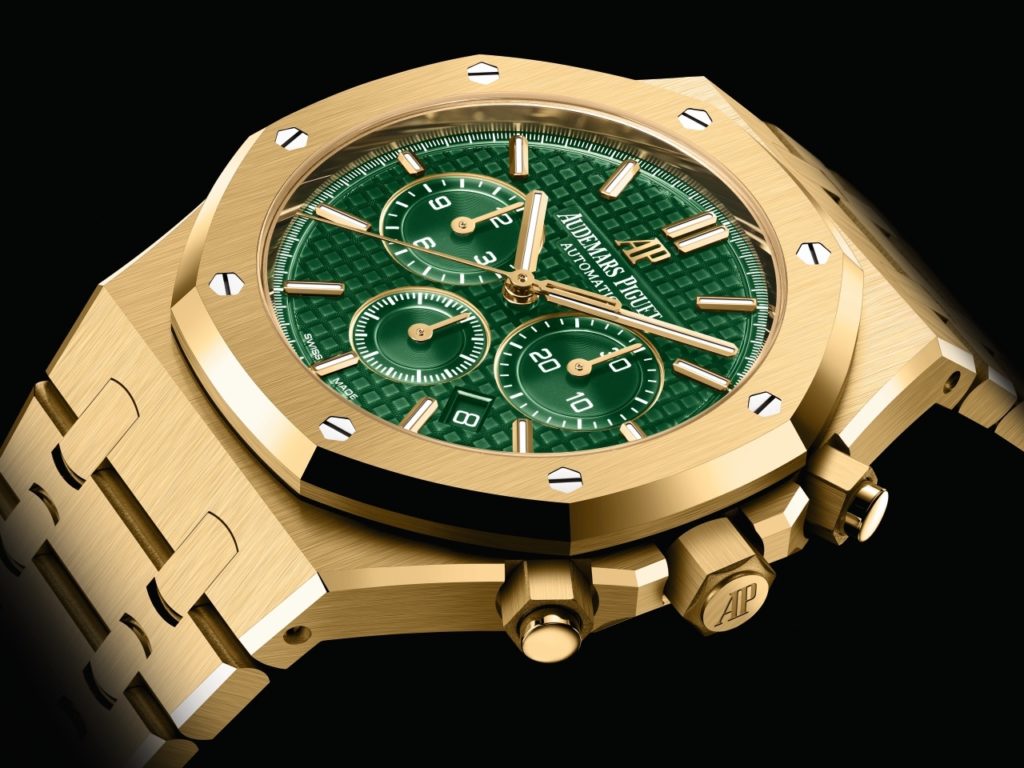 If you’re looking to kick it up a notch with the green though, the Royal Oak Selfwinding Chronograph is now offered in a new colourway: An 18-carat yellow gold case with a green Grande Tapisserie dial. Housed within a 41mm case, this watch is powered by the selfwinding Manufacturer Calibre 2385, which besides the chronograph function also powers the hours, minutes, small seconds, and date.

Its distinctive three snailed counters aside, the flashy 41mm watch also proudly presents the “Audemars Piguet” name on the dial in 24-carat gold, as well as a “Limited Edition” engraving on its solid caseback. Only 125 pieces of this timepiece will be made. 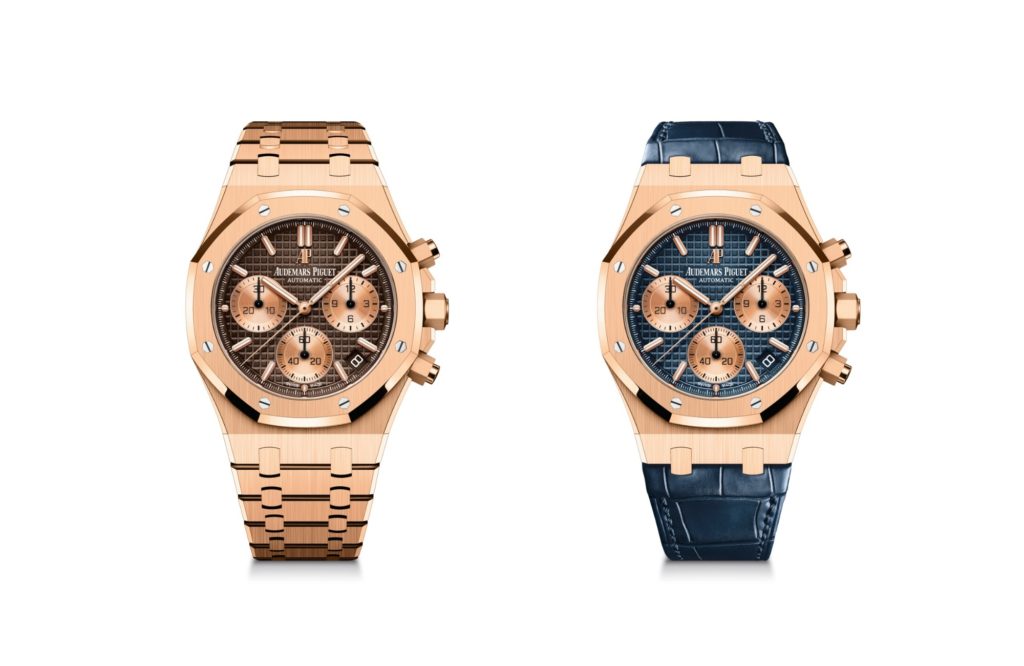 For those who want flashy but prefer to stick to less flamboyant options, the Swiss manufacturer also unveiled the sporty 41mm timepiece in an equally eye-catching 18-carat pink gold.

If its Calibre 4401 here sounds familiar to you, it’s because it was first used within the Code 11.59 collection in 2019. This is the first time the integrated chronograph is used in a Royal Oak, wth a flyback function that enables the restart of the chronograph without stopping or resetting it first. A patented zero resetting mechanism also ensures that each one of the counter hands instantaneously resets to zero. For the first time ever, this movement has been made visible via a sapphire caseback too.

On both the blue- and brown-dialled versions, you’ll find the positions of the minute counter and hour counter have been reversed for better readability. Swapping the 18-carat pink gold bracelet with its colour-coordinated alligator strap can take this chronograph from sporty to dressy instantly. 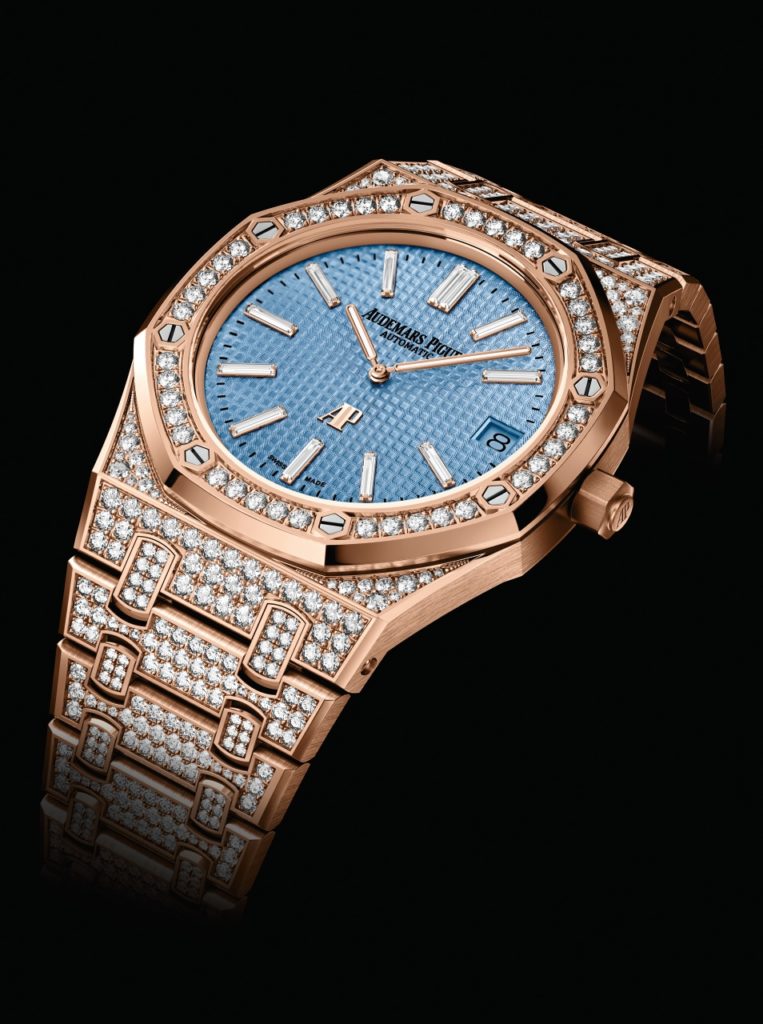 If your liked your Royal oak flashy, Audemars Piguet has three new diamond-set versions of the Royal Oak “Jumbo” Extra Thin. These iced-out versions comes in either 18-carat pink gold or white gold, but most importantly, it’s clad in 1,102 diamonds on its bezel and bracelet.

Whichever material you choose, the dials of these 39mm watches come with a Petite Tapisserie dial — either in light blue or black — with co-ordinated lumed Royal Oak hands. At the back, the Calibre 2121 is visible via a glare-proof sapphire caseback, with a hand-finished 22-carat gold oscillating weight that steals the show with both Clous de Paris and satin-brushed details. 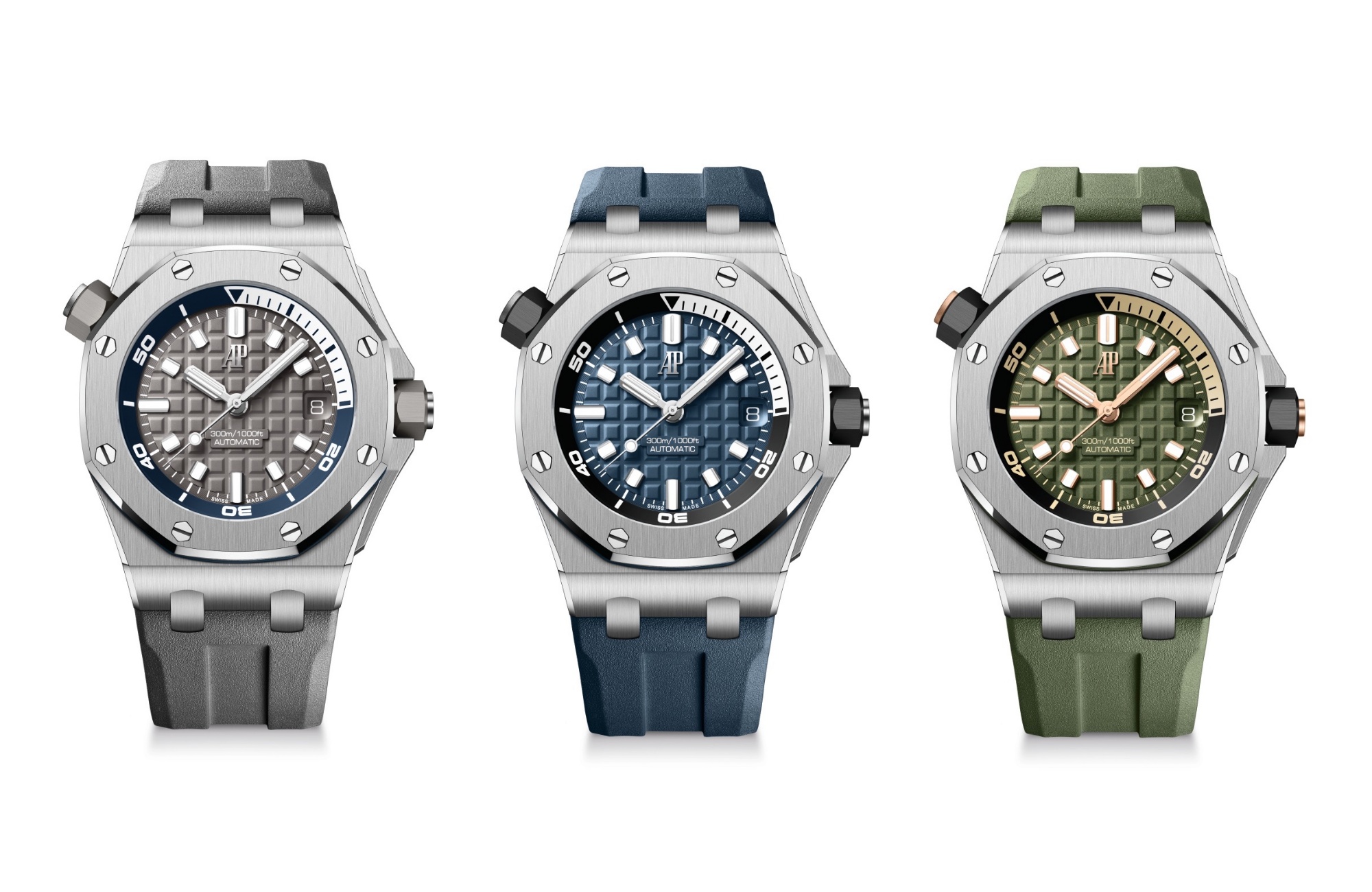 With demand for stainless steel watches at an all-time high, it’s little surprise that the new Royal Oaks also come in the popular material. The latest stainless steel Royal Oak Offshore Diver is available in khaki, blue or grey, and has been upgraded not only with new dial aesthetics and interchangeable strap system, but also a new movement.

The Calibre 4308 is an automatic movement with second and instant-jump date indication. As a true diving watch, these are good for underwater adventures up to a depth of 300m. There’s also a scale on the dial’s inner rotating ring that’s activated with a unidirectional click linked to the crown at 10 o’clock. A respectable power reserve of 60 hours ensures you’ll always have enough juice for all your expeditions.

Even if most of your adventures are on land, you’ll find this watch has plenty of mileage, especially on the style front. The new interchangeable strap system enables you to swap out the straps and buckles with a quick click and release to match your outfits. Expect rubber straps in green, blue, and black, and calfskin leather straps in more neutral hues of beige, brown, and black. 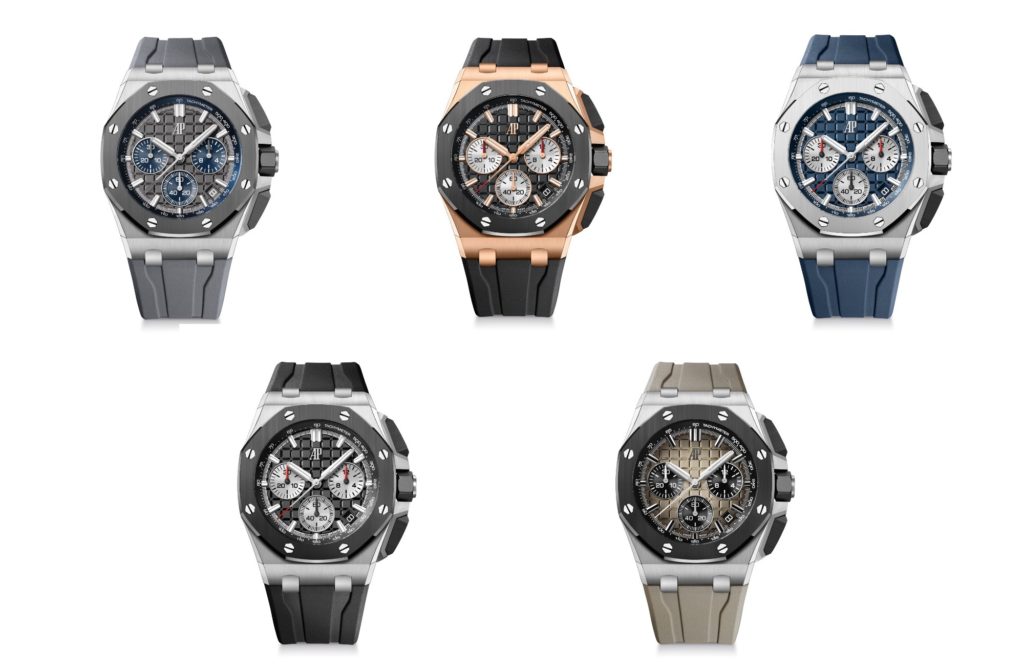 The five new models this year come in stainless steel, 18-carat pink gold or titanium, but more importantly, represent the first redesign of the model since the 44mm versions were launched in the early 2000s.

For one, you’ll notice that the “Méga Tapisserie” pattern adorning the dial — available in black, grey, taupe and blue — now offers even more contrast and depth. The chronograph counters have also been re-arranged; the minute counter now appears at 9 o’clock, while the hour counter at 3 o’clock for better legibility. Eagle-eyes fans will also notice that the date window has been moved closer to the inner bezel between 4 and 5 o’clock. Completing the dial is the new Royal Oak Offshore logo, which sees the applied gold AP initials at 12 o’clock, sans the long-form signature.

Inside, the Manufacture’s latest in-house integrated chronograph, the Calibre 4401, takes centre stage. Like the pink gold Royal Oak Self-Winding Chronograph 41mm mentioned above, this movement has a column wheel and flyback function that makes using the chronograph a cinch. Of course,  you’ll be able to view all these from the caseback, including components usually hidden from view such as the column wheel and the “dance” of the chronograph hammers.