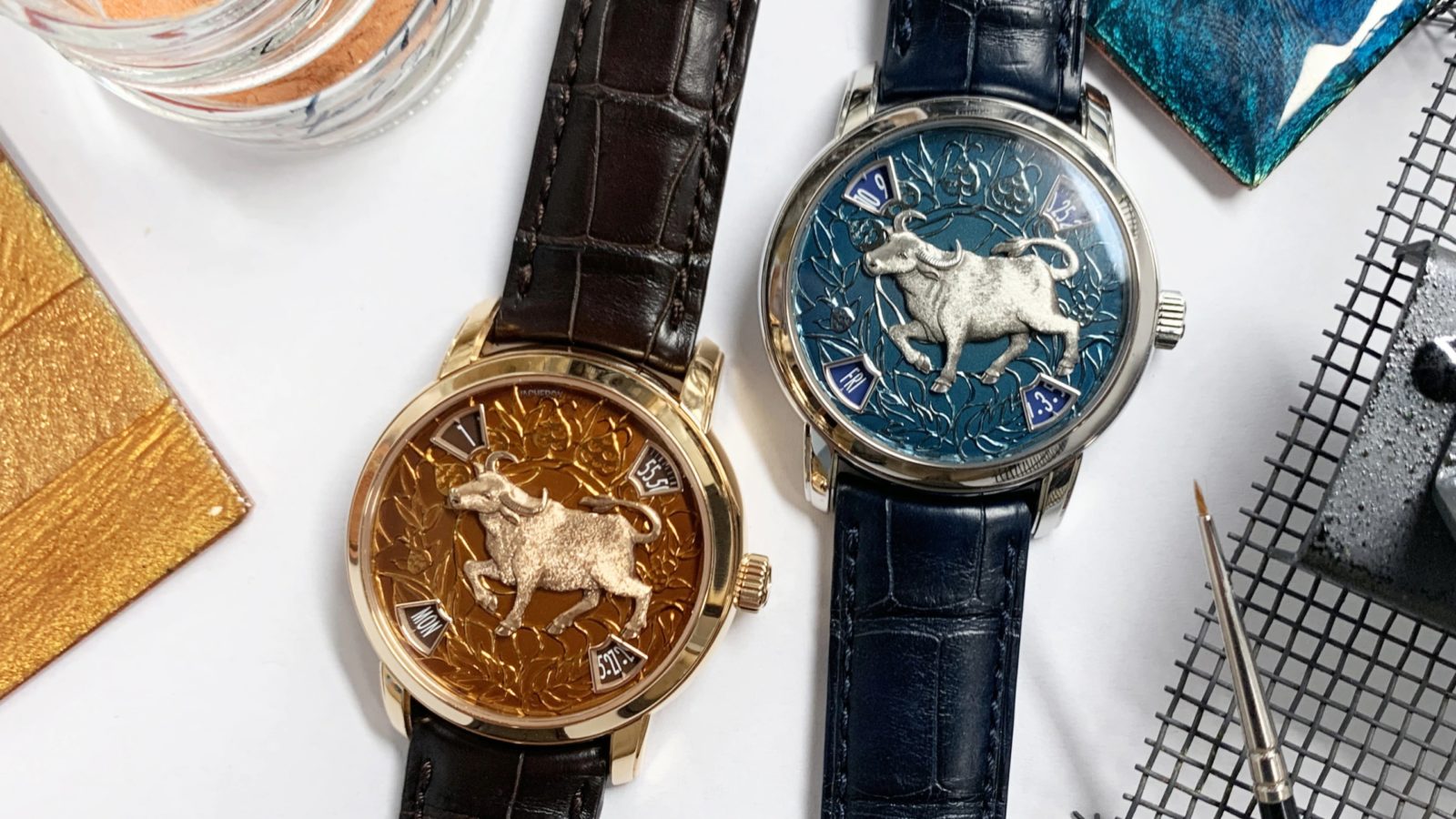 Usher in the Year of the Ox with these exquisite watches

We’re less than a month away from the zodiac handover on 12 February, and dare we say: We can’t wait for the Year of the Ox.

After all, the second animal of the 12-year zodiac cycle has plenty of traits we could use right now: Its reputation for persevering in the face of adversity being its biggest virtue, but also its abilities to remain rational and hardworking. Together with its element — this year’s metal — the ox’s qualities are said to be even stronger than ever, so if you needed any more motivation to finally attain those goals and achieve your dreams, let this be the sign.

From Harry Winston’s diamond-encrusted timepiece to Chopard’s Urushi-lacquered creation, here are the best limited-edition Year of the Ox watches we can’t wait to usher in Chinese New Year with. 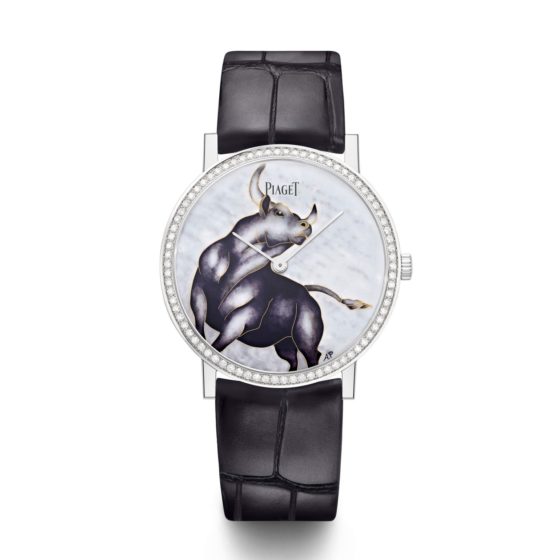 Piaget's Altiplano Year of the Ox

It comes as little surprise that the Altiplano would be the choice timepiece for Piaget’s Year of the Ox special. Decorated by celebrated artist and enameller Anita Porchet, the watch’s Grand Fleu cloisonné dial depicts a strong, muscular ox via wafer-thin gold ribbons, in which the different enamel pigments are then placed. Each dial is then fired in a kiln multiple times before it’s varnished, sealing in the image of strength and resilience.

This ultra-thin 38mm timepiece comes in an 18k white gold case that’s encrusted with 78 brilliant-cut diamonds, and is powered by the brand’s exceptional 430P hand-wound movement that measures a mere 2.1mm in thickness. We couldn’t have a list without this zodiac staple. Vacheron Constantin continues its penchant for creating Métiers d’Art collectibles once again by expanding its The Legend of the Chinese Zodiac to include the Year of the Ox. Set against an intricately etched foliage motif is a hand-engraved ox in platinum or pink gold, with Grand Feu enamelling throughout that gives the watch its intense blue or bronzed tone.

Both versions are limited to 12 numbered pieces each, and are powered by the Calibre 2460 G4, which showcases the hours, minutes, day and date in four apertures around the dial. 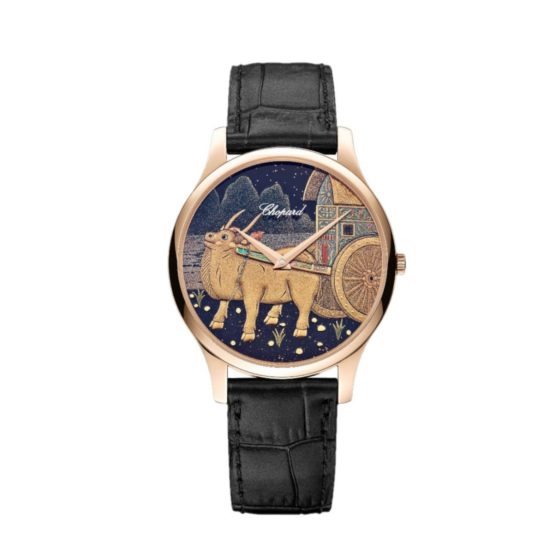 Chopard continues its Chinese New Year collectors’ edition with its ninth iteration, and, as usual, does an exceptional job at translating the zodiac’s best characteristics via solid craftsmanship.

The scene, which is “evocative of ancestral toil, humble prosperity and timeless elegance,” is brought to life via urushi lacquer — a unique combination of lacquer and gold powder — by master lacquer artist Minori Koizumi in the century-old workshops of Japan’s Yamada Heiando company. Within the 18k rose gold timepiece is the automatic caliber L.U.C 96.17-L, which runs the show with a 65-hour power reserve. The 39.5mm Chopard L.U.C Urushi Year of the Ox is limited to 88 pieces. The ox might be known as a beast of burden to many but Harry Winston chose to shine the spotlight on the animal’s majesty instead. Set against a red mother-of-pearl dial with two different finishes — naturally iridescent at the top half and etched with a landscape at the bottom — the 18-karat rose gold ox is further accentuated with 103 brilliant-cut diamonds.

The brilliance doesn’t stop there; time is indicated in hours and minutes using an off-centre diamond-studded ring, as well as a single large emerald-cut — Harry Winston’s favourite shape — diamond at 12 o’clock. Even the red alligator strap sees a buckle set with 17 brilliant-cut diamonds, totalling the diamond count to just about 2.80 carats. Only eight pieces of this auspicious timepiece will be made, with its numbered edition engraved on its transparent sapphire case back. 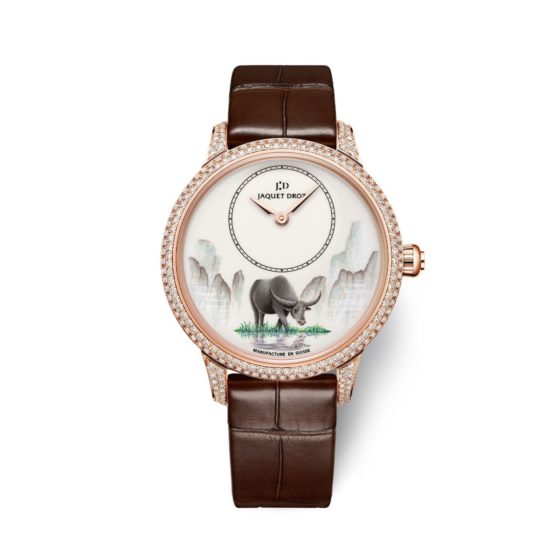 Jaquet Droz joins in the celebration with not one, but four ox-themed timepieces this year. It is, after all, a big occasion for the brand, especially since it’s been fostering relations with the Chinese imperial court as early as 1774.

Its first two are 18k red gold collectibles in two sizes: 35mm with diamonds and a 41mm without. On those, an ox grazing against a backdrop of mist-covered mountains is miniature-painted on a white grand feu enamel dial, and showcases the animal’s reliable and calm nature.

The other is available in white or red gold, and shows an ox engraved in gold relief against a pitch-black onyx dial. Behind him sits a gold plum tree filled with an abundance of rubies, signifying the harmony between humans and nature, as well as bravery and victory. Each of these four handcrafted compositions will be released in a series of eight.

Find out more
Style Luxury Timepieces Limited Edition Watches Chinese New Year 2021 new watches 2021
You might also like ...
Culture
Game on this Chinese New Year with these luxurious Mahjong sets
Living
Off-White’s limited-edition Chinese New Year Home collection is here
Lifestyle Asia
Here's where you can read the latest news and stories from Lifestyle Asia and our sister titles PrestigeOnline and Augustman, curated from all of our editions in Hong Kong, Singapore, Kuala Lumpur, Bangkok and India.
Luxury