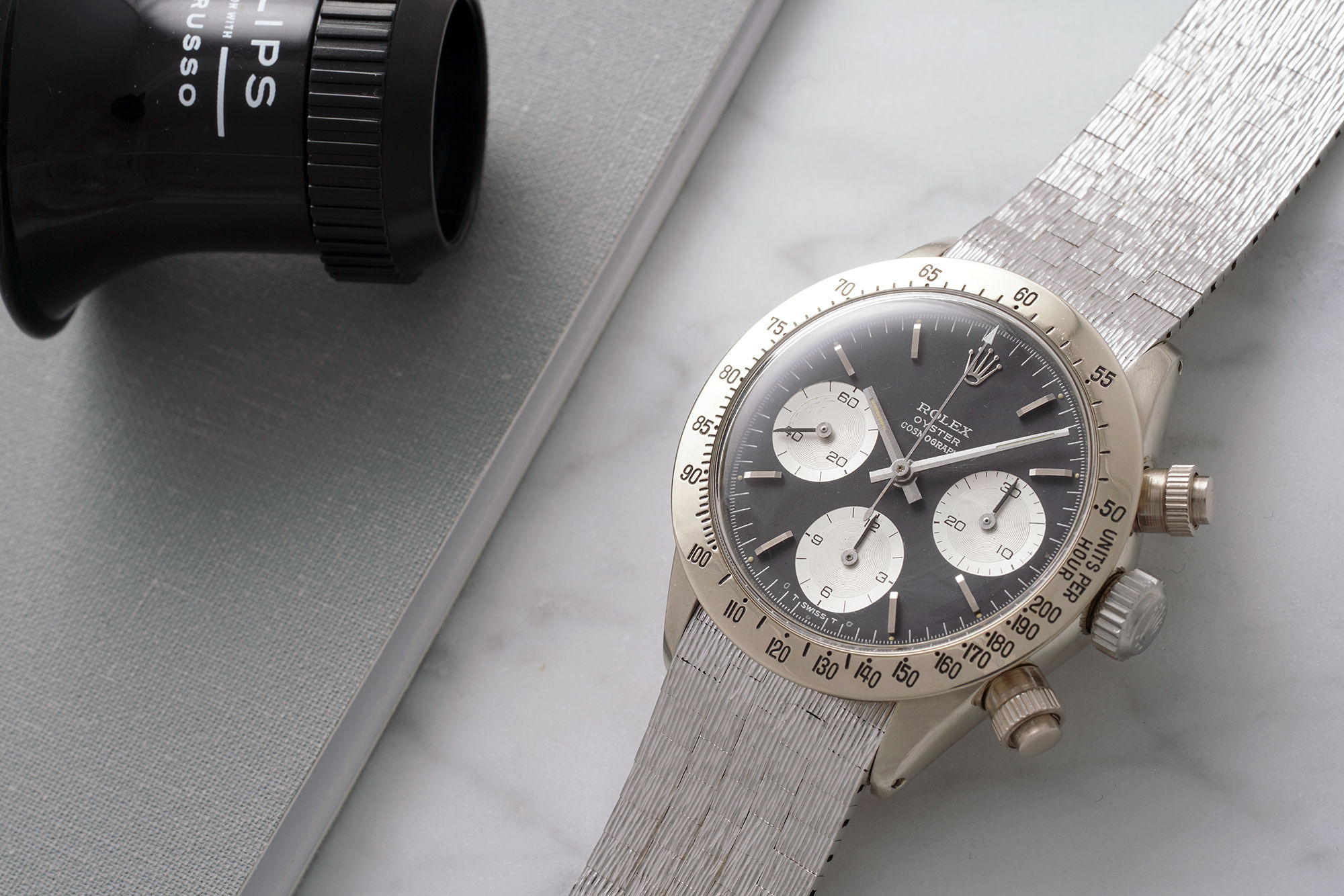 Very few watches in the world are truly one of a kind, and yet one such timepiece has recently surfaced: a white gold Rolex Daytona reference 6265. What’s more, this unique watch — nicknamed “The Unicorn” due to its extreme rarity — is hitting the auction block in Geneva this May, and it’s expected to fetch more than US$3 million. (That may sound like nothing compared to Paul Newman’s Daytona — the most expensive wristwatch ever sold, which auctioned for an unbelievable US$17.75 million last fall — but it’s not exactly pocket change, either.)

What’s so special about this watch? Some background: Launched in 1963, Rolex’s Daytona was designed as a robust mechanical chronograph, one that could withstand daily use. Accordingly, the vast majority of them were made in stainless steel, which is more forgiving than gold when it comes to regular wear and tear. Still, some were manufactured, sparingly, in yellow gold (14k or 18k) for the American market, and until recently it was believed that these were the most extravagant vintage Daytonas in existence. 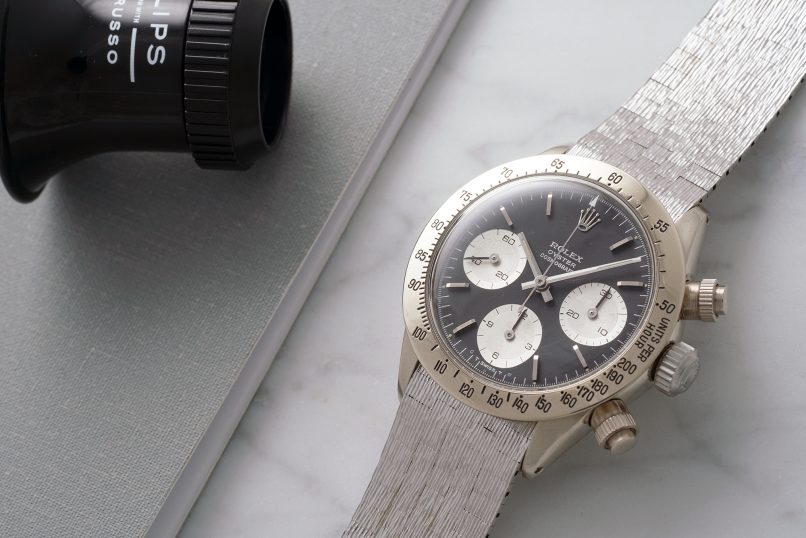 Fast forward to 2010, when collector John Goldberger stumbled across the white gold Rolex Daytona reference 6265 and knew he had something very special in his hands. Having bought and sold many a Daytona in his life, Goldberger could tell immediately from the weight of this particular piece that this was no stainless steel watch. Today, it’s believed that this is the only white gold manual-winding Daytona ever produced, making it one very special watch indeed.

Of course, it’s not as though Rolex has never made watches in white gold. In the 1970s — the decade in which this particular watch was produced — Rolex produced many Day-Dates in white gold. At the time, the Day-Date was Rolex’s most glamorous model, so it was common for it to be made with precious metals such as platinum and yellow, pink, and white gold. 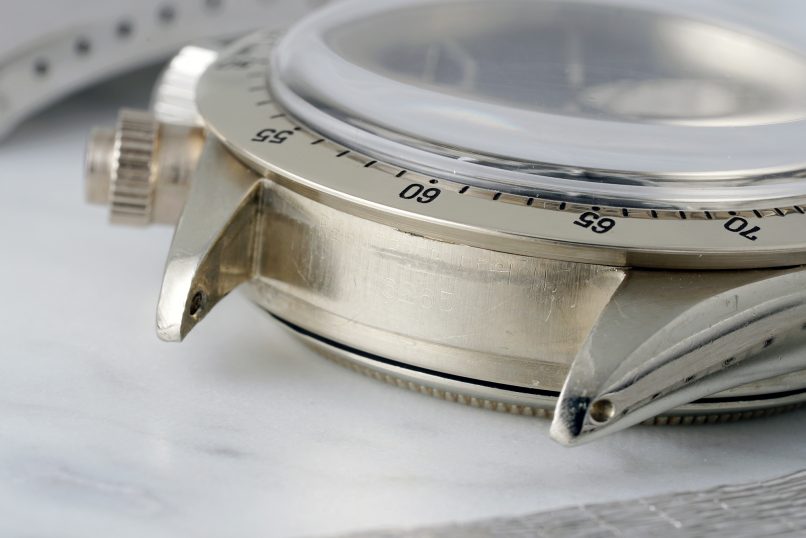 So how did a sports watch like the Daytona come to be made in white gold? No one knows for sure. Auction house Phillips’ best guess, based on other unique pieces that have resurfaced over time, is that it was a special order made by one of the company’s most exclusive clients, one with enough influence that Rolex was willing to make an exception in the way it produced the Daytona. All that is known for sure is that the watch was manufactured in 1970 and delivered to a German retailer in 1971.

Aside from the white gold case, this watch has an 18k hallmark engraved in the lugs at the back and a black “sigma” dial with white gold indexes. The crown, which is a different colour to the case and pushers, is made from stainless steel, not gold. Service marks left on the caseback between 1971 and 2010 suggest that the watch was returned to Rolex on several occasions, and in some cases, to Rolex Geneva. While it’s not known for certain whether any other pieces like this exist in the world, this is the first time such a watch has come to auction, and it could very well be the last. 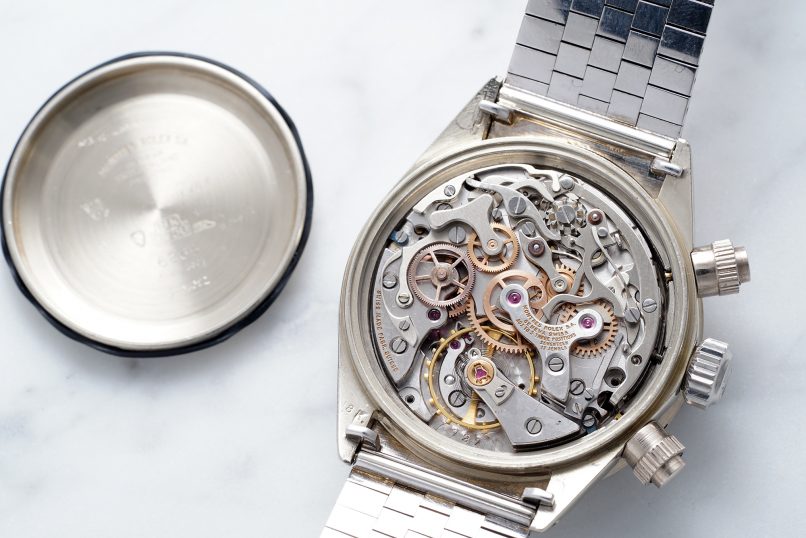 The condition of a watch may be besides the point when you consider the rarity factor, but this reference 6265 has been well maintained. The case is in excellent condition, and the dial shows few signs of ageing or tarnishing. It’s worth noting that the bracelet, also white gold, is not the bracelet that originally came with the watch. It was added by Goldberger in place of a leather strap, and comes from a white gold ref. 1507 Oyster Date. According to Phillips, “It fits the piece well, is correct for the period, and adds some gravitas to the watch.” That being said, there’s no way of knowing what kind of bracelet the watch was delivered with in 1971.

As for why this watch is heading to auction now, Goldberger has said he wants it to benefit those who are less fortunate. As a result, this reference 6265 will headline ‘The Daytona Ultimatum’, a thematic sale of 32 of the finest Rolex Daytonas ever made, taking place 12 May 2018. Proceeds from the sale will benefit Children Action.

Watches Rolex Luxury Watches Auction Auctions Rolex Daytona Phillips Phillips Auctions luxury watch White Gold Watch Auction Rolex Daytona reference 6265
Michael Alan Connelly
Head of Digital Content
A Chicagoan by birth and a New Yorker by habit, Michael has more than a decade of experience in digital publishing at leading titles in the U.S. and Asia. When he's not checking out Hong Kong's newest restaurants and bars or jet setting around the globe, you'll find him hanging out with his dog Buster and enjoying an Aperol Spritz.
Travel Hotels Restaurants Cocktails Culture Italy Art Music Cheese
Sign up for our newsletters to have the latest stories delivered straight to your inbox every week.